Aside from the lived-in aesthetic of the Nostromo -- something shared by Star Wars, both in terms of costume design (John Mollo won an Oscar for Star Wars the year before he worked on Alien) and sets -- the main reason why Alien still looks so good is because the filmmakers never tried to make it seem futuristic. As a rule, the harder you try to make your TV show or movie seem like it's set in the future, the more likely it is to look incredibly dated in twenty years' time. 1950s spaceships-and-aliens stories now seem so hilariously old-fashioned that we had to invent a whole new term for them: retrofuturism. So while everyone on the USS Enterprise now looks like they come from a universe where all clothes, hairstyles and interior decor stopped evolving in 1969, Alien still looks pretty good. You can't exactly mistake it for a new film, and some details (Ripley's hair; all the high-top sneakers) seem a little '70s/'80s, but it doesn't fall into the retrofuturism trap. The costumes definitely play into this. 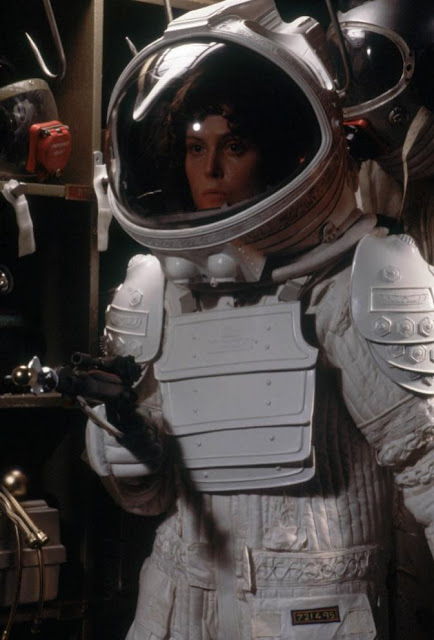 The spacesuits in Alien interest me both from a retrofuturism perspective and because of the recent announcement of a new film in the Alien saga, Prometheus. Prometheus will be the first Alien film directed by Ridley Scott since the original in 1979, and although he's claiming it's not a direct prequel, it does involve people working for Weyland (a precurser to the Weylan-Yutani/Weyland-Yutani corporation) exploring a planet that, in the trailer, looks very similar to the one encountered by the crew of the Nostromo. The trailer even shows a scene where the spacesuit-clad explorers find a Xenomorph egg chamber and Space Jockey. Now, I'll get back to Prometheus in a moment, but first let's take a look at the Nostromo's planetary-exploration suits.
These are the work suits. They give every impression of being old, unwieldy, and uncomfortable to wear. From a filmmaking perspective I'd say they're a lot better for the egg chamber scenario than a gleaming white spacesuit would be because they can blend into the soupy murk of Alien's horror/suspense scenes. Practically speaking, there's no point in wasting photogenic suits on muddy planetside work, plus these suits are designed for a different purpose than the more traditional-looking white spacewalking suit Ripley wears at the end. 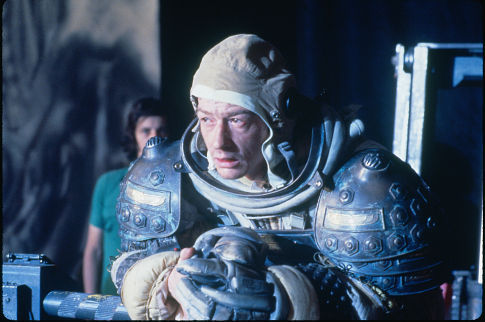 The suits worn by Kane and the others when they go planetside are really quite odd-looking. They're heavy, with a strong emphasis on durability and insulation (presumably because the mining planets they visit are often uninhabitable) and no emphasis whatsoever on looking good. The pads around the shoulders imply that they're designed to withstand rockfalls, and the padded shins would protect the wearer's legs from any rubble or sharp objects they wouldn't be able to see through the restricted view of the helmets. With regards to what I was saying earlier about futurism, this kind of design almost goes in the opposite direction, although not quite to the extent of steampunk. They're more like the outer-space equivalent of mechanic's overalls. The white suits Ripley finds in the escape shuttle, however, are very similar to the sort of space suits that were around in real life when Alien was being made.
From what I can see from the Prometheus trailer and promo pics, the suits worn by the explorers are very different from the ones seen in Alien. They're a far more modern design than the suits in Alien, but even though this film is set decades before the Nostromo landed on LV-426 you can't ignore the obvious fact that it's being made now. If they'd gone for similar level of technology and set design to a film made in the '70s it would look clunky and ridiculous, even though Alien itself still doesn't particularly give that impression. But if you feel the need to rationalise the knot of futuristic/retrofuturistic issues created by a prequel film made 30 years after the sequel, try this for size:
On a Prometheus-themed postscript, can I just say how much I love the fact that Michael Fassbender dyed his hair for this film for no reason at all? Yes, in order to play an android in Ridley Scott's new movie he definitely needed to go blond. I'm so sure.

Links
Dava Newman's streamlined "Bio-Suit". This suit was invented very recently, and I think it bears a strong resemblance to the skin-tight ones seen in Prometheus.
Retrospective of early spacesuits at the Smithsonian Museum. Here are some spacesuits from the 1960s, showing early designs prior to the introduction of the now very recognisable white suit on which Ripley's escape suit in Alien was probably modeled.
Trailer for Alien, recut in the style of the Prometheus trailer. (Purely because this is straight-up awesome.)

Continued in: The Costumes of Aliens.
Posted by Hello, Tailor at 14:16