I was extremely careful not to read any spoilers before I saw this movie, which is just as well because it's VERY spoilery. The one thing I did see beforehand was part of a review that said Jane's role was mostly to "faint on cue", which made me rather apprehensive. There's probably going to be a lot of debate over this among fans, but I personally thought the depiction of women in Thor: TDW was very good. If Jane had been the only female character, I wouldn't have been pleased by the fact that she fainted a lot, but there are four women in this movie (one more than in The Avengers, which had a far larger ensemble cast), and each of them has an important role in their own right. On the simplest level, this is how representation works: the more women you have in your movie, the more leeway you have to let one of them be "weak" -- whatever that means.

Jane's characterisation is very solid thanks to the first movie, and I appreciate the number of publicity interviews Natalie Portman has done where she talks about strength of character vs. the concept of "strong female characters". Sif is a warrior. Frigga is an witch and a diplomat and a mother, who can fight if she has to. Jane is brave and curious and smart, but she's not a fighter. Darcy is independent and fun and "normal". All four of those characters are "emotional", but not in a way that's coded to make them seem hysterical/weepy/stupid, which is often how some people interpret "emotional" female characters. A female character who faints a lot sets off alarm bells because we associate it with swooning damsels in distress, but a female character who has no weaknesses is a more insidious problem. I suppose they probably could've done better than Jane being Maguffinised for half the movie, but I think it worked in the context of her being the mortal girlfriend of a near-indestructable alien, which I can only assume will be the primary conflict in the Thor/Jane romance storyline in any potential sequels. 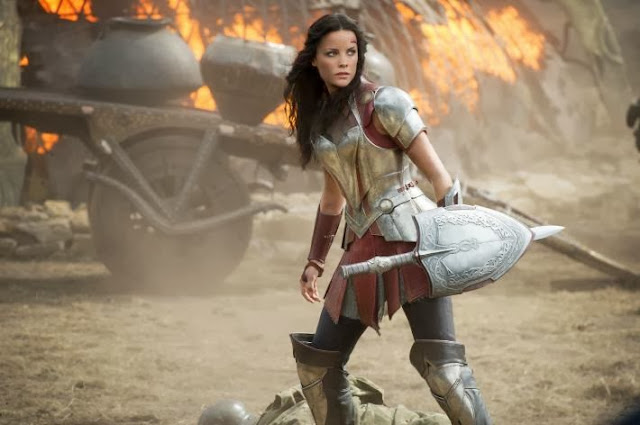 Regarding Frigga, I am SO GLAD she got a more significant role, a role that really solidifies Asgard as a patriarchal society. A patriarchal society where leadership is determined by genetics, hence Odin's desire for Thor to start looking for a ~suitable~ wife rather than the sub-standard "goat", Jane. (Thank god there wasn't a real Jane/Thor/Sif love triangle, by the way. I LOVE SIF, and a love triangle would've been a complete fiasco.) I could've done with more Frigga/Loki scenes, but overall I thought she was a really satisfying depiction of a classic "woman behind the throne" character: someone who gains power within traditional femininity, whereas Sif is the warrior who fights to be part of the boys' club. Also, Frigga's death was a rare example of a mother/wife character being killed off, but not "fridged". 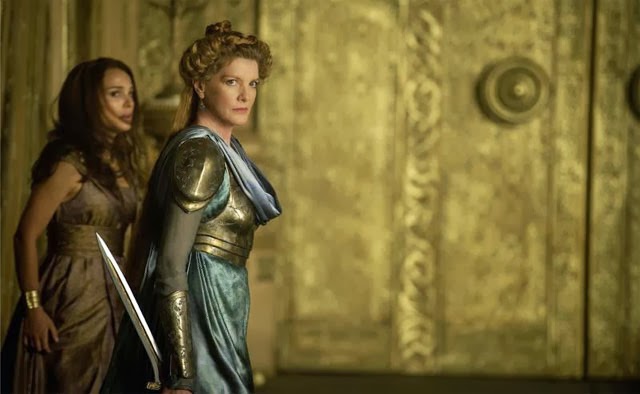 We were discussing this in the most recent episode of the Fandomspotting radio show/podcast, and everyone agreed that while we don't actually want Frigga to be dead, her death scene (and subsequent funeral) was satisfying, and definitely not an example of the "fridged female character" trope. Her funeral was one of the most beautiful scenes in the movie, and Thor and Loki's reactions to her death were engaging and complex. The difference between your average "MY WIFE IS DEAD!!" action movie and Thor: TDW is that with Thor and Loki, their reactions take into account their own personalities and relationship with Frigga, and her death wasn't immediately sidelined: it was brought into the foreground with this epic, Lord of the Rings-esque funeral. It was similar to Coulson's role in The Avengers, where a character's death is used as a catalyst to bring the heroes together against a common goal, but that dead character is developed beforehand rather than being two-dimensional or exploitative.

It's not a huge shock for a Marvel movie to be overwhelmingly white, even though Thor took a couple of baby-steps forward by casting Idris Elba as Heimdall. Still, I felt that this movie was actually a lot whiter than the first one, which is something that I don't even always pick up on unless it's pretty obvious. The thing that put me on edge in the first place was the absence of Hogun. He's introduced early on, but aside from his scene on Vanaheim he's basically benched for the rest of the movie. I originally assumed this was due to one of two reasons: either the actor was only available to film limited scenes (ie, only on the Vanaheim set), or he filmed more Vaneheim scenes that were cut from the final edit. Unfortunately, the director has recently stated that Hogun was written out for basically no good reason, which I find very disappointing. 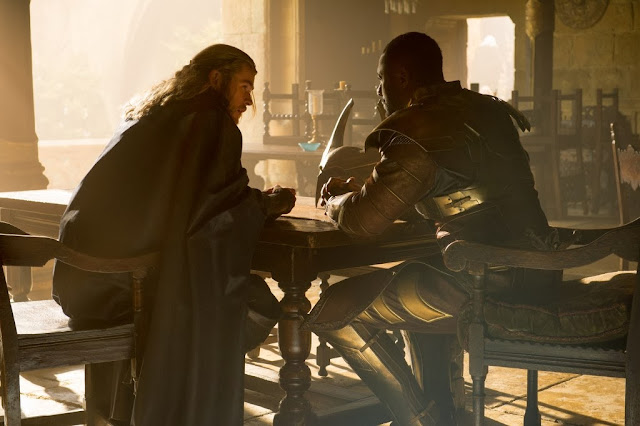 The plan was apparently give each of the Warriors Three some "individual" moments, and for one to travel to his home world to thematically mirror Thor's decision to move to Earth at the end of the movie. But I guess they chose the Japanese guy to be an outsider who comes from a world that looks like a Mongolain grassland, because... of reasons...? This just does not come across as a good choice at all. I'm not sure if he actually gets much less screentime than, for example, Fandral. But Hogun's role in this movie functionally removes him from the central action, and characterises him as an outsider while Fandral and Volstagg hang out with Thor and Sif in Asgard. I can sort of understand wanting to bench one of the Warriors Three on another planet because there are too many characters in the story, or because they wanted to introduce one of the other Nine Realms. But since both Volstagg and Fandral are comic relief characters, and Hogun is one of the few non-white people in the movie, it was a bad decision to leave Hogun behind.

The eventual result is that of the three significant people of colour in Thor: TDW, Idris Elba gets an awesome role while Hogun vanishes offscreen and Christopher Ecclestone's elf husband puts on a mask on and turns into a giant beast-monster for the last two thirds of the movie. Collectively, this doesn't look great -- particularly when coupled with the addition of two extra white dude characters in the form of Richard (Jane's date, who I really enjoyed), and Ian the Intern. I don't have anything against Ian as a character, but his main purpose was to provide Darcy with someone to talk to, making him a perfect example of when casting just defaults to a generic-looking white man for no good reason. This kind of thing is particularly frustrating because in an ensemble movie like this, it shouldn't be hard to cast a more diverse range of side-characters, even when you're carrying over a predominantly white cast from the first movie. It came across as lazy writing and casting, and soured my opinion of a movie that I otherwise loved and found very entertaining.

Out of all the Marvel movies, Thor and Thor: TWD are the best at illustrating complex emotional themes and depicting interesting, human characters outside of the central superhero/love-interest duo. So it's all the more noticeable when they fail at racial diversity. Right now, my goal for Thor 3 is for it to be an Asgard/Nine Realms buddy movie, where Jane and Darcy get to come to Asgard. Thor, Hogun, Sif and Fandral go on adventures, while Volstagg stays home to cook and take care of the kids. Loki is partially redeemed, culminating in a Thor/Loki hug where at least one of them cries, and there's a subtle undercurrent of Sif/Loki romantic subtext throughout the movie. Also, someone makes an STD joke about Fandral, preferably Hogun. Ian disappears without trace. Perfect.