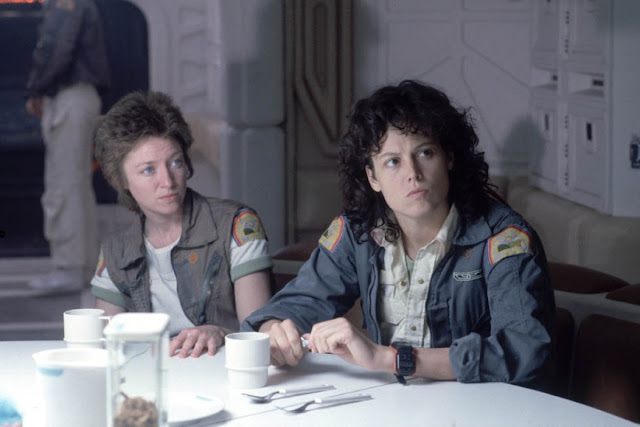 The thing that immediately won me over when I first saw Alien was the fact that the characters are so obviously people rather than the sort of cleanly-drawn caricatures favoured by many sci-fi and horror movie writers. Even disregarding my personal dislike of overt exposition, the practise of introducing characters by one or two defining characteristics doesn't exactly lend itself to realistic storytelling.
There's a certain formula for these things -- the hero, the antagonist, the authority figure, the comic relief, the love interest -- but for the first third of Alien it's not even clear who the main character is. We know it's Ripley because she's a geek-culture icon with a decades-old franchise behind her, but if you went into Alien with no foreknowledge of that then for the first half-hour or so it'd probably seem more like an ensemble movie than a hero story. Which is perfect, because real life is rarely a hero story. If not for the catalyst of the Xenomorph making its way onboard, the crew of the Nostromo would be nothing more than a selection of individuals who don't really know or care much about each other, working together before going their separate ways. 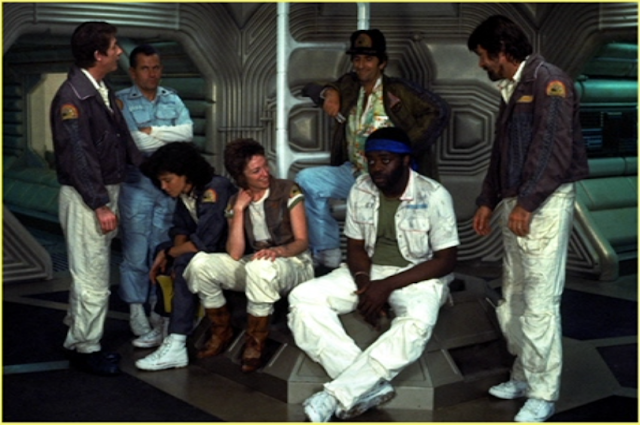 The actors were all given character backstories, but we never see much of that onscreen. The crew of the Nostromo are, for the purposes of the movie, like any group of people who work together doing uninspiring jobs that they neither love nor hate. This isn't the USS Enterprise, and Captain Dallas is more of a line manager than a heroic leader. What one must remember is that for most of their time together, the crew are meant to be in stasis. They interact with the impersonal jocularity of people who know they're going to be stuck together for a while so it's best to keep a bit of distance. Thanks to the film's admirable restraint when it comes to expository dialogue, we don't learn much about "The Company", Weylan-Yutani, except from the general impression that it's the sort of faceless corporation that rules and ruins the little guys' lives in everything from Blade Runner to Firefly.
The main impression I get from the costumes is that while there's a uniform, it's not a hugely strict one. The crew seem to have been given a few stock items of Weylan-Yutani gear each: overalls, tough white cargo trousers, jackets, and sneakers, but nobody is wearing exactly the same outfit as anyone else. It's not as if the crew are on show to the general public so it's likely that part of the reason why they have to wear a uniform is in order to give a sense of unity with the Company, which is exactly the kind of low-level corporate brainwashing technique I'd expect in this setting. They literally have their employer's signiture stamped all over them, along with the more specific Nostromo badge and a few more personal marks like American or British flag badges. The crew all have very specialised skills that mean that it's likely they can only work on this type of freighter/refinery ship, so it's not surprising that their feelings towards their corporate overlords are rather mixed. They even get paid in Weylan-Yutani stocks. So they wear the uniforms, but each of the crewmembers modifies theirs to show a little individuality.
Brett and Parker have the messiest uniforms because they combine having the most hands-on jobs (engineering) with having the least respect for the authority of Weylan-Yutani. Brett is lowest on the pecking order and this, coupled with the fact that Harry Dean Stanton is the kind of actor you hire when you want to make it abundantly clear that a character has not had an easy life, indicate to me that living up the uniform standard is never going to be high on Brett's list of priorities. My favourite detail from Brett's outfit is his hat, onto which he's sewn his Nostromo patch. My own theory is that he kept being told to take his hat off but everyone has to be wearing a Nostromo-branded item of clothing at all times so he sewed his patch onto the hat and voila, they couldn't tell him to take it off any more. Fight the Man, Brett!
Brett's uniform modification is a Hawaiian shirt; Parker's is a headband; Lambert's (pictured earlier) is a pair of cowboy boots. The fact that each crewmember only has one or two personalised items on their outfits implies to me that they don't get to bring many of their own possessions onboard, although another possibility is that they just don't want to bend the uniform rules too much and risk a reprimand.
It's not clear how long the other crewmembers have been working together and in what combination, but it becomes apparent quite early on that Ash is an outsider. It's not much of a surprise that his uniform is the neatest and most buttoned-up of the crew, both because he's the Science Officer and because of his general personality and demeanour. But Ash must be judged differently from the other characters thanks to his dual role of Science Officer and android infiltrator on orders from The Company. The way he presents himself is a calculated move to make the crew think he's a normal human. Compared to everyone else his appearance is oddly formal and neat (and, with the shirt tucked carefully into his trousers, implicitly less blue-collar), which I'd say is a result of his own tastes and personality, although the clothes themselves are just as worn as that of the other characters. I love this detail, because while the worn-in aesthetic of the Nostromo is one of the film's defining design themes, there's a possibility that Ash's costume is nudging a little towards the fourth wall: his uniform must have been purposefully worn-in in order to blend in. And he really doesn't look very comfortable. It's like the difference between wearing a pair of jeans until they're threadbare and faded, and buying a pair that's been pre-distressed.
As the captain, Dallas has to hold himself to a higher standard than the others. There isn't as much of a distinction between the officers and the lower ranks as there might be on a more military vessel, but it's still pretty obvious who's boss when Parker and Brett voice concerns about command decisions. It's a small enough crew that Ripley and Kane's position as officers (to a certain extent -- the chain of command isn't set out very obviously) doesn't matter overly much, but they still follow the Captain's lead in terms of presentability. Ripley's appearance reflects her status as a rather unconventional protagonist for a sci-fi or action movie, ie that she's sensible and is more of a "rules exist for a reason" kind of person than the heroic mavericks one often sees in this type of role. She's not stern but she's not particularly frivolous either, and her practical nature is revealed in the fact that she doesn't bother adorning her overalls, which are simple and worn, but clean. 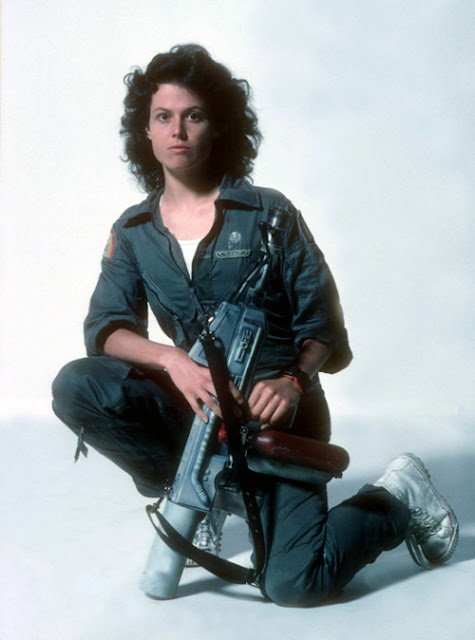 At the beginning of the film Ripley adheres to protocol more than most of the other characters, pointing out that it's dangerous to bring Kane straight into the ship and risk contamination. But as the story progresses it become more obvious that she's not a blind follower of rules: she follows protocol because it's the sensible thing to do, in context. Once the situation becomes more desperate, she has no problem doing whatever it takes to stay alive, and that's highlighted by her gradual physical deterioration as one by one the other crewmembers are picked off. She begins as an an ideal employee, well turned-out and obedient to the rules and structures of her job, but once she learns that Weylan-Yutani are far worse than the faceless but ultimately innocuous corporation they originally seemed, she quickly dispenses with the rulebook and the uniform. The film closes with her in her underwear, stripped of any distinguishing marks and floating peacefully through space.

Continued in Part 2: Space suits, retrofuturism, and Prometheus.
Posted by Hello, Tailor at 14:34