The costumes of Stoker: A vampire movie without the vampires.

I've been watching a lot of Hannibal recently, and I've come to realise that Stoker could be the origin story for a female analogue to Hannibal Lecter. While there are plenty of psychotic male antiheroes out there, India Stoker is a rare breed: an ambiguously amoral female character who isn't depicted as a bitch, a slut, or a straight-up villain. Like Hannibal, Stoker is a vampire story without the vampires.
Stoker begins with the kind of premise that I generally find depressing: a mother/daughter love triangle, with the mother envying her daughter's youth. In this case it's Evelyn Stoker competing with her daughter India, who in true cliche spirit is "on the cusp of womanhood". Following the death of India's father Richard, long-lost uncle Charlie shows up at the funeral. Exploiting Evelyn's loneliness and India's sulky passivity, he moves into the Stokers' huge country house where he begins seduce both mother and daughter -- in very different ways.

Star Trek Into Darkness: Too many dicks on the Enterprise.

[From my Star Trek Into Darkness article at The Daily Dot.]

In 2009’s Star Trek, JJ Abrams successfully made the effort to appeal to new viewers as well as dyed-in-the-wool Trekkies. This time round, he seems to be going further afield— and alienating the original fanbase entirely.

The publicity for Into Darkness has been solidly high school: Don’t worry—it may be Star Trek, but it’s not for nerds anymore! In an interview with Jon Stewart this week, Abrams made it very clear that he’d never liked the show as a kid, because it was “too philosophical.” “I stopped listening when you said you didn’t like Star Trek,” Stewart joked. “I saw your mouth moving, so I assume you apologized.”

It’s not actually necessary for a director to be a lifelong fan if they want to make a successful adaptation. In fact, JJ Abrams’ first Star Trek movie was proof of that. But it’s another thing for an adaption to leave most of the original show’s values in the dust, which is what Into Darkness seems to be doing. The dialogue is snappy, the action sequences are fun, and the characters seem real enough, but the heart and the brain are now gone.

In 1966, Star Trek broke new ground with its international crew of hopeful explorers, scientists, and adventurers. True, the show was full of heavy-handed Cold War metaphors and casual 1960s misogyny, but its central messages were obvious: Racism is bad. Give peace a chance. That kind of thing. Men and women, Russians and Americans, aliens and humans: all could work together on a more-or-less equal footing. For many viewers, Nichelle Nichols (Lieutenant Uhura) was the first woman of color they’d seen playing anything other than a maid. Star Trek was pushing the envelope.

I interviewed the Star Trek Into Darkness costume designer for Wired.com! You can read it here.

Since Star Trek first made its way to the big screen, its costume design has veered away from the classic color-coded uniforms in favor of experiments with red double-breasted uniforms and unfortunate flesh-colored jumpsuits. But for the 2009 J.J Abrams Star Trek reboot and its recently released sequel, Into Darkness, costume designer Michael Kaplan helped move the sartorial stylings of the Enterprise crew forwards by looking backwards–at the trusty old red, blue, and gold. It’s a comfortingly familiar detail amongst Abrams’ trademark lens flare and glowing spaceship interiors: a conscious chromatic nod to the vintage style of the original costumes. 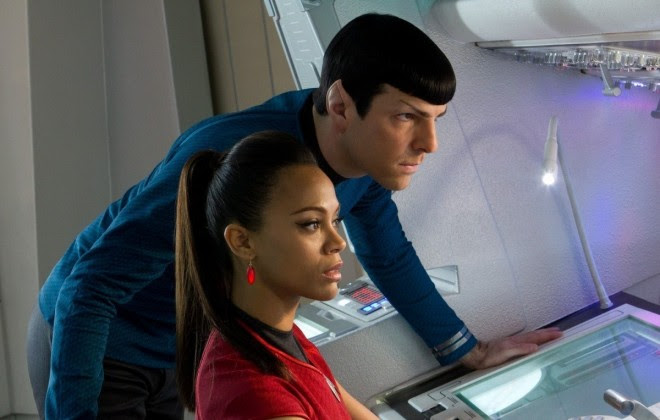 “I wanted the film based in the ‘60s,” Kaplan told Wired. “Not literally the ‘60s, but I wanted my thinking to be grounded in the concept of the original Star Trek, almost like an homage…. I had a lot of books in my library that I’d consult: [André] Courrèges [inventor of the mini-skirt], designers like that. To keep things rooted in that, even if when you look at the movie, you don’t say, ‘Hey, this is the early 1960s.’" [READ MORE]

The evolution of the Star Trek uniform.

Just in time for the new Star Trek movie, I wrote this article for Empire Online! It follows the original series Starfleet uniform from the 1960s to the present day -- but don't worry, there aren't any spoilers for Into Darkness. You can expect a post about that sometime next week, after the US release date. :)


Even Star Trek’s most devoted fans wouldn’t dare claim that the original series was a high-budget operation. In among the cardboard sets, guest stars had to wear a selection of costumes that ran the gamut from the baffling (an evil baby in a silver lamé toga; girls in hot-pink fur bikinis) to the plain ugly. In one early episode, an entire alien species is kitted out in a vaguely familiar fabric that one later realises is also used for all the bedspreads on-board the Enterprise.