I'm a big Hellblazer fan, so I've been looking forward to NBC's Constantine with trepidation. Is it going to be any good? Well, no. Hellblazer is not well suited to the formulas and restrictions of US network television. But I'm a glutton for punishment, so I'm going to keep watching.

Predictably, I wasn't exactly blown away by the pilot episode's combination of stilted exposition and occult horror cliches. That being said, a pilot is a pilot is a pilot. It's entirely possible that this show will improve later on. In the meantime, I'm gonna do one of the worst things a TV critic can do: over-analyse a show based on its inevitably simplistic first episode. 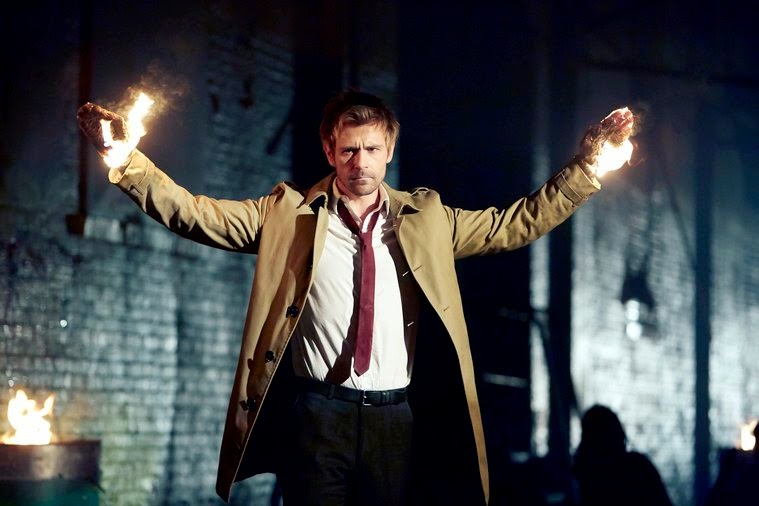 We begin with an origin story that will be familiar to Hellblazer fans: John Constantine in a mental hospital. He allowed a young girl to be killed and dragged to Hell by a demon, so now he feels bad. And for whatever reason, that leads to electric shock treatment. Everything else in the episode will feel familiar even to new viewers, thanks to its solid basis in cliché. Daddy issues, a Dark Past, and a young woman (Liv) who needs the protagonist's help -- it's all there, and it all progresses more or less as expected.


"You do that a lot, you know," says Liv. "Deflect emotions with humour. Like the morally ambiguous male lead of a TV show." #Constantine
— Hell Tailor (@Hello_Tailor) October 25, 2014

Having saved the girl and confronted his literal/figurative demons, Constantine ends the episode with an embarrassing voiceover monologue while wandering the city at night. So noir. "I'm the one who steps from the shadows, all trenchcoat and arrogance," he says, like a 14-year-old boy trying to sound cool. Not exactly Shakespeare, but it adheres to my expectations for mainstream US drama pilots, which generally consist of characters explaining things to each other in very plain terms.

The biggest disappointment was that they hired the excellent Neil Marshall (Dog Soldiers, Doomsday) to direct an episode that could never be much above mediocre. I hope he comes back later in the series, to work on something a little more interesting. He's a perfect choice for this show, and honestly they need all the help they can get.

I’m in Seattle for Geek Girl Con this weekend! I’m doing two panels and a talk about superhero costumes — please come along! :D Here’s my schedule. (The superhero costume design talk is probably the most relevant to people who read this blog: 3pm on Sunday in room LL2.)
SATURDAY
3pm: “21st Century Boys: Slash in the Mainstream”
“Today, male/male slash is the predominant form of ‘shipping in online fandom. Growth of slash and femslash has spawned new problems: exploitation of ‘shipping by media; the push to make fanfic “publishable”; and the ongoing struggle to translate fandom’s feminism, diversity, and push for queer pairings into increased media representation.”
5pm: “Fandom and the Media”
This panel is basically me and several other fandom/geek culture journalists (Lauren Orsini, Aja Romano, Versha Sharma, Lisa Granshaw and Amanda Brennan) discussing our experiences in the field, and talking about what it’s like to report on fandom news when you yourself are a fan.
SUNDAY
3pm: “Evolution of the Superhero Movie Costume”
I’m doing a 45-minute talk about how superhero movie costumes have developed over the years, and why. If you like my blog posts about superhero movies, hopefully you’ll enjoy this!
Posted by Hello, Tailor at 11:15 3 comments:

I recently recorded a podcast about Captain America: The Winter Soldier for Filmoria, along with Rebecca Pahle of the Mary Sue, and Grace Duffy and Lesley Coffin, both of Filmoria. Regular HelloTailor readers may already have read quite enough about this movie, but on the off-chance that you're still interested, you can listen to the podcast here on Soundcloud! I'm still fascinated by this movie, and we all had a great time discussing it at length. :D