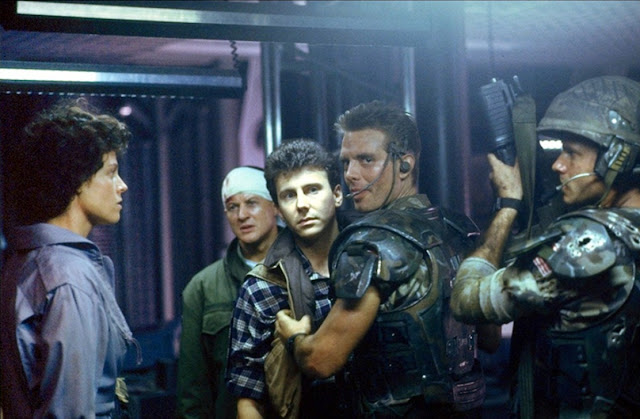 I love the fact that the cast were told to read Starship Troopers in preparation for filming, since the infamously schlocky movie adaptation of that novel is more a parody of Aliens than anything else. All the uber-American shouting of "Let's go kill some bugs!"? The locker-room teasing? Soldiers being deployed onto dangerous alien planets with nothing more than some worryingly 20th century-looking body armour? It's a recipe for disaster -- AKA a recipe for a successful action movie, because it gives you all the violence, tension and team bonding of a war story with none of the ethical qualms of watching people kill each other over some morally-ambiguous idealogical dispute.
As another part of their pre-filming homework, James Cameron had each of the actors playing marines decorate and personalise their own uniforms, both in homage to images he'd seen of soldiers during the Vietnam war, and presumably so as to make the characters easier to tell apart onscreen. The actor playing Vasquez painted her body armour with the slogan "The risk always lives", which she'd taken from a book of Chicana poetry she'd been reading at the time. Drake, Vasquez's partner in having an egregiously huge pivot gun, has chicken bones tied to his hat. Bill Paxton, who played Hudson, wrote Louise on his body-armour in honour of his wife. The squad's ineffectual leader, Lt. Gorman, instantly stands out as a stuffed-shirt thanks to his clean and rule-abidingly unmarred uniform.
The result is that the supposedly uniform, unified force of marines actually look far less official than the civilian "space truckers" of the previous film. The impression I got from Aliens is that the marines are less of an official army unit as we'd know it, and more like a security firm hired by Weyland-Yutani to wave big guns at people who seem like they might cause trouble. After all, who is the government? The United States namechecked by the United States Colonial Marine Corps but never heard from again? Or Weyland-Yutani, who are the first people to contact Ripley when she wakes up after her 57 years of hypersleep, who built the colony at LV-426, and who sent Ripley and the marines on their mission to explore it?
Waking up after decades of drifting through space, Ripley is alone, she's traumatised, and the world has completely changed. For the first few scenes when we see her on the Gateway Station, she tends to be dressed in clothes that emphasise her vulnerability -- first her hospital scrubs, and later on a bathrobe when Burke comes to visit her in her quarters. Her nightmares wake her up every night, and she's a far cry from the competent Ripley we know from the Nostromo. 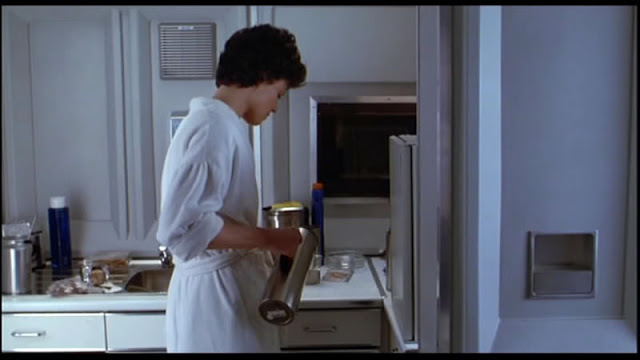 The first major transition occurs when Ripley begins to take charge on LV-426. She's still set apart from the marines, wearing blue overalls similar to those she wore in the first movie -- no longer a mandatory uniform, but a comfort during a situation where everything else is so different and frightening. The leather bomber jacket adds a touch of badassery, plus it makes her look less like a skinny mechanic hanging out with a bunch of huge, armour-clad space marines. 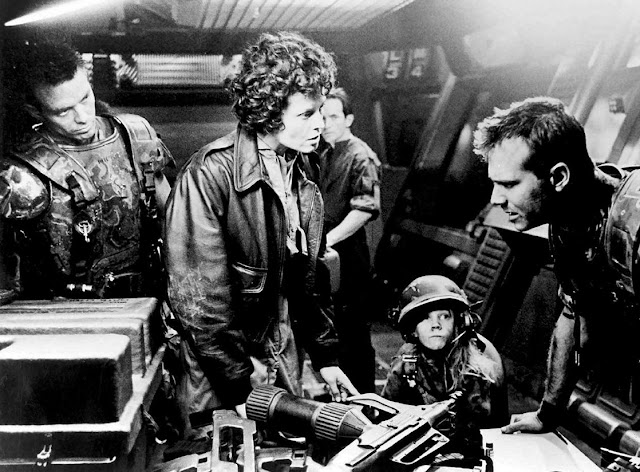 For all that Aliens is a film about soldiers, the fact that Ripley isn't a soldier is her main asset. Viewing the xenomorph threat both as a civilian and as the only person who's encountered one before, she's the only character aside from Newt whose priorities aren't skewed by military conditioning or personal geed. Sigourney Weaver herself is very much anti-gun, which I think shines through in Ripley's character. For all that she ends up brandishing a flamethrower, she's someone who, after finding out that she can keep her head in a crisis and survive through tremendous violence and destruction, gets a job driving power loaders rather than pursuing a life of heroism.
The reluctant hero is a trope with a long and tedious past, but Ripley is up there with John McClane in Die Hard in that she's not some mythical "chosen one", she just tries to lead a normal life until circumstances force her to pick up a gun and start saving people. Watch her face during this movie, it's hilarious: there are countless moments where the marines will be discussing some idiotic plan while Ripley stands in the background looking absolutely horrified that anyone could be so stupid, gearing herself up to step in and solve the problem for them. So her costumes, free of weaponry and body armour right up until the final scenes, support this image of her as the civilian outsider, the unwilling participant in what she already suspects is a suicide mission. 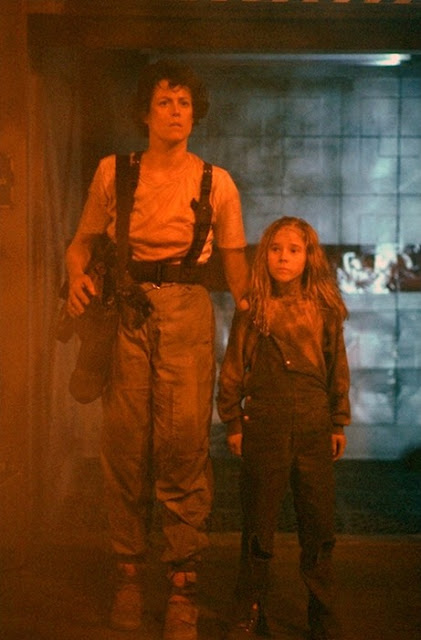 Ripley and Newt's costumes, both jumpsuits, mirror one another, a visual hint towards the maternal bond Ripley forges with Newt as the film progresses. Newt is one of the very few child movie sidekicks that I don't find irritating, partly because of her lack of shrill stage-school precociousness (unsurprising, since she wasn't a professional actress and Aliens was her only film) and partly thanks to her relationship with Ripley. I don't understand how this film can have been released in 1986, yet still be the best example I can think of when it comes to action heroines whose emotions aren't portrayed as weaknesses. It seems blindingly obvious that a thriller is more gripping when there's more at stake, but while Ripley juggles panicking space marines, murderous aliens and a newly-adopted child, most action stars nowadays are still motivated by the good ol' invisible wife or daughter being either kidnapped or assassinated in the first act, leaving the hero to run around shooting things for two hours.
Aside from Ripley, Burke may well be my favourite character in Aliens. He's just so perfectly unlikeable. From the moment he first appears onscreen, it's immediately obvious from his demeanour, his soulless management-speak, his hair, and yes, his clothes, that he's every 1980s stereotype of a spineless corporate worm. Weyland-Yutani are so influential that it's far more effective for their power to be shown second- or third-hand rather than having some CEO show up onscreen. Burke's amoral yuppie scheming was the perfect way to develop on the first movie's portrayal of Weyland-Yutani without having to throw in too much exposition. You already know he's a dick. Look at him! His neat tie! His popped collar! Compared to the thoroughly blue-collar characters we're familiar with from Alien, he's very obviously The Man. 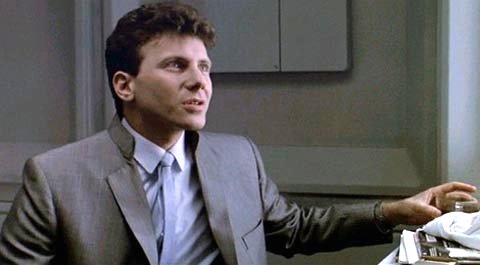 Anyone who's been reading this blog for more than five minutes will probably know that I love both suits and sci-fi. When the two meet, I tend to pay attention. Science fiction set in the near future and/or in space (ie... most science fiction) tends to have a bit of a problem with suits because they're an easy way to let audiences know someone's stuffy and/or going to a formal event, but it's kind of implausible to suggest that people will be dressing the same way in 100 years time as they are today. The happy medium is some type of suit that looks recogniseable but with some significant alteration. Firefly manages this quite servicably, with collarless and lapel-free suits, but Aliens remains in keeping with it's generally un-futuristic costume design with Burke's auto-popped collar: the universal signal for entitled douchebaggery. As I said: perfect. 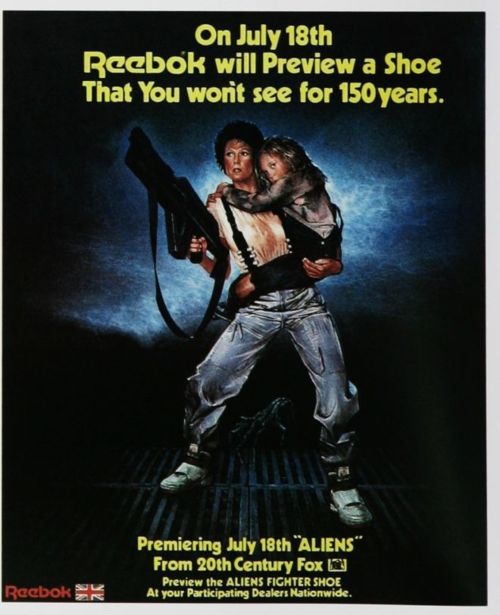 It kind of slays me that the shoes worn by Ripley (and, I think, Bishop) in Aliens are Reebok tie-in merchandise. I mean, that more than anything illustrates how much of a Hollywood blockbuster this film is when compared to the slow-paced, adult thriller that was Alien. Quite apart from that, this Reebok ad was based on the real Alien poster -- ie, a poster for a sci-fi action movie that depicts two female characters, both in mud-covered overalls. When was the last time that happened? Ever?
Posted by Hello, Tailor at 07:52