This show was very important to me for two reasons: 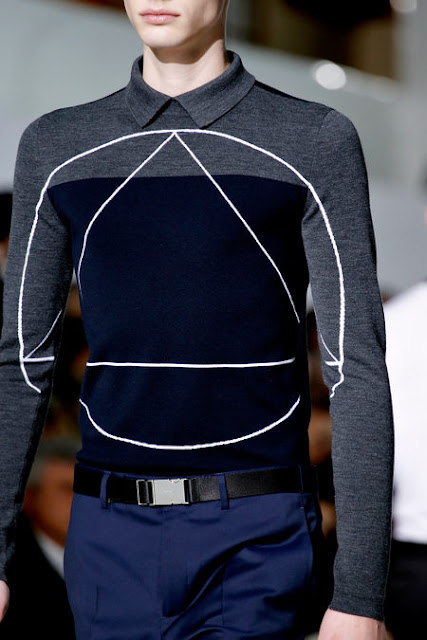 Ferociously minimalist suits are a major area of interest to me. From what I've seen so far, the extremely pared-down, knife-smooth suit is a main fixture this season -- and before you point out that at least 50% of Menswear Fashion Week is always grey suits: yes. I know. I'm aware that this distinction isn't necessarily important to everyone, but I tend to home in on every infinitesimal alteration made to the overal generic suit pattern. And as for the whole Illuminati thing: read on.

Chanel's Mary Queen Of Scots collection last season was fantastic, so I can only assume that Karl Lagerfeld used up his yearly quota of awesome on that one. Bearing in mind that this is a Couture show, one would think that it would be better than Pre-Fall. Not so. Instead, the theme (Weimar Germany... something...?) was unclear at best, and totally absent at worst As a kind of psychological palate-cleanser, I'm going to start this post with the ugliest outfit of the show, just so we can get it over with and move on to better things: 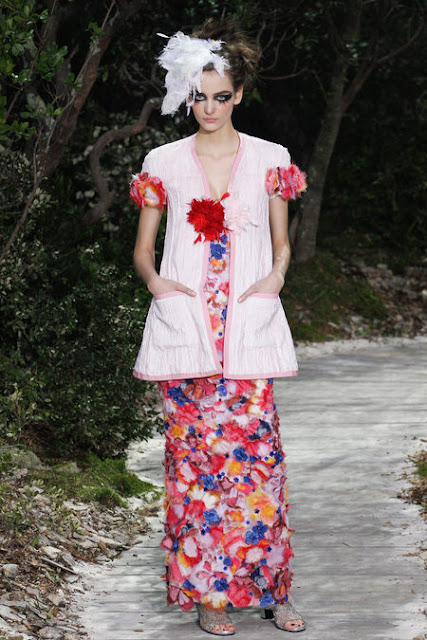 This looks like someone put a bunch of lei garlands in a blender, spackled them all over a tube dress, and accessorised it with an apron jacket worn by a Midwestern housewife in the 1980s. Karl Lagerfeld, what were you thinking?

As is often the case with Alexander McQueen, it was very difficult for me not to include every single outfit in the collection. This was a show so beautiful that the background for the lookbook photoshoot had to be blank, because anything else might have run the risk of overpowering the beauty of the clothes. Plus, the austerity of a whitewashed backdrop fit in with the puritanical theme.
And when I say "puritanical", I don't mean that metaphorically. This season, Sarah Burton took her inspiration directly from priestly vestments, nuns' habits, and the severe black outfits of the Puritans. Featuring everything from medieval robes to 17th-century style buckled shoes, this collection was dramatic while still remaining entirely serious throughout.

All three of the following labels appeared in this year's MAN show, an initiative partly funded by Topman to help up-and-coming British menswear designers. I hadn't heard of any of them until today, but I expect at least one of them will make it big in the next couple of years. Perhaps I'm overthinking things, but it seemed to me like each of these three labels represented one of the tenets of Topman's success as an affordable fashion mainstay: Agi & Sam as the dapper traditionalists, Astrid Anderson for larger-than-life street style, and Craig Green representing the cutting-edge trend junkies.

Agi & Sam
Agi Mdumulla and Sam Cotton's ideal client is, apparently, Ace Ventura: Pet Detective.
Their muse this season is Alexander George Thynn, seventh Marquess of Bath, which at first made me go "oh no" because shows inspired by British aristocrats are invariably dull and/or baffling. But then I googled Alexander George Thynn, and wow:
TOTALLY VALID CHOICE OF STYLE ICON. I'm now kind of disappointed the show doesn't look more like him, because he's clearly an incredible role model if you want to look like a walking stained-glass window and/or cartoon magician.

I am now 99% certain that the writers of Elementary are embroiled in some kind of competition to out-ridiculous one another. This episode was silly enough when two of the primary characters were (spoiler alert...?) revealed to be Russian spies, but once Holmes uttered the immortal line "Are you familiar with the concept of invisible ink?" -- Well, that was the point where the top of my head slid off and moths flew out of my brain-hole. 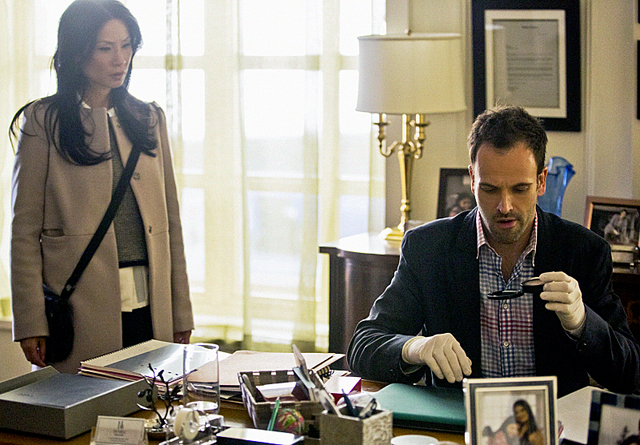 As Elementary crime plots go, this episode was relatively easy to understand. The various nebulous elements of "not-for-profit brothel", "suburban Russian spies" and "dishwasher murder" were all rather beyond the pale, but at least the finished product was more comprehensible than that one episode with the private jet crash conspiracy and the diabetes medication. To be fair, a certain amount of ludicrousness is almost a requirement for a classic-style Holmes mystery, as evidenced by such stories as The Redheaded League. The difference being that while The Redheaded League was appropriately satirical of Victorian London society, a TV episode about undercover Russian spies in the Westchester suburbs seems more like something from a 1970s sitcom than a contemporary crime show.