SPOILER WARNING: There are spoilers for Thor: The Dark World throughout this post!

I recommend watching this movie back-to-back with Thor, as it really emphasises the way the two stories shift from personal character journey to sweeping epic. I watch A LOT of superhero movies, but this was probably the best graduation from origin story to sequel that I've seen so far. Thor is purposefully the reverse of your typical superhero character arc because instead of struggling with superpowers and learning how to become a hero, he's learning how to be a fallible human and not have superpowers. Even the obligatory daddy issues are far more interesting than usual, because Odin is an actual character rather than a long-dead ghost or an avatar of lofty paternal expectations.

Thor's unusually well-drawn characterisation means that there's a solid base on which to make The Dark World a sci-fi/fantasy epic with an ensemble cast, instead of just another superhero movie where the central character hits Bad Guys until they give up. I was also pleasantly surprised by how complex it was -- not that I'm suggesting it's a particularly deep and meaningful cinematic work, but more that it was one of the most unpredictable (and rewatchable) superhero movies I've seen so far. If you look at the Thor-Loki arc over the course of their three movies together, Thor is about Loki running rings around everyone because they're all straight-shooting warrior types. The Avengers is about Loki finally meeting his match, in the form of Black Widow (intellectually) and the Avengers themselves (because Friendship and Teamwork triumph over Evil, obviously). Finally we reach Thor: TDW, in which Thor has learned from his mistakes and manages to fool Loki himself.

I don't need to tell you what a gift Loki is as a character, but he's also a solid argument against the concept of disposable villains. The only comparable relationship is Charles Xavier and Magneto, but you don't really see them change to accommodate one another (partly thanks to the current chronology of the X-Men series), whereas you really see Thor getting smarter and more canny over the course of his three appearances so far. Not that he's smart enough, of course. Loki's triple bluff is a thing of beauty. But I loved the way the movie briefly turned into a heist story halfway through, with Thor and the Warriors Three orchestrating their elaborate escape plan.

Unless you've got Lex Luthor in your movie, villains are always the weak spot of the superhero genre. Villains, and the inevitable final battle sequence. (I'm looking at you, Iron Man, Captain America, every Spider-Man movie, and the final 14 hours of Man of Steel.) Luckily, this series has Loki, one of the most satisfying antagonists in recent blockbuster history. Any additional villains are basically window dressing by comparison, which is just as well because the clunkiest aspect of TDW was definitely Malekith, the Aether, and their attendant exposition scenes. Poor Christopher Eccleston. I don't have any particular problem with MacGuffins in general (after all, the entirety of Lord of the Rings is founded on a MacGuffin), but I suspect this movie may have suffered from cutting out some excess Malekith scenes along the way. He just wasn't very engaging. But even though Malekith was little more than a force for mindless destruction, that whole problem was obliterated by the presence of Loki and Odin.

In Thor, Odin was a pretty terrible father, but in a way that wasn't explicitly pointed out to the audience. Fans on Tumblr are definitely aware that Odin is a dick ("One day... one of you will be King, my sons." The Hunger Games of parenting!) but I'm reasonably sure that most average viewers just wrote him off as Anthony-Hopkins-as-Zeus. So I'm very happy that this time round, it was obvious that he's not a good guy at all, and not necessarily even a good king. Thor has matured beyond him, and thus Odin has become a kind of benevolent antagonist. In this context, having Malekith as a kind of ticking time-bomb in the background actually simplified the film and brought the interesting stuff (ie, Loki) into the foreground. 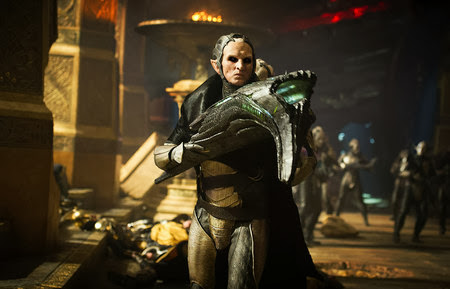 I'm quite surprised by this film's mixed reviews, because I felt that Malekith and the Aether was really its only major weakness. Looking at Rotten Tomatoes, a lot of the negative reviews seem to be thanks to superhero fatigue, which is fair enough because your average professional film critic is not as excited about Marvel movies as I am. However, not only did this movie mostly abandon the typical superhero formula, but it included something that's usually deemed far too complicated for the genre: multiple characters with conflicting yet believable motivations. Usually the most you can hope for is an ~ambiguous villain~ like Magneto, or Batman struggling with the moral dilemmas of vigilante justice. I find it baffling that last year's mediocre Spider-Man reboot received more positive reviews, when it followed the superhero formula to the letter, and was riddled with plot holes.

Another reason why rewatching Thor beforehand was so rewarding is that you get to see Loki's transformation in full. Thor's character development is, obviously, excellent, helped along by Chris Hemsworth being unfeasibly likeable in the role. But with Loki, the changes are beautifully drastic. In Thor, Tom Hiddleston is playful, childish, and overly emotional. He's an angry emo teenager who tries to burn down the school because nobody understands him. But since The Avengers, Loki has transformed into an exhausted, crazy-eyed murderer with papery skin. He's gone from being a doe-eyed sylph to a frazzle-haired angstbucket with a penchant for stabbing. It's beautiful. And, of course, he's an absolute scene-stealer. Ambiguous villainhood is all well and good, but Loki is endlessly entertaining because he's so goddamn hard to predict. You really do get the feeling that he's living from moment to moment, rather than following a carefully itemised Evil Overlord plan like most supervillains. I just wanna high-five Tom Hiddleston and the writers all the way through, both for creating such a fun character, and for developing such an interesting interpretation of Norse mythology. 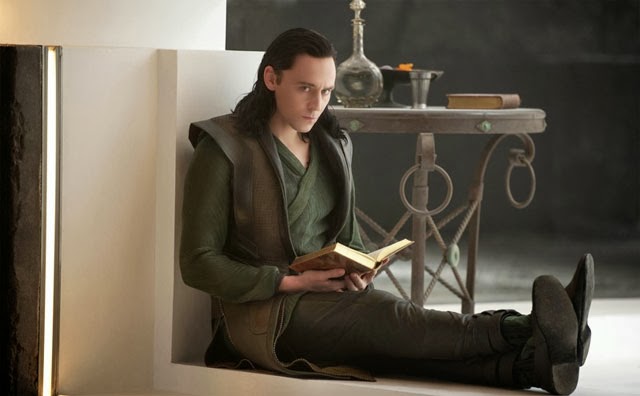 By the end of the movie, it's equally easy to believe that as king, Loki could lead Asgard to ruin or restore it to its greatest triumphs. If they go the mythological route then the only way this can end is with Loki's destruction. But from a personal perspective, I think most of us want to see him if not actually redeemed, then at least appearing in Marvel movies ad infinitum.

Continued in Part 2:  Female characters and representation.
Posted by Hello, Tailor at 06:37