Movie Costumes I Have Loved: Hanna.

Regular readers will be unsurprised to learn that last month's Oscar nominations did not exactly wow me in the Costume Design category. All five nominated films are period dramas (if you're interested in more detail as to why this irritates me, try my Introduction to Costume Design post), and in my view only one of them deserves a win: Hugo, whose costume designer Sandy Powell has already been nominated ten times and won three. Her acceptance speech for The Young Victoria last year mostly amounted to, "This one's dedicated to all the costume designers who work on films that aren't about dead monarchs -- you know, the ones you guys routinely ignore." COME ON.

As for what I'd nominate, the easiest answer is Tinker Tailor Soldier Spy. Although perhaps not an obvious contender for its costumes, my other favourite movie of 2011 was Hanna. It stars Saoirse Ronan as a girl raised in complete isolation by her father, a former spy. When Hanna reaches her mid-teens she decide that she's ready leave the forest where they've lived for her entire life, but in order to live freely they must first escape the clutches of Marissa Wiegler (Cate Blanchett), the CIA agent who has been hunting Hanna's father for years.

Not a hugely original story, but it's handled incredibly well by Joe Wright, the director of Atonement and Pride & Prejudice. He's not known for action thrillers, but rather than attempting a hit-and-miss approach to the genre (as Rob Marshall did with Pirates of the Caribbean 4) he sidesteps almost all common action-movie tropes. Instead of going the "sexy yet ass-kicking waif" route one might expect, Hanna comes across as a sweet and funny person, and displays none of the stoic angst that action filmmakers tend to use in place of characterisation.

The film opens with Hanna as the ultimate feral sweater girl. She and her father wear fur from animals they've hunted themselves, and the only other clothes on offer appear to be decades-old jumpers from before they went on the run. The implication is that they haven't left the forest since Hanna was a baby.

I tend to fixate on the need for costumes to be a conscious characterisation decision, and Hanna's clothes fulfill this specification brilliantly in that they exhibit no sense of taste whatsoever. Not in the sense that she has "bad taste", but rather that everything she wears is down to circumstance rather than choice or personal style. She's been raised away from any societal influence, with no sense of vanity whatsoever, and considering what we've seen of her life with her father it'd be ridiculous for her to be able to fit in with humanity's myriad of unspoken aesthetic rules after only a few days' experience with the outside world. The first place she sees after leaving the forest is a CIA detention centre, a grey concrete prison buried hundreds of feet beneath the Moroccan desert -- a far cry from the bleak snow and wild animals of her home. Her animal furs are taken away from her and she's dressed in a sanitised orange jumpsuit, purposefully designed to be reminiscent of Guantanamo Bay. 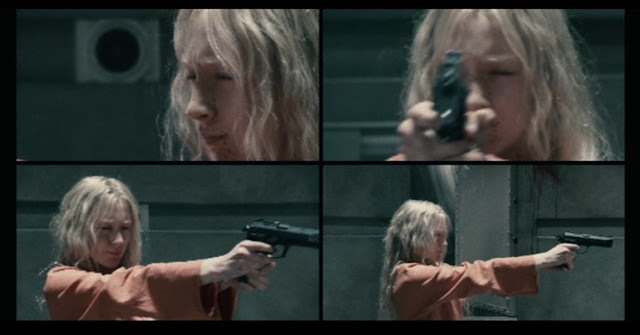 This film pays a lot of attention to colour palette, but not in such a way that it seems forced. The transition from the prison to the desert aboveground is made far more obvious, though, by Hanna's orange detention uniform. Against the concrete walls of the detention centre she's like a beacon, but aboveground she blends into the orange rocks and dust of the desert. 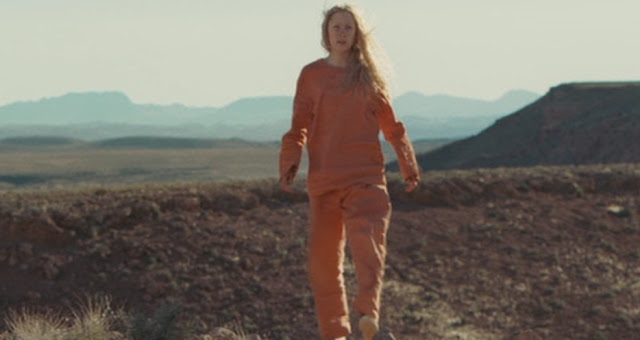 Some of the best moments of the film are when we see the world through Hanna's eyes. Once she's broken free of the detention centre, her first sight of everyday human life is this group of women, singing as they wash clothes by the river. Hanna has never even heard music before, only heard it described by her father from their much-reread encyclopaedia, and you know that this scene already contains more colour than she's ever seen before in her life.

The one constant among Hanna's various costumes is shapelessness. My favourite is the smock she steals from the river-laundry, because it makes it so immediately obvious how alien she is, both in Morocco and in the wider sense of human society in general. A white girl, by herself, wearing mens' clothing and probably not even realising how odd she looks because she's only ever spoken to about five people in her entire life, and she met all but one of them in the last couple of days. 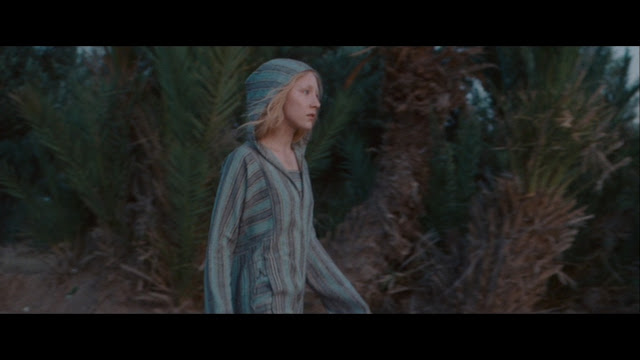 This is far from a humourless action movie. On her journey to reunite with her father, Hanna befriends a British family, a collection of semi-stereotypes who any British viewers will immediately recognise as an affectionate mockery of a certain type of well-off, Guardian-reading neo-hippie family.

The daughter is particularly entertaining: a stroppy, spoiled teenager rebelling against her mild-mannered parents. She gives the impression of being a Mean Girl, but not all Mean Girls are mean girls, and she and Hanna end up becoming friends -- possibly just because both of them are so bemused and intrigued by the other that they can't avoid it.

The mother and daughter's costumes cracked me up because they were so spot-on. The daughter is clearly taking great pains to be as girly and trendy as possible, nattering on about reality TV and boys and various other teenage pursuits that leave Hanna utterly confused. The mother, on the other hand, is a wonderful portrayal of well-meaning middle-class British liberalism, a university-educated feminist who used to backpack around the world and is now trying to relive the experience with her family. She commends Hanna for her apparent independence, but it's evident that she doesn't fully understand what that independence really entails.

Hanna's final costuming transition is when she reaches Berlin, by which point she's gained more experience in blending in. A hoodie and jeans: the ultimate urban camouflage outfit. But even though it's appropriate to her environment, you know she's not dressed like that in order to assimilate or look more like a normal teenager. It's just another disguise, as practical as the furs she was wearing when she first came onscreen. 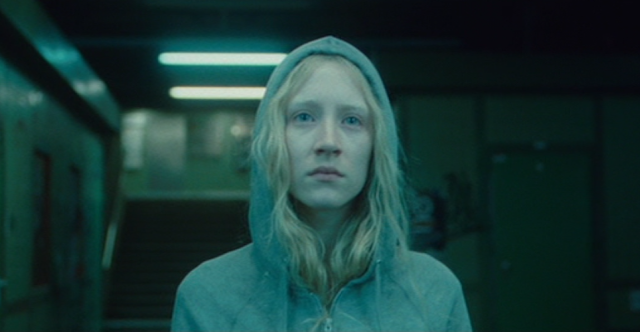 Marissa Weigler is the perfect counterpoint to Hanna's wild, curious innocence. She's introduced to the viewer by the sharp click of heels against the hard floor of government buildings, and the arresting image of her cleaning her teeth until she bleeds. She's a perfectionist in a world of minimalist grey conference rooms and sterile hotels.

Marissa wears almost the same thing in every scene. Her suits were designed by Giorgio Armani, and she wears several variations on the same one -- a smooth grey skirt and jacket, with a soft blouse that ties around the neck. For a woman working in such a regimented environment, I thought this was an ideal choice. Marissa is highly efficient, and seems like the type of person who would just buy five copies of the same outfit once she'd found something that struck the correct balance between formal and feminine. 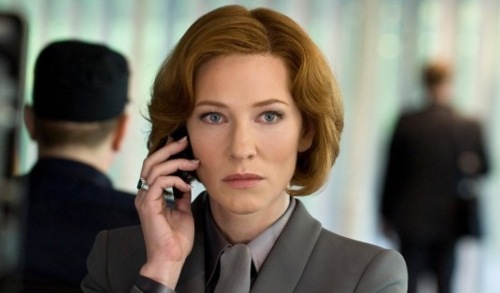 It's as close as a woman can get to the classic government agent "grey suit and nondescript tie" uniform code we're used to from every spy/law enforcement movie in existence. Officewear is hard.

Lucie Bates, the film's costume designer, said that Marissa Weigler was explicitly intended to be a fairytale villain. She stalks Hanna across Europe, merciless and manipulatively charming as she orders her minions to hunt down Hanna and her father. As Hanna continues to frustrate her kidnap attempts, Marissa gradually changes from the calm, all-grey palette of the CIA headquarters to vivid, poisonous greens. 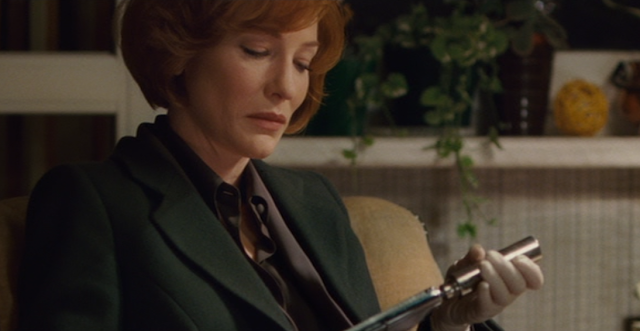 More often than not, Marissa is seen wearing gloves, the universal signifier of onscreen killers from Darth Vader to every James Bond assassin ever. Black leather gloves when she's outdoors; surgical gloves so she doesn't get her hands dirty when she has to kill someone; green gloves for the final scenes, once she's reached the point where she's dressing entirely in green.

An unusual amount of focus goes to Marissa's shoes. High heels, especially pristine high-heels stored carefully in a display cabinet, are one of the most recogniseable visual shortcuts to "American career-woman" one sees in modern pop-culture, I think. Marissa is a person very concerned with appearances; one who is willing to go through a lot of pain to look the way she does. Twice, we see her bleeding from the mouth as she carefully cleans her teeth with what looks like surgical instruments. And one of her few moments of physical weakness is when she has to take her shoes off while she's hunting for Hanna at the Grimm's Fairytales house in Berlin. Her vanity is like that of Snow White's Wicked Queen, with Hanna as a far less passive version of Snow White.