(Previously on Movies Costumes I Have Loved: A fan's introduction to costume design.)

I've described Tinker, Tailor, Soldier, Spy to friends as "a movie about grey-faced men in suits looking at each other suspiciously", although a slightly more accurate description would be that it's a British espionage thriller set during the Cold War, starring Gary Oldman as a spy brought out of retirement to track down a double agent in the upper echelons of MI6. It's full of reticent Englishmen (Colin Firth, Benedict Cumberbatch, Tom Hardy) staring at each other expressionlessly as they try to figure out who is double-crossing whom, and it's brilliant.
No one in Tinker, Tailor is dressed ostentatiously, and it would've looked out of place if they had been. The setting is (mostly) London in the early 1970s, but it's not the '70s of David Bowie, it's the '70s of chilly civil service offices during the Cold War, where feminism hasn't really hit yet. There are women working at MI6, but they're mostly office aides working silently in the background.

George Smiley
Gary Oldman's character may be the focus of the story, but he's as sombrely dressed as he is quiet in personality. He's neat, he's efficient, he's dogged, and his clothing gives away about as much as his complete lack of outward emotional expression. According to an interview with the costume designer, Gary Oldman wears two (very similar) grey suits in the film, but I'm damned if I can tell the difference. Everything about him is engineered to fade into the background. He's one of the old guard of British spies, quiet men who lived through the War and who feel slightly out of place in the rapidly changing world of the 1970s.
The one time we see him make contact with the world outside the Cold War machinations of "the Circus" (British Intelligence's nickname for itself) is when he goes to meet with his former colleague at her new job, running a hostel for students:

Check out how 70s her shirt is! Is that an artificial fibre I see? Smiley, on the other hand, looks like he only just noticed that WWII rationing is over. I loved this scene for its juxtaposition of the buttoned-up Smiley and the young, hippie-ish kids fooling around nearby in the hostel.

Guillam
Guillam, played by Benedict Cumberbatch, is Smiley's second in command and the youngest of those working at MI6. He's a bit more modern, and unused to the ruthlessness of the older agents who already lived through one World War. 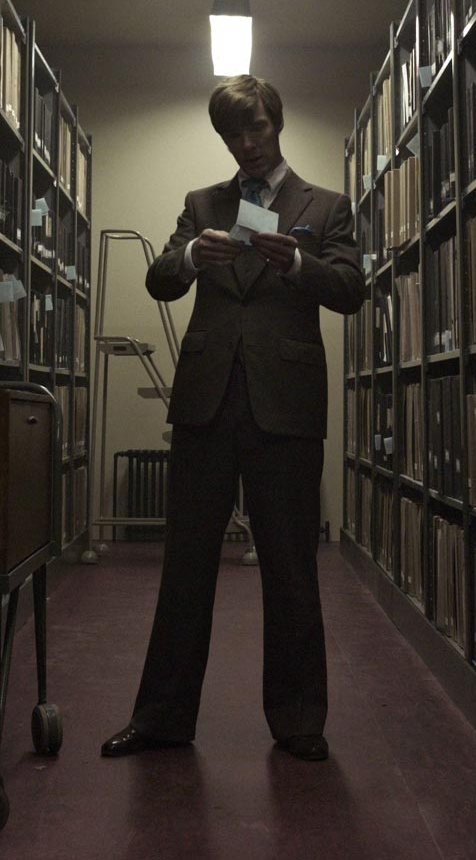 His trousers have a bit of a flair. His hair is trendier than that of the other agents. Compared to the older men, who have been wearing either rigid woollen school uniform, rigid woollen military uniform or three-piece suits since birth and have never once considered the possibility of self-expression, he's practically a dandy. And he accessorises:

'I wanted his character to look as if he were interested in clothes and had recently bought a fashionable suit,' said the costume designer in this interview.

Bill Haydon
Colin Firth's character is the other snappy dresser of the film, and the only character who displays any sense of humour or lightheartedness. He struck me as a classic product of the early 20th century British aristocracy, a real Oxbridge/Etonian man who has led a priveleged existence and sometimes doesn't take everything as seriously as some of his peers. He also dresses very... English country gentleman. 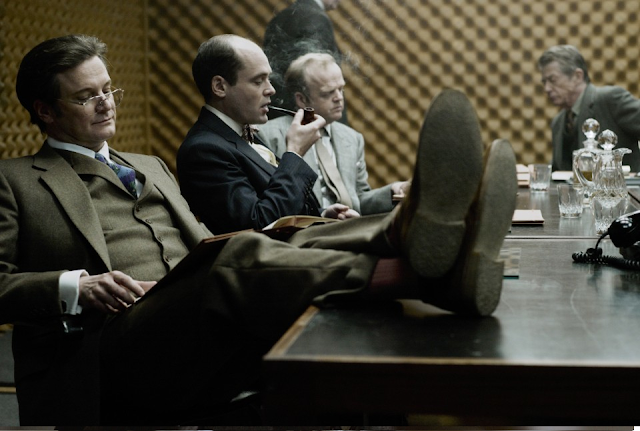 Lots of green/brown fabrics, tailored, of course a waistcoat, and showy cufflinks. You can't see them very well in these pictures, but he's wearing some kind of desert boots instead of dress shoes (outdoorsy!) and usually has brightly-coloured socks on. A bit of a posh eccentric, by the standards of the British civil service. 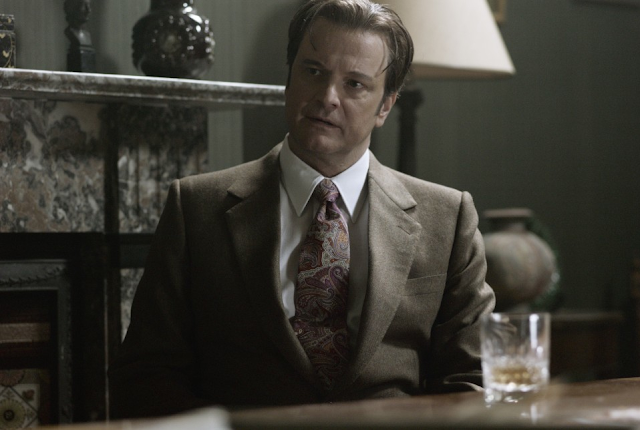 And here he is compared to the more modern, urban Guillam:

Control
John Hurt's "Control" (the original "M") is the oldest of the old guard. His clothes look like he could have been wearing them during WWII -- he's probably had the suit he's wearing in this picture for ten, fifteen, maybe twenty years.

The field agents
Ricki Tarr (Tom Hardy) and Jim Prideaux (Mark Strong) have very different roles to play, but as the only two field agents in the film they have more in common with each other than with the other characters -- despite Prideaux's close relationship with Haydon. Ricki Tarr is of the same generation as Guillam, but is from a very different background. Every one of the men of the Circus is almost certainly a former private school boy and/or Oxbridge graduate, but Ricki gives the impression of being more working class. He's the one who does Guillam's dirty work for him, going to Russia on the trail of MI6's double agent. He's the most casually-dressed person in the film (although I think we can assume that he's often dressing to fit in with people on the street wherever it is he's currently working) and the only one who never sets foot in the Circus offices.
Ricki Tarr is the most physical character, and you can see it in his clothes: unrestricting and comfortable. Like Guillam he's a modern man, far more emotionally expressive than the older generation of characters -- and along with Guillam, he's one of the only characters to participate in anything close to a functional adult relationship.

Mark Strong's Prideaux, however, is just straight-up practical, whether it's when he's undercover in Russia or just during day-to-day life. He seems to have very little personal vanity. I can't remember if it's ever explicitly stated, but I get the impression that despite his long-time closeness with Haydon (Colin Firth), Prideaux is far less upper-crust than he is. I loved the subtlety of the costuming in Tinker, Tailor. Suits that looked worn-in without seeming worn-out, harkening back to an age when most adults had experienced rationing firsthand and neatness had been drilled into young men as a habit throughout school and the military. Conservative and British, but not without personality. An excellent example of tailoring costumes to characters.

Email ThisBlogThis!Share to TwitterShare to FacebookShare to Pinterest
Labels: costumes, movie costumes i have loved, movies