Costuming and design in Hannibal: Bella Crawford, between life and death.

I already mentioned in my first Hannibal costuming post that the FBI team dress like characters in a crime procedural drama, while people like Hannibal and Bedelia du Maurier seem to come from another universe entirely. The main visual difference between the FBI lab team and your average CSI character is that they wear vanishingly few monochrome outfits. 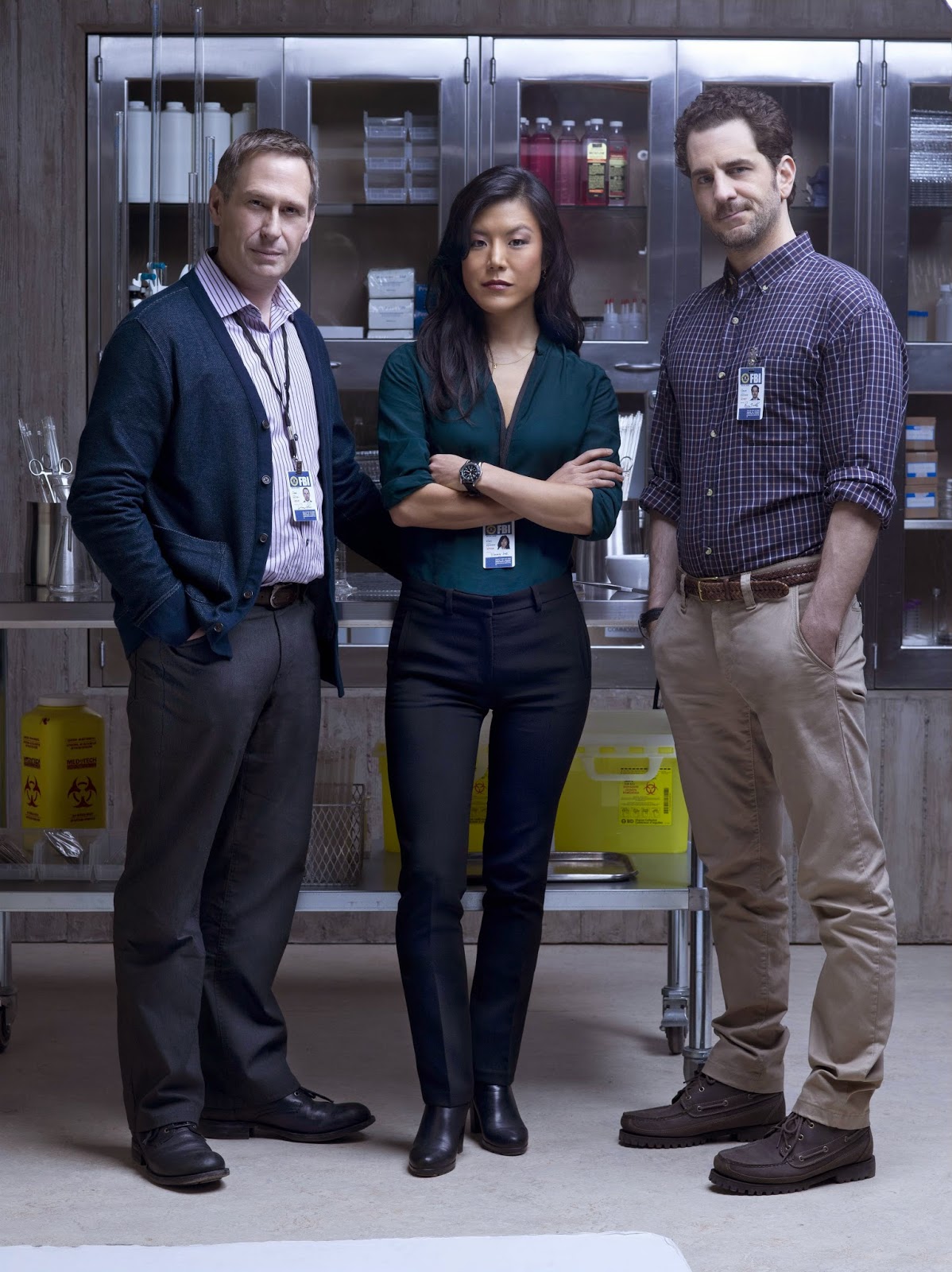 Compared to a show like Person of Interest, where two or three main characters can be wearing all-black outfits in any one episode, Hannibal's crime-fighters look positively colourful. Beverley Katz has at least three different maroon jackets, Jack Crawford loves his dark blue and purple jewel tones, and even Price and Zeller mostly wear neutral colours like navy blue or beige. (Price is characterized by his slouchy dad outfits and cardigans, while Zeller's clothes are more youthful and flattering.) 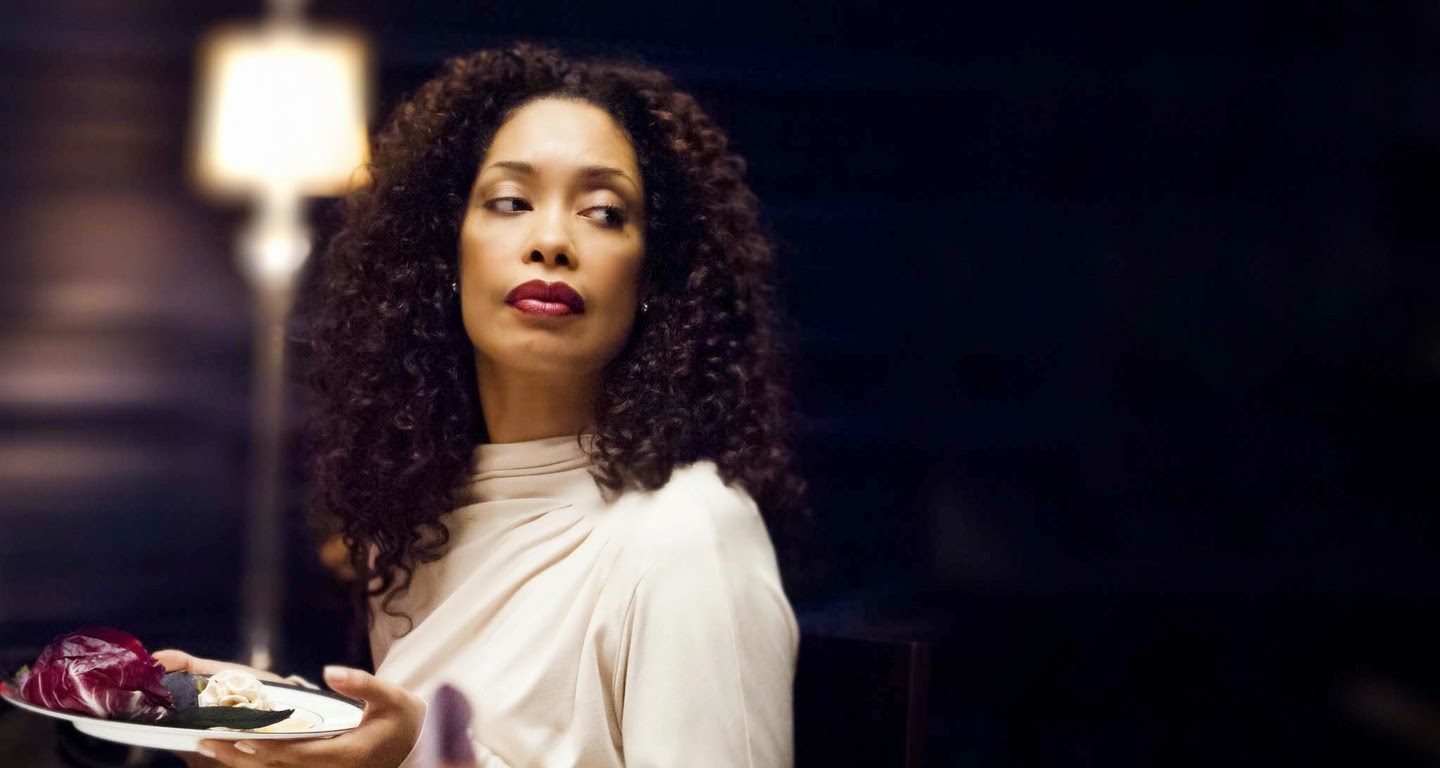 The only character in the show who habitually wears black and white is Bella Crawford. In her first appearance in "Coquilles," she's wearing a pure white dress to a dinner party with Hannibal and her husband. In the darkness of Hannibal's dining room, she stands out immediately, and the draped style of the dress makes Gina Torres look like some kind of ancient Greek deity.

Another potential meaning of these white outfits is that she is already a "ghost," in among the more colourful, healthy characters in the show. (By this metric, Hannibal's vibrant colour palette is the "healthiest" of all, which makes sense. Mads Mikkelsen loves to talk about how rather than being a "dark" character, Hannibal is almost always the happiest person in the story.)
Bella's next outfit highlights the white dress from earlier, for reasons that don't become apparent until we see her from another angle: white at the front, but black at the back. Black and white are both associated with death, although in this context I think the stark contrast uses white to represent the healthy "front" she shows to the world, with black representing the darkness of lung cancer that hides behind her facade. Either that, or it's the shadow that will soon catch up with her, and has already overtaken some parts of her body that we don't notice at first glance. 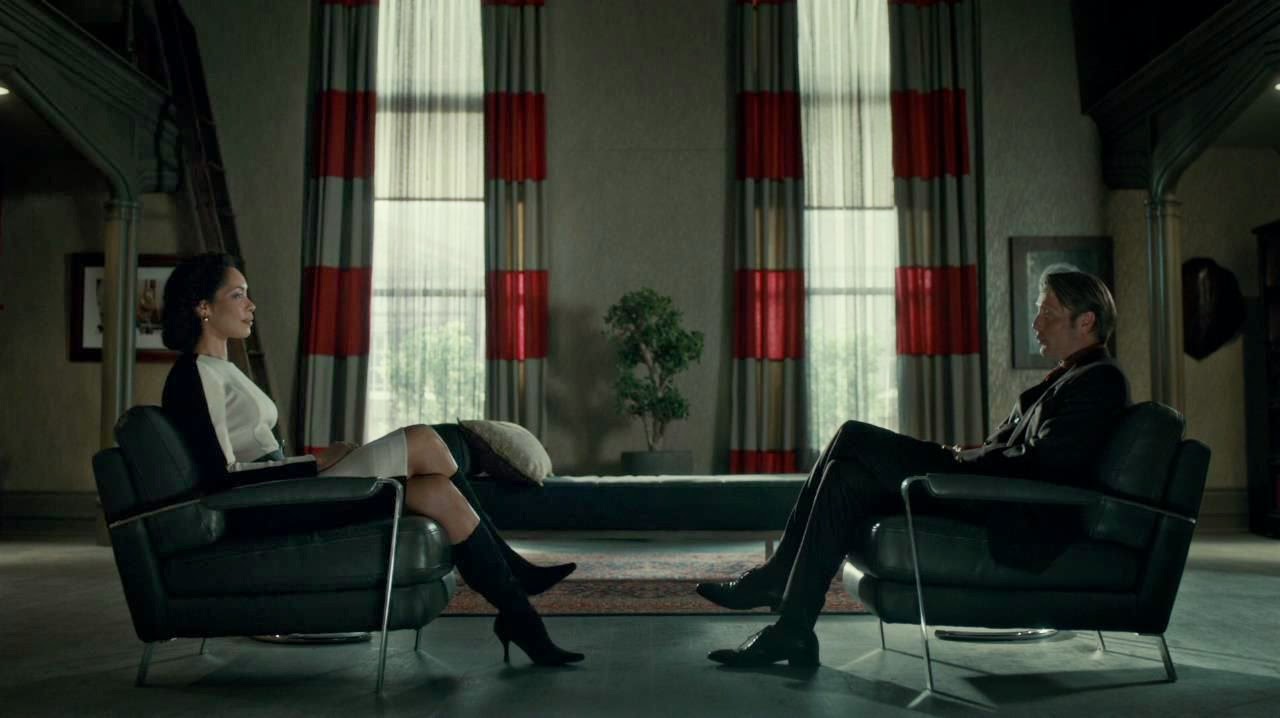 For obvious reasons, this show is riddled with imagery to do with death and the afterlife. However, while most of the time it's something related to the viscerality of material death (i.e. the skulls and horns decorating Hannibal's dinner table, or the crime scenes we see in every episode), Bella is the one character whose appearance uses symbolism associated with the more spiritual side of death: light and shadow, black and white. As someone who is mostly unconnected to the day-to-day events of the FBI and the world of serial killers, she is "pure," and is also the only character who is poised for a natural death.

At home with her husband in "Coquilles," she's back to wearing paler shades: a leopard-print robe and nightdress which the eagle-eyed costumesofhannibal blog pointed out could potentially resemble a pattern of "free-floating cancer cells." Her final appearance in this episode is the scene when she comes clean to Jack about her lung cancer, at which point she has transitioned over to a severe black outfit: mourning clothes. 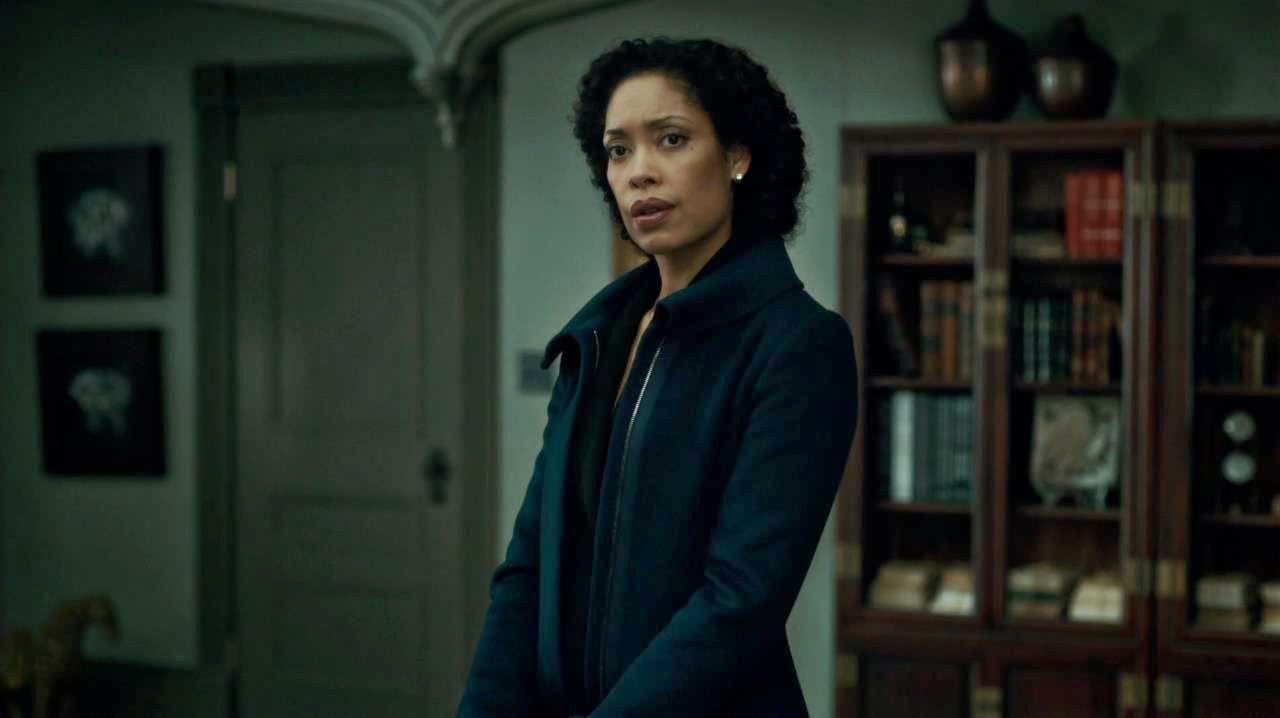 The next time we see her is in "Takiawase," by which point she's in chemotherapy and is far less put-together than before. We already knew that Bella is very much attached to her dignity, and all of her outfits in "Coquilles" showed her to be mature and poised. Her appearance in "Takiawese" is an obvious progression from that. Although she retains the same sense of style, she's wearing a soft cardigan that would look more appropriate on an older, frumpier woman. She's also wearing pale grey: fading from life to death, or from light to darkness. She is still the only character to wear truly monochrome outfits. Even Hannibal's "grey" suits are always shot through with threads of other colours, or accessorized with a patterned tie or pocket square. 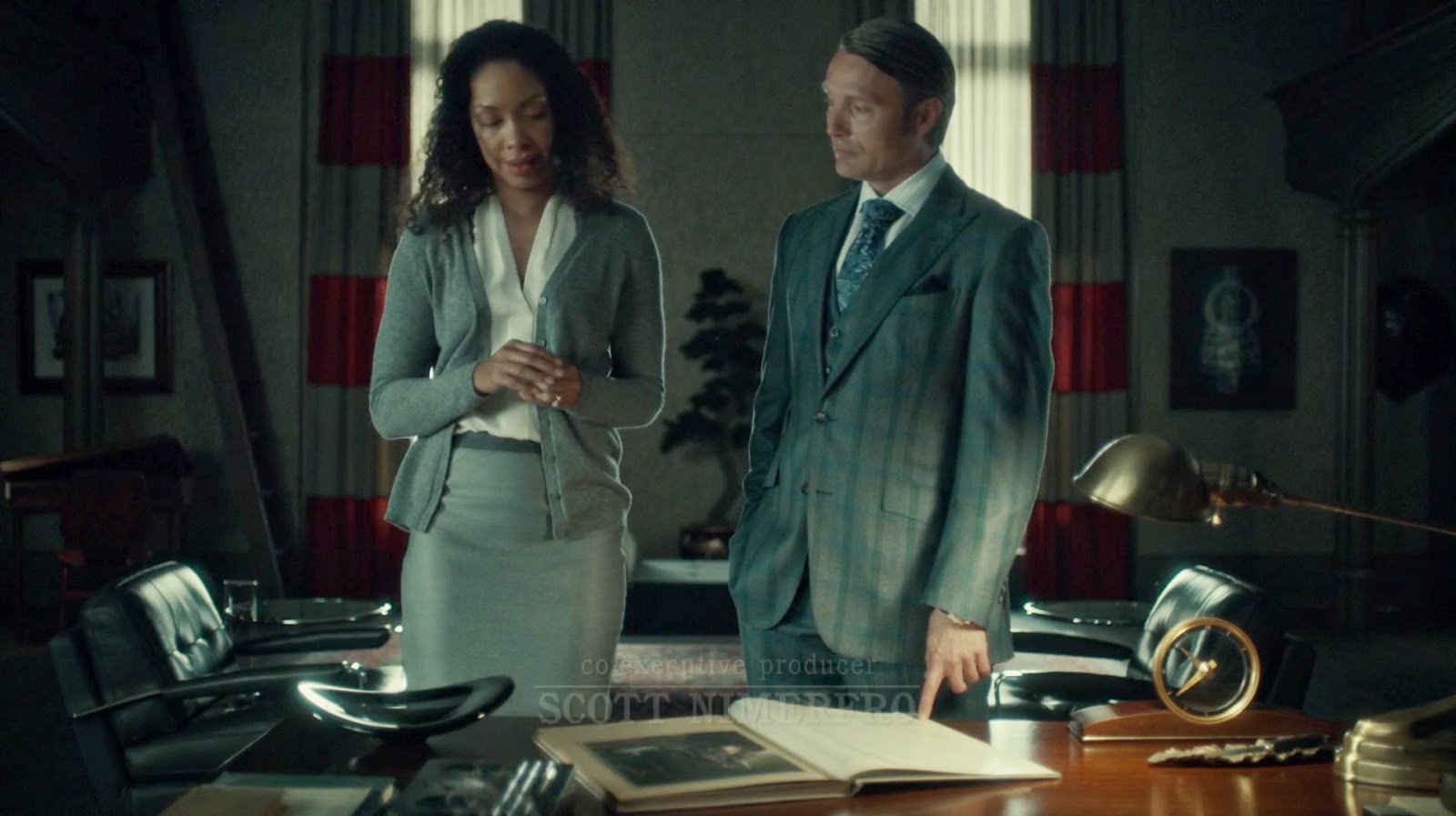 Another detail to note in this scene is the lighting. In their first session in Hannibal's office, the curtains let in far more daylight, and everything was much clearer. This time round, Hannibal's inner blinds seem to be at half-mast, giving everything a slightly murkier feel. Lighting is always used to great effect in this show, particularly in scenes that take place in Hannibal's office or Bedelia du Maurier's house, both of which have huge windows and multiple artificial light sources that can cast the characters in and out of shadow. 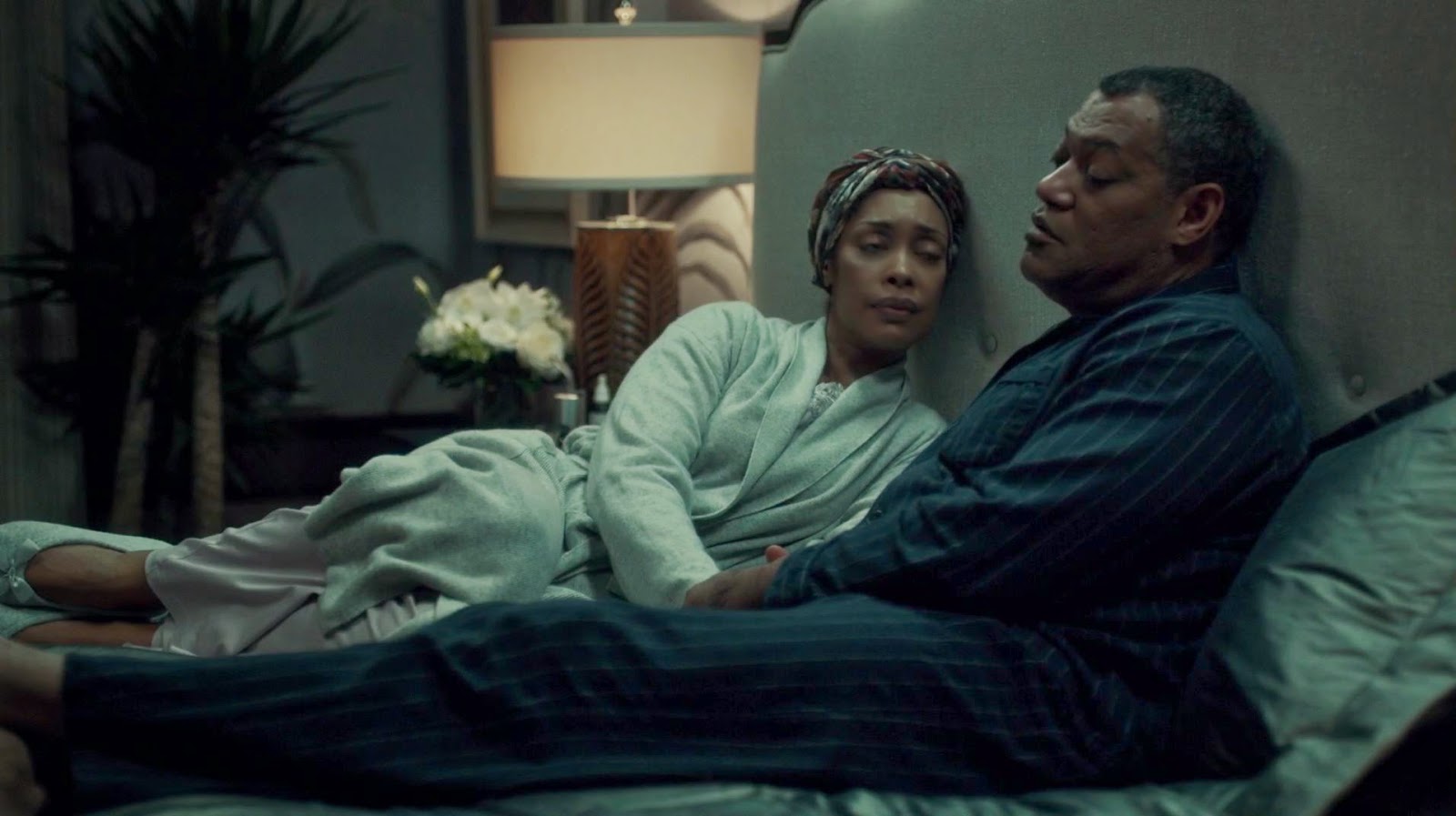 This progression into "old lady" outfits continues with Bella's scene at home with her husband, where she wears a terrycloth robe and what looks suspiciously similar to hospital slippers. A floral scarf holds back her thinning hair, there are white roses by the bed ("purity," once again), and for the first time we notice the somewhat funereal decor of the Crawford household. Here are some set photos from showrunner Bryan Fuller's Twitter feed: 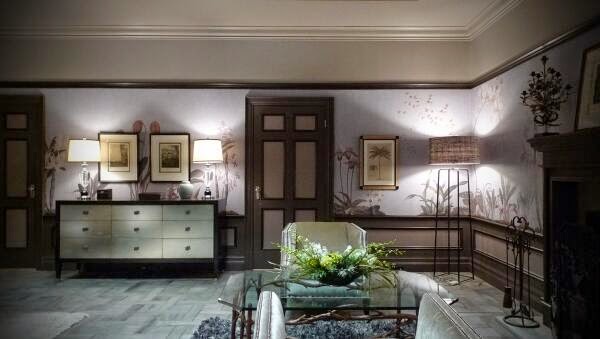 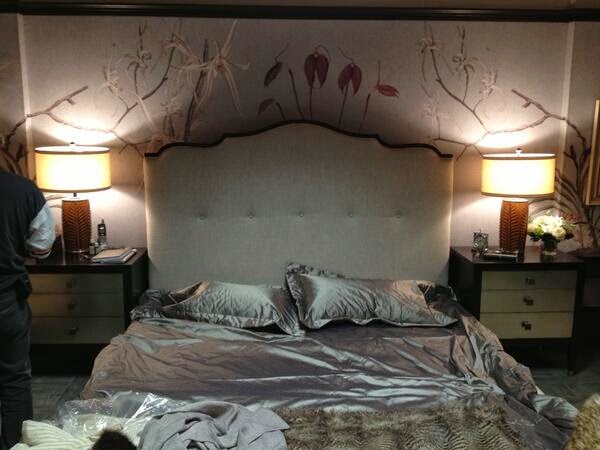 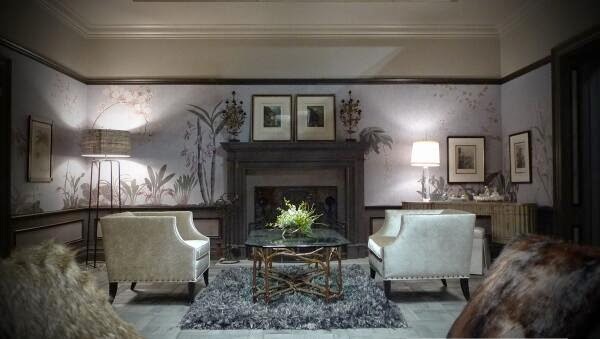 For her suicide scene in Hannibal's office, Bella wears a softer version of her cardigan outfit from earlier on, this time with a pale beige cardigan and a shroud-like blouse. The office is in complete daylight once again, rather than the half-dark of the earlier scene. 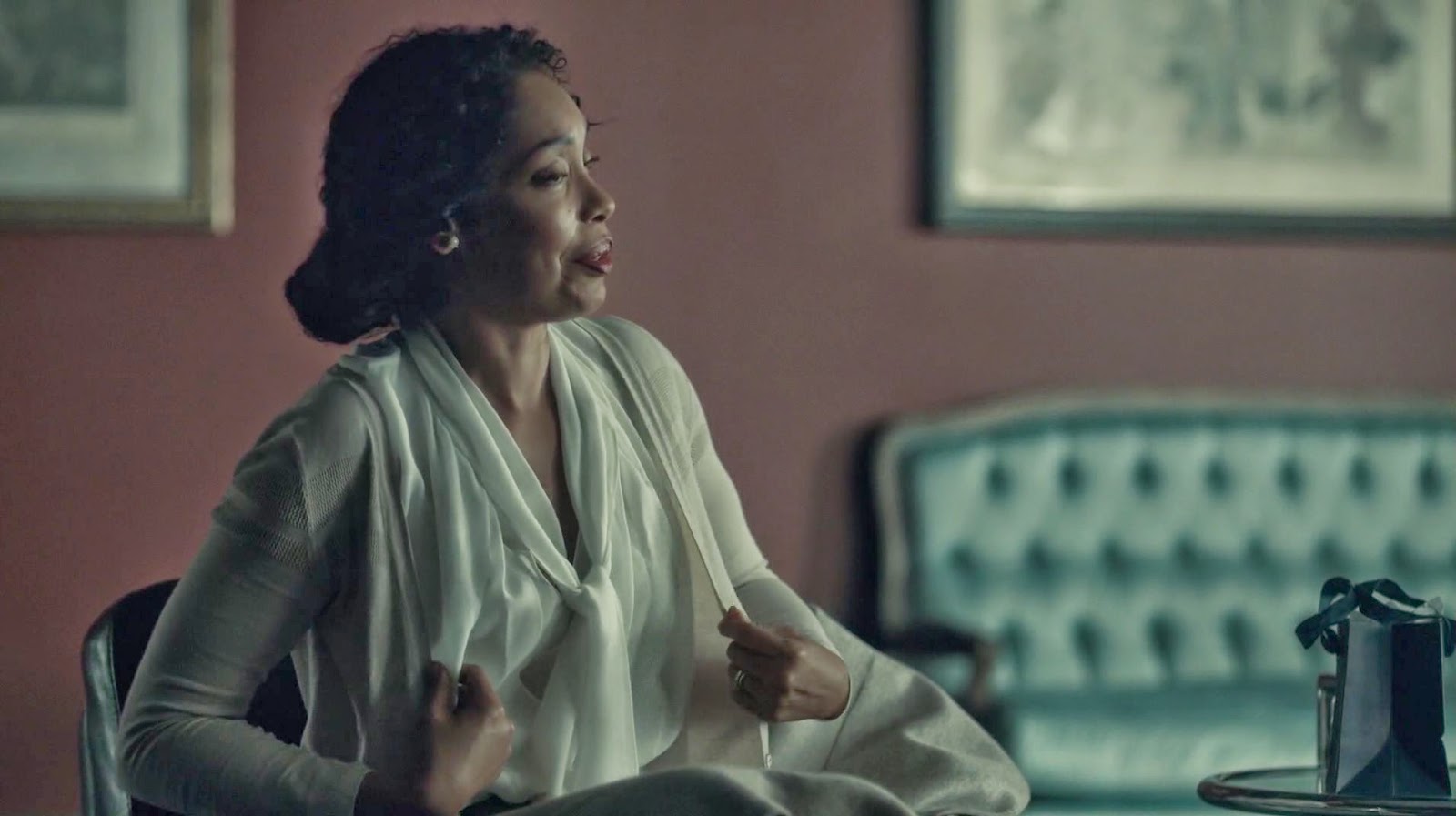 In Bella's hospital room scene, the set design is far more important than costuming. Bella is shot like the serene corpse of a medieval saint or queen, lying in state or depicted as a marble statue on top of her final resting place. Meanwhile, Hannibal lurks in the shadows at the foot of her bed. Although Jack said in an earlier episode that Bella was trying to avoid their house looking like a hospital room with too many flowers, the colour scheme and potted plants in Bella's real hospital room bear a startling resemblance to the Crawfords' home decor. Dressed in hospital scrubs, Bella edges ever closer to the loss of dignity she feared after her first diagnosis, while Hannibal is back in control once again. As Dr Chilton said last season, sometimes saving a life is as arousing as taking one. 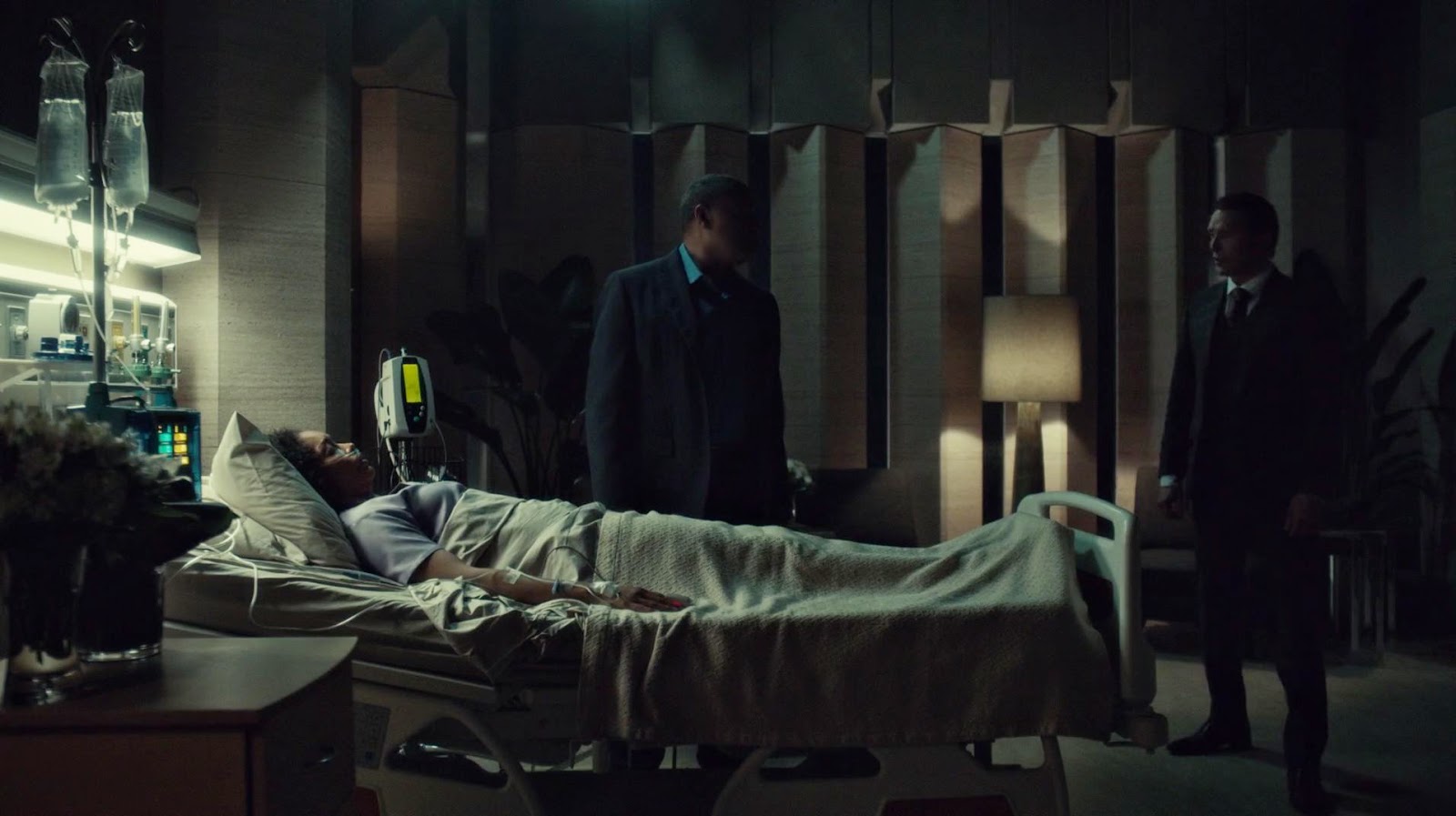