Sometimes I feel like superhero fandom is suffering from some kind of intricate mass delusion regarding X-Men: First Class. Specifically, that it's a good movie. Because it's not. It's just not. But I love it anyway! Half of it may be trash, but the other half is heartbreaking doomed romance and clumsy-yet-effective political allegory. And McAvoy and Fassbender are really excellent casting, which is just as well because it takes serious acting chops to make some of their dialogue sound plausible. NEVER FORGET that this is the movie that forced Kevin Bacon to utter the line, "Turn the nuclear reactor up to 100% and make sure I'm not disturbed." 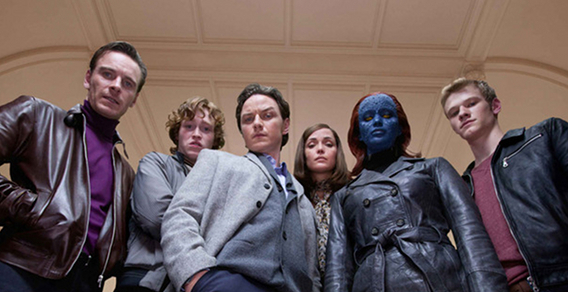 The best way to appreciate XMFC is to remove your brain with an icecream scoop and concentrate fully on the agonising Romeo & Juliet-style romance between Magneto and Professor X. It is beautiful. It is timeless. They could have cut out every other character (except maybe Raven and Oliver Platt) and I would still have queued up to watch the Doomed Mutant Terrorist Soulmates show on opening night. Also, if you're focusing on the Charles/Magneto stuff then you're less likely to notice this movie's main flaw: the fact that it's intensely terrible when it comes to The Gurlz. 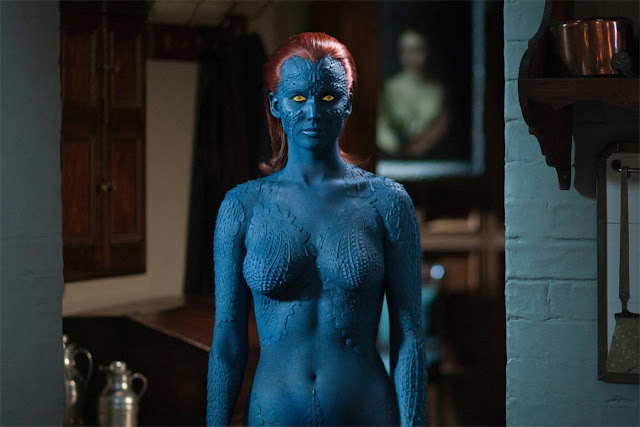 Raven is the main female lead, and is simultaneously the best and worst-written of the ladies -- mostly because Moira's primary job seems to be Emoting At Stuff (Rose Byrne was tragically underutilised in this role), and Emma Frost is the archetypal amoral vixen character. With Raven, many aspects of her character are perfectly understandable in a really, really depressing way. For example, when she starts wandering around naked it really kind of makes sense, at least from the perspective that Erik is a douchenozzle who takes advantage of her low self-esteem and desire to be recognised as a mutant and an adult woman. Yeah, right, becoming a nudist is definitely a way of showing "pride" in your mutant side, I'm so sure. The fact that she's blue does not make one iota of difference to the fact that some dude just told her the best way to be proud of her body was to walk around naked for the rest of her life. 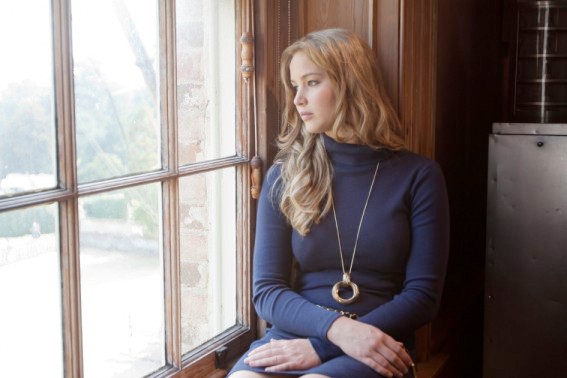 But while that does make sense (ERIK, YOU'RE A DOUCHE), Raven's relationship with Charles is kind of baffling. At most she's five years younger than him, but he treats her like a child -- presumably because physically, she ages slower than he does. It's understandable for her to be frustrated by his patronising attitude -- particularly since if he's in his late 20s, then she's at least 22 years old. However, their final scene was just bizarre. While it's easy to understand her being drawn to Erik (ie, someone who represents a more radical view of mutant freedom, and "respects her as an adult"), it's just plain inexplicable for her to leave her brother dying alone on the beach while she swans off to be Magneto's naked sidekick for the next 50 years. Emotionally, this did not ring true to me at all. Yes, she might have left him to join Magneto, but she wouldn't have left him bleeding to death with a broken spine.

I don't watch Mad Men, but the presence of January Jones leads to some inevitable side-by-side comparisons, particularly when it comes to the movie's aesthetic. I have to wonder if January ever wanted to criticise the 1960s-era costumes and set design in XMFC, because they're really not very... accurate. Not that this matters as much as in Mad Men, since a) it was probably a purposeful design choice, and b) XMFC technically takes place in an alternate universe, so even if the Cuban Missile Crisis etc did take place, it's reasonable to assume that fashions would be slightly different. However, there's another, rather more serious comparison you can make between X-Men and Mad Men: the way each one treats its female characters. 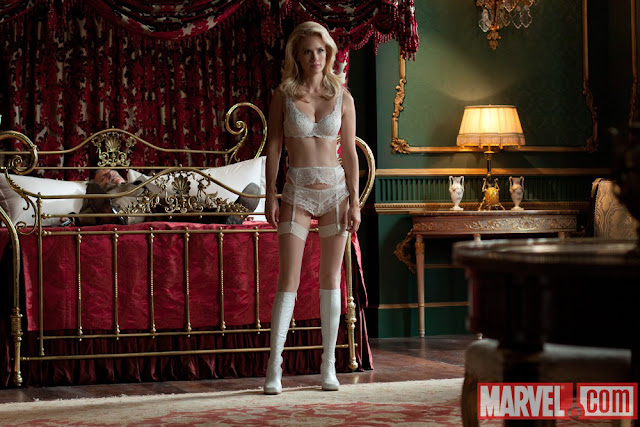 When making a movie set in 1960s America, it makes sense to include some period-specific sexism -- particularly when it's a movie that focuses on certain groups being oppressed by the patriarchy. X-Men is an ideal opportunity to slip in a couple of casual references to everyday sexism and racism, to highlight their similarities with anti-mutant xenophobia. Instead, you get things like Moira McTaggert infiltrating the Hellfire Club by taking off all her clothes to reveal a convenient set of perfect lingerie (including garter belt!) that allow her to pretend to be a hooker. While there are probably some people who are ready to go undercover at the Playboy Mansion at the drop of a hat (or skirt), that list begins and ends with Lady Gaga and people on their way to a hot date. Not a businesslike CIA agent on a stakeout with a male work colleague, who has now seen her in her underwear. 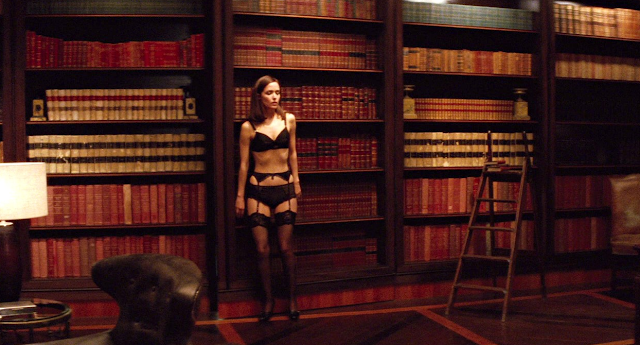 I can almost guarantee that someone will end up haranguing me in the comments section for being a prude, but seriously: if you're a female CIA agent in the 1960s, it's not a good idea to strip to your lingerie while sharing a car with a male work colleague. He's vanishingly unlikely to be impressed by your ingenuity, and will most likely report back to your bosses, some of whom may literally have been born in the 19th century. The perfect icing on the cake of Moira's "character arc" (LOL) was when Charles removed her memories without her consent, leaving her mumbling about a ~half-forgotten kiss~ in front of a room of old CIA dudes, who promptly turned to each other and were like, "THIS is why we shouldn't allow women out in the field." 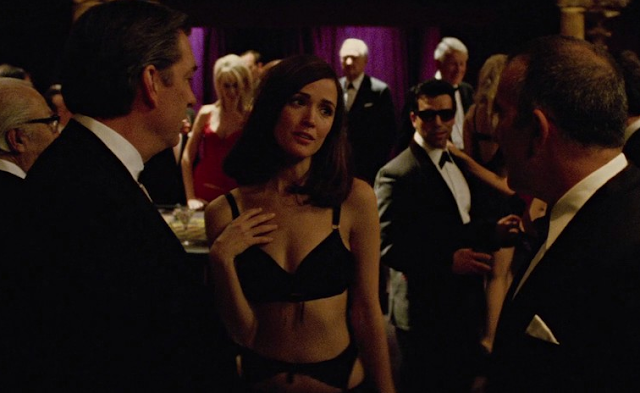 And then there's the Angel Salvatore situation. In the X-Men comics, Angel is not a stripper. So why is she a stripper in the movie? What reason is there? Pro-tip for any filmmakers out there: if one of your female characters is a stripper or sex worker for no apparent reason... maybe reconsider and make her a bartender or bus conductor or something. This kind of thing is the reason why there are only about three actresses in Hollywood who have made it to 30 without having to play a stripper or a prostitute. 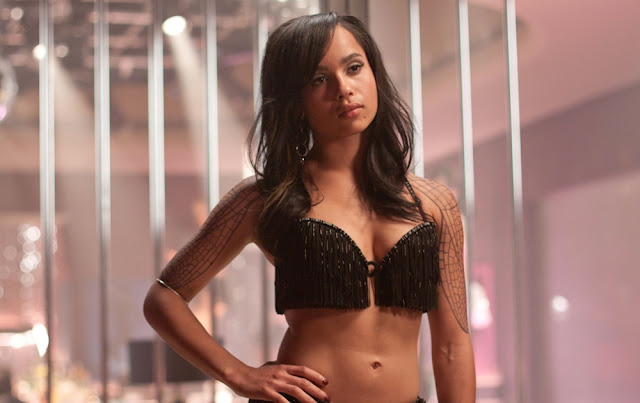 To me, the most surprising thing about Angel's transformation from sulky highschool dropout to sassy go-go dancer was the fact that, at the time of the movie's release, I don't remember people being particularly bothered by it. I'm certain plenty of fans were bothered by it, but nowhere near at the levels of the vocal douchebag contingent who thought it was sacrilege to cast a black .guy as Heimdall in Thor -- despite the fact that Idris Elba is as close as you're likely to get to a demigod in real life. Additionally, the combination of the underwear (or semi-underwear) costumes worn by Emma, Angel and Moira are the point where I start to lose faith in the original excuse of, "It's an alternate universe, so things don't need to be historically accurate!" 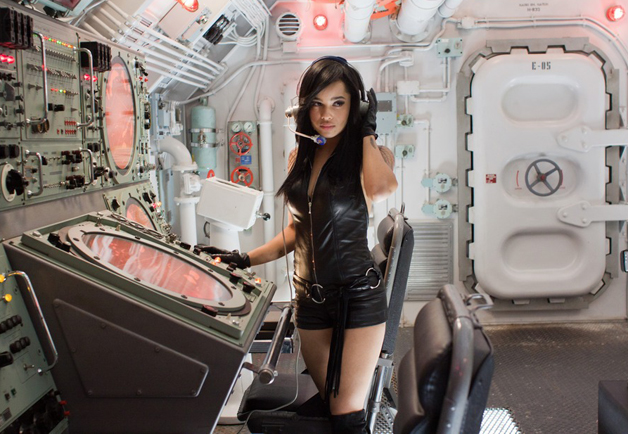 The way "1960s" costumes seem to work in this movie is that the menswear is relatively accurate, because for men, 1960s style is all about harking back to an era were Men Were Men. Back in those days, Don Draper and James Bond could order sixteen martinis and a new pocket square from room service, and not have anyone bat an eyelash. However, 1960s womenswear just doesn't have the same connotations, and most of the womenswear in XMFC was altered to make it look more appealing to modern standards of beauty. Most noticeably, the bra shapes. It's absolutely plausible to include a scene where a bunch of Playboy Bunny types are entertaining gross old dudes in a members-only club, but the girls would all be wearing bullet bras, would have ~trendy '60s hairstyles (WHERE WERE THE BEEHIVES??), and would probably be about 15 lbs heavier than the modern-day models they hired as extras in that scene. 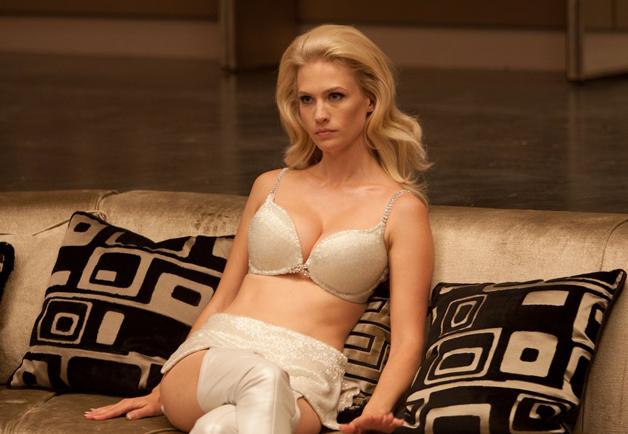 With the exception of Emma Frost, most of the womenswear in this movie was kinda meh to me. No disrespect to the costume designer, who has done amazing work on a bunch of movies like V for Vendetta, Hellboy 2, and Stardust. It's just that the way I see it, the filmmakers went out of their way to create a "best of both worlds" scenario: 1960s sexism allowing them to include a scene where a whole bunch of women strip down to their underwear for male entertainment, but 21st century standards of beauty so the (male) audience can appreciate it on the same level. Emma Frost was great, though. She's pretty much the only character you can get away with dressing in a white leather miniskirt and a white bra for everyday wear, because that's just how she rolls. Which begs the question: why bother with extraneous eyecandy scenes like Moira's CIA lingerie mission in the first place?

The menswear, on the other hand, is excellent. More on that in Part 2.
Posted by Hello, Tailor at 09:27