Haider Ackermann is my fave and Tilda Swinton's fave, which means two things: 1) that he's been judged to be Objectively Awesome by a panel of experts, and 2) that Tilda Swinton and I are destined to be BFFs. 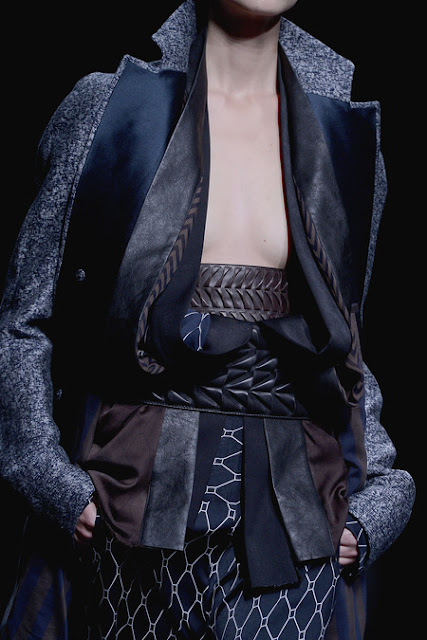 Ackermann tends to stick very closely to his tried-and-tested design themes, but I'm of the opinion that that's A-OK because no one else is doing what he's doing. I'd divide this particular collection into three sections: pajama-style outfits that closely resemble his other recent work, tailored suits, and translucent, floaty gowns that represent an interesting step away from his usual fare. 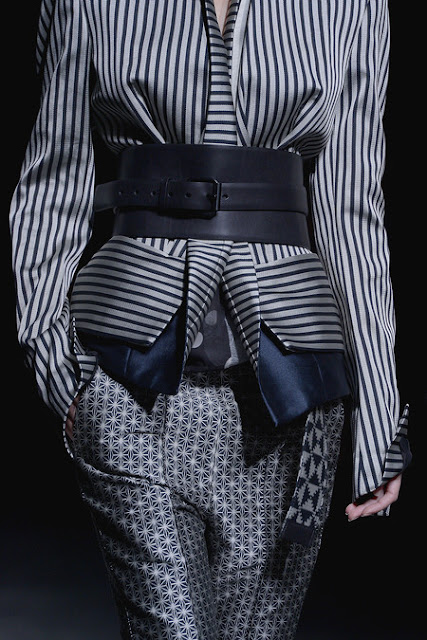 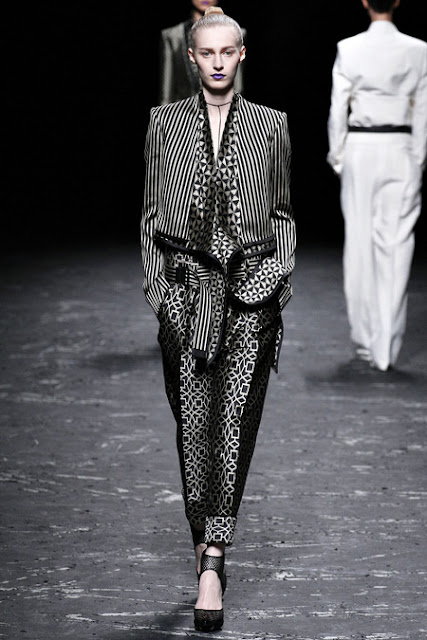 The big difference between this show and Ackermann's previous work is the lack of colour. Up until now he's worked mostly in jewel tones, using deep, iridescent purples and greens to create a signature look inspired by Victorian men's pajamas. This time round everything is strictly monochrome, but since Ackermann is a genius when it comes to fabric choice, the clothes have retained that subtle glow. Also, the absence of colour gives him more leeway to experiment with patterned fabrics. 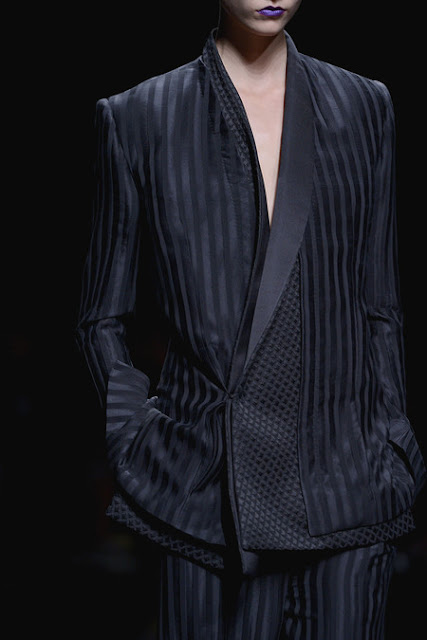 The androgynous, relaxed silhouette of the cinch-waisted pajama outfits is familiar from previous seasons, as are the wide belts and general lack of buttons. The suits, however, are tighter and more tailored than they were before. Although I very much enjoyed the fabric used in every one of these outfits, the suits were the weak point of this show because they weren't all that different from what several other major labels are turning out at the moment. That's a pretty minor quibble, however, considering the fact that the did still look great. 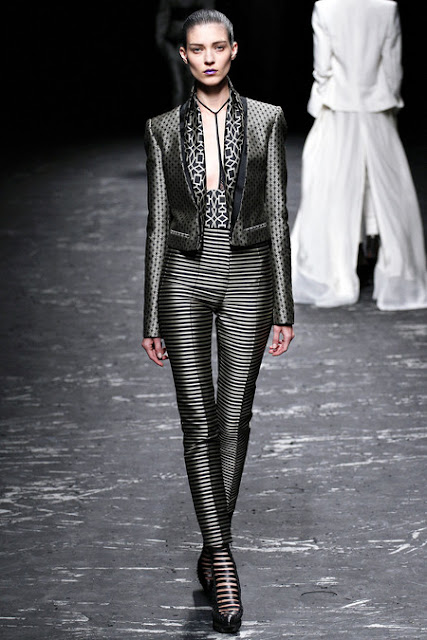 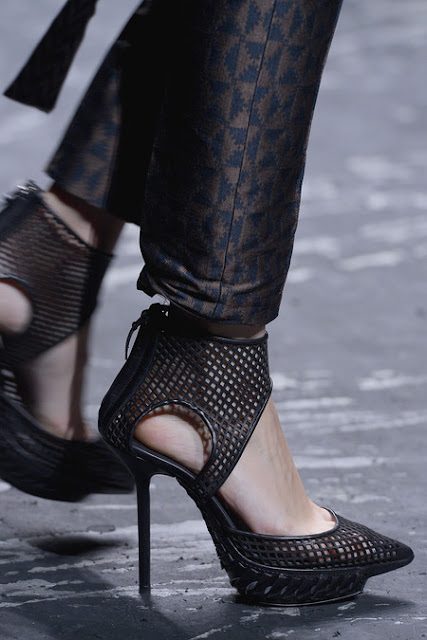 Ackermann isn't really a designer I associate with delicacy, but this season introduced a certain lightness of touch that I haven't seen from him before. His designs always focus a lot on draping, with whole outfits looking like they're made from scarves, so it's no surprise that his dresses are almost entirely un-fitted. Despite the quantity of skin on show, the aesthetic was still far from girly, with thick pleated leather belts providing a protective layer over the bust. 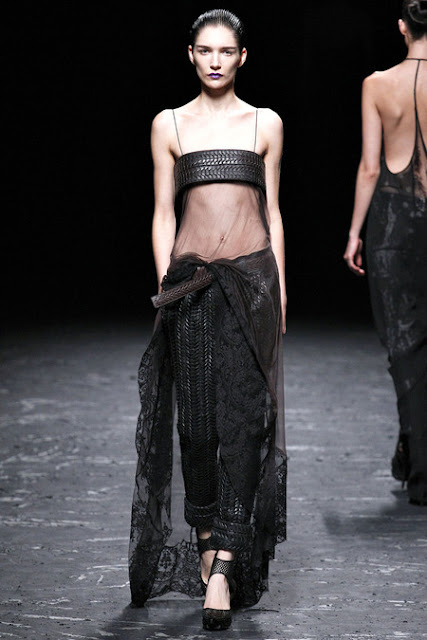 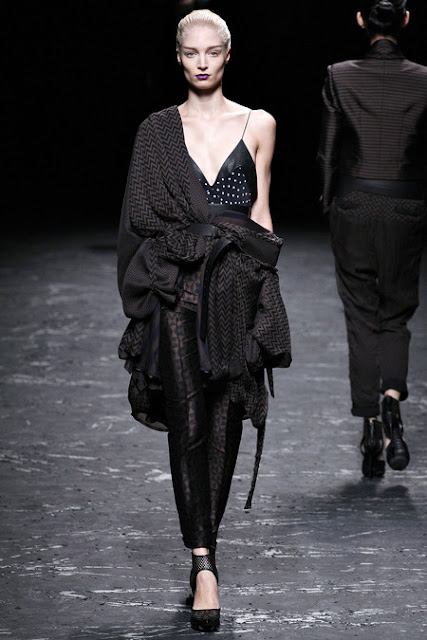 I really enjoy the fact that all of the dresses seem to have trousers underneath. Haider Ackermann is a ridiculously luxurious brand -- one of the few who regularly turns out entire ready-to-wear collections that are genuinely different from the kind of clothes you can buy from highstreet shops -- but there's always something very "street-style" about his clothes. Maybe it's because aside from the suits, his clothes always seem very customisable, fitted out with multiple layers of scarves and belts to be tied up or left hanging loose as the wearer wishes. 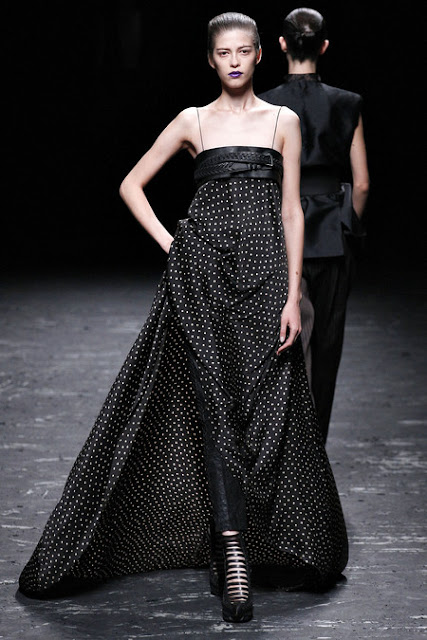 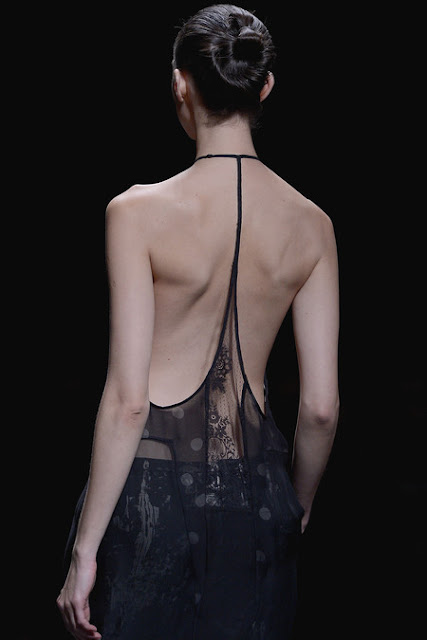