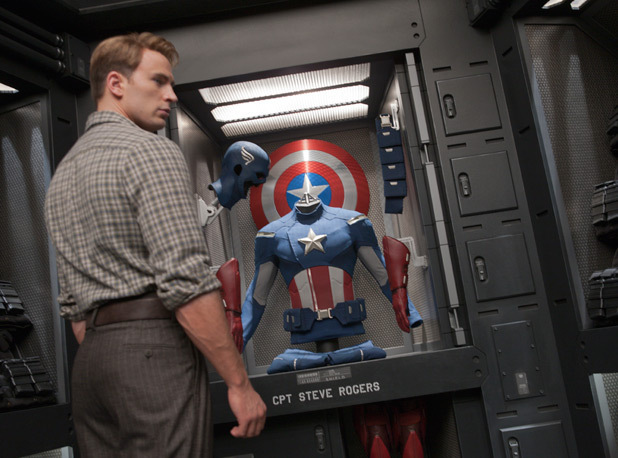 The Thor movie is relevent to The Avengers not as a source of backstory info for Thor, but more as Loki's own origin story. Already an unusually complex and emotionally engaging villain, Loki only becomes more interesting when you know more about his upbringing. As for Captain America, while I don't think that knowledge of Steve's backstory is necessary to understand The Avengers, an appreciation of his character definitely helps. Seeing Steve Rogers before his supersoldier transformation helps us understand the reason why he "is" Captain America rather than just a star-spangled man, and the fact that he's fresh from the '40s has the twofold influence of making him the ultimate fish-out-of-water character (perhaps even moreso than Thor, who has no real need to fit in with human society) and adding a horrendously depressing aspect to every one of his scenes because everyone he ever knew or loved is dead. The fact that Steve Rogers is even remotely functional in day-to-day life is tantamount to a miracle.
Steve Rogers has the same goofily earnest attitude as Clark Kent/Superman, something that's rather hard to pull off in a movie aimed at the cynical bastards of 2012. It makes me worry that people who haven't seen the Captain America prequel might misunderstand the charm of the Steve Rogers we see in Avengers. I saw several reviews that commented that Cap seemed clunky or cheesy compared to the rest of the Avengers, and each time I got this ridiculous protective urge to be like, No! Watch his own movie! It's heartbreaking and inspiring and there's a musical number where he punches Hitler in front of a chorus line of girls in spangly stars-and-stripes minidresses! Man, I'm Scottish and a pacifist and barely have any patriotic spirit for my own country (unless you include gallows humour about rain and alcoholism), but if you don't like Captain America then I don't even know what to do with you. He's even better now than he was fifty years go because as a person he's really the exact opposite of the kind of jingoistic sentiment the 1940s propoganda "Captain America" was originally intended to be. Seriously, all I want for his sequel (aside from a scene where someone explains to Steve that Ronald Reagan became President of the United States) is for him to be a feminist, gay-friendly human rights advocate. Look, I can dream, OK!!
I feel like Avengers managed to make a little go a very long way with Steve Rogers, character-wise. While the lack of explicit backstory for characters like Hawkeye, Black Widow and Bruce Banner was most likely a timing issue, the lack of Cap-based exposition was necessary in order to avoid muddying the waters for the writers of the Captain America sequel. Steve Rogers' characterisation had to rely on in-the-moment reactions and visual details like costuming or Chris Evans' remarkable ability to have the facial expressions of a Disney prince. Joss Whedon did do some work on the script of Captain America: The First Avenger, and I have to wonder how much of that was stuff about his sense of humour/speech habits that carried over to The Avengers the next year. 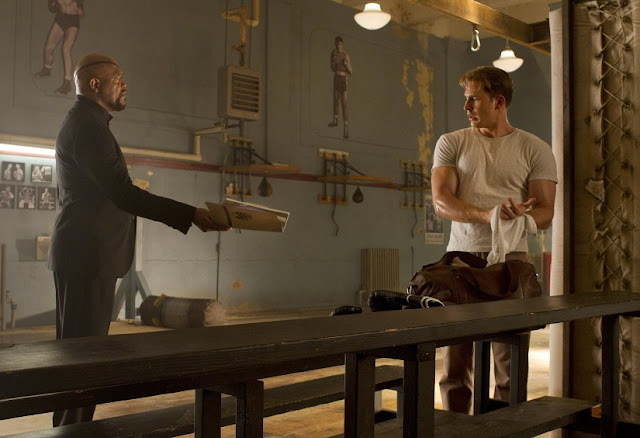 There's very strong line of continuity between Steve's costumes in Captain America and The Avengers. When we first see him in the gym with Fury, the whole aesthetic is very retro -- the old-fashioned gym; the dusty sepia-tone colour scheme; the fact that Fury gives him an actual paper file. The detail of the paper file prop jumped out at me at once because it's so clearly something that Fury has tailored to Steve's comfort level -- or what he perceives Steve's comfort level to be. It made me think that Fury/SHIELD is making a conscious effort Steve feel more at home, and I'd hazard a guess that those attempts are doing more harm than good. At the end of The First Avenger when Steve wakes up in the 21st century, SHIELD has constructed a special 1940s bedroom for him in an attempt to slowly acclimatise him to the "future" -- which, of course, backfires. Although Fury mentions in the gym scene that Steve has his own apartment, I suspect that it's closely monitored by SHIELD, as is every aspect of Steve's life. And I suspect that Steve knows it. The mysteriously deserted 1940s-friendly gym is the first clue; the subtle weirdness of his casual clues are the next. 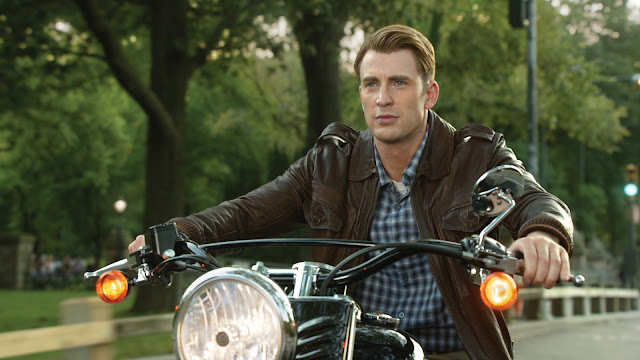 Steve's casual clothes are just really old-school. I don't believe for a second that he bought these himself because a) I doubt that SHIELD would allow him out into the chaotic environment of a 21st century shopping mall, and b) finding this type of outfit would actually be quite hard. His main casual clothes (see the first picture in this post) are high-waisted pleat-front suit trousers -- which aren't typically available in anything other than "70-year-old grandfather" dimensions, decidedly not the Adonis-like frame of Steve Rogers -- checked shirts, and an old-fashioned brown leather jacket with epaulettes. That jacket is way too specific in terms of quality, fit, and style for Steve to have been able to find it himself a few weeks after being defrosted. I'm very interested to see how his costumes evolve over the course of the next movie, because continuing to wear 1940s-esque clothing walks a fine line between comforting homesickness, and denial. Once he's truly autonomous from SHIELD and able to do everyday things like go shopping, will he stick with what's familiar or head straight for the future? I actually think it'd be a great characterisation decision if they had him leaping headfirst into 21st-century styles while retaining more retro tastes in things like music and movies.
The direct continuity crossover between the two movies is Steve's white t-shirt/khaki trousers outfit. When he emerges from the magical hot-body steroid machine in the Captain America movie the first things he puts on are the white t-shirt and khakis, which are then mirrored in the final scene when he escapes out into 21st century New York while dressed in a SHIELD t-shirt. At the beginning of Avengers we see the same outfit, this time with khaki workout pants -- which, don't tell me SHIELD didn't personally provide him with those because when was the last time you saw someone wearing khaki workout pants? And it's a great outfit for reasons other than continuity: it implicitly resembles military-issue clothing, the plain white t-shirt is the archetypal wholesome American staple item, and the colour scheme neatly slots into Steve Rogers' sepia/brown/beige palette. 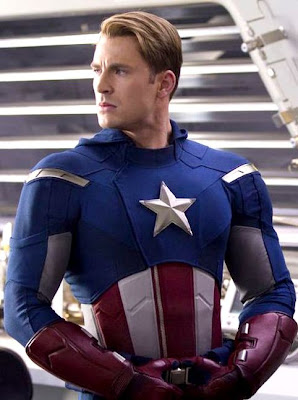 This may seem like a stupid statement coming from someone who writes about both costume design and superheroes, but... I find it hard to write about superhero costumes. Comicbook costumes look cartoonish and ridiculous in real life, but the "realer" you make a live-action adaptation of a superhero comic, the less fun it is -- and the less likely you are to retain the core fanbase. Characters like Batman and Iron Man get a pass because their costumes are functional and double as body-armour, but Superman and Spider-Man? Sorry bro. I can watch it, I can enjoy the hell out of it, but I'm not going to waste time trying to legitimise how and why someone would make a perfectly-fitted spandex outfit for themself and then wear it in public. Especially in the context of urban crime-fighting as opposed to, say, lucha libre wrestling.

Captain America kind of falls into this category because his costume is, fundamentally, a 1940s Americana cheerleader uniform with extra pockets around the waist for bubblegum and hair gel (or whatever the hell it is that superheroes keep in their utility belts). That scene where Agent Coulson tells Steve that "the world needs a little old-fashioned" is enough for me, really. The body-armour and boots they've incorporated into the basic blue body-suit are feasibly practical-looking, and although the cowl isn't exactly great I'd like to see how you would go about designing a winged blue helmet that looks serious and manly. Cap is a cultural icon, a guy whose photo appears on trading cards, a symbol of a naiive, nostalgic idealism that never really existed even in the 1940s. He doesn't need to look cool. And the fact that he willingly puts on a stars-and-stripes catsuit and a helmet with a giant "A" on the forehead is proof enough of his beautifully earnest dedication to his job.
I saw Avengers with two guy friends of mine, both of whom are well aware of my love of overanalysing movies and, more specifically, my sensitivity about the sexism present in most geek/superhero franchises. When we were coming out of the cinema, one of them asked if I'd been bothered by the way the film had displayed Black Widow and her catsuit. To which my reply was, basically, "???" because not only was The Avengers unusually equal-opportunities with regards to eye candy, but most of its prequel movies were as well. Both Thor and Captain America: The First Avenger featured sensibly-dressed, awesome female characters checking out the shirtless male heroes in what was pretty much a textbook reversal of the typical male-gaze "pan the camera up and down her body before she gets to say a line" shit you see in most blockbusters. I mean, I don't pretend to be an expert in cinematography, but Steve's first appearance in Avengers is a lingering shot of his ass flexing while he pummels the crap out of a punch-bag.
Black Widow may be wearing a catsuit, but so, more or less, are Captain America and Hawkeye, and no one of those costumes or characters is shot in a way that seems any more gratuitous than the others. Joss Whedon isn't perfect, but I feel that his policy regarding eyecandy visuals is indicative of his attitude towards his audience in general. ie, that his thought process is more like, "Who is my audience, and what would they like?" rather than the more typical Hollywood filmmaking attitude of, "This is the audience we think we're writing for, and this is what we've decided they enjoy". Which is how movies like Battleship and Catwoman get made.

Next up:  Black Widow, Hawkeye, Thor, and Loki!

Links
If there's no such thing as a vintage Captain America venereal disease PSA then I'm going to be so disappointed.
The real contents of Batman's utility belt.
Posted by Hello, Tailor at 12:11