This review may be a little on the dodgy side because I wrote it through a veil of tears while pouring chocolate truffles and absinthe directly into my mouth and smoking a cheroot in a ten-inch-long holder. GUYS, I JUST LOVE THIS COLLECTION A LOT, OK. Gaultier's a triple-threat expert in the field of awesome yet faintly ridiculous haute couture, his main failing being the restrictive nature of his influences. This season, as with so many of his previous collections, Gaultier was inspired by Victorian dandies, vintage corsetry, tuxedoes, and classic Indian fashions, but even after thirty years in the public eye he still seems to be able to turn out new ideas for stunning couture.
The show opened with Erin O'Connor in a top hat and tails, dressed in an homage to George Sand. Gaultier has long enjoyed playing with gender-roles in his shows and even though his new Menswear collection was revealed only last week, this Couture show included new "menswear couture" items as well as several womenswear outfits worn by male models. 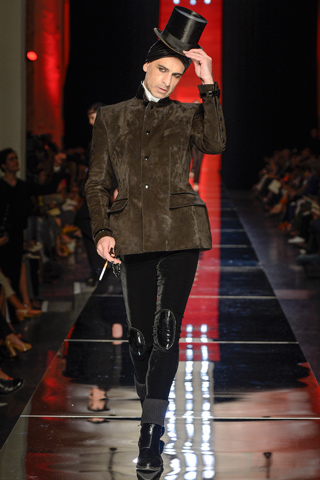 Tanel Bedrossiantz has modeled in over eighty of Gaultier's shows now, and as he ages he seems to grow more and more vampiric in appearance. Tanel commands a certain fearsomeness that can't quite be managed by the younger, prettier male models, which is exactly what Gaultier's shows need -- something to leven the slightly cheesy Moulin Rouge air for which he is so well-known. 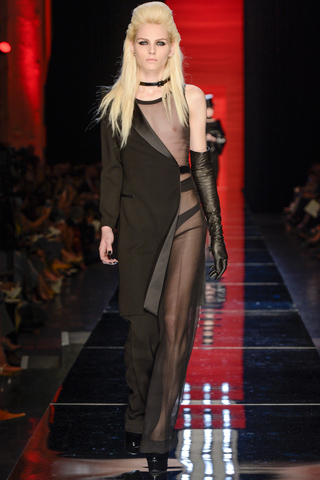 It's unclear whether Andrej Pejic's first outfit was from the menswear or womenswear department -- perhaps intentionally so. On one side it was a relatively average dinner-suit, but the other side was completely sheer with an elbow-length leather glove. Even the shape holds no clues, because this season Gaultier almost entirely abandoned his love of corsetry in favour of a looser, more masculine silhouette for the womenswear. Corsets, in fact, were only seen on the men, with slight hourglass silhouettes being added to the suit-jackets through rigid structure-work and clever tailoring. 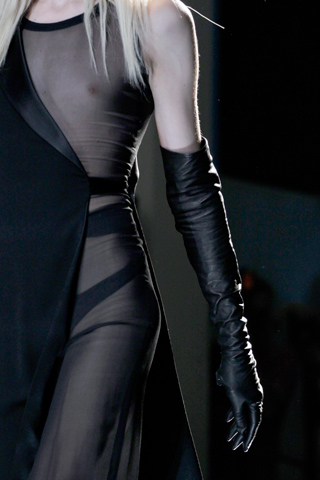 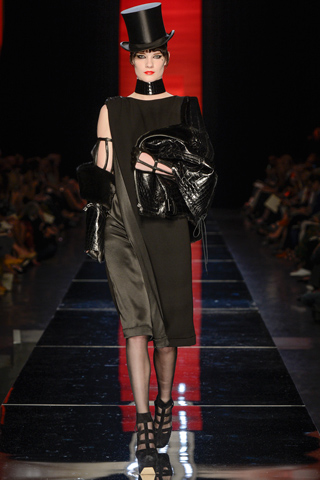 This collection wasn't so much a celebration of fresh creativity as it was about quality. While dandies and 19th-century decadence are by no means a new topic in the world of high-end fashion, a show like this proves that Gaultier can provide consistent excellence without resorting to gimmickry. 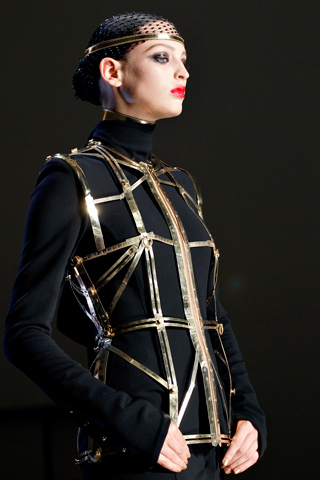 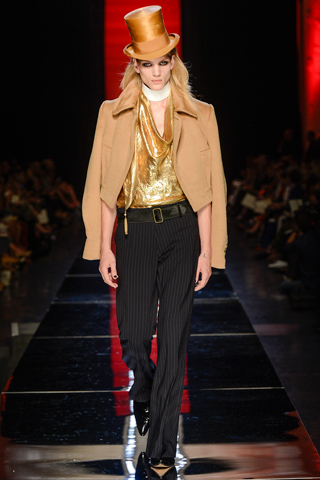 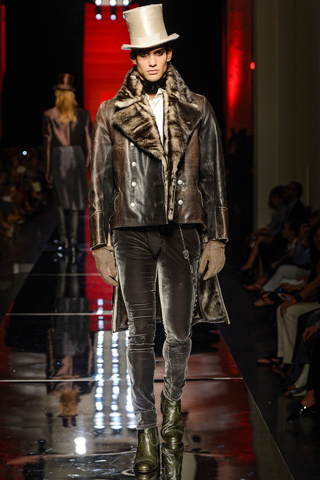 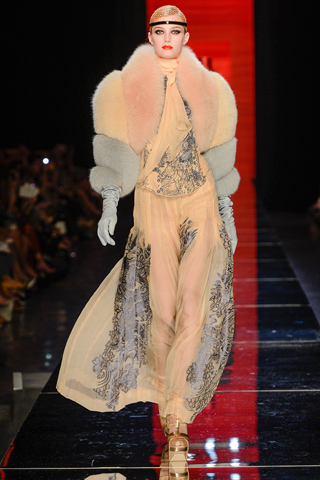 This is the kind of textured, luxurious couture work that makes me miss Christian Lacroix. 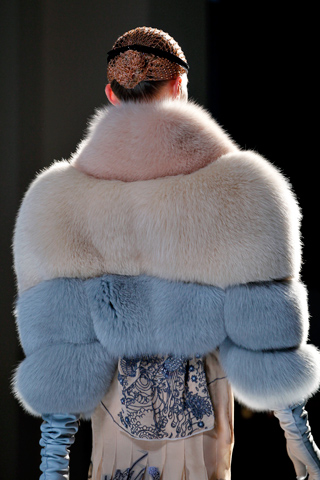 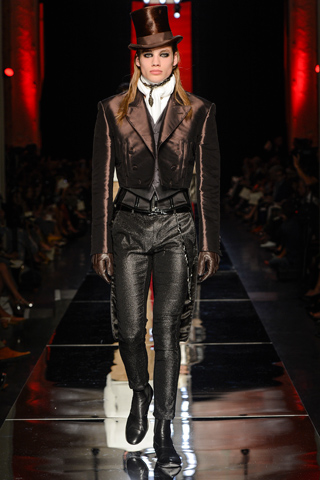 The one low point of the show was, for me, this purple tailcoat modeled by Erin O'Connor. It's a little too 1970s Vegas magician compared to the 19th-century sumptuousness of the rest of the collection. 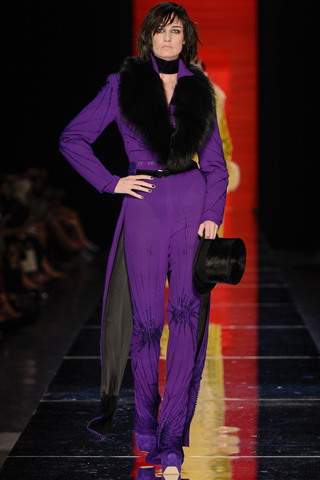 The eveningwear ran from late nineteenth to early 20th century, with some outfits almost reaching flapper proportions. Fortunately the styling was such that most of the gowns didnt fall into the period-movie costume trap, although the colour scheme did remain securely in vintage tones of red, gold, and pale blue-green. 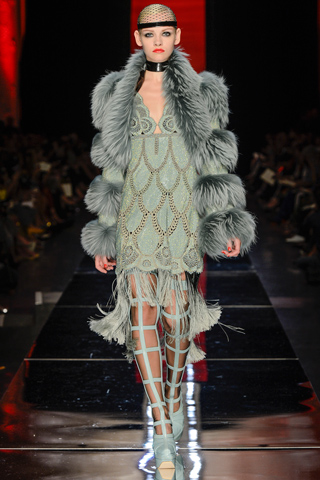 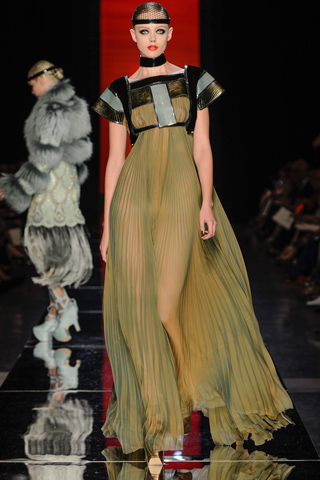 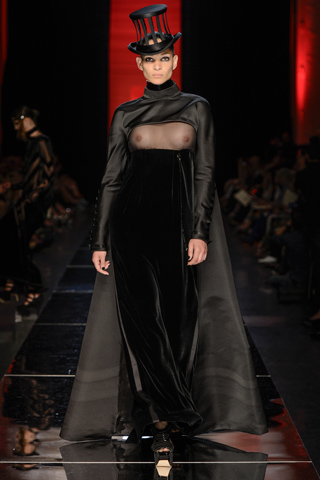 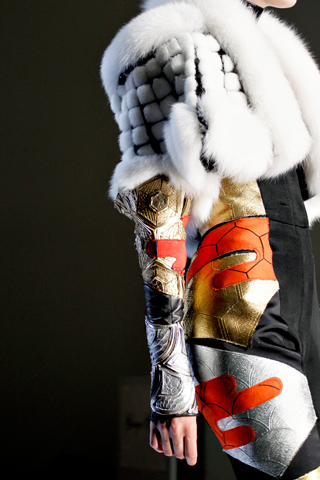 In among the out-and-out period pieces were some outfits that were harder to define, but no less beautiful for it. One of the things this season really made me appreciate was Gaultier's ability to balance a show: not too many costumey pieces, but enough that the collection seemed to vary widely from beginning to end. While the tuxedo-inspired suits (for both men and women) were relatively recogniseable as dandy-wear, some of the gowns seem to go straight for the faux-medieval trends of the early 20th-century aristocracy, and others had hints of angular Art Deco imagery: 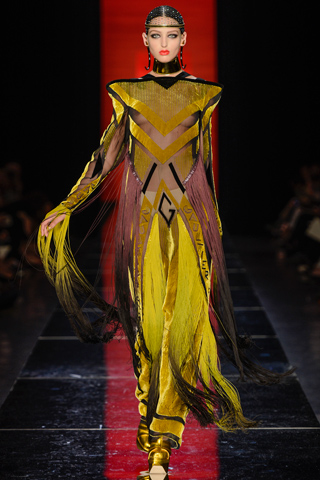 Sidenote: My new hobby is printing off 1000 copies of this photo of the best spats of all time, folding the photos into a giant origami bed, and then rolling around on the bed until I die. 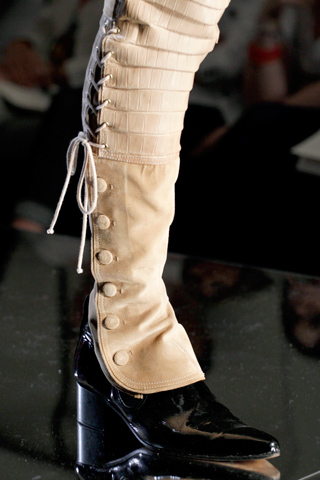 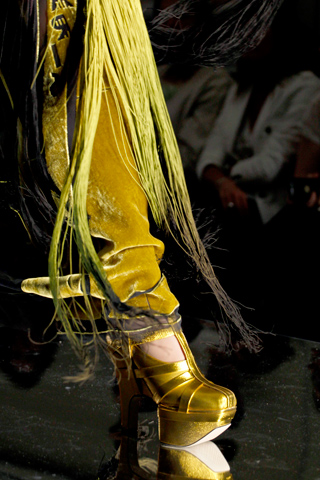 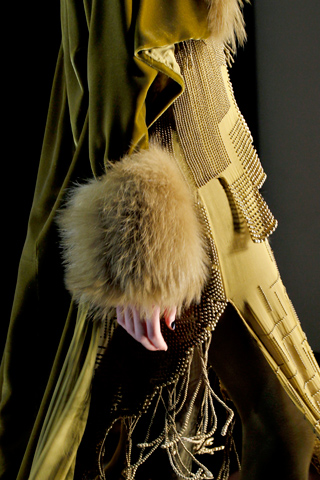 While I usually dislike strapless body-suits, this gold outfit modelled by Karlie Kloss was so stunning I had to include it. The cape photographs so beautifully while in motion that it makes me sad this piece is almost certainly one of the ones that'll be bought up by a collector, never to be worn again by anything other than a mannequin. 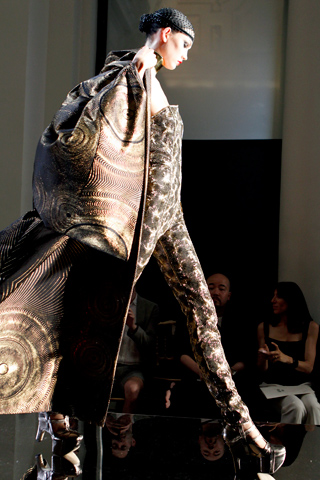 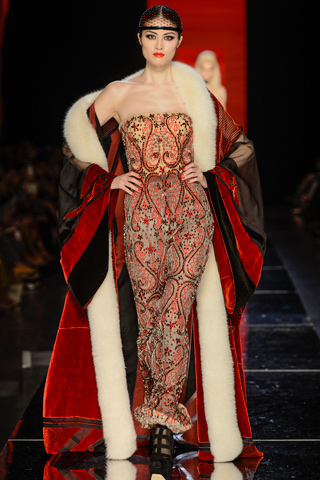 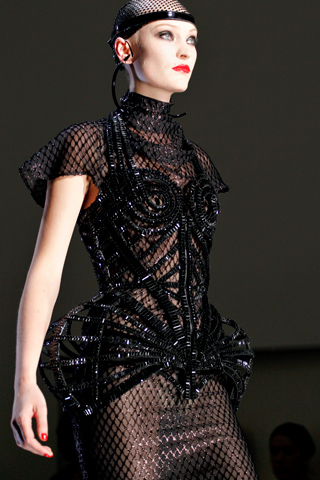 These exterior-framework outfits were reminiscent of early Thierry Mugler or Gaultier's own designs from the '80s and '90s -- stripped-down corsetry and crinoline hooping, with a fetish edge. The gold bustier dress even seems to include some kind of chastity belt, and looks terrifyingly inflexible. 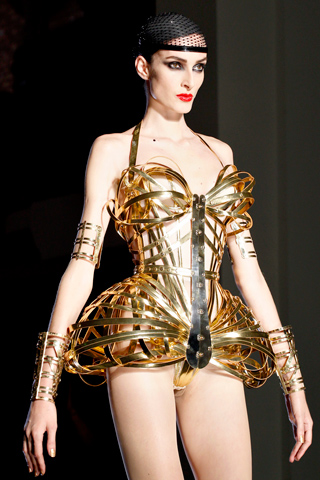 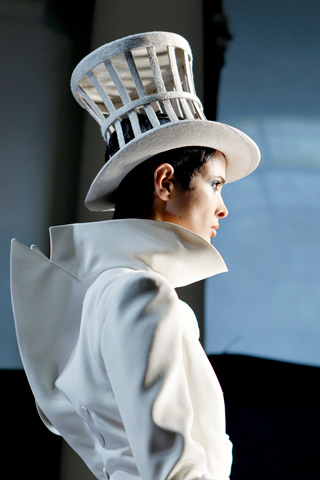 As is traditional, the show closed with a bridal gown, this one worn with a deconstructed top hat and made entirely from solid white fabric. Even this was dandy-influenced, with tuxedo lapels swooping down the model's back to join the floor-length skirts. 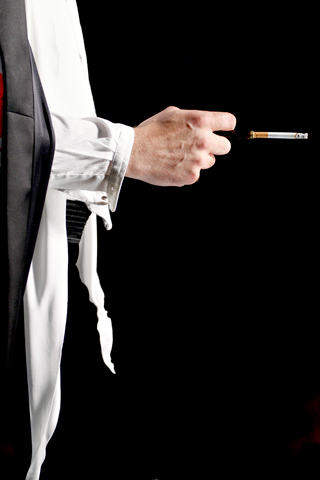