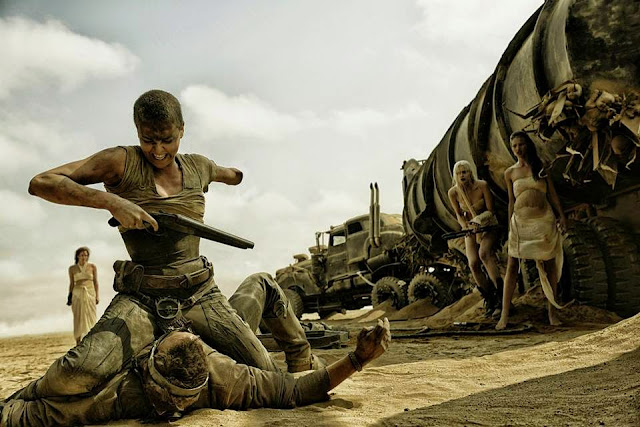 It's appropriate that a film about searching for life in the desert should be so spiritually refreshing, an oasis in Hollywood's bland landscape of identikit blockbusters. I'm not just talking about Fury Road's overt feminism, but also the way it tells a story through action, how it eschews clumsy exposition, and how it conveys a powerful narrative message while still being beautiful and entertaining in a thoroughly accessible way. It's a perfect iceberg movie: characters with very little explicit backstory or even dialogue, existing in in a highly stylized moment, and yet rich with meaning and subtext beneath the surface.

We Are Not Things

I loved the way Fury Road kept coming back to liquids. Water, mother's milk, blood, gasoline -- and how they were bartered from person to person with different meanings. Max being dehumanized as a blood bag for the War Boys. The women at the Citadel being milked by machines but eventually freeing the water supply for the people in the wasteland below. Max later deciding to give Furiosa his blood, after he regained his humanity. (BTW, I particularly enjoyed this as a counterpoint to the classic action hero method emergency medical care: Punching dead people in the chest until they wake up, possibly while yelling, "Wake up, dammit!" Blood donation was far more effective, highlighting Max's character development and the huge difference between this scene and the way he was treated like livestock at the beginning of the movie.)

Not forgetting the endless fights over gasoline, which can basically be summed up as:


My friend, after seeing Fury Road: They spend the whole movie driving around fighting over fuel they need to drive around and fight over fuel, it's just so pointless!

Me: I believe that's what we call a "metaphor."

And, of course, the first time the Wives appear to Max, they are bathing in fresh water in the middle of the desert. 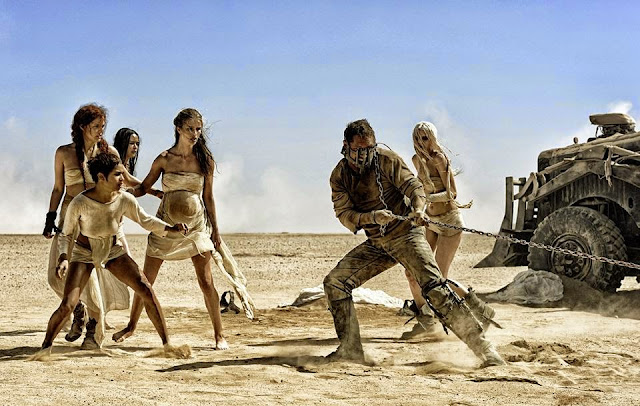 I've seen a number of reactions to this scene, including displeasure that the female characters were introduced in a "sexualized" way. I don't agree with that interpretation, although I understand how it could be seen as an eye-candy moment: a group of beautiful women bathing while wearing skimpy clothes. In the context of pop-culture, this kind of scene is always sexy. We're conditioned to see it as such, regardless of context.

In that sense, I found the Wives' appearance surprisingly thought-provoking. Because women's bodies should not be inherently sexualized, no matter what they're wearing. All we actually see is the Wives washing dust from their bodies and getting rid of their chains and chastity belts, before freezing in fear and apprehension when Max comes into view.

It's certainly not a sensual ~shower scene~ and there's no male gaze moment where the camera hints that the protagonist wants to bang some hot chicks. In fact, no one expresses any kind of sexual desire in the entire movie, because they're all too focused on staying alive -- not to mention being incredibly traumatized.

When Max stumbles across the War Rig his only desires are water and escape, so you can easily interpret the appearance of the Wives as a "WTF LOL" moment. A sudden descent into surreality as Max shifts from a world of torture and horror into a world where beautiful, peaceful people are washing using clean water. From Max eating a live lizard to the Citadel's blood banks to the first high-octane car chase, this is the first sign of humanity and calm in the blasted hellscape of the desert.

With Immortan Joe as an avatar of toxic masculinity and greed, the main antagonist of Fury Road is the concept of objectification. Each of the heroes' personal journeys are about regaining their own humanity and agency, either through empathy (in the case of Nux and Max) or escape. So, even if you dislike the Wives' costumes or their introductory scene, they were definitely fully-fledged characters by the end of the film.

Instead of going the typical action movie route and ignoring character development in favor of stunts and special effects, Fury Road developed its characters through action. This movie went eons beyond our normal expectations, where we grudgingly award points for a well-written female character or a vaguely interesting backstory. It left that kind of judgement in the dust, a two-hour car chase with more female characters than men, including a pregnant pacifist messiah and a motorcycle gang of elderly desert cowboy grandmas. It's like this movie came from another damn planet.

Every killer car in Mad Max: Fury Road, explained.
Art by comics artists inspired by Fury Road
Interview with a 78-year-old actress who played one of the Vuvalini
Charlize Theron's stuntwoman and Tom Hardy's rehearsal double fell in love on set.
IMDb's list of Fury Road character names (you will NOT be disappointed)
How they created the flame-thrower guitar, which WAS NOT a CGI trick
18 minutes of raw footage from the set of Mad Max: Fury Road