This post is gonna be wayyyyy less in-depth than the one I wrote for Henry IV Part 1 because nothing happens in this play. I'm serious. Maybe there was some heavy editing going on or something but as far as I can tell the only things that happen in Henry IV Part 2: Electric Boogaloo are:
It was like one of those situations when there's a really awesome, successful movie, and then someone's like, "OK, let's get a sequel up in this joint!" except instead of writing a whole new story they just erase most of the character development from the first movie and try to do it all over again a second time. Although this time round there's little to no plot, and the supervillain was defeated at the end of the last movie so instead of a battle there's just an awful lot of tragicomedy scenes involving an old fat conman slowly sinking into gout, despair and failure along with his new collection of comedy sidekicks. I don't know much about the circumstances surrounding the writing of this play, but I can easily imagine Queen Elizabeth writing to Shakespeare all, "More of this Falstaff fellow, my man! He makes one LOL!" and Shakespeare sobbing into his inkwell as he tries in vain to think up something interesting that happened to Henry V in the years leading up to his coronation. 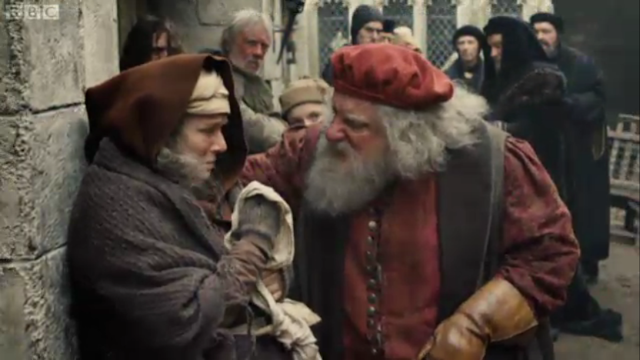 Unlike in Part 1 when Prince Hal was front and centre as a modern coming-of-age protagonist, Part 2 saw Falstaff in the foreground as a kind of decaying Captain Jack Sparrow figure, unwillingly succumbing to his many debtors in his old age. Simon Russell Beale struck a pretty good balance between playing a sympathetic Falstaff and being outright unlikeable (the first being rather difficult and the second being all too easy), partially because the people Falstaff was taking advantage of were so damn stupid. I spent a significant chunk of this play throwing rotten turnips at Mistress Quickly's head because she just kept getting taken in by Falstaff's wafer-thin scams. I wanted to like her because I'm a Strong Female Character myself and feel a duty to the sisterhood, but sisterhood only goes so far when girlfriend is letting Falstaff eat her out of house and home again instead of letting him be sent to debtor's prison. Also, the girl who hangs out in Mistress Quickly's tavern? Why is she into Falstaff all of a sudden! He obviously has no money, he's super unappealing in every conceivable way, and just last week she was getting to make out with Golden Prince Hal himself! There's a pretty strong implication that she's at least a part-time prostitute, but that kind of just brings me back to the whole "Falstaff has no money" thing. On the whole, the person who consistently had the best reaction to Falstaff was this guy: 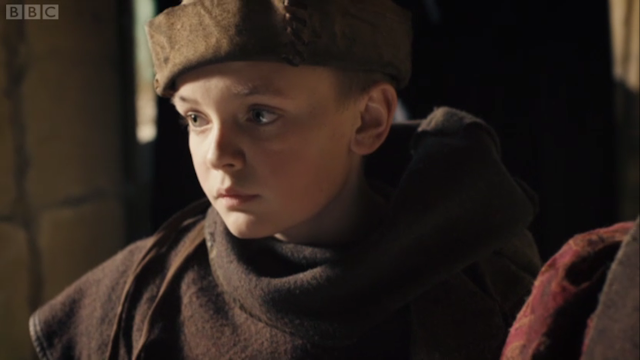 This kid was the Henry IV Part 2 equivalent of the hilarious reaction-shot characters we saw in Richard II. Throughout Falstaff's gradual deterioration into the realm of true awfulness, this boy was on hand to remove Falstaff's boots and pour him more wine, apparently for no pay whatsoever. (Which, come to think of it, sounds alarmingly similar to the type of internships my generation are currently suffering through en masse.) All the while he is barely restraining himself from rolling his eyes at every person around him, presumably because his keen young mind is as-yet unmarred by decades of alcoholism. I have no doubt that he'll grow up to be an excellent Calm Thou Tits character, of which this play has many. Shakespeare loves to include these guys: bit-part characters who show up to say "Are you really sure you want to murder the King?" whenever one of the protagonists is foaming at the mouth about love, kingship, patriotism, etc. Henry IV Part 2 saw the old King Henry followed hither and yon by a whole troupe of Calm Thou Tits courtiers, including Ser Jorah from Game Of Thrones. (Which was super exciting for me because whenever Ser Jorah appears onscreen in Game Of Thrones, I immediately sacrifice a gallon of tears to the gods of romance because his slavish loyalty to his Khaleesi is food for my soul.)
Aside from our nameless hero, Falstaff's Boy, this was a play about distinctly unappealing people. Prince Hal's evolution from carefree adolescent to royal hero in Part 1 seems to have regressed a little in the interim, leaving him to lounge around with Poins while he waits for father to die. I feel like the Hal we see this time round comes across a lot more feckless because we've seen that he can do better, but he still goes back to his old ways of spying on Falstaff and failing to live up to his duties when his father needs him the most. He tells Poins that he's upset about his father's illness, but his younger brothers are all either by his father's side at court or busy fighting rebels while he and Poins oil each other up and giggle. When it finally comes to it, Hal's rejection of Falstaff gives every appearance of being needlessly cruel. All through the play King Henry's messengers have been hounding Falstaff down as a bad influence on Hal when he and Hal are barely even in touch any more. Falstaff is a moocher and a con-artist, but Hal really doesn't seem like someone who needs outside help to get into trouble. 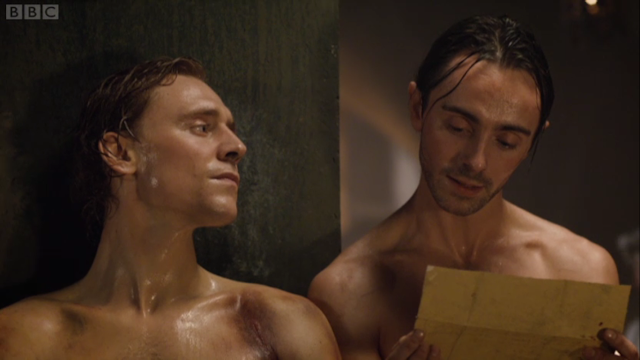 If you enjoy scenes made out of pure, nail-biting frustration, look no further than Prince Hal taking the crown from his father's pillow. Look, if you're going to take the crown from your father, check to see if he's dead first! This is basic shit, dude! As it is, there's this long scene that contained what I can only imagine were some potentially enthralling emotions and soliloquays and what-have-you, but the audience are paying way more attention to the door because clearly the still-breathing king is about to burst in at any moment and demand his crown back. By the time Jeremy Irons did lurch into the room, my friends and I had all practically shouted ourselves hoarse from yelling "Take it off! Take it off!" at Prince Hal. And not in a Magic Mike way. 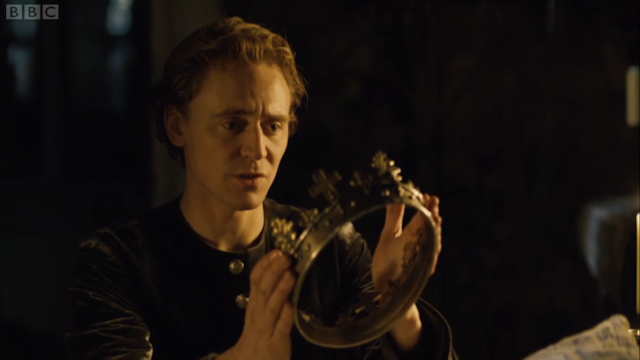 I have no idea if Hal's brothers have a larger role in Henry V, but this scene really made me hope that they do. Prince Hal, who up until now has spent the majority of his time getting drunk and playing pranks on people (interspersed with semi-regular bouts of navel-gazin), has rolled up to the palace to ponder the meaning of kingship in the couple of hours prior to his ailing father's demise. And then he nabs the crown before his dad's even kicked it. I realise that this is a powerful scene and that the brilliant thing about Hal is that he isn't quite ready for power, and that power changes him irrevocably, but -- what do the brothers think? Are they bitter about the fact that they've been standing by their father all this time while all Hal has to do is waltz in and claim the throne? What? Has anyone ever written a fanfic play about Prince Hal's little brothers? Is it like Game of Thrones? Enquiring minds want to know. 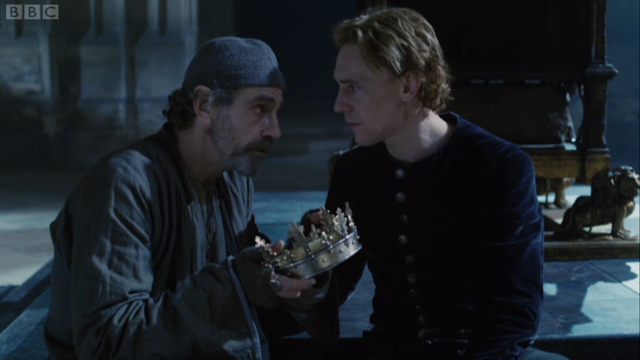 To no surprise whatsoever, Jeremy Irons' role was even more impressive here than in Part 1. Now close to death, his frame seems to shrink in on itself, partly helped along by the fact that he spends most of the play in ragged nightgowns rather than the more imposing robes of office he was wearing in the days before Hotspur's rebellion. Also he only appears at night, murkily lit to a grey pallor as he staggers around the throne room by himself, lonely and exhausted. Dressed in a soft, closely-fitted velvet jacket, Prince Hal looks even more lithe and youthful by comparison, and far more subdued than he was before he entered the palace. The most significant difference, though, was the lighting. The scenes we see of Henry IV's rule all seem to take place during the witching hours, with everyone's skin looking drawn and haggard in the grey-blue light. As soon as Hal is crowned, though, the throne room takes on the red-gold tones it had during Richard's reign, and Hal himself seems to glow with youth and vitality. 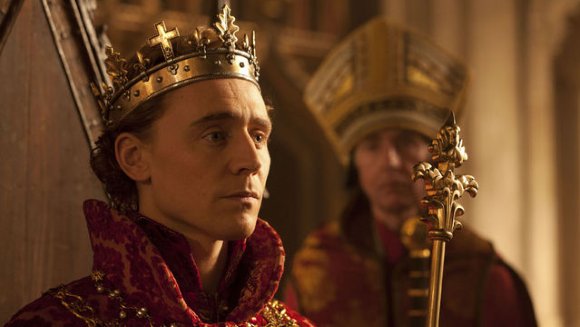