Entertainment Weekly just posted the first pic from the new Wonder Woman movie, and it's stressing me out because I'm worried these ladies are gonna get stabbed in the junk. 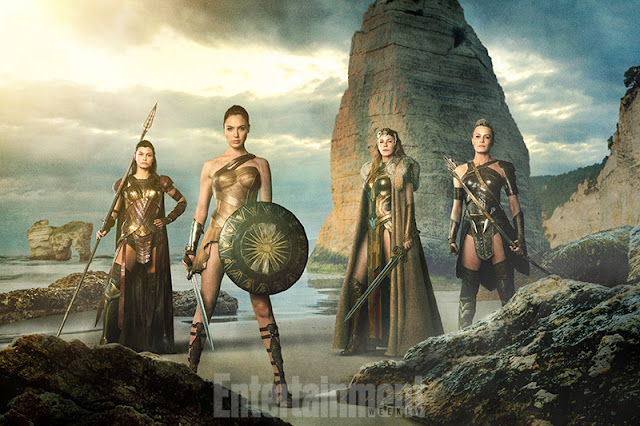 The way I see it, there are two options here:


Now, I'm the first to admit that there's no such thing as a ~practical superhero costume. Their job is to look cool and distinctive, not to make perfect rational sense. Unfortunately for Wonder Woman, her wardrobe choices are colored by decades of sexist garbage movies where women wear skimpy outfits to satisfy our old friend the Male Gaze. In that context, this photo could probably benefit from... some pants, basically. Maybe just one woman wearing pants.

Analysing ~sexualized movie costumes is a real can of worms, because you very quickly become embroiled in the issue of shaming real women for their fashion choices. However, there's a very big difference between a real person deciding to wear a strapless metal bathing suit (do what thou wilt!) and a movie studio marketing its first female action hero in the same kind of outfit. These costumes do not exist in a cultural vacuum.

If you enjoy this blog, please consider me on your Hugo ballot! (Or other non-Hugo awards that I don't know about!) To nominate for the 2016 Hugos, you either need to have attended Worldcon in 2015, or have bought a ticket for Worldcon 2016 or 2017. Or you can buy a "supporting membership," which lets you vote on the Hugos (so ~prestigious!) and get ebooks of the nominated books/short stories.

For the "fan writer" category, you can consider anything I wrote in a ~fannish capacity. So, this blog, along with my Tumblr and Twitter, etc. Here are some highlights from 2015!

The new heroes of Star Wars: The Force Awakens. I'm looking forward to writing more about Star Wars this month!

What was up with that Black Widow scene in Avengers: Age of Ultron? My most ~controversial post of 2015, apparently.

Age of Ultron: The empire of Tony Stark On Age of Ultron's imperialist overtones, and Tony Stark's status as a burgeoning supervillain.

Review: Mad Max: Fury Road The most important movie of 2015.

For my other writing, head on over to Tumblr, where I host my more casual posts & commentary.

P.S. My friend Elizabeth Minkel and I recently launched a weekly newsletter for fanfic recs (a new fandom or fic theme each week!) and cool fandom news/links. You can sign up here, and check out previous issues here. It's pretty great!