Snow White & The Huntsman: The prince doesn't get the girl; the girl gets the kingdom.

Previously: Snow White & The Huntsman: How to tell a fairy story.

Thanks to last week's new releases, my Charlize Theron viewing history is now all the way up to three films total. (The first was Aeon Flux, which, yeah, ask me about that sometime. It's the worst.) I won't be posting a review of Prometheus until it's been out for a little longer, but the one thing I will say is that if you're planning on seeing it, you should read this (non-spoilery) warning first. Following the advice therein will, I think, improve your Prometheus experience. I was very excited about Snow White & The Huntsman because the marketing was so gosh-darned appealing (surprisingly so, considering the content and audience) and I am of the opinion that Kristen Stewart and Charlize Theron should be the next Bogart and Bacall. Unfortunately, SWATH was nowhere near as good as I expected, dragging on longer than it should have done and including several completely superfluous characters. In some respects it succeeded (ie, visual effects and Awesome Ladies, both of which featured prominently in the trailer) but the end result was an action movie that could've done with more action, and a drama that needed tighter drama.

I'm inclined to be biased in favour of SWATH because it's so clearly Bechdel-approved. It's a story about women and the problems they face because of the way women are socialised to think about their own power and beauty. The hero and the villain are both women, and neither of them resemble Kate Beaton's Strong Female Characters or the kind of emotionless kickboxing androids that appear in so many other genre movies. The prince doesn't get the girl; the girl gets the kingdom. 2012 has been a fantastic year for female-led sci-fi/fantasy movies, and my only serious issue with the feminist themes in SWATH is the way Ravenna's relationship with beauty and power was portrayed. While too much explanation will inevitably ruin any story that hinges on "magic", the complete lack of a coherent explanation regarding Ravenna and Snow White's various intangible powers meant that their ultimate standoff packed far less of a punch than it should have done. It's not often that I complain about there being not enough exposition in a blockbuster movie, but this was such an easily-solved problem that a minute or so of flashback montage might well have sorted it out.
Ravenna's belief that a woman's youthful beauty is a direct source of power means that she ends up sucking the land dry, bathing in milk while peasants starve and faceless medieval Stormtroopers serve up supermodel Lily Cole as a royal snack. Kristen Stewart's Snow White, on the other hand, shows no signs of knowing or caring what she looks like, and is the avatar of some kind of Aslan-like power that causes flowers to blossom as soon as she comes near. But if her inherent goodness (or divine Queenship, passed down from Mum?) is so strong that it charms the fairies from the trees and Princess Mononoke's forest-spirit from the water, how come there was no evidence of this in the cell she was locked inside those years? Was she unable to photosynthesise? 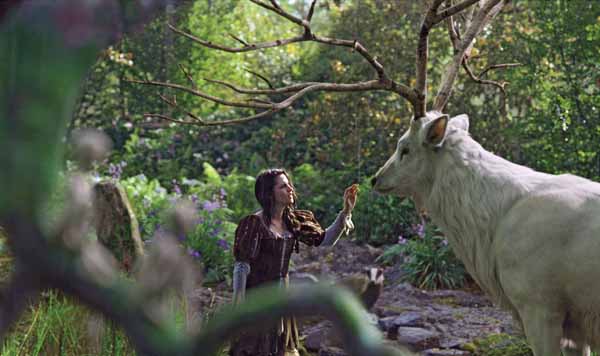 I couldn't help but compare this aspect of the film unfavourably to Stardust, a movie that, while different in tone, stars a similarly image-obsessed witch as the villain. Another place where SWATH fell down in comparison to Stardust was the cast of cameo characters, headed up by Bob Hoskins as a blind dwarf soothsayer. Hoskins had the unenviable role of saying things like, "She is... the one," in portentious tones while making it abundantly clear that he was only there for the paycheque. While the ghostly princes in Stardust provided witty comic relief, the dwarves in SWATH (all of them famous character-actors, and all utterly wasted in the roles they were given) were embarrassing and could just as well have been cut from the film entirely. Not to mention how uncomfortable it was to realise that eight average-sized actors had been hired to play dwarves, something that seems dangerously similar to racebending.

If this post seems overly negative, it's only because I had such high hopes for this film before I saw it. In fact there were many things that I did enjoy once I got past the clunky pacing and the inexplicable inclusion of terrible characters like Ravenna's ambiguously incest-y albino brother (ugh). Charlize Theron's intense/camp supervillain meltdowns were awesome, and I have a lot of admiration for Kristen Stewart's ability to work so well with what she was given. SWATH would have benefited hugely from a scene or two where Snow White either learns some more tangible skills or gives a Game Of Thrones-esque speech to her troops before battle, but Kristen Stewart still came across as an appealing and unusual hero. This film had many flaws, but casting wasn't one of them. I haven't seen Twilight, but I'm beginning to see why Stewart was chosen to be Bella Swan. I've heard that Bella is a character whose success hinges on the actor's ability to silently emote for five movies in a row while still retaining audience interest, and having seen Kristen Stewart's Snow White I'm inclined to believe that she can do it. I only wish that she'd been given more dialogue in this movie, for all that she managed to wring as much emotional truth from her running-and-fighting scenes as possible. 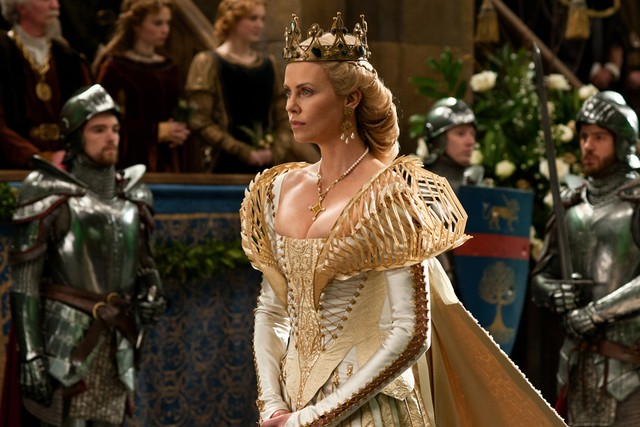 This was a Costume Movie. It's been out for less than a week and I've already had several people ask me if I'm going to review the costumes, but I honestly don't think there's much to say about them other than that they were stunning. The strongest aspect of SWATH was the visuals, from the supernatural forests to the hyper-real troll attack to the scene where a flock of ravens coalesce to form an oil-slick filthy Ravenna wearing a glistening raven-feather dress. For anyone with any interest in clothes, Ravenna's gowns are the standout costumes, and I suspect that the designer (Colleen Atwood) is a shoo-in for another Oscar nomination. Combining a Marie Antoinette-like opulence with spiky, venomous imagery, Ravenna's loosely medieval-inspired gowns are destined for fashion magazine photo spreads. This is the kind of costume design that works very well in a broad, "that looks awesome" sense because Ravenna's clothes are so obviously beautiful and intricately complex, even out of context. I don't mean to imply that this type of costume design is somehow less worthy than subtler, more character-specific costuming -- just that it's a good example of the kind of attention-grabbing work that gets nominated for awards year after year.
All these ferociously uncomfortable-looking costumes fit well with Charlize's over-the-top, campy performance, and serve to highlight Ravenna's vanity and lack of care for the fate of the less fortunate. Thousands starve while Ravenna sits in her chambers wearing 30lbs of silk and reapplying her blood-of-virgins lipstick. I like to imagine that after she's drained a young woman of her life-force, her victim is then put to work in a sweatshop full of other young/old women sewing thousands of sequins and feathers onto Ravenna's next sartorial masterpiece. The white wedding dress she wears at the beginning of the film is almost "historical"-looking and comparatively soft in appearance, but once she becomes queen her own style takes over and it's sexy glam-rock Nazgul corsetry from there on in.
While Ravenna's gowns were beautiful examples of craftsmanship and design they were, in a way, the easy choice. The queen in Snow White has to look evil and sexy and rich, whereas Snow White herself is a far more difficult character to quantify. The dirty hand-me-down dress, though, looked great on Kristen Stewart, and handily transformed into a more practical tunic/leggings outfit with a bit of help from Thor's the Huntsman's knife. And her practical, flat-chested armour? Wonderful. I was actually disappointed when she finally reached her victorious coronation moment at the end and had to wear a Queen dress instead.

Kristen Stewart's Snow White and Katniss Everdeen from The Hunger Games are the only mainstream blockbuster heroines I can think of who really have no idea of personal vanity or prettiness, which is kind of marvellous. Now all we need to do is work on making more movies like this that don't implicitly demonise women who like to dress up and look pretty.

I have mixed feelings about the love-triangle situation. I find it refreshing to watch a movie like this and not feel that a romance subplot has been shoehorned in just for the sake of it, and I appreciated that the Huntsman didn't immediately abandon his drinking problem and the memory of his wife as soon as he began to have feelings for Snow White. However, the ending already seemed abrupt enough without some hint of a romantic resolution, especially since it might have balanced out the creepily non-participatory nature of Snow White's earlier kisses. Even though I suspect that those kisses were meant to be a cut-and-dried "true love's kiss" deal, I'd rather interpret them as being about trust. When Snow White first escapes, she wants to get to William because she has nowhere else to turn, and although she accepts the Huntsman's help she still keeps her cards close to the chest. Her trust in him grows organically, and is finally proven when he shows up by her side when her army attacks the castle. The reason why the Huntsman's kiss works while William's fails is because William's feelings for Snow White are mostly based on guilt and childhood obsession, whereas the Huntsman actually knows Snow White as an adult.

(Alternatively, the kisses were just coincidental and Snow White woke up of her own damn accord because the Force is strong with her.) 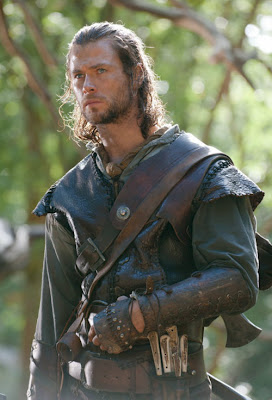 The Huntsman has the Aragorn-esque look of a man who smells really intensely terrible but is handsome enough to get away with it (because we can't smell him). When we first see him he's swilling ale and being pushed into a trough full of dirty water, and for the rest of the movie he marinades gently in his no-doubt old and sweaty leather jerkin. The men of SWATH are very obviously second-tier to Charlize Theron in terms of costume design, most of them clad in the kind of dirty faux-medieval fare one would expect. William is more of a traditional knight-in-shining-armour than the more lower-class Huntsman, but both of their costumes fall into the nonspecific medieval fantasy category.
A friend pointed out to me that the romance in SWATH reads a lot like the first volume in a Young Adult trilogy. Both of the guys have been introduced, but while they both seem to have sorted out their own feelings for the heroine by the end of the story, she's still barely aware that she's in the middle of a potential love triangle. The implication is that the Huntsman is the favoured suitor, but William is no less heroic or appealing, leaving options open for a possible sequel. And, you know, even though this film was far from the high-quality Game Of Thrones drama I was hoping for, I would watch a sequel. But not to find out whether Snow White is Team William or Team Huntsman, because I'm still firmly in Team Snow White.

Photo gallery of Colleen Atwood's costumes for Snow White & The Huntsman.
HuffPo: 'Snow White and the Huntsman' Is A New Twist On An Old Tale.
Early concept art for Ravenna.
Posted by Hello, Tailor at 14:27