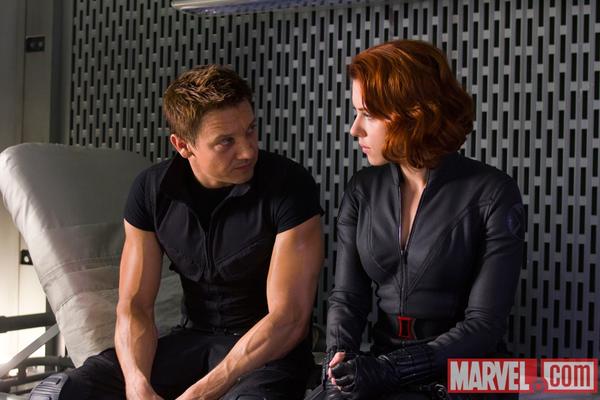 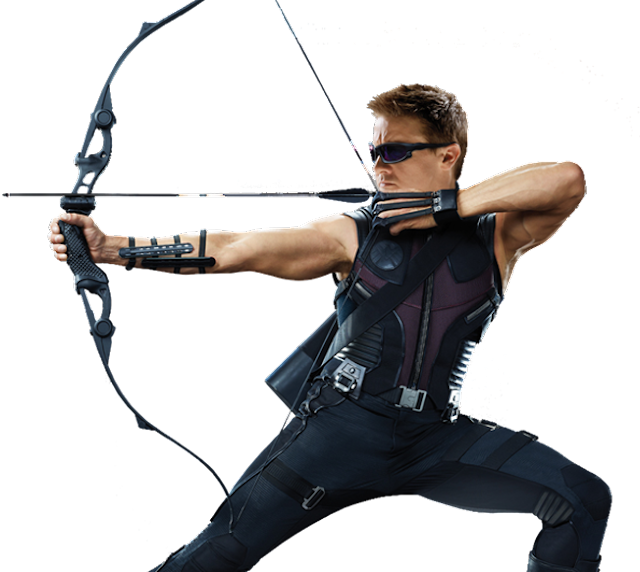 My first reactions to Hawkeye were: 1) Disappointment that we didn't get to see more character details/backstory (even though I understand that there just wasn't enough time to flesh out another hero), and 2) amusement because he was so clearly an awesome character for kids. Obviously every superhero has its own specific fanbase of devoted 7-year-olds, but once Hawkeye got free from Loki he spent the whole time doing things that were just hilariously flashy and super-slick, like shooting an exploding arrow at aliens behind his own head, and jumping off buildings. Do you know what's really fun and easy to pose with? A bow-and-arrow that you just made out of a stick and a piece of string. Hawkeye was totally the kids' superhero.
Hawkeye's costume was the biggest departure from the comics. Goodbye, purple tunic. Goodbye, purple tights. Goodbye, purple domino mask. Goodbye, purple. Instead we get a presumably-kevlar vest and tight black trousers made from the same wetsuit material as the rest of the SHIELD-manufactured suits, meaning that Jeremy Renner gets to display both The Butt and The Gun Show in any and all press photos. You know there's a whole thing on Tumblr where people just tag pictures of the cast of The Avengers with "BUTTS" or Assvengers? Yeah, that's a thing. I can't imagine why.

The reasoning behind Hawkeye's bare arms is probably something to do with increased range of movement, but I kind of have my doubts about that one. For one thing, exposed biceps are not remotely necessary for shooting a bow and arrow, and for another, the shoulders of his costume honestly look like they might dig into his shoulder joint whenever he raised his arms above his head. It's possible that those shoulder-guards retract, but on the whole I think the shoulders of his costume look far too rigid. 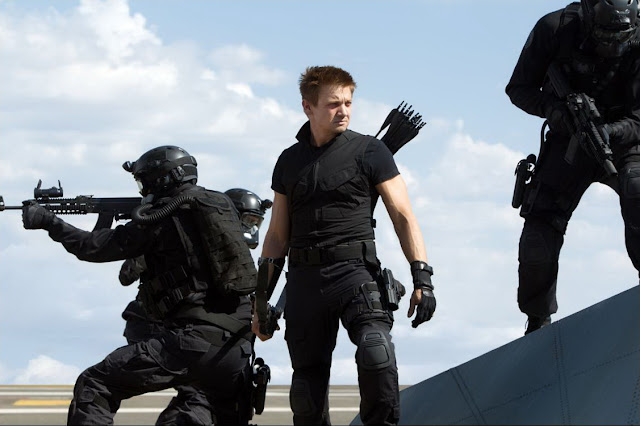 Otherwise, Hawkeye's costumes are the most functional, and are founded in quasi-military designs. Instead of a blue SHIELD jumpsuit, he wears a black t-shirt and semi-armoured black vest and combat trousers. Because he's a focal character his face (and arms, because The Gun Show is in Jeremy Renner's contract) is bare, which makes him look weirdly exposed when compared to his fully riot-geared compatriots in Loki's Army and the SHIELD security teams, but serves the purpose of letting us know which one he is during fight scenes. The fact that his clothes are largely quite generic and designed to fade into the background works out just fine considering the fact that he's kind of the everyman of the Avengers, and his preferred role is to be hidden away from the centre of battle. 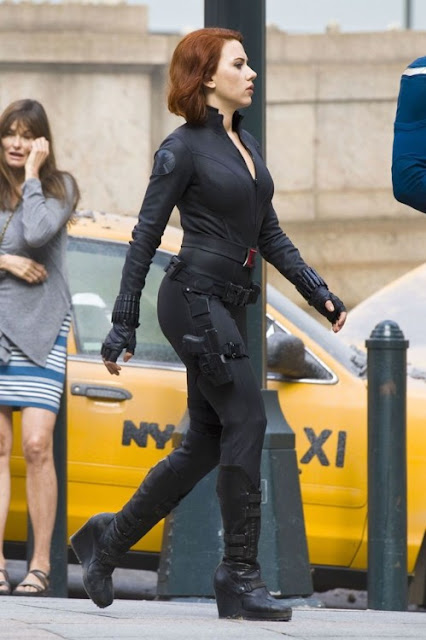 Since it seems to be the first thing many reviewers concentrated on with regards to Black Widow's role (hurr hurr, Scarlett Johannsson wearing tight clothes, hurrrr), I'll begin by talking about the catsuit. I've already written a bit about eyecandy in The Avengers in my Captain America post, and while I would say that Black Widow's costume isn't quite as practical as some of the other Avengers', it's not played for sex appeal any more than Captain America's is. Hawkeye's costume bares way more skin, and although I'd prefer it if Widow's outfit included some more obvious body-armour sections, it's no tighter or more form-fitting than any of the others. I'm not wild about the fact that she's wearing high heels, but since they're wedges and never really appear onscreen, there's a possibility they may just be there to boost her up a few inches among her much-taller co-stars. Chris Hemsworth is an entire foot taller than her, plus Thor boots. As for her casual clothes (on the Helicarrier and in the final scene in Central Park), they amount to jeans and leather jackets, and are practical rather than being the kind of drool-enducing sexxxy token female outfits some reviewers appear to have imagined. 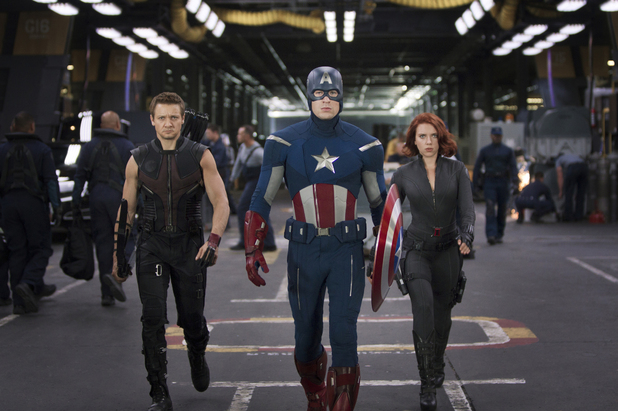 This article about reviewer reactions to Black Widow's role in The Avengers is both fascinating and depressing. Thanks to the fact that I didn't read any mainstream reviews until after I'd already discussed the movie with lots of other fans, it was a while before I was even aware that there was so much negative feeling about Scarlett Johansson, both in general and in the context of Black Widow. People were saying that she was just there to look hot. People were saying that she was a token female. People were saying that she only had two facial expressions. Were these people even watching the same movie as me? The one where Black Widow, the most cerebral of the Avengers, is the only one to outwit Loki and play him at his own game? The one where she leaps onto an alien aircraft and works out how to steer it by stabbing the pilot with her knives? The one where she saves the world? It feels almost too ridiculous to say this, but it seems to me like a certain segment of the population have somehow been so blinded by Scarlett Johansson's attractiveness that they think her only asset is the ability to look good in a catsuit. And you know what? That isn't even an asset she utilises in this movie. 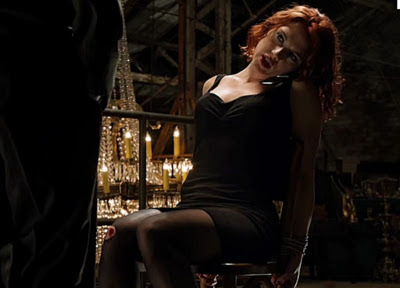 I watch a lot of things that fall under the action/comicbook/sci-fi umbrella, and there are already so many token female/badass seductress characters out there that I can almost see how someone who wasn't paying any attention might mistake Black Widow for one of them. But the reality is that there's no point during The Avengers when her looks are even commented on, and nor does she get any tiresome "feminine wiles" scenes. Most complaints or creepy sexist commentary on Black Widow's costume/body/character say far more about the commenter than about Johansson's performance itself. It's almost like people don't want to believe she's awesome. I've heard lots of people debate the relative hotness of the various male characters, but never to the detriment of those characters, whereas practically every mention of Widow's/Johansson's legendary sex-appeal is accompanied by some kind of snide implication that it's the main reason for her presence in the movie. If you want to be really annoyed, take a gander at this moment in the Avengers press tour (around 3 minutes in), which says a lot about the kind of questions actresses habitually have to answer when promoting their films. While Robert Downey Jr gets a complex question about characterisation, Johansson gets asked what she ate in preparation for her role. Black Widow isn't just a body. Scarlett Johansson isn't just a body. 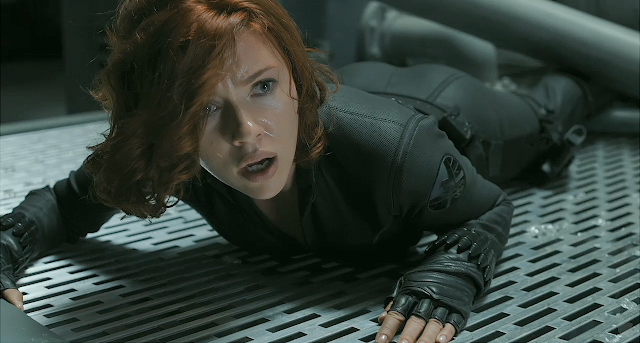 I've even seen people complaining about Black Widow being afraid of the Hulk. Hey, guys, remember Lord of the Rings? That enormously successful movie franchise where the main characters spent the majority of the story being scared shitless, and as a result you somehow ended up believing that a giant glowing eye was a formidable and terrifying force of evil? Right. Wide-eyed terror is a perfectly reasonable response to the possibility of being stomped by a three-ton rage monster who is literally incapable of listening to reason. The more demonstrably fearsome something is, the more impressive it is when our heroes overcome that fear and tackle it head-on. One of the reasons why the Hulk was so effective in this movie was because everyone had a healthy respect for how dangerous he was, and Black Widow's reactions were a major part of selling that point to the audience.
And so, I end this not-unexpected feminist rant post with a photo that summarises the two things that fans have deemed most important about The Avengers: friendship, and butts.