Costume design is the point where my positive and negative feelings about Prometheus intersect. The visuals of this movie were amazing, but at the same time I'm of the opinion that almost every reference that directly connected Prometheus to Alien was handled very poorly. I've already written about how the decision to make Prometheus into a glossy sci-fi epic and attempt to overtly tie it to Alien was a mistake, and costume design was definitely one of the details that should have been used to distance Prometheus from Alien, not bring the two together.
This interview with costume designer Janty Yates touches upon the fact that while the spacesuits in Prometheus were designed to look very different from those in Alien, the indoor/casual clothes were intentionally similar to the costumes worn by the crew of the Nostromo. Which, to me, immediately seems like a bad idea. The waking-up/breakfast scene in Prometheus is already similar enough to the one in Alien that it's a comfortably direct reference, but aside from the basic scene-setting they should have avoided any other similarities because the premise and setting of the two movies are so fundamentally different. Although the two films share the same discovery-thriller structure and pacing, the crews are different people with very different aims in mind. The Nostromo was a beat-up old mining ship, crewed by experienced blue-collar workers who treated each other with friendly, professional wariness; the Prometheus is a brand new, hugely expensive exploration vessel, crewed by academics, businesspeople, and some expert pilots and security staff. The idea of these two casts of characters looking similar makes no sense at all.

Alien has some of my favourite character-based costume design ever. If you want a bit more detail my review is here, but the short version is that most of the clothes we seen on the crew of the Nostromo are well-worn uniforms, with a couple of personal items thrown in. For a group of people who work for a strongly branded corporation -- and may only be allowed a limited quantity of personal items onboard -- this makes perfect sense, especially when you see how dirty some parts of the Nostromo are. Basically, they are dressing for work on the space equivalent of a long-distance freighter ship. The Prometheus, however, is a completely different kettle of fish. Firstly, the ship itself was built specifically for this mission, and is state-of-the-art. For several of the people onboard this is probably the first time they've travelled to another planet, and in the case of Shaw and Holloway at least, they are passionate. Unlike the characters in Alien or Aliens, they aren't just showing up for another day at work in an uninspiring job they don't particularly enjoy. The fact that everyone seems to be wearing Weyland Industries uniforms kind of makes sense because that's who funded the mission in the first place, but also they're really not very... uniform? This isn't something I have a major problem with, but I do feel like it's been consciously included in order to emulate the aesthetic of Alien in a way that doesn't really make a lot of sense.
Much of my confusion about the costuming decisions stems from my confusion about the characters themselves. One of the biggest failings of this movie was its inability to explain why the characters acted the way they did. Which, you know, is kind of an important aspect of storytelling. Alien was simple: the crew of a mining vessel happen upon what appear to be the ruins of an alien structure and accidentally bring an alien onboard their own ship, causing chaos and disaster. Prometheus, though, is a far trickier story to tell, mostly because Ridley Scott made it difficult for himself. The background of the mission to LV-223 was baffling from the start because even once we'd found out Weyland's "true" reasons for wanting to find the Engineers, we still had no explanation as to why half of the people onboard had agreed to come along in the first place. In the introductory scene where Shaw and Holloway explain their hokey search for Bald Xenu Jesus to the rest of the crew, we learn that several of the crewmembers literally do not know why they are there.
As an expository device, that scene was incredibly clumsy. In a more general sense it was even worse because it immediately made me start wondering about a) who the hell signs up for a two-year research mission on another planet without knowing what they'll be working on or why, and b) who picked out the crew in the first place. Because the two people in charge are Vickers and Weyland, and since they're both meant to be entitled, self-absorbed control-freaks, crossing the galaxy in a spaceship full of volatile and/or incompetent strangers seems like a really out-of-character life choice. This Prometheus Pre-Prequel youtube sketch is spot-on with regards to the terrible survival skills of these people. A certain amount of panicked stupidity can be excused in sci-fi and horror movies, but not this much -- especially when you're trying to inject a little gravitas into your sci-fi epic. I mean, either you can tell a story about people struggling with faith and searching for the origins of the human race, or you can make a cheesy horror movie where people get their heads blown up for doing stupid things like taking their helmets off on an alien planet and touching creepy-ass slime worms. You can't have both.
There are a lot of clumsy plotholes in Prometheus that I can ignore or explain away, but I just can't find a way to legitimise why Vickers and/or Weyland would actively allow everyone to go into such a dangerous situation completely unprepared. Considering the fact that they're all alone in a spaceship millions of miles away from anything safe or familiar, this shows a distinct lack of the self-preservation instincts that supposedly make up the backbone of Vickers' and Weyland's personalities. 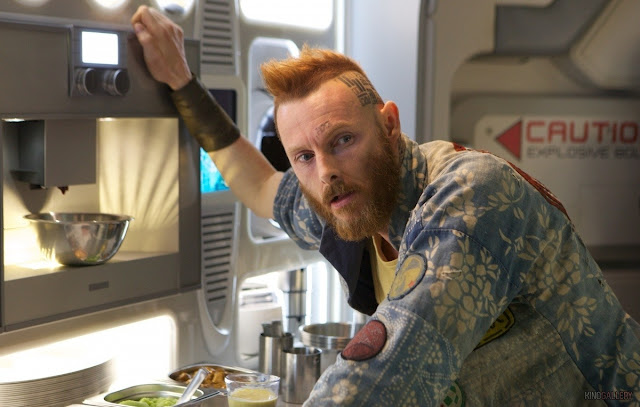 Fifield the geologist is the only crewmember chose characterisation really benefited from his costuming and character design. Although other characters all had little personalised costume details like Holloway's neckerchief (realistically douchey because he's a world-travelling archaelogist), Fifield had the most distinctive style, and for good reason. Aside from Shaw, none of the characters get any explicit backstory. This isn't a criticism per se -- Alien did just fine without providing any backstory for anyone -- but Fifield's actions and appearance made him seem like he might be the kind of person who would be reckless enough to sign up for a lengthy space mission to an unknown destination. It's implied that Fifield has had more field experience than the other academics, specifically in terraforming (Weyland Industries' main focus). His smock is covered in patches, indicating that he's travelled with several other ships, and his personal style is way more individualistic than anyone else's. With his mohawk and tattoos, there's clearly no way that he's going to fit in with the uniform guidelines -- if, indeed, there even are any. The fact that no one seems bothered that he's ditched the uniform entirely just makes everyone else look stranger to me, because if no one's enforcing the uniform rules then why does everyone else appear to be following them? 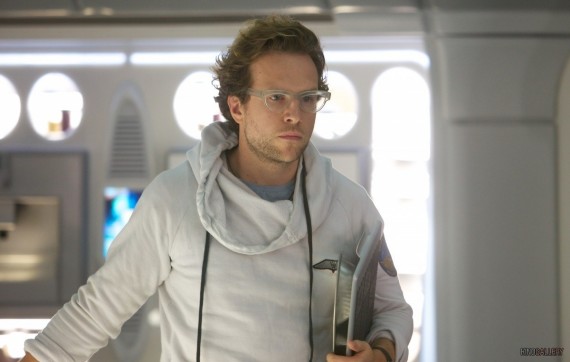 If the costumes in Prometheus hadn't been so closely related to Alien, I probably would've been way less critical. The visuals are one of the main strengths of this movie, and it's not like I think Janty Yates did a bad job. I think the crew look great, in fact, particularly the spacesuits (which were apparently an absolute bitch to construct and maintain) and Millburn's white tube hoodie, for which I have an inordinate fondness. Ridley Scott is the real source of my irritation here because although he didn't actually write the movie, he's the person who made all the major decisions. He hasn't reached anywhere near George Lucas levels of franchise-ruination, but some of the quotes I've heard from him regarding this movie's mythological background have been rather ominous. As in, his original vision included wayyy more Space Jesus. After 30 years it's  understandable that he'd want to tell a different kind of story than he did when he was just starting out as a director, but rather than providing a complementary addition to the Alien franchise, Prometheus only seemed to ovecomplicate things. Instead of trying to tie the crew of the Prometheus to the crew of the Nostromo he should have done the exact opposite and made them look as different as possible.

Coming soon: David8! Until then, you should totally read that Clothes On Film interview with Janty Yates, particularly if you're interested in the intricacies of how they worked out spacesuit logistics during filming.