I know most of you guys are here for the superheroes, but I gotta be what I gotta be, and sometimes that means posting about mediocre high-end fashion. Right now we're in the middle of Resort/Cruise season which, as you may have noticed from the name, is an imaginary season. In the world of Game Of Thrones, seasons take years to change, meaning that the characters get years to practise the best way to portentiously say "Winter. Is. Coming." In Fashion Land, Resort/Cruise season is the time between Spring and Summer when you swan around various luxury locations while wearing £3000 sunglasses and doing things that are way, way classier than watching Game Of Thrones. The purpose of Resort/Cruise season is to sell designer clothes to these rich people so they have something new to wear on their yacht. This year's Chanel show was pretty good, but by and large the attitude of most major fashion houses to Resort/Cruise season seems to be: "Someone's gonna buy this shit, so let's just print out some bikinis and knee-length skirts and go to the bar, YOLO."
One of the A+ things about Resort season is the hilariously lacklustre photoshoots. Even during Couture season some designers choose to exhibit using photoshoots instead of live shows, but usually that's either for aesthetic reasons or because they can't afford decent placement at Fashion Week. During Resort season, however, pretty much everyone whose name isn't Lagerfeld exhibits solely via lookbooks. And those lookbooks, as you may be able to tell from the above photo, can be kind of... dodgy. For one thing, the monochrome photo of palm trees looks like something you'd see hanging up in a coffee shop, and it's held up by bullclips. Secondly, the lighting is edging dangerously close to "we shot this in my garage".

Burberry Prorsum
Believe it or not, the idea of a blank backdrop used to be a weird concept (you can read a bit more about that and post-war fashion photographer Irving Penn here). Sometimes it can make the models look washed out and dull, but for brands like Burberry it's fine because the clothes are mostly in neutral tones. 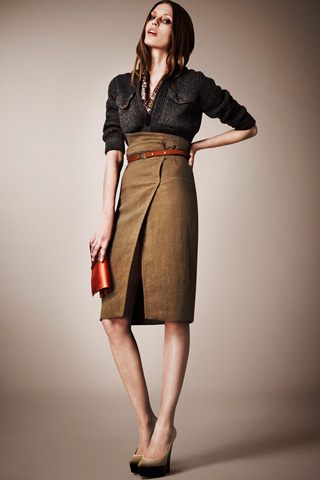 So, yeah, did I give you enough warning yet that there's going to be a bunch of super-bland shit in this post? Because: BEHOLD. 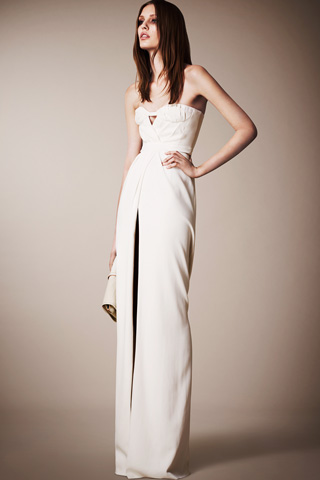 This gown baffles me because a) there is literally no one in the world who has the correct body shape and boob-volume to correctly fit into this and make it look good, and b) Burberry is a really commercial brand so I really... don't know what they were thinking...?? Resort season mysteries.

Just Cavalli
It's the colour of a really gross-tasting soda drink, it's partially leopard-print, and it comes with a matching lime-green Justin Bieber hat. Teenagers of America, it's your duty to wear this outfit to prom! 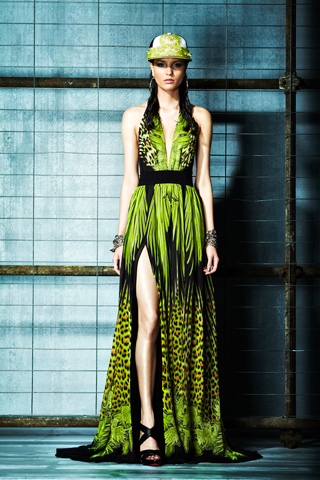 Zero + Maria Cornejo
Despite the ~highly imaginative~ usage of backing boards, I give this outfit a grudging B+ because it doesn't look like a half-hearted Resort season attempt at summer fun, and it hits all the things about the irritating "1920s trend" that most mainstream designers miss. Instead of being a period-drama pastiche or Baz Luhrmann ripoff, it takes the drop-waist/long-beaded-necklace details and puts them together in an outfit that looks modern and interesting without being outrageous. 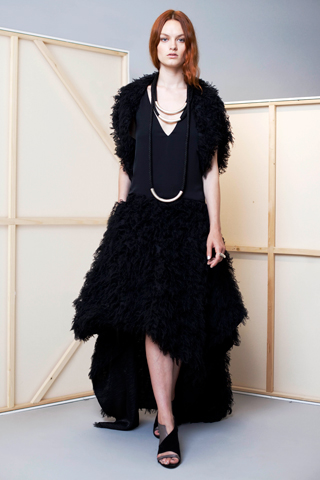 Calvin Klein
This suit may look dull to the untrained eye, but by Calvin Klein standards it's a Lady Gaga stage costume. Calvin Klein hates colours and patterns and loves to design hundreds and hundreds of outfits that essentially amount to beige bedsheets. Unfortunately CK streams a lot of their catwalk shows online, meaning that I've probably wasted/spent at least half an hour of my life heckling at my laptop screen as 37 blank-faced nymphs stride along a pale grey runway in near-identical pale grey smocks. So you can probably understand why this outfit made me fall off my horse. 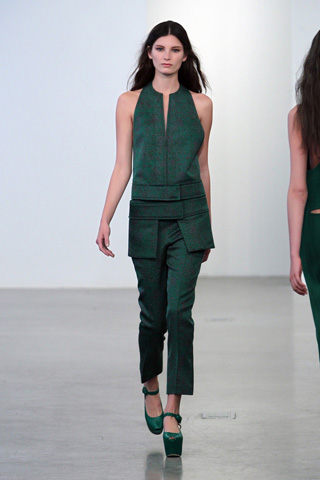 That being said, there was still a whole bunch of CK outfits that looked like black or white curtains and would only ever look good on Gwyneth Paltrow. But this! Is progress!

DKNY
"LOL" -- direct quote from DKNY head designers after they "finished" "work" on this. 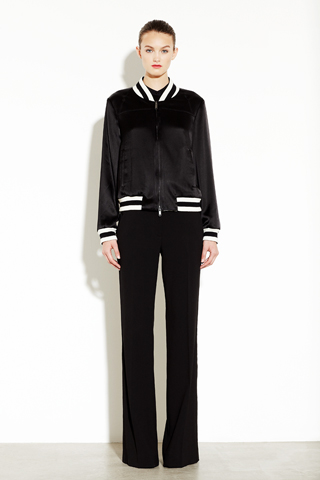 Lanvin
I love this bathing suit because it just looks so ferociously uncomfortable. Nothing says "relaxing beachwear" like an angry-looking model wearing a bathing costume that looks like it may well be 100% rigid (and attempting to cut off all circulation to her vag), armed with 5-inch perspex heels and a leather shoulderbag. 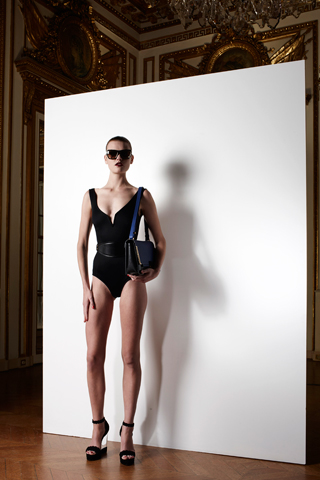 I feel like I've dissed Lanvin kind of unfairly here because these three photos aren't indicative of the whole show (which was rather stylish, if not particularly remarkable to me personally), but this microwavable tinfoil suit is just the shiznit. I hope someone wears this with the black bathing costume on underneath and uses it to go to the beach on Mars. 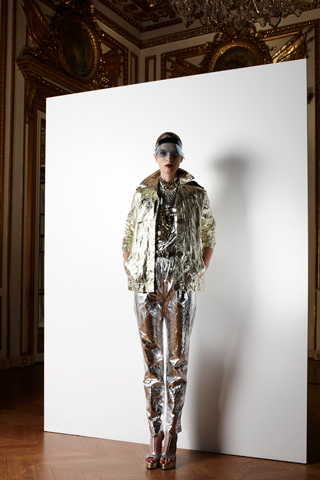 Organic by John Patrick.
"My junk feels great in this outfit," thought the John Patrick model, too distracted to button his fucking jacket properly. 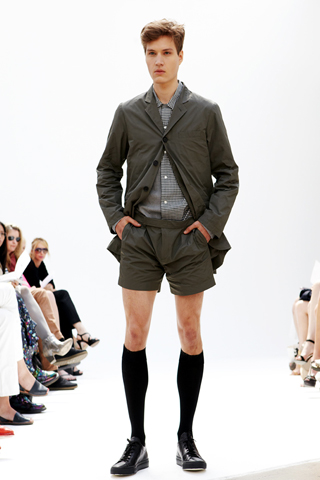 Diesel Black Gold
I like this for realsies because it's so Blade Runner. 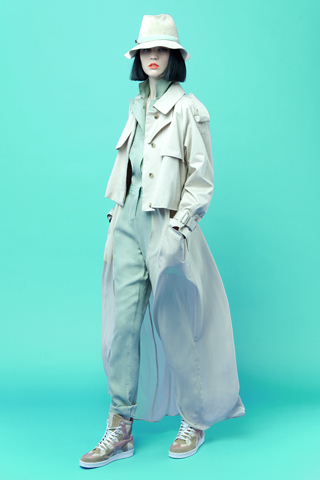 VPL
This model's name is Hannelore Knut. So: perfect model choice, really, for a lookbook that is so uncharacteristically focused around power rather than passivity.  There's always an unfortunate quantity of crappy, sports-themed fashion during an Olympics year, but this is sports-themed fashion done well. It doesn't look like workout gear but it does look strong and practical and simple, and has a few hints of "sporty" colours without going all-out Adidas. 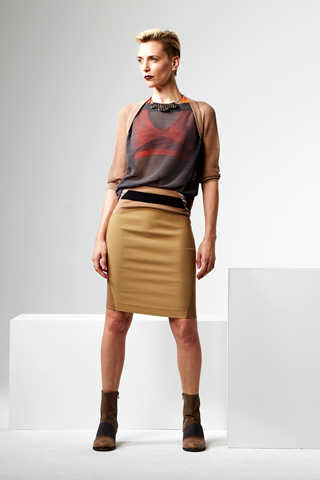 Hannelore Knut can totally work it, am I right? Some models couldn't carry off low-heeled boots and dresses made from wetsuit material, but this whole photoshoot was like a gallery of badassery. 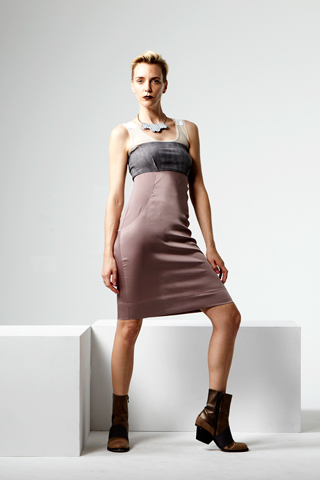 Marc Jacobs
This is an unexpected departure for Marc Jacobs, who is usually far closer to the the chic, vampy end of the Ladylike scale than the floral, Frida Kahlo/Miuccia Prada end. That being said, the sheer exuberant colours of this collection sucked me in, and I found myself really enjoying how summery and weird-looking it managed to be without ending up in Zooey Deschanel hipster quirk territory. 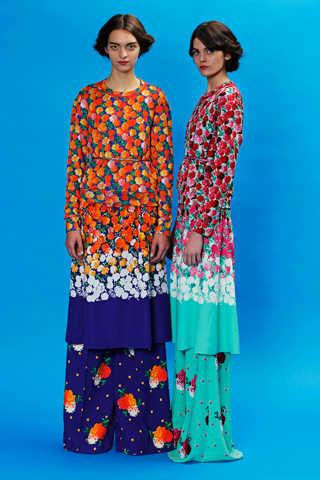 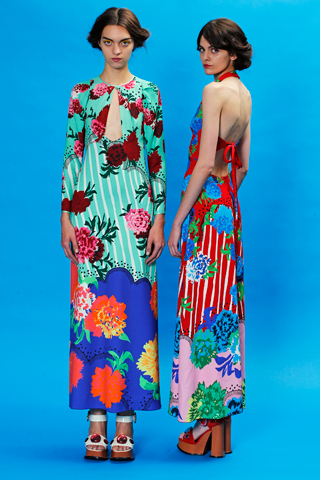 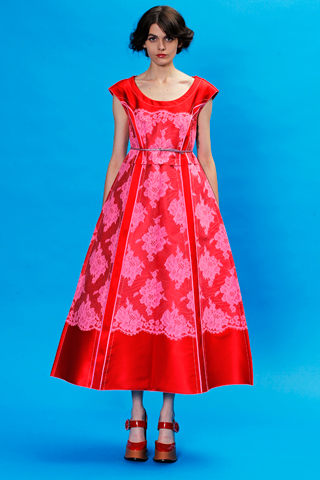