Before I start in on the costume reviews, I have a postscript to add to my earlier criticism of this film. Thanks to many of the reasons I mentioned in that post, fans of the original Alien movies have reacted harshly to Prometheus, leading to things like this video by Red Letter Media going viral in a textbook example of fandom's desire to pick everything apart. This isn't going to be one of those times when someone's all, "Stop overthinking everything and ruining everyone's fun!" because that would be blatant hypocrisy ony my part, but I do have one caveat with regards to this kind of list-all-the-faults criticism: It works for literally any movie. 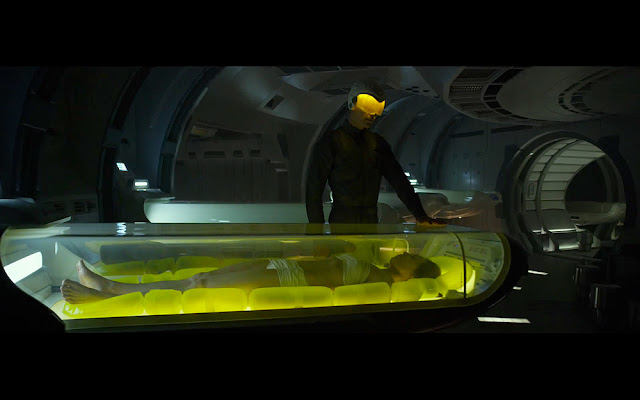 The things about fandom is that we're obsessive, and when something we love jumps the shark, that obsession often turns to the dark side. I understand it, this desire to dissect and rebuild; it's why fanfiction exists. (And fantasy football*, which is pretty much just fanfiction for people who like to delude themselves that they aren't geeks.) Not to mention the zillions of words of blog posts and magazine articles and, at this point, probably books fans have written to try and explain how and why the Star Wars prequels came to be so terrible. I'm often surprised by how non-fannish people can "like" a TV show or movie but only think about it for the couple of hours they're actually watching it -- I mean, why wouldn't you want to Wikipedia all the actors in Stargate: Atlantis and/or write agonisingly detailed reviews of all the costumes in the Avengers franchise? But of course, that dark side I mentioned earlier (ie, the side that leads some people to think that fans are "crazy") means that once you focus the laserbeam of your nerd energy on something you hate, it's super easy to let that can of worms explode in your face, and from then on it's a slippery slope down to Youtube-comment flamewars.

Your mileage may vary as to whether Prometheus was the Worst Thing Ever or just kinda fun-but-mediocre, but wherever you fall on that scale, the "List allllll the plotholes!" method of non-analysis is not going to help. Setting aside the childishness of feeling clever because you proven that something else is stupid, do you know what else was full of plotholes? Every movie you ever loved. I'm not going to get all Leave Britney Alone re: Prometheus, but if Inception taught us anything it's that a film can be riddled with internal inconsistencies and still be critically acclaimed and rated as one of the smartest mainstream blockbusters of the decade.
Science fiction thrives on nonsense. The Star Trek reboot movie is a glowing example of fast-paced action comedy and managed the seemingly impossible task of retaining (and satisfying) the most intense and persnickety fanbase in the history of ever, and yet the entire plot hinges on Kirk and Spock Prime coincidentally ending up in the same cave. Of, like, an ice planet where Kirk has literally been dropped at random. Oh, and time travel, a fictional conceit that has a 0% success rate when it comes to logical consistency. The guys at Red Letter Media could make an equally damning plothole list for Star Trek, Blade Runner, and every episode of Doctor Who ever made, because successful storytelling isn't a matter of rooting out and destroying every plothole and inconsistency, it's about making the audience believe.
The problem with Prometheus isn't that the story makes no sense (remember Inception?), it's that Ridley Scott failed to make us suspend our disbelief. And while the laundry list of unexplained dead-ends and scientific bloopers is far, far longer than it should've been, I still think that they could've pulled it off if the execution hadn't been so damn clunky. Ridley Scott made Blade Runner and Alien over thirty years ago, but I'm getting the impression that he still doesn't understand science fiction audiences. It's not enough to make a film look like it's in space, or to do really detailed research on terraforming. For all that books like The Science Of Superman sell like hotcakes, most of us are willing to swallow any old non-scientific ridiculousness, provided it's propped up with a story that flows well and has a solid base of emotional truth. Unfortunately, Prometheus didn't manage either of those things, and that left it open to this death by a thousand cuts of fan-criticism. 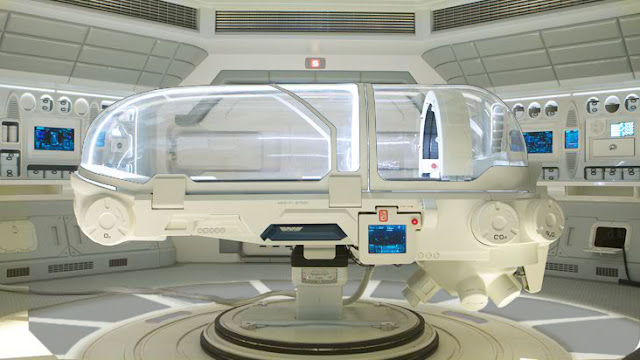 Oh, and just as an indicator of what works and what doesn't when it comes to suspension of disbelief, here's a short list of some of the objectively silly things in Prometheus that I was able to accept at face value. You know, unlike the whole, "OMG, Human DNA is the same as Engineer DNA!! We're all descended from Bald Xenu Jesus! ...Wait, what about the dinosaurs?" thing.
I'm sure people will disagree with some of these items, but my point is that when you pay to see a mainstream sci-fi movie then you're basically tearing up your Realism Club membership card. There will always be something that doesn't make sense, and the mark of a science fiction film's quality is how many of those things it can make you ignore.

* I had to google "fantasy football" just to make sure it was what I thought it was. Yes, I am my own nerd-joke punchline.
** Do lemmings travel in flocks? Or herds?? Answers on a postcard.