Ordinarily I'd be giving this episode a very positive review. It was full of the kind of Teen Wolf nonsense that usually warms the cockles of my heart: boner jokes, half-assed plans plans like "flood your apartment and electrify the water", Isaac wearing cute knitwear, werewolves jumping 10 feet in the air like Spring-Heeled Jack, Lydia being awesome. However, Boyd's character arc has been so poorly handled that it ended up overshadowing my enjoyment of the rest of the episode.

I heard a rumour recently that Isaac would be killed off in this episode, and my immediate reaction was "NO!!!" because a) Isaac has endured constant torment for two solid seasons now, and b) why kill him? It would be cold hard proof that Jeff Davis is indeed Voldemort. However, I wouldn't necessarily have been annoyed with it as a writing decision, because it would've been in keeping with Teen Wolf's overall tone as a show where bad things happen to good people, and everything is tragic and dismal all the time. However, killing off Boyd struck me as total bullshit. 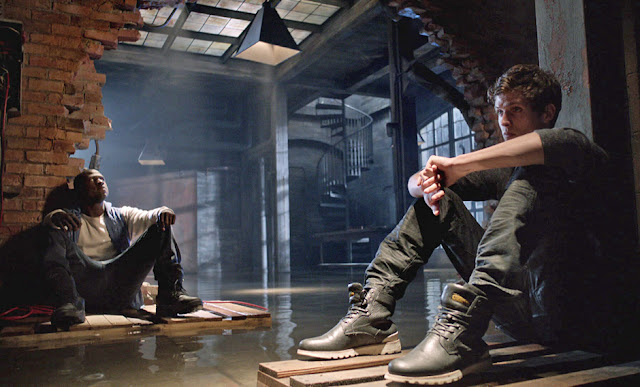 Since the introduction of the three new betas, Boyd has always been the one with the smallest amount of useful screentime. Until last week he had almost no backstory, and overall he's been given fewer lines and less agency than almost anyone else in the cast. This season he's had maybe three good moments, including this episode's electrocution plan and last week's revelation about his sister. And in the light of his death, this now makes it seem as if he was written to be a disposable character. Which surprises me, because Teen Wolf's M.O. is to torture its audience by torturing its characters, and it's kind of difficult for the audience to get attached to a character when he's rarely given anything to say.
Why did Boyd die? From an emotional standpoint, he's yet another addition to Derek's Manpain Roster of tragic deaths... but then again, Isaac would've been a far more effective choice if they wanted to torture Derek some more. It may have been necessary for Derek to "kill" one of the betas in order for the Alpha Pack plotline to progress, so Boyd's death presumably makes sense in the long run... but to me, it felt cheapened by his utter lack of character development. Even his method of death was poorly handled, as he apparently died from being forcibly impaled on Derek's fingernails?? This looked like a really difficult way to die, even if he was powerless from being electrocuted. I mean, fingers are bendy. How on earth could the twins have dropped 200lbs of Boyd onto Derek's hands and not had Derek's hands just... bend away, instead of going all the way through Boyd's ribcage and puncturing his lungs to the extent that he was dead within a minute? I realise this is a nitpick, but logistically speaking, Boyd's death was impossible. 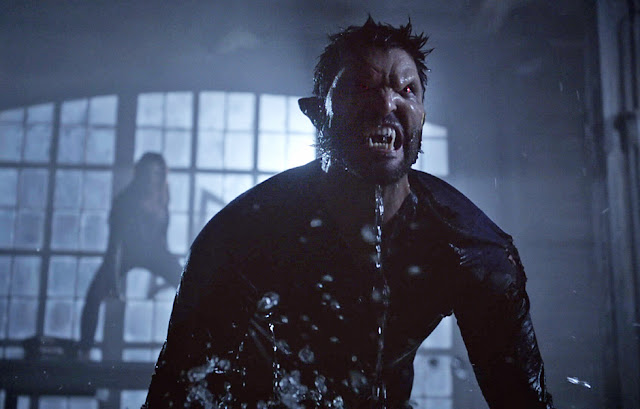 Who was Boyd? Do we even have a solid idea of his personality and life goals? Why on earth did he tell Derek that the bite was "worth it" when a couple of weeks ago, he was telling Stiles that he'd just lost his only friend? All of these issues are exacerbated by the fact that out of all the Teen Wolves in Teen Wolf, the two fatalities so far have been the sexy blonde girl and the black guy who never got much dialogue: two crappy old horror movie tropes that Teen Wolf should really be trying to subvert rather than copy. Of the three betas, the girl got to be sexy and then dead, the black guy got to be silent (and occasionally threatening) and then dead, and the white guy got a ton of screentime and a tragic backstory. Don't get me wrong, I love Isaac. But I feel like I never got the chance to love Boyd because he was always given so little to say or do. 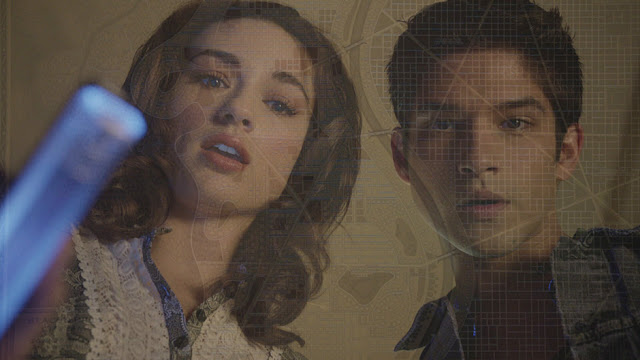 Out of the main cast this season (including tertiary characters such as family members and the Alpha Pack), nine characters are white men, and nine are women and/or people of colour. Among the new characters, everyone except Kali has received more character development and useful screentime than Boyd, who has been around longer than any of them. The Twins both got romantic subplots and multiple interactions with the main cast, Jennifer Blake is Derek's love-interest, and Deucalion is the primary villain of the series. Meanwhile, even after two seasons we know very little about Boyd, either in terms of his personality or basic details such as his sexuality or day-to-day life. During school scenes, Allison, Lydia, Stiles, Scott, Danny and the Twins are regularly in the same classes together, but Boyd is rarely there. Is he meant to be a year older than the rest of the cast...? I honestly do not know. And I know setting it out like this makes it sound like a coldly mathematical issue of ~demographics~ and screentime, but seriously. When you think about it, the whole Boyd situation does not look good. 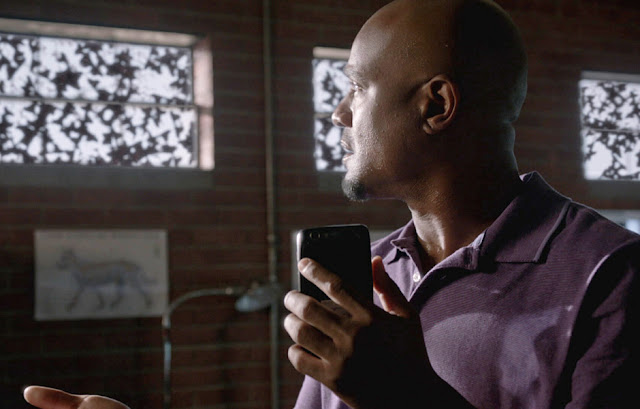 Anyhow, if there's anyone still reading this: time to talk about the rest of the episode. First of all, the opening scenes were 10000% NIGHTMARE for me, because I have a phobia of moths. Being trapped in a car full of attack-moths is pretty much my idea of hell. And didn't they say last week that someone from the FBI was gonna show up and start solving this whole serial-killer druid problem? You know, so as to avoid a whole bunch of people dying while the local Sheriff and a bunch of traumatised teenagers simultaneously fumble around, trying not to tell each other what's going on? The only "good" outcome of this is my continuing belief that Sheriff Stilinski thinks Stiles is the killer. Like, seriously. STILES HAS A SECRET. HE'S OUT ALL THE TIME, AND WON'T TELL ANYONE WHERE HE WAS. HE'S OBSESSED WITH THE MURDERS. HE'S ALWAYS AT EVERY CRIME SCENE. Sheriff Stilinski is having a nervous breakdown right now because he thinks his son is a psychotic druid murderer. This is just a gold hard fact (that I believe in my head with little to no evidence to support it). 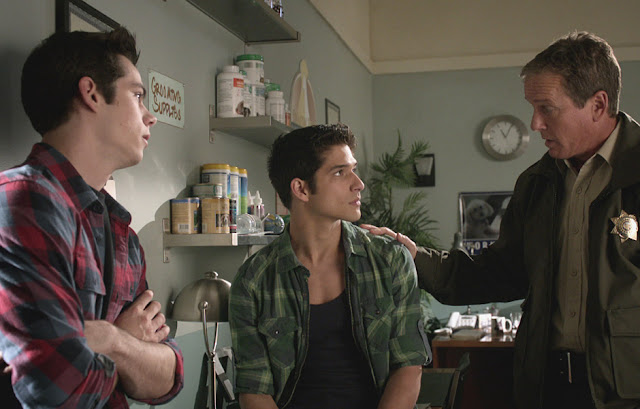 Derek's apartment is a real mystery in this episode. First of all, how does his submarine-style klaxon alert system work? And how did one of the Alpha Pack manage to draw that werewolf swastika on the window in the 2 seconds it took for Derek to look around and check the alarm? ALSO, how did they flood his apartment?? Is it completely watertight?? He's on like the eleventh floor of the building -- how does that even work without leaking onto the floor below?? I can only assume that he owns the entire building, because it's totally unlivable (GIANT HOLES IN THE WALLS!!) but has power, so he's probably not squatting in a derelict building. And no landlord would be OK with all the shit he pulls, like having constant murderfights with werewolves in the middle of the night, and flooding an entire floor. 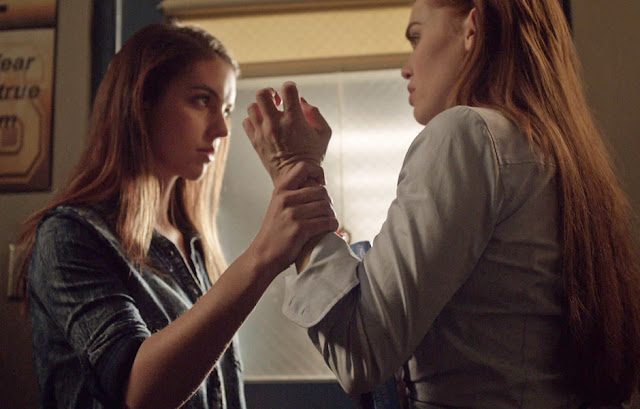 I think I've given up on Cora. Even if we eventually find out what she's been doing for the past 6 years, the complete absense of any Cora/Derek relationship scenes have ruined her character development in this show. As a viewer, I have no understanding of what she's feeling, or why she acts the way she does. I theorise that she and Derek care about each other but are too fucked up to express it, but honestly, I see no actual evidence of that onscreen. Cora comes across as a tough, angry character, but with no emotional depth or complexity. When she cried over Boyd's body I just felt confused, because we'd barely seen any development of a Boyd/Cora relationship, so it felt like she was just crying because someone had to cry. I suspect she's working with the Alpha Pack, but surely that'd give her more reason to get closer to Derek, not less. I'M BAFFLED. 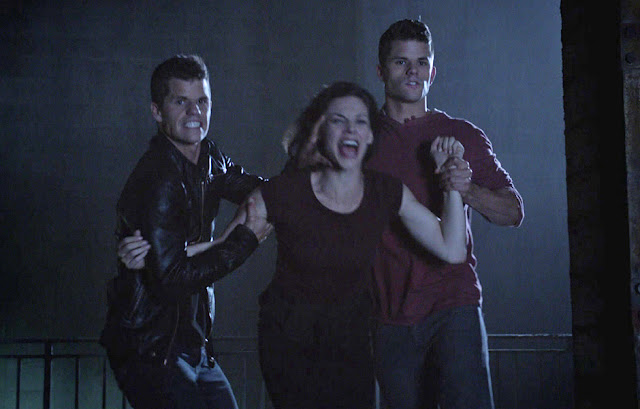 Finally: what, exactly, was the plan with regards to Ms Blake? The Twins are her students so they couldn't have let her live, because she'd obviously be able to identify them to the police. So Ethan and Aiden must have been 100% OK with the idea of kidnapping and then murdering their innocent, human teacher as part of a werewolf power-play. This doesn't exactly help the show's case as it attempts to ~humanise~ the twins as individual characters with functioning emotions and the potential to be redeemed.

Find me on Twitter @hello_tailor, and Tumblr at hellotailor.
Posted by Hello, Tailor at 07:29