The title refers to the frayed nature of the shirts worn by most of the main cast. Scott, Boyd, Derek and Ennis all suffered a severe clawing, while Ethan and Aiden avoided the issue by showing up to the fight shirtless and then twinsforming into the werewolf megazord again. In case you're still curious about what happens to their pants when they stick themselves together with magical morphing werewolf glue, Jeff Davis has given us an answer. Kind of. 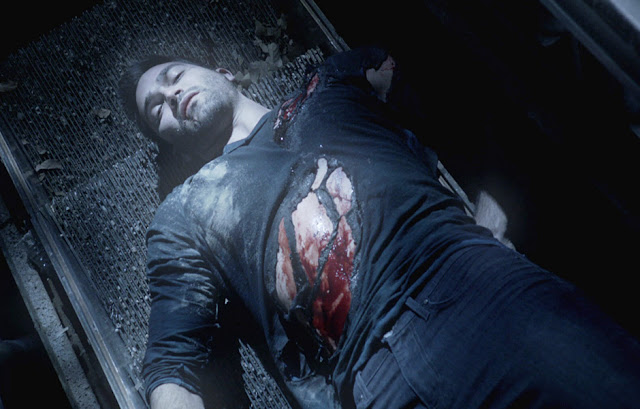 This episode featured what felt like decades of flashback footage of yet another werewolf showdown. As usual, everyone ran at each other while yelling -- a prime martial arts technique, if you are three years old. Happily, this scene catered to my neverending fascination with Beacon Hills' urban planning, because it took place in a heretofore unmentioned post-apocalyptic abandoned shopping mall. Which Scott and Isaac rode into on Scott's new motor scooter. (It's unclear whether this was at ground level or not, because Derek and Ennis fell at least three storeys down from there. WHATEVS.)

Sadly, most of those flashback scenes were kinda pointless, because we already knew what was going to happen. And @snazdoll pointed out on Twitter, all that slow-motion glowering gave us ample time to consider the bafflingly confused character continuity. 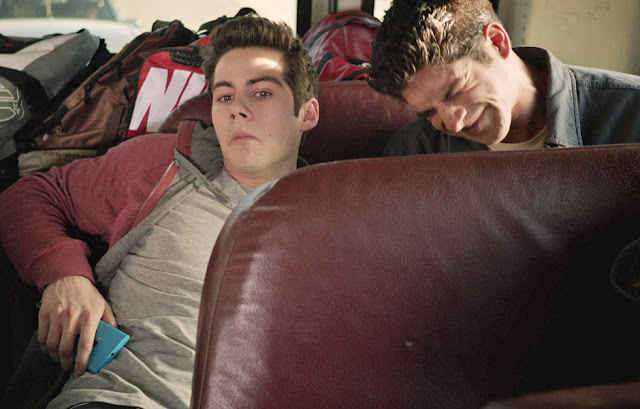 I wouldn't say this was a bad episode, as such. There were plenty of awesome moments, such as any time Stiles, Danny, Allison or Lydia were onscreen. However, the flashback-based plot structure didn't really work for me. "I can't believe Derek is really dead," said Scott, gazing dramatically into the camera in the first scene of the episode. I'm with you there, Scott. I can't believe he's dead, either. Because he really obviously isn't. Also, from a structural standpoint, this episode could've done with way more scenes in the school bus (bottle episode, anyone?) and less time spent flashing back to shots of the Twinsformers doing angry shirtless backflips in the dark. 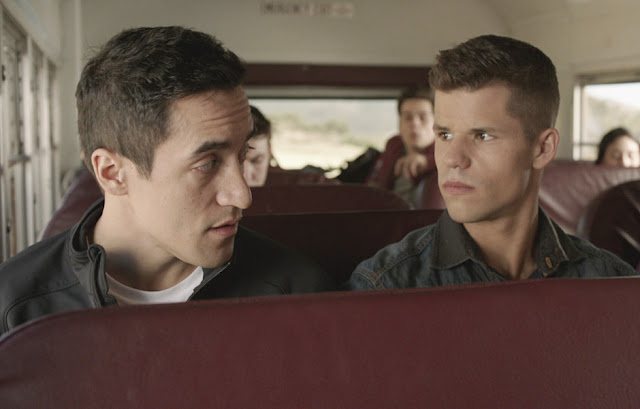 The school bus scenes were the best for two classically Teen Wolfian reasons. 1) Fantastic comedy acting from Stiles, Coach Finstock, and walk-on role winner Jared (GREENBERG??), and 2) hilarious unintentional comedy from everyone else. Like, how could anyone fail to notice Boyd's sudden werewolf manicure, glowing yellow eyes, and loud growling? Have we got to the point now where everyone in Beacon Hills (aside from Danny, apparently), is 100% aware of werewolves and is just trying to stay out of the way? "Oh god, they're going to have a werewolf showdown on the fucking school bus in broad daylight?! EVERYONE STAY CALM AND PRETEND NOT TO SEE ANYTHING WEIRD GOING ON." 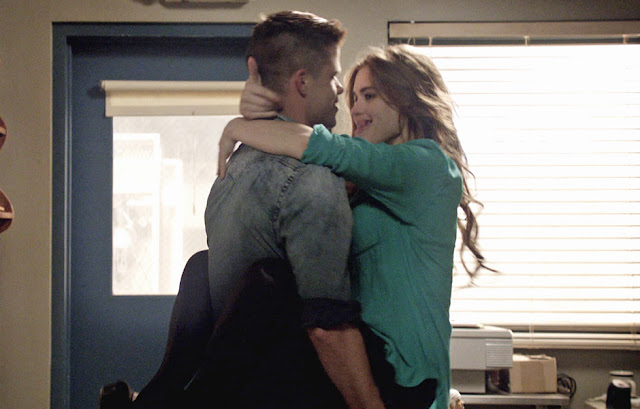 In bizarre character continuity news, what the hell was up with Lydia and Aiden?? Last week when Stiles told her that Aiden was a murderous alpha werewolf, Lydia seemed understandably appalled. She'd just dodged a serious bullet -- getting screwed over once again by an evil werewolf, because Scott, Allison etc all failed to tell her what was going on. Naturally, I assumed that she'd start avoiding Aiden at once. But this week she's making out with him, like there aren't a zillion other hot guys in Beacon Hills?? I'd understand this if the show seemed to be taking her in a seriously self-destructive route, but honestly that did not seem the case AT ALL until now. She just seemed like she was on the rebound, and was keen to avoid the traumatic horror of the Peter Hale situation last year. Why the hell would she purposefully add to the danger/weirdness in her life by hooking up with Aiden?? (Oh, and on a similar note... WHY HAS NO ONE WARNED DANNY THAT ETHAN IS A DANGEROUS WEREWOLF MURDERER?) 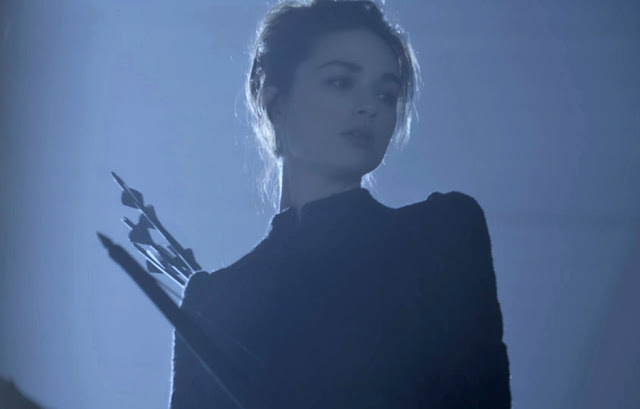 This week's dose of Scallison was maximum adorable. Specifically, Pacifist Superman Scott McCall made several adorable (if doomed) appearances, and Allison was a stone cold badass. Even better, her amateur surgery scene was a genuinely excellent example of why Crystal Reed need wayyyy more screentime in this show. Ghost Victoria Argent ("This must be done CLINICALLY AND UNEMOTIONALLY," she hisses unhelpfully as Allison cries over the body of her dying ex-boyfriend) was scary as fuq, and I greatly hope that she shows up more in the future, like Fraser's ghost dad in Due South or Cylon #6 in Battlestar Galactica. 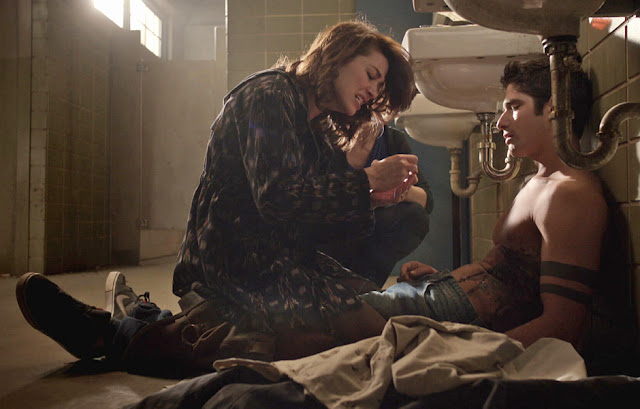 (N.B. It's probably best if we forget the fact that this scene takes place in a rest-stop bathroom. And that for some reason no one comes in to either use that bathroom, or to find out why two teen girls and two teen boys all ran in there as soon as the school bus stopped. I was half expecting Coach Finstock to walk in while Allison was helping Scott put his shirt on, and to be all ~scandalised. Is this further evidence that everyone in Beacon Hills knows what's going on, and are just avoiding the werewolf shit at all costs? "DON'T USE THE MEN'S BATHROOM HERE, Scott McCall just went in and it looked like he was bleeding from a chest wound. Again.") 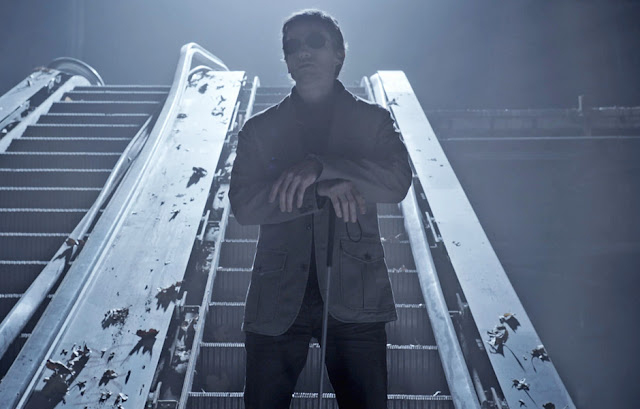 Finally, this episode confirmed a theory I've held close to my heart for a long time: that Derek Hale is terrified of stairs. After two seasons of avoiding stairs at all costs (how many times has he leapt over the entire staircase at the Hale House, anyway?), he's been defeated by a static escalator -- ie, stairs. Stairs are his Achilles heel. A detail that is fittingly mirrored by his mortal enemy Deucalion, who in the space of five episodes has now had two separate scenes where he menaces someone in an elevator. Elevators are his strength. Stairs are Derek's weakness. You do the math. (I'm a genius.)