If there was an award for "most arbitrary reason for a shirtless scene", Teen Wolf would be a shoo-in. This was a genuinely good episode, but I couldn't help but LOL at all the ab-cameos. While there were a couple of relatively legitimate shirt-removals (ie, for sex), some were... less so. Like for example, when Boyd tried to drown himself in the bathtub, but stripped his shirt off first. (But not his pants.) Even in the flashback to Uncle Moustache's 1970s suicide, we got an ab shot. WELL DONE, TEEN WOLF. Well done. 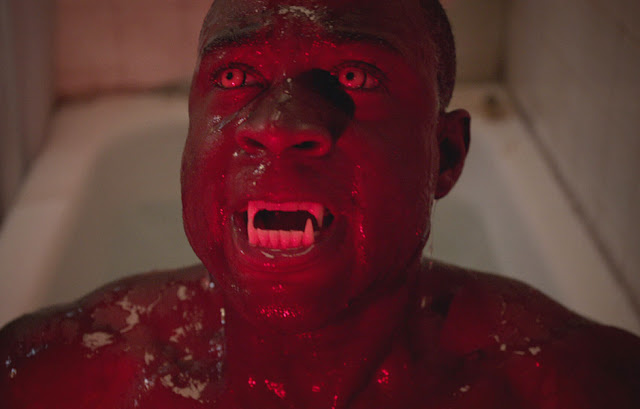 Anyhow, this was a really great episode of Supernatural. Luv cursed motels. Luv cameo appearances from Stephen King's creepy old aunt. Luv totally arbritrary reasons for every character in a TV show to be in a new location. "Athletics meet"?? Since when is Lydia an athlete? Is everyone an athlete? Why do they have to take an overnight trip, and why does Chris Argent barely seem to know where his daughter is, and why? Oh, it doesn't matter. For Reasons, everyone had to stay overnight at the Scooby Doo Haunted Motel, chaperoned by the world's worst authority figure, Coach Finstock. "No sex, kids! But if I hear screaming during the night, I won't notice or do anything about it, because that would interfere with the plot!" Repeat after me: Just Go With it. 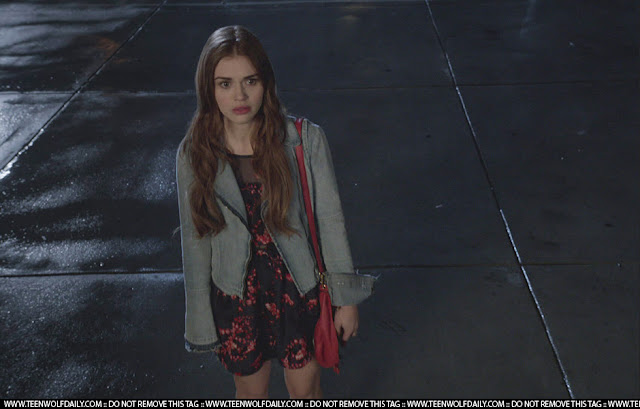 Have you ever noticed that whenever the camera pans over the full moon in Teen Wolf, Drama Noises appear? I like to imagine that in Beacon Hills, that happens in real life. People look at the moon, and then the soundtrack from Psycho swells in the background, to add Important Drama. But I digress from the more important topics at hand: ie, that MTV is breaking new ground by showing a male/male nipple kissing scene on teen television. Emmys all round for Danny and Ethan, who at 37 and 26 respectively, are still high school juniors. (NEVER FORGET.)
My favourite aspect of this episode was how goddamn sensible everyone is -- while remaining within the bounds of traditional horror movie idiocy, of course. Like, obviously they're not going to leave the haunted motel. That would be too easy.

I particularly enjoyed Stiles' list of Suspicious Characters, headed up by Mr Harris. "IT'S SNAPE AGAIN," shouted Ron (Stiles), as Harry (Scott) rolled his eyes in the background. "SNAPE IS DEFINITELY TO BLAME." Plus, of course, there's the agonizing pragmatism of Stiles suggesting that hey, maybe Lydia's at it again. Unlike Allison and Scott, who tend to be far more biased (both positively and negatively) about people they know, Stiles is ruthless. Yes, he has a crush on Lydia, but also she might be killing a bunch of people. Somehow, Stiles manages to combine this level of assholic cynicism with the ability to look like a) a muppet, and b) a sad-eyed cartoon baby deer. BRB, mailing Dylan O'Brien his third EGOT of the season. 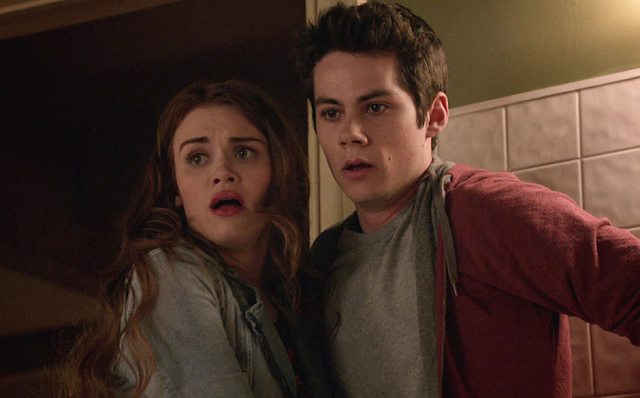 Aside from the fact that people really need to start listening to Lydia, Team Human did pretty well this week. Like, they did kind of listen to Lydia, you know? Admittedly they didn't actually avoid the mortal peril, but Allison did at least support Lydia when she started hearing imaginary murder noises in the room next door. Specifically, instead of saying something like, "Maybe we should just stay indoors," or "I didn't hear anything," Allison says, "Maybe we should find out." Which is, incidentally, the ideal way to help small children who think there's a monster under their bed: investigate the monster. How do we deal with problems like this, Allison? Clinically and unemotionally. 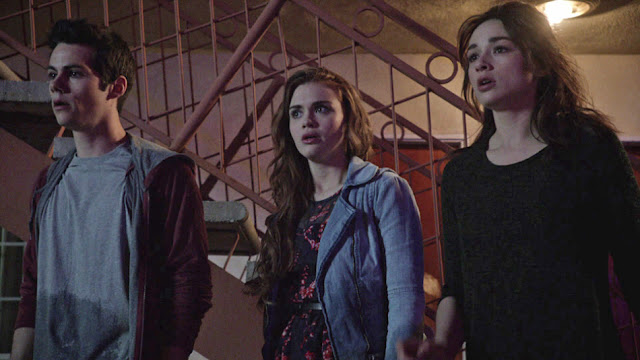 It's official: Ethan is a complete and utter nightmare. I kind of thought he was gonna be ~swayed by the power of love~ or whatever, but no. He's still a total psycho. "I hope you don't get brutally murdered in my unnecessary werewolf gang war," he says to Danny, looking 1% concerned about Danny's wellbeing, and 99% not giving a shit. WHEN IS SOMEONE GOING TO EXPLAIN TO DANNY THAT HIS BOYFRIEND IS A MURDEROUS CREEPAZOID? The Alpha Pack are just beyond me. Deucalian is clearly straight-up Voldemort evil, but Kali and the twins more or less seem to be just... following him...? Like, presumably they enjoy power, but... is this ever going to be explained? WHAT IS THEIR MOTIVATION? I mean, it's pretty clear that Danny is not Ethan's equivalent to Allison, because he's not actually doing anything to put him in any less danger. He's just expressing a vague sense of regret that Danny might end up being a civilian casualty in Ethan's joint quest to kill a bunch of people for really spurious reasons. In summary, Ethan: not a nice guy. 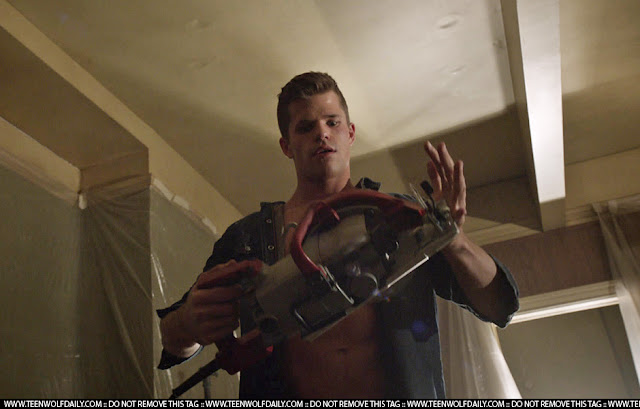 And now, onto the most vital aspect of this week's episode: Dennifer. Was it cheesy as fuck? Did include a deeply cliched "I'm too dangerous to love" conversation, as I predicted two weeks ago? Yes and yes. But do I give a shit? Hell no. Against all odds, the Jennifer/Derek romance scenes managed to be genuinely engaging, party because Jennifer is super adorable (SUPER adorable), and partly because Derek is really, tragically in need of some love. Even if he is completely terrible in almost every respect. 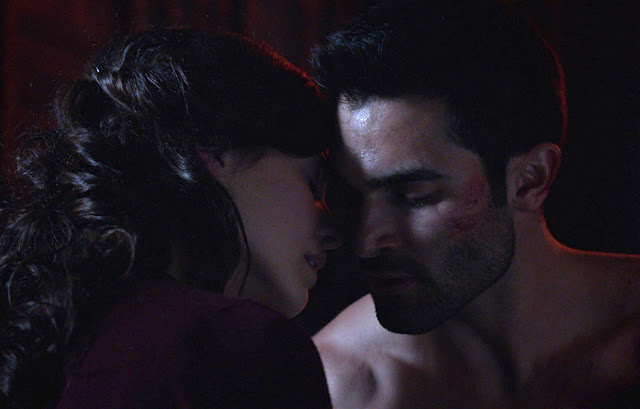 I was super into the way they kept putting Derek into the passive role, with his primary facial expression being "OMG, I'm getting kisses :(((". Teen Wolf: good at ignoring gender roles. In other news, is having sex while bleeding from abdominal wounds the werewolf equivalent of period sex? THAT'S LOVE, BABY. That's love. "You're like one giant open wound," murmurs Jennifer, before telling Derek he looks like a corpse, and then having sex with him for the rest of the episode. Own your kinks, ladies! If you're into guys who bleed a lot, then Derek is a real good choice -- particularly since he apparently doesn't even own a first aid kit. And from a poetic standpoint, "giant open wound" is a pretty accurate description of Derek Hale's personality. Agonising pain on the inside; romance novel cover model on the outside. ~~perfect boyfriend material~~ 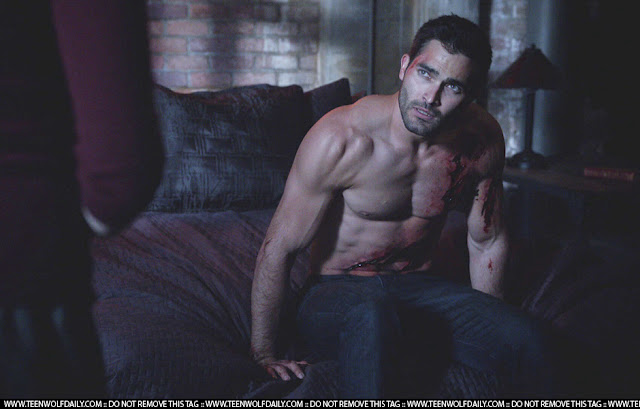 Finally, I hope we all joined hands and wept in unison during that Scott/Stiles friendship scene. Sad emotions tears falling from Dylan O'Brien's glistening eyes! Tyler Posey somehow managing to make a deeply cliched self-sacrifice speech believable and emotional instead of embarrasing and Harry Potterish! FRIENDSHIP!!! Stiles and Scott's BroTP is deeply beautiful to me and if they ever break up then I'm gonna have to go to TV Rehab Therapy. 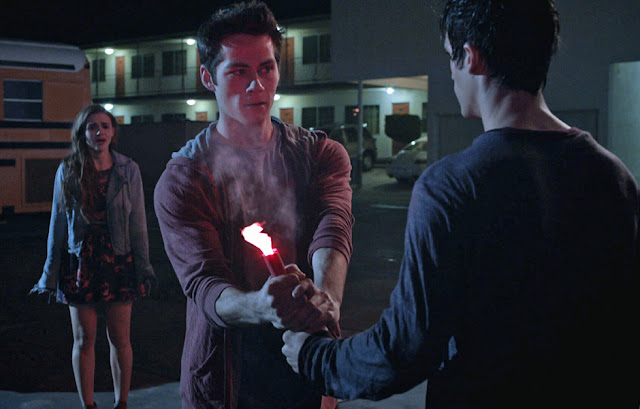 Find me on Twitter @hello_tailor, and Tumblr at hellotailor.
Posted by Hello, Tailor at 06:29