Person Of Interest: The man in the suit.

Person Of Interest is three different genre shows stuck together. For Detectives Carter and Fusco it's a police procedural drama, whereas John Reese lives in a spy thriller and Harold Finch's story is gradually edging towards being a full-on dystopian cyberpunk sci-fi. Overall it's marketed as a crime show, more or less, which is what it mostly looks like on the outside. Like the majority of characters in procedural cop shows Carter and Fusco have very boring dress-sense, for practical and professional reasons. In costume design terms, the real interest lies with Finch and Reese. 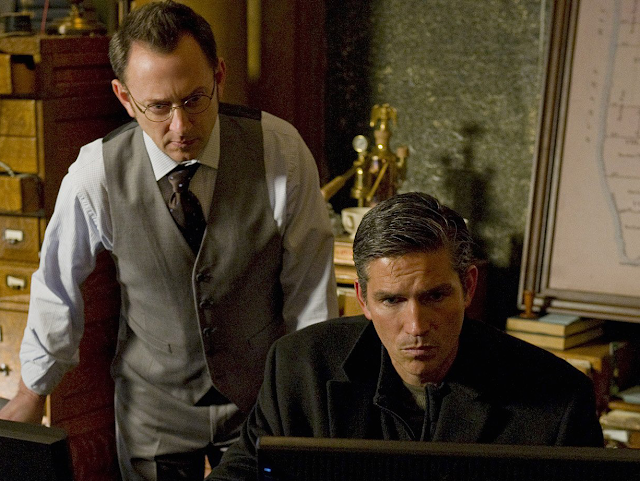 Before I even saw the show, Reese had been described to me as a man who wears his clothes like a uniform. When he first appears he has nothing: no home, presumably no money, no real identity... until Finch comes along and sets him up with his very own apartment and a wardrobe full of identical black suits. Mysterious benefactors are a popular theme in fiction -- who doesn't wish a nameless billionaire would show up and randomly gift you with a new house? -- but Person Of Interest has a refreshing way of tackling the subject. Rather than twisting himself up in knots about receiving so much help from a total stranger, Reese just takes it. 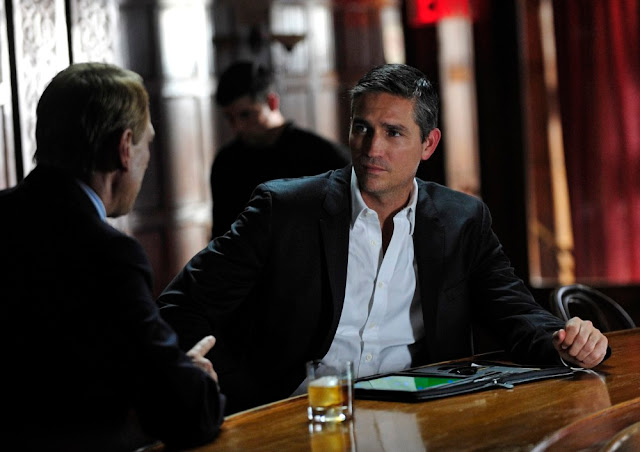 What with his CIA training, subsequent betrayal, homelessness and total lack of friends or family, Reese is a man who has been stripped down to his bare bones. The things that normal people care about just do not bother him any more. Actually, Finch is like that as well, but for him it's more because he's been elevated beyond ordinary society thanks to his wealth, genius, and devotion to the Machine. With Reese there are scenes in almost every episode where you see him just fail to react to things that would have any normal person shying away in discomfort. 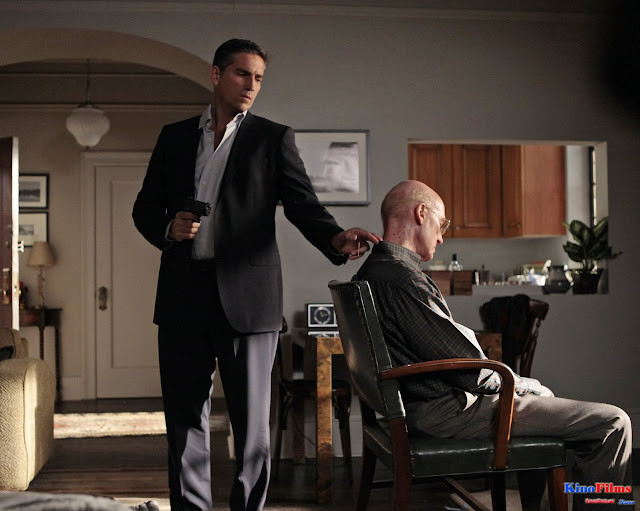 He doesn't care about people touching him or getting in his personal space. He doesn't care about money. He doesn't care about being watched and tracked constantly via CCTV. He doesn't care about getting beaten up, except in the sense that it's an inconvenience. When Finch picks him out of the gutter and sets him up in an enormous loft apartment with his own private arsenal, the only thing Reese is openly thankful for is that Finch has given him a purpose again. When you get right down to it, the only thing he really cares about is efficiency, which is why he wears the same outfit every single day of his life -- barring necessary disguises. Not having to think about clothes or look in the mirror every morning just removes another obstacle between him and his mission. 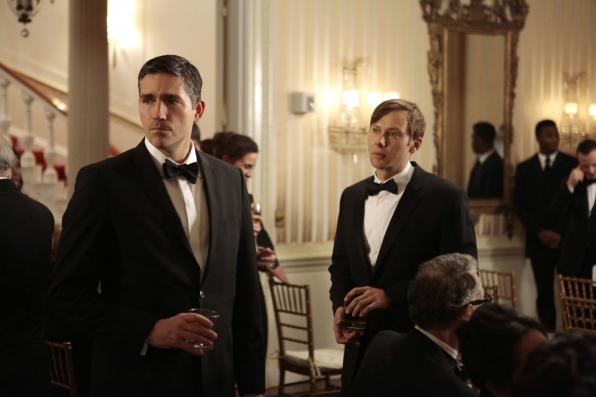 From a purely practical standpoint, Reese's monochromatic wardobe of identical suits is a stroke of genius. For all that you can compare the John Reese/Harold Finch duo to Batman and Bruce Wayne, Reese's main strength lies in his complete lack of distinguishing features. Although he's definitely good-looking enough to get by with a little superficial charm when the need arises, Reese is forgettable enough to be the perfect spy. The fact that his nickname during the police manhunt was "the man in the suit" tells you all you need to know, because as soon as he changes out of the suit? They don't even have a physical description. The sheer boringness of the outfit just amplifies how forgettable he can be, never mind how ridiculously easy it is to get into almost anywhere when you're a white, middle-aged man in a suit. 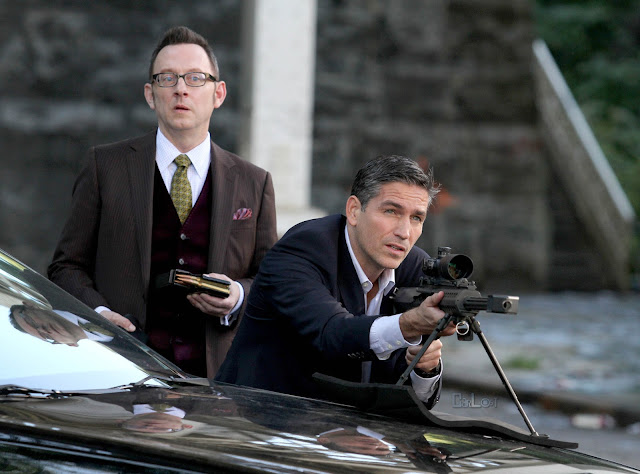 Finch's attitude to clothes is the polar opposite of Reese. Just by looking at him you can tell that he really enjoys dressing up -- even before you find out that he's a tailoring nerd. While Reese dresses to look as forgettable and generic as possible, Finch dresses for himself. Despite the fact that he spends most of his time alone in a disused library, he wears a three-piece suit almost every day, often including a pocket square. He definitely has different grades of suits, though. When he's just going to be sitting in front of a computer he wears softer, more comfortable outfits in warm colours like brown and maroon, whereas on days when he's going undercover in one of his millionaire personas he wears suits that are more obviously businesslike and luxurious in appearance. 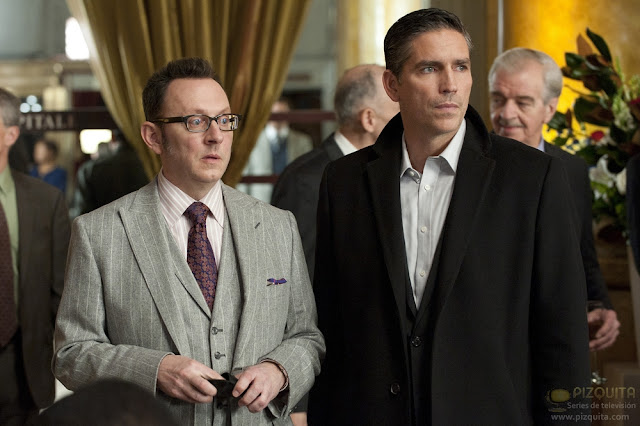 Both Finch and Reese's suits have been cleverly matched up to the physical appearance intended for each character. Jim Caviezel, who is in reality beginning to look rather thicker around the middle than is ideal for a elite special-forces agent, looks far slimmer in his black suits than in anything else he wears on the show. His jackets are very rarely buttoned, both because an open jacket allows for more flexibility during fight scenes and because it's far more flattering to Caviezel's broad-shouldered frame. Finch's suits are typically quite soft by contrast and the waistcoats make him look a little rounder, which fits in with his list of harmless, birdlike cover identities: Finch, Crane, Wren, Partridge. Like most stories that focus on a partnership, the two characters have to balance each other out. While brains/brawn would be an unfair description considering Reese's skill as a tactician, it's certainly the case that much of Reese's strength lies in his ability to physically intimidate, whereas Finch relies on people mistaking him for the boring, fussy middle-aged man he appears to be. 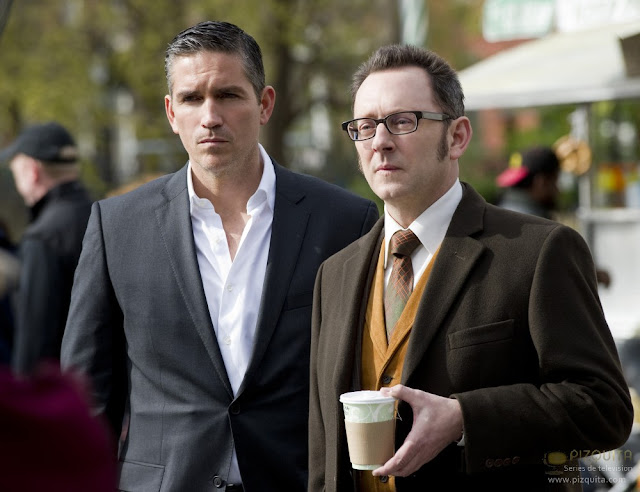