Previously: Part 1: Bond as a blunt instrument. and Part 2: The new Bond Girls.

You thought Bond Season was over? Well, it's never over. I gotta be suitblogging 24/7, or else I wither away and die. Bond costumes are always a big deal because the films rely so much upon 007 coming across as the coolest guy you could possibly imagine, which can sometimes be a little tricky when you're dealing with a man who wears a two-piece suit every day of his life and spends most of the time interacting with other men in two-piece suits. But hey! They managed it. And will almost certainly be ignored at the Oscars for their trouble, because when it comes to costumes nobody ever nominates movies set in the present day. 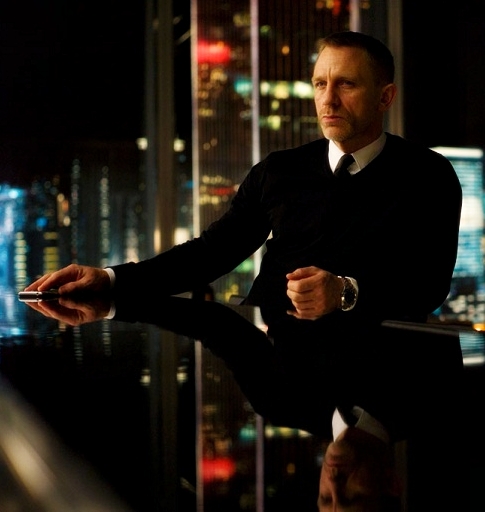 The lynchpin of Bond's style is his timelessness. His staple outfit in the novels is a navy blue suit with a black silk knit tie, a costume that can be handily reintroduced at any point during the five-decade history of the films. While Bond's style does evolve somewhat over the years, the only slip-ups have been when he tried to be too on-trend, such as that period in the '70s when Roger Moore thought it would be a good idea to start wearing flares. In many ways 007's character is rather conservative, meaning that while he does come across as stylish and timeless, he's also the type of guy who'd be tremendously out of place in mainstream modern culture. Even back in the '60s he was overtly and manfully ignorant of popular culture, claiming that the Beatles were unlistenable. The James Bond brand has survived this long in part because it's so damn hard to make him seem out of date.

It goes without saying that Bond films are going to be immensely stylish all round. But if you know me at all (or my philosophy re: character-driven costume design, anyway) then you may be able to guess why I enjoyed the costuming in Skyfall so much. Much of the film's success stems from the fact that all of the side characters are fully-fledged people rather than being two-dimensional stereotypes, which immediately makes them easier to design for. And of those characters, pretty much all of them (the exceptions are Kincaid and Sévérine, and to a certain extent Eve) wear some variation of a suit most of the time they appear onscreen. For a high-profile, high-budget movie like Skyfall, a great deal of thought must go into costume and character design, but when so many of the characters have to wear "similar" outfits then it gets much more interesting.

More detail on Bond's own costumes is hardly even required. Once again Daniel Craig goes into battle wearing a selection of fashionably tailored suits that look so tight they might as well have been sewn around his body. Like several other movies in the franchise, Skyfall's first act shows Bond getting knocked down and having to drag himself back from a combination of gunshot wounds and alcoholism. Luckily, Naomie Harris is there to help him shave off his angst-beard. (Gotta love an angst-beard.) For a while he slums it on the beach with an unnamed girlfriend and predictably Bond-like quantities of booze, but soon enough he ditches the wrinkled trousers and grungy leather jacket and it's back to Tom Ford menswear for the rest of the movie. Since the filmmakers expect the audience to have at least a passing familiarity with Bond already, there isn't much need for any further extrapolation, costume-wise. 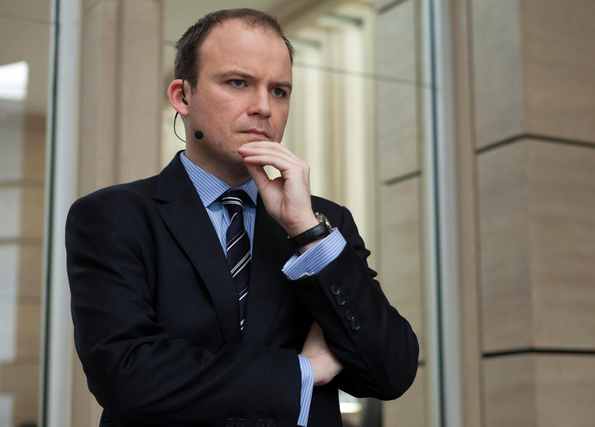 Tanner is the Agent Coulson of MI6. Bland in appearance, he nevertheless seems to be fairly high up in the hierarchy, and cares deeply about his job. He wears the most "normal" suit of them all, looking like an everyday businessman compared to Bond's expert tailoring. Ralph Fiennes' Mallory is at the other end of the scale, wearing old-fashion and heavily masculine suits with high-waisted trousers held up by wide braces. This fits in very well with his character, who at first represents the British government before evolving into a younger version of the type of gentleman's-club, ex-military M we saw in the earlier films.

I really liked the new Q. While Ben Whishaw looks like a bit of a dweeberoo, his character was unexpectedly confidant and funny. Most action/adventure movies require a geek character to do some dramatic typing and shouting about subroutines and firewalls while the hero shoots at things, but they generally tend to go the route of one-note nerd stereotype. But rather than reeling off Whedonesque pop-culture references or freaking out in the face of danger, Q is calm and witty, an excellent foil to the dark sarcasm of the rest of the MI6 crew. He and Bond are physical and philosophical opposites, but they warm to each other quickly as Q earns Bond's respect with far more ease than most people. Q's clothes have a vintage/hipster aesthetic, with him wearing a no-doubt expensively geek-chic zipper cardigan and an oversized anorak that makes him look even tinier and younger than he already does. (N.B. The day I found out Ben Whishaw was an entire decade older than me was the day I started looking up cursed portraiture on Etsy. That is some Dorian Gray shit right there.) As the female head of a government agency, M's fashion choices are in some ways more limited than those of her male counterparts. Appropriately for a person who relies upon anonymity, she wears the most unobtrusive suits possible, in dark or neutral colours and with a reasonably feminine cut. My favourite outfit of hers was for the journey to Scotland, where she was bundled up in a warm woollen coat and a blanket for the long ride in Bond's chilly and uncomfortable Aston Martin. (N.B. I very much enjoyed this hint at Bond's value of style over substance: the beautiful but impractical vintage car.) Oh and as a side note for the true nerds: I'm pretty sure the grey trenchcoat she wears to visit Mallory at the beginning of the film is meant to be the same one she wore in Casino Royale. 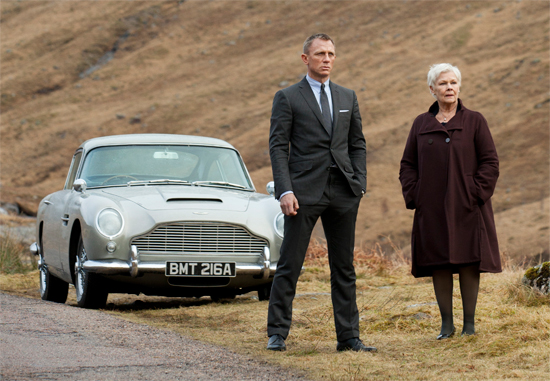 Something I picked up on during my second viewing -- and probably qualifies as costume design conspiracy theorising -- is the similarity between Helen McCrory's outfit during the enquiry scenes and one of the suits worn by M earlier on in the movie. Helen McCrory's character is a government minister who leads the questioning during the enquiry into MI6, and she seems particularly keen on taking M down. The suits in question are both made from a kind of rough, tweedy fabric tailored softly around the body with a collarless neckline. I think I noticed the similarity partly because M's suits are usually rather more traditional in cut and fabric, and partly because Helen McCrory's character bears more than a little resemblance to M herself. Not only do they have the same upper-class accent, but Helen McCrory is somewhat facially similar to Judi Dench -- although of course this could all just be coincidence. But I like to interpret this scene as the younger, more idealistic and rule-abiding M interrogating her older and more cynical counterpart. 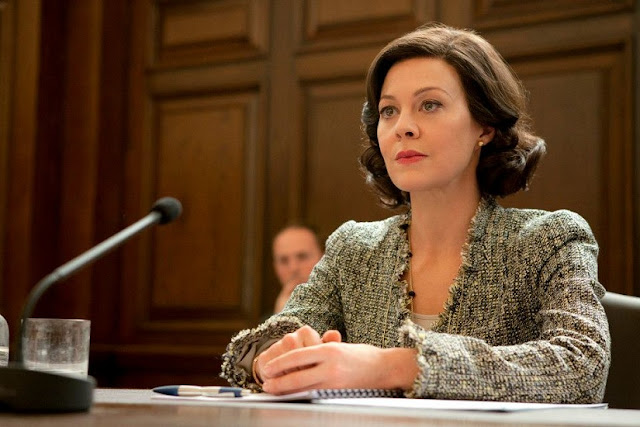 Eve's costumes showed a very strong sense of personal style, mostly following a warm colour palette of golds and oranges that suited Naomie Harris beautifully. Although the gold dress she wore during the casino scene was the most memorable of her costumes, I particularly enjoyed the outfit she wore at MI6 headquarters. The soft blouse and mustard-yellow skirt stood out from the horde of grey-blue suits in the background and fit perfectly into the kind of Topshop business-casual fashion one sees a lot of in central London. When she returns at the end of the movie to begin her new role as Moneypenny she's considerably more formal, wearing a tight blue dress with asymmetrical seams similar to those of the gold casino dress. 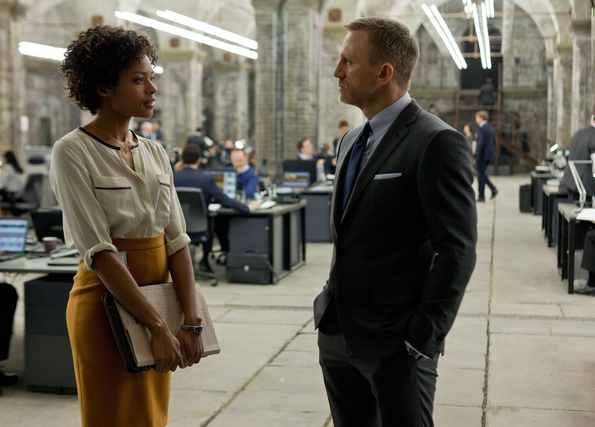 Sévérine undoubtedly wears the most ostentatious costume in the movie, in the form of her translucent black evening gown. As the polar opposite of Bond's low-key, timeless suits, this costume will start looking dated almost immediately, for all that it took six months 60,000 hand-applied crystals to create. The whole look, from Sévérin's dramatically dark lipstick to her claw-like false nails, is purposefully attention-grabbing, but it only really works because Berenice Marlohe is so stunning. My opinion is that the dress is a lot of effort for comparatively minor effect, since tattoo-inspired crystal patterns on sheer black are kind of tacky, and the whole style seems about ten years too old her. I guess Sévérine is meant to look vampy, but the reality is that she's crammed into a weirdly rigid bustier and ultimately ends up looking rather more Liza Minelli than femme fatale. This was my least favourite of all the outfits she wore throughout the film, although I admit that it does fit her character fairly well. 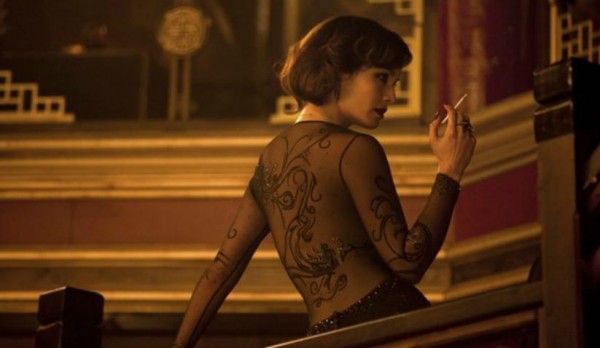 Despite the importance of Silva's role, I actually found his costumes to be among the least interesting in the movie. Appearance-wise, most of Silva's impact was down to a combination of styling (the unnaturally blond hair and eyebrows) and Javier Bardem's performance. Silva is a character who looks far, far better in motion than he does in pictures, mostly because it takes a very skilled actor to sell that level of ridiculousness. Not everyone could carry off that wig, for one thing. And as for the costumes, I suspect he was intended to have slightly bad taste? He isn't badly dressed, as such, but the loud Prada shirt combined with a dark waistcoat and pale jacket looked purposefully weird compared to Bond's more sombre style. Still, I far preferred that outfit to the black leather coat he wore for the final showdown, which almost made it seem like Silva was purposefully dressing up as a supervillain. 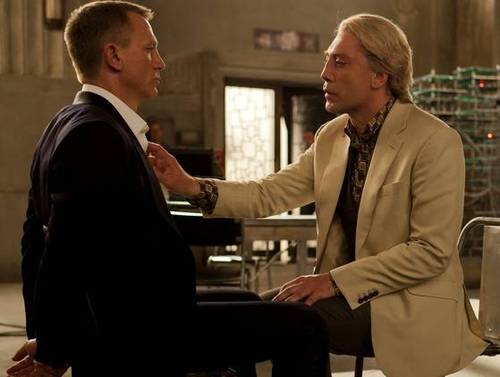