"I always wanted to put this line of clothing out in the world. But the humor of it was not understood, maybe, until now." -- Yoko Ono.

I've reviewed my fair share of supposedly-ridiculous menswear since starting this blog, and it always inspires a very different reaction to the more outlandish fashions for women. It's not exactly news that women get a lot more leeway than men when it comes to personal style, but I feel like Yoko Ono's designs are not even all that bizarre when compared to something like the puffball outfits and rubber fetish masks of Walter Van Bierendonck. 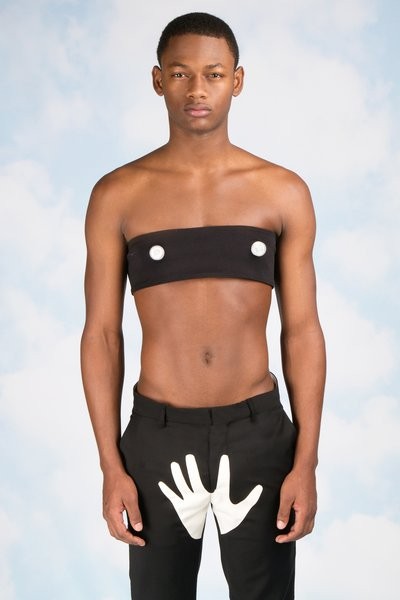 The clothes in Ono's line for Opening Ceremony (originally drawn in 1969, and inspired by John Lennon's "sexy bod") are relatively simple, mostly consisting of conservatively-cut trousers plus a range of t-shirts, jackets and hoodies. They're even in a restrained palette of black and white with a few pink accents -- and in 2012, pink is no longer a big deal for mainstream menswear. The "weirdness" is honestly very low-key, but is still getting huge amounts of publicity because a) Yoko Ono, and b) isn't it super hilarious when men's fashion makes overt references to sex? 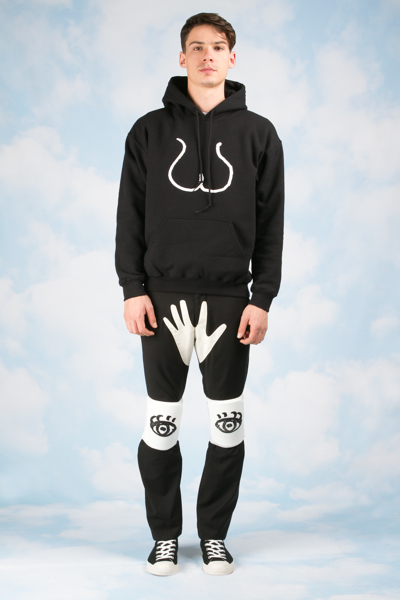 OK. So. These clothes are not really what most people think of as "sexy". And since the main logo for the collection is a cartoon of a butt, I'm gonna go ahead and assume that Yoko Ono isn't 100% serious either. Plus, of all the things that Yoko Ono has done in her long career as an artist, activist and unreasonably-reviled widow of a famous dude, designing a collection of outfits with hands on the crotches and LED nipple accessories is not particularly shocking. And yet people who ordinarily wouldn't be paying attention to Yoko Ono or to menswear design are paying attention to this particular collection, because it's so utterly far from the norm. 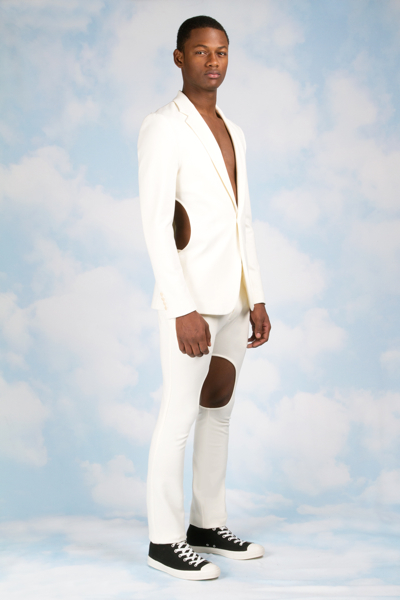 Ignoring the obviously comedic touches like the crotch-hands and belts with doorbells on them, the main reasons why this collection can be described as "ridiculous" are to do with gendered dressing. For men, formalwear means covering your entire body except the hands and face, whereas for women it usually means that at least your arms and shoulders are bare, if not more. For women, accentuating and exposing various parts of your body is the norm, whereas pretty much all menswear boils down to the basic model of a suit or jeans-and-t-shirt combo. In this collection, Ono sticks to the jeans-and-t-shirt formula but adds enough implicit nods to feminine styles that for many men, wearing these outfits would be tantamount to dressing in drag. 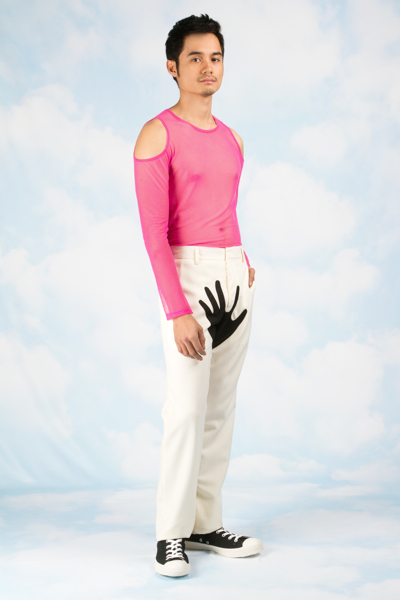 “Men were always wanting us to look good and take off everything, and we were never able to enjoy men’s sexuality in that way.” -- Yoko Ono.

Transparent fabrics? Exposed skin? Anything that hints at the presence of an erogenous zone? These are all design elements that are the exclusive purview of women's fashion, because much of womenswear design is about making the viewer look at and think about the body underneath the clothes. There are a hundred ways in which women are socialised to dress, sit and behave in order to attention to one's body in a certain way, but in the menswear lexicon there really is no concept of "clothing designed to make you think about nudity". A traditionally sexy outfit for men is an expensive suit; a traditionally sexy outfit for a woman is a tight dress with a lot of cleavage. 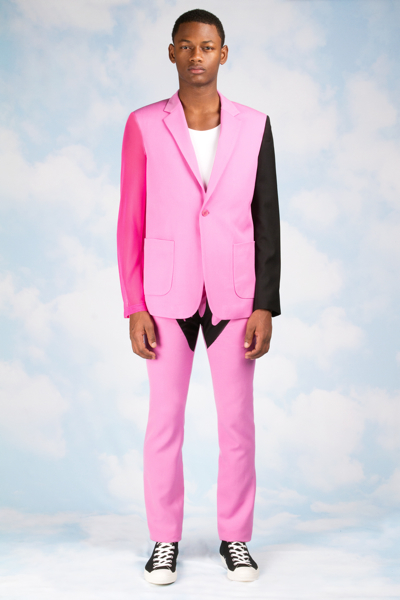 Final thought: If you think these clothes look a little odd when worn by professional models, then just try to imagine how they'd look on someone old or overweight. The analogy isn't exact, but while it's perfectly acceptable for a 50-year-old mother to show a little cleavage or wear a skirt to the office, the idea of a 50-year-old dad wearing a translucent shirt is practically inconceivable in mainstream society.
As for artistic merit, this isn't the most interesting menswear collection I've ever seen but it's certainly not the worst. I think this is one of the few instances where the celebrity of the designer actually counts in the collection's favour, since if these same designs had come from an unknown designer or a major fashion label they'd have been dismissed as "weird fashion". Thanks to Yoko Ono's status as an artist (and the collection's tangential link to John Lennon), these designs are receiving enough mainstream coverage that a few more people than usual will be thinking about gendered fashion -- and that can only be a good thing.

Read more: http://www.thefader.com/2012/11/29/interview-yoko-ono-on-assless-pants-and-the-color-pink/#ixzz2Dd6AREif
I always wanted to put this line of clothing out in the world. But the humor of it was not understood, maybe, until now.

Read more: http://www.thefader.com/2012/11/29/interview-yoko-ono-on-assless-pants-and-the-color-pink/#ixzz2Dd6AREif
I always wanted to put this line of clothing out in the world. But the humor of it was not understood, maybe, until now.