I was reminded of this film when I saw Drive this weekend. Drive and True Romance both have this sensitivity/brutality, garishness/darkness dichotomy thing going on, and despite wildly differing in tone, both stories are in similar veins of "petty criminals get in over their heads" + sweet romance. Ryan Gosling's scorpion-pattern jacket is already iconic enough to have inspired fan-made posters, but it comes from the same school of cheap, artificial-fibre colourful Americana as the less famous costumes of True Romance. 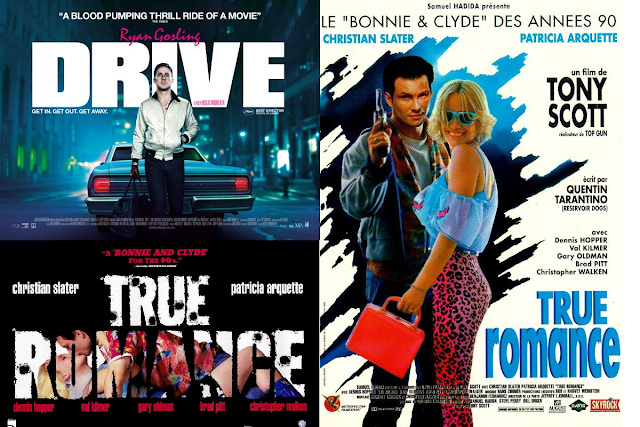 True Romance is an early '90s psychos-in-love romantic thriller: Badlands or Bonnie & Clyde by way of Quentin Tarantino. In fact, in true Tarantino referential style, the theme music of True Romance is adapted from Badlands itself.

My main reason for loving the clothes in this movie is Alabama, Patricia Arquette's character. If I saw this woman in real life I would instantly want to congratulate her on her style. Throughout the film she's wearing these hyper-tacky, candy-coloured outfits in varying levels of public inappropriateness (there's a lot of visible bra going on, a look that's approved by Tracey Emin, Betsey Johnson, and not very many other people). The picture above says it all: matching blue bra, plastic earrings, sunglasses, belt, and -- although you can't seen them -- boots. Plus a cow-print skirt. It's marvellous.

When we first see Alabama she's wearing what we could probably interpret as her work clothes as a call-girl, if we didn't later learn that she really does dress like that all the time. 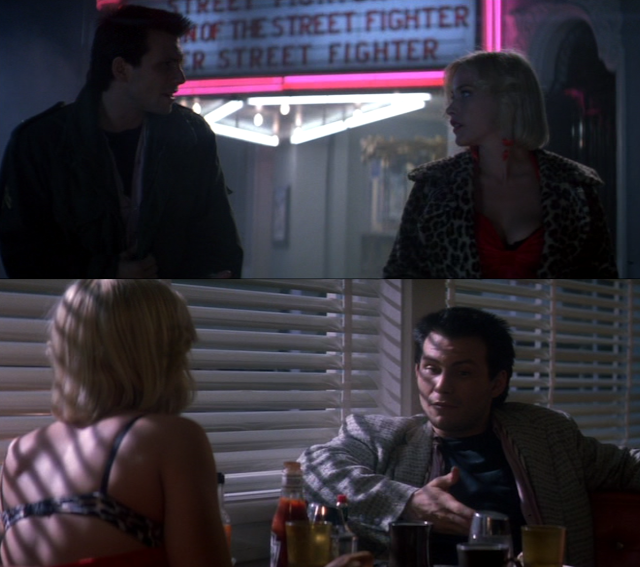 Red earrings, red lipstick, red velvet dress, and leopard-print coat. Leopard-print bra that's totally visible past the halter-neck of the dress, in accordance with the "if you're wearing awesome underwear then people had better be able to see it" rule. Apparently Tony Scott originally wanted Drew Barrymore for the role, which indicates to me that they already had a fairly specific physical "type" in mind for Alabama, a kind of curvaceousness that isn't very visible in Hollywood, especially at the tail end of the gym-obsessed '80s beauty standard. As with any truly character-based costume design, a lot of Alabama's sartorial success is down to the fact that the clothes are perfect for her body type. Alabama's taste is garish to the point of eccentricity, which on a tall, skinny actress would have looked like some kind of ironic fashion magazine photoshoot and therefore not fit the character at all.
Clarence (Christian Slater), on the other hand, is kind of a slob. A '90s slob wearing multiple shirts and a thrift-store jacket. I guess this is actually a pretty good illustration of what "cheap" looks like from opposite sides of the gender divide.

From the titles sequence onwards the film makes it pretty obvious how cold and miserable Detroit is for Alabama and Clarence, with Alabama often being the only piece of colour onscreen in the earlier scenes (aside from Clarence's awesome Elvis-pink Cadillac). Once we get to L.A. Aalabama gets way more warm-weather, buying clothes and sunglasses at rest-stop shops on the way. I loved this because in a lot of films when a character either becomes "free" or receives a financial windfall, there'll be a montage of them spending a bunch of money and/or getting some kind of makeover, Pretty Woman style. But Alabama doesn't start dressing any classier, and neither her nor Clarence seem to be changed by their experiences. Until they meet each other they both seem to be loners and fairly oddball characters -- Alabama a call-girl who's just moved to Detroit, and Clarence a comicbook store shop assistant who spends his birthday watching movies by himself -- but both also seem to have a lot of integrity towards their own values and habits. This actually reminded me quite a bit of Badlands, of Sissy Spacek's character bringing her schoolbooks with her even though she was going on the run with a mass-murderer.

You get the impression that Alabama really isn't as immature as her girlish persona and plastic-toy-coloured wardrobe suggests. At first she seems like a bit of a "hooker with a heart of gold" cliché, but she's also got this ongoing amoral/Wild West justice element to her personality, indicating to me that she's really not as naive as she appears.

Before he meets Alabama, Clarence tries to pick up this girl in a bar who, on paper, looks very similar to Alabama:

Unfortunately the light isn't too good in this screencap, but she's got the same bleach-blonde hair, a fur coat, bright makeup and enormous tacky earrings. In fact, she looks a lot like Drew Barrymore, Tony Scott's original choice for the role of Alabama herself. But unlike Alabama, who has this unselfconscious exuberence to her expressions and actions that mirrors the way she looks and makes it charming and eyecatching, this woman gives the impression of being a lot less happy and adventurous. She's drinking by herself in a dingey sports bar, and society tells us that that smacks of desperation. She's Alabama in a couple of years, maybe, if Alabama had never met Clarence. This shirt is fantastic. Where do you even FIND something like that? It's perfect for her -- a combination of cutesy patterns, fragility and sluttiness. Plus the pink leopard-print leggings. She's rarely seen without some kind of fake animal skin on her body, is Alabama Worley. Either that, or polka-dots. If I were to describe her style in one word, it'd probably be "bimbo". The blonde, perky girl is a staple of American pop-culture but usually she's either an idiot or a bitch, Mean Girls style. This makes me appreciate the few characters like Alabama, Buffy or Legally Blonde's Elle Woods, who turn those stereotypes around by proving that one personality trait doesn't necessary predict another.

It's nothing more than laziness to create a character merely by using a couple of quick visual cues -- a problem far more dangerously illustrated by the fact that most American/Canadian actors of middle-Eastern descent can currently have a lively TV career playing nothing but terrorists. By expected TV/movie logic, if you took someone who looks like Alabama and put her in a comedy she'd most likely end up being a one-dimensional caricature. But the fact that she's in a crime thriller that takes place -- more or less -- in the grim real world, her over-the-top appearance actually makes viewers pay more attention to her character rather than sidelining her as a bimbo, because it seems inconceivable that anyone could be as cartoonish as she looks. And they'd be right.

Every Halloween you see people dressed as Uma Thurman's character in Pulp Fiction, mostly because it's an easy costume to make (black wig + white shirt and fake blood) and it's easily recogniseable for that all-important OMG I TOTALLY LOVE THAT MOVIE non-conversation at parties. As Tarantino's first big film (if that, because while it's his script he didn't direct it), True Romance is kind of a precursor to Pulp Fiction and his other more famous movies. Although I have more affection for True Romance I do think that Pulp Fiction is the better film, but in my opinion Alabama is a far more interesting character than Uma in Pulp Fiction, as well as (and yes, critics, I know this isn't very "important") far better dressed. I'd love to see an Alabama Worley or two knocking around next Halloween -- I'd dress as her myself, if I didn't lack almost every physical attribute necessary to make these outfits look good. 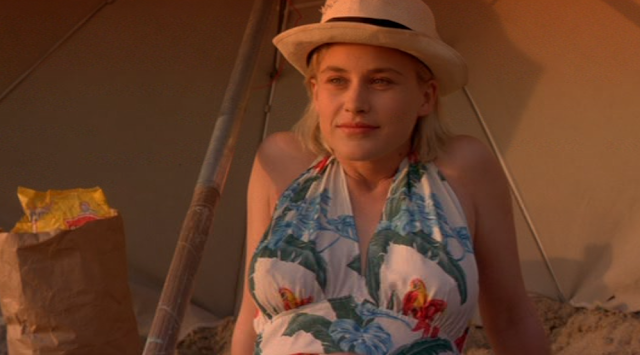 For her happy ending at the beach, Alabama's style is still her own but a lot more relaxed. She's still got this very un-1990s rockabilly femme vibe that we see in the first outfit (the halter-neck dress _ lipstick) though, I think. 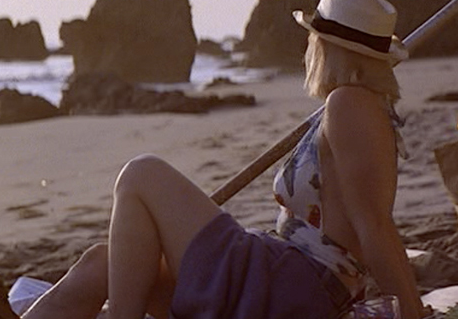 Gary Oldman is in this movie. I state this simply because often when one points this fact out to people who have already seen the film, their minds are blown. Why? Because he plays Drexl, Alabama's horrifying pimp who thinks he's black because he's 1/4th Cherokee. The way he plays Drexl makes it pretty difficult for the viewer's brain to make the connection to "white British character actor".

In case anyone needs a second to wallow in thoughts of Gary Oldman's ridiculous versatility as an actor, think about Harry Potter. Then think about the Fifth Element. Then check out my post on his most recent film, Tinker Tailor Soldier Spy.
Maybe part of the reason why Alabama wears so much leopard print in the first scene is because her pimp likes it. You can't see it all here, but he's wearing a floor-length leopard-print robe in this picture. With black satin lapels. And nothing under it apart from boxers. You know, Gary Oldman made his own dreadlocks for this movie! (Wow, Gary. I WOULD NOT BE SURPRISED IF HE ALREADY HAD THE ROBE AND HAT IN HIS WARDROBE. The teeth were his idea as well.) 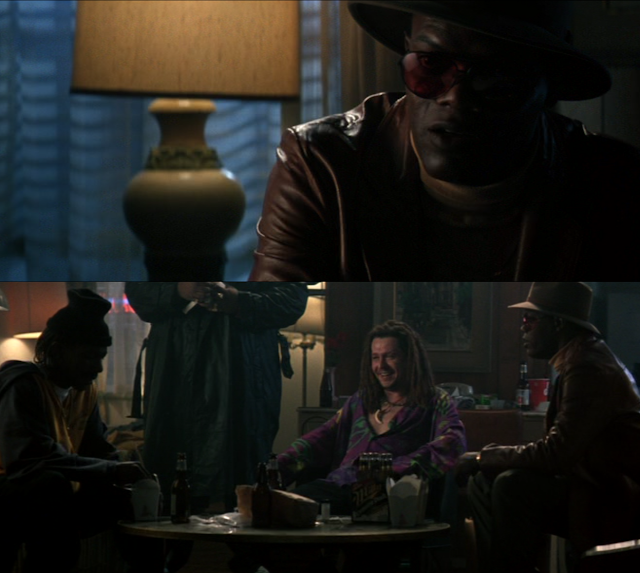 I'm posting this group shot because I love the way these characters, like many walk-on roles in Tarantino films, are all immediately recognisable stereotypes. All three are criminals, but what you end up with is: Africab-American guy in sweats and a bunch of gold jewellary, Drexl the druggie pimp who wants to be black, and Samuel L. Jackson as a straight-up 1970s gangster who wouldn't look out of place in an episode of Starsky & Hutch. Mustard-coloured rollneck sweater? Brown leather jacket? Scarf? Hat? Maroon sunglasses? Awesome. And in the background we can see the bottom half of Drexl's "muscle", because everyone who's ever experienced any Western fiction from the past 500 years knows that the muscle has no identity or personality of his own, and is usually a guy who stands in the background with his face obscured while other people get the dialogue.

At the other end of the criminal-stereotype spectrum we have Christopher Walken's character, who is delightfully Christopher Walkenish and delivers one of the most recognisably Tarantino-esque scenes in entire film. He's a Sicilian mobster, in case you couldn't deduce that from the fact that he looks like the ultimate #1 Sicilian mobster.
He knows how to accessorise. And I'm not just talking about the three silent goons paid to stand behind him and laugh at his threats/jokes while looking dapper yet menacing. 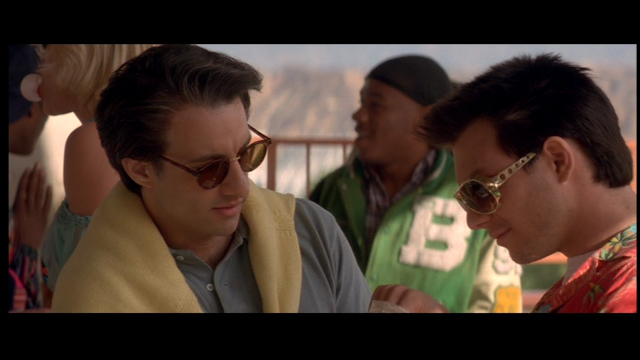 This guy (Elliot Blitzer) is a brilliant example of character-costuming. The awful cashmere-sweater-over-shoulders/fwoofy '80s hair prepster aesthetic gives off such an instantaneous "I'm a douchebag" vibe that you already know which way his character is going to go before he opens his mouth. In this scene he and Clarence clearly scorn one another, although Elliot is more obvious about it -- Clarence knowing that Elliot is a snivelling middleman, and Elliot making assumptions about Clarence based on the fact that he's wearing dollar-store sunglasses and is a complete Hollywood outsider.

So, are the costumes of True Romance life-changingly brilliant? Probably not. But they're real. They work incredibly well in context. And more importantly, some of the characters live up to expectations while others break free of the assumptions people make based on appearance, just like in real life. (But let's not front -- this post was mainly just a love song to Patricia Arquette's cupcake/call-girl visible-bra outfits. LIVE LONG AND PROSPER, GOLD SUNGLASSES OF ~TRUE LOVE.)