It's almost expected at this point for Alexander McQueen to be one of the most critically acclaimed shows of Fashion Week, but this season's collection was so good that I dove off a waterfall like Pocahontes and then spontaneously sprouted wings on the way down. While most of Spring season is taken up by catwalk shows that showcase too many trenchcoats and not enough imagination, McQueen (currently headed up by Sarah Burton, McQueen's protege) breezed in with 32 stunning outfits themed around bees and beehives. 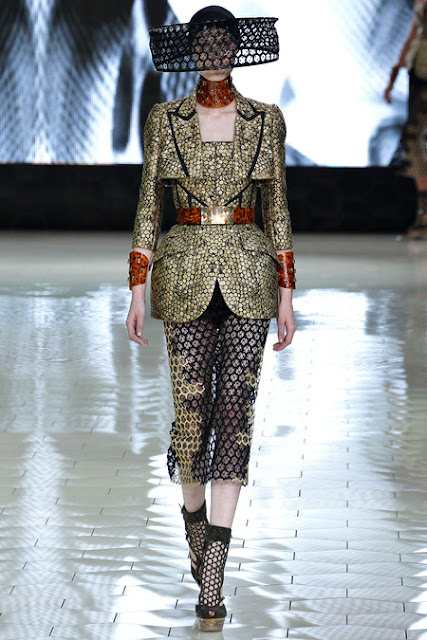 The show opened with a series of suits in black and gold, bearing the recurring motif of honeycomb patterns and accompanied by stylised beekeeper hats. The silhouette was familiar: rigid bodices and nipped-in waists, with the angular peplums McQueen have been using for several seasons now. "Wasp waist" is already a well-known term, but some of these suit jackets reminded me more of the iridescent shells of a beetle. 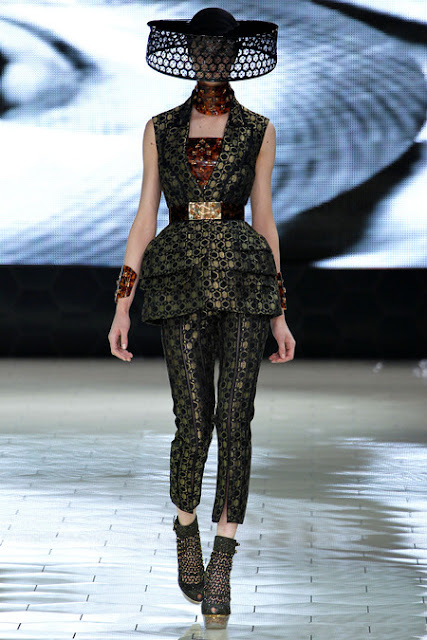 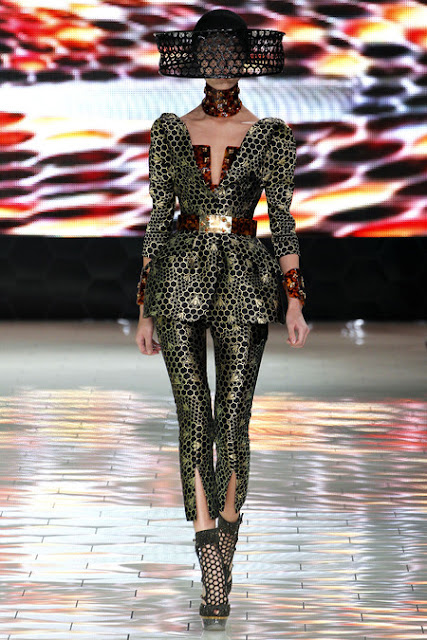 I've written before about the dangers of taking a design theme too literally, but this is surely the exception that proves the rule. Not only is Sarah Burton an accomplished director when it comes to keeping the McQueen look fresh without deviating too far from recogniseable design tropes, but she can balance a potentially cartoonish theme like "beehives" at the perfect level between outright literalism and references too subtle or obscure for audiences to pick up on. 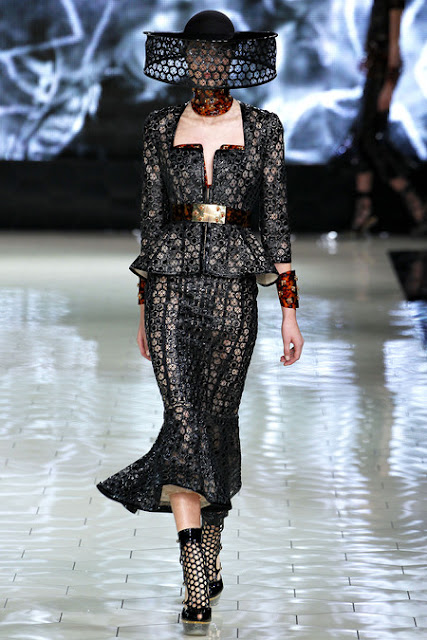 If this were any other label I'd balk at the idea of taking a beehive theme and producing outfits that combine not only beekeeper hats but golden honeycomb embroidery and wasp waists, but McQueen has a long history of delving into specific aspects of the British countryside and bringing out something that is simultaneously beautiful and horrifying. The main surprise in this collection is the lack of sting. While previous seasons have seen models wearing slaughtered game-animals and antlers, this collection was decidedly more cheerful. 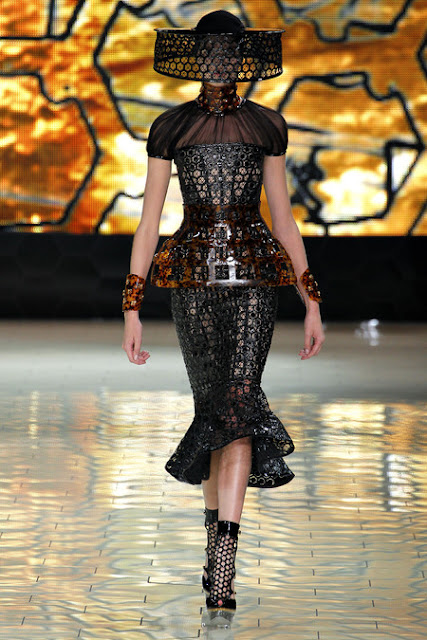 The second section of the show was taken up by softer silhouettes: corseted gowns with frame crinolines, another aesthetic mined from the McQueen back-catalogue. The colours were warm and honeyish, with the gowns sometimes taking on a frothy and seasonal peasant-skirt silhouette: milkmaids rather than beekeepers. 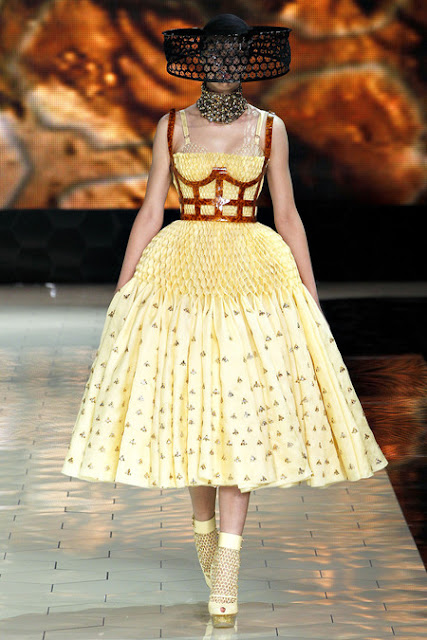 If you look closely at some of the fabrics, there are tiny golden bees embroidered into the honeycombs. 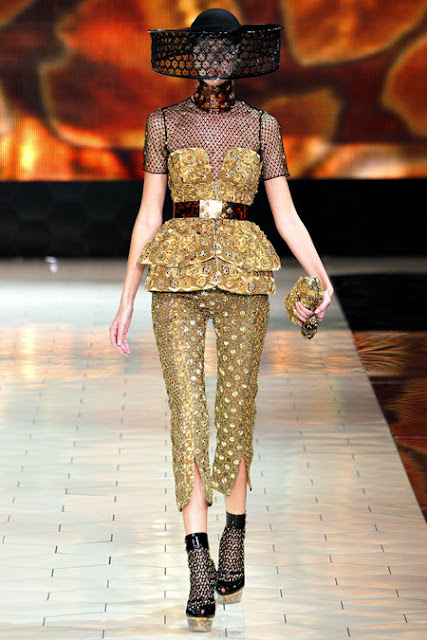 This outfit, with its visor-like hat and golden honeycomb patterns, reminded me of acclaimed costume designer Eiko Ishioka. 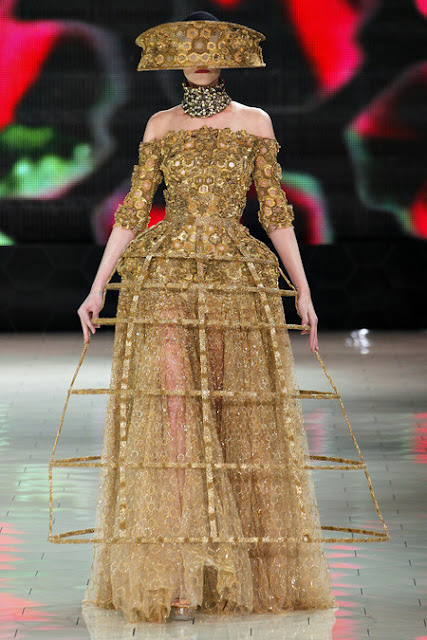 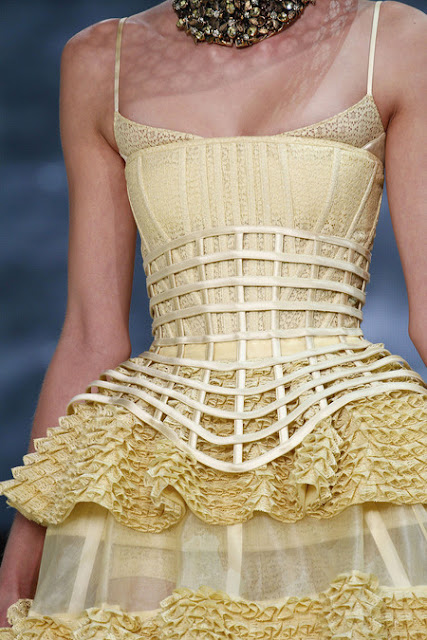 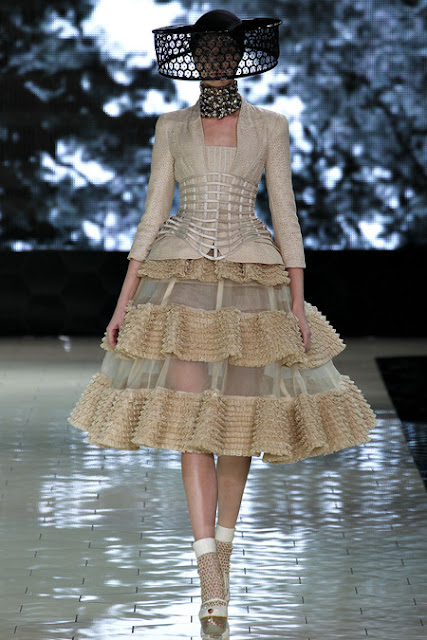 The final phase of the show was dedicated to flowers: huge, overflowing bundles of blossoms covering the kind of crinoline dresses that will most likely only ever appear on runways and in private collections. The tortoiseshell bustiers from earlier on in the show lost their aggressive edge and became mere accessories to the rest of the outfit. 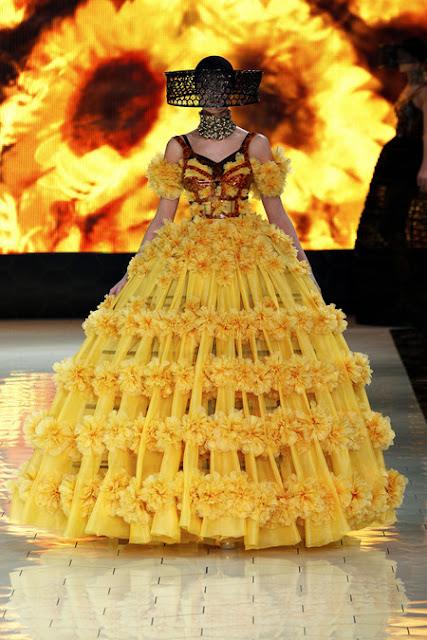 I tend to scoff at Spring collections that use florals because the idea is so grossly overused every year, but in this case I'll allow it because it's so complimentary to the rest of the show. This was a Spring collection through and through: exploding with energy, and celebrating themes of nature and rebirth without resorting to cliche. 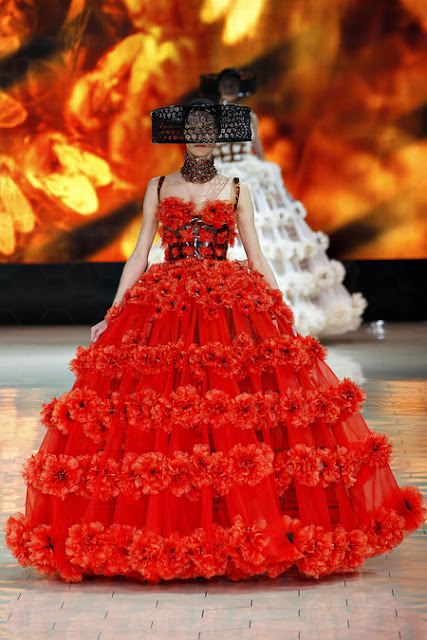 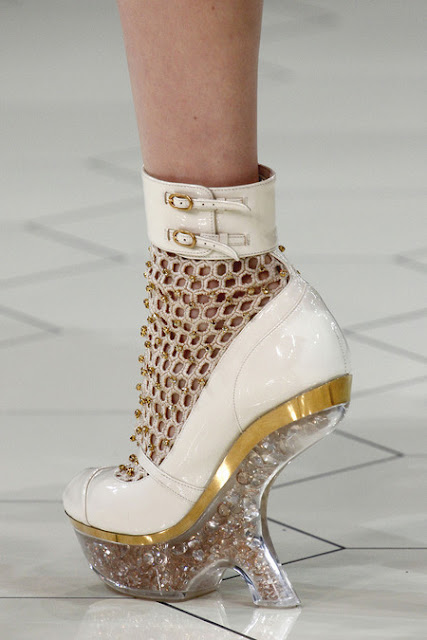 Postscript: I'm v proud of myself for managing to not refer to any "buzz" surrounding this show, or indeed mention anything to do with the McQueen Bee.