My continuing love-affair with the costume design of Revenge.

I'm impressed by the way Revenge has transitioned smoothly from its original single-season arc to a more long-running format. With a specifically goal-oriented storyline like Emily's revenge plot I was worried that we'd end up in a Twin Peaks type situation with the writers frantically trying to pull new plotlines out of nowhere, but season two is already shaping up to be excellent. I don't see much point in discussing every little plot detail because there are just so many, but my favourite thing so far has been the way Victoria's resurrection was revealed almost immediately. Revenge is a soap opera at heart, but it's damn well-written, and I admire the decision to let Victoria out at the beginning of the season when a lesser show would surely have kept that secret hanging over half of the characters for much longer. 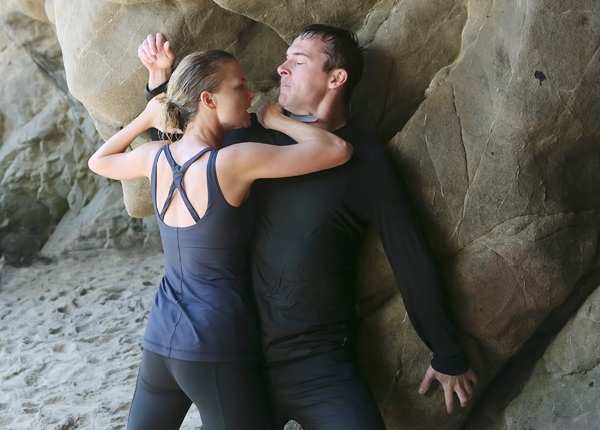 The huge gap in Emily's backstory is a real gift to this show, particularly since it means we now get to see a whole bunch more of her Batman side. Batmanda is one of my very favourite parts of Revenge because watching intelligent women coolly brutalise their enemies makes my heart blossom like a flower. Sadly this storyline also comes with one of the worst aspects of the show, ie the two-dimensional racist stereotype that is Takeda, but fortunately it seems like his mentor role will be explored more thoroughly this season. Flashback scenes to her Batman training with Takeda are particularly interesting because she has such a radically different attitude towards him than she does towards anyone else in the show. In the Hamptons every person aside from Nolan is an unknowing pawn in her revenge plans, but Takeda is in the unique position of having Emily genuinely look up to him for guidance. 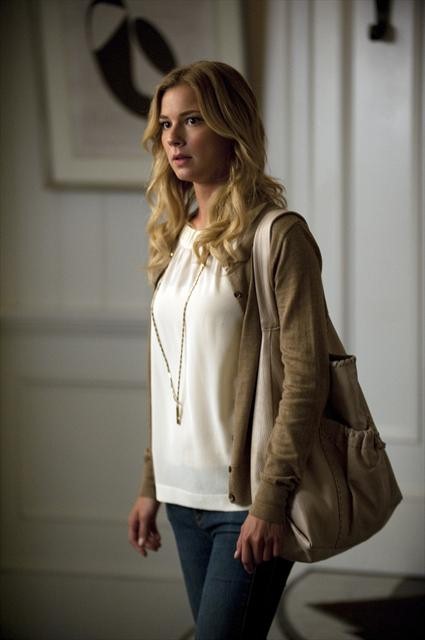 Emily's costuming has made me happy right from the start because it says so much, both about her own characterisation and about how much the showrunners have thought about the way she views herself. Revenge is the latest in a very long line of dramas about rich, attractive people trying to destroy each other -- not to mention the fact that the lead character is a woman who purposefully manipulates her enemy's son into marrying her. The obvious route to go with this would have been to make her into a vamp, but in reality Emily's dress-sense is very subdued. I think she's calculated very carefully to project this girl-next-door persona which not only requires her to act nice and bland all the time, but also involves this whole wardrobe of casual white t-shirts and pretty but nondescript summer dresses. The clothes she wears to parties fit in perfectly with the rest of Hamptons society, but she always looks rather more demure than Ashley or Victoria Grayson. Ironically, it's the seemingly genuine nature of Emily's persona that makes her attractive to Daniel Grayson in the first place, because her simple style and quiet, charitable disposition provide such a contrast to most of the other women he knows. 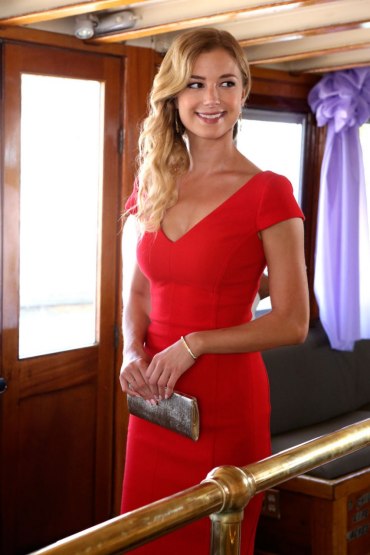 So I kind of loved it in the first episode of season two, when Emily showed up to the Graysons' boat-party wearing this ridiculously hot, eyecatching red dress. Emily doesn't usually like to draw attention to herself, but in this particular case it was a Breakup Dress, a protective outfit for her first appearance back in the Hamptons after last year's very public breakup with Daniel. A totally valid choice both for Emily herself, and for her good-girl persona. Oh, and another thing re: that scene? I loved Nolan's temporary disguise as a normal Hamptonite who wears sombre ties and doesn't pop his collar. In fact, I enjoy any formalwear/party scene where Nolan and Emily are together, because while Emily is almost always in disguise, Nolan is almost always in costume, dressing up in playful mockery of the people surrounding him. In this case he's gone for the pinstriped businessman look, but he nevetheless stands out from all the other men because as usual, he's gone several steps too far.
This season sees Nolan continue to be a glowing blond demigod of delightfulness, with the additional gift that he's temporarily moved in with Emily. In case anyone's wondering what my reaction was when I realised that they'd fallen asleep on the sofa together while watching blackmailable security footage, the answer is that I built a set of wings out of wax and feathers and then flew towards the sun until I self-immolated and fell down to earth as a shower of sparks and ashes. Nolan and Emily are the best thing ever and made even moreso by the fact that Nolan apparently packs a red, white and blue-striped dressing-gown in his overnight bag. Along with flamingo-pattern boxers.
While I'm happy to see some things remain the same (see above re: Nolan's penchant for colour-coded pocket squares and popped collars), other aspects of the show are being greatly improved by change. Daniel Grayson, for one. For me, Declan was the real weak-link in season one so I'm glad to see him become less of a dick in recent episodes, but Daniel's transformation from Hamptons himbo to businessman-with-a-backbone has been even more interesting to watch. As of 2x02 we've already seen him stand up to his father in a real argument between adults, make actual real-life use of his business degree (yes, Daniel went to college, remember?), and simultaneously become more ruthless and go out of his way to do the right thing by Charlotte. And as the transformation took place, his personal style graduated from Ivy league douchebro to full-on Young Republican, complete with Romney hair. 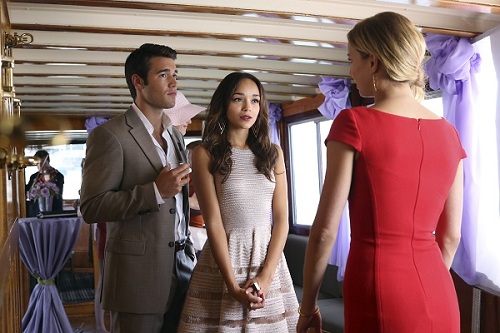