Chanel, Spring 2013: At least there's no iceberg this time?

What's the theme of this season's show? You know there must be one, because Karl Lagerfeld is in charge. This time last year it was an Under The Sea theme featuring Florence Welch emerging from a conch shell, but this one is a little more obscure. I'm going to let you mull it over a bit and then reveal the truth after the cut, so for now just take a gander at this outfit and try to divine its ~hidden meaning~.
Of all the challenges one has to face in order to reach the Fashionista's Stone, Lagerfeld's would surely be the Snape-style brain-teaser that relies too heavily on metaphor. Actually, the idea of Lagerfeld as Fashion Snape is worryingly believable...
Yes, it's that obvious theme for a Spring fashion show: renewable energy! You can tell because there are a whole bunch of windmills and the runway was made to look like solar panels. And stuff 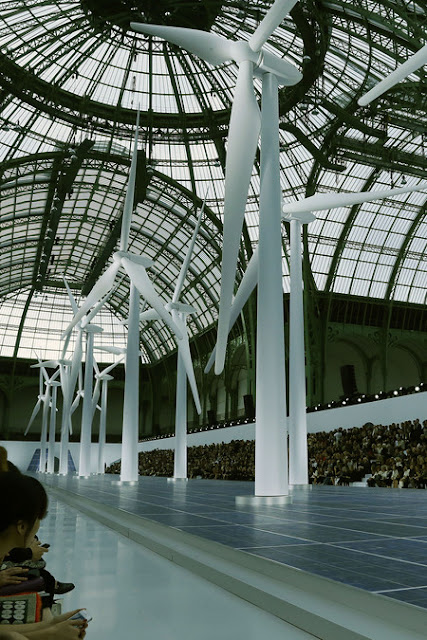 "Energy is the most important thing in life," said Lagerfeld, informative as always. Evidently he's already forgotten that one time he had an iceberg shipped in to adorn one of his previous fashion shows. That's so 2010. 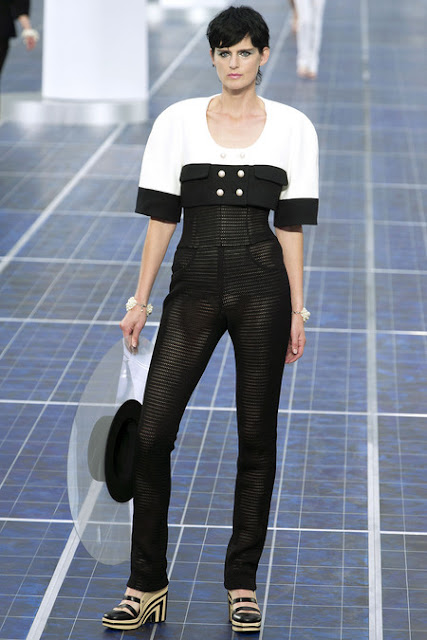 Aside from the characteristically out-there theme, the clothes themselves were relatively conservative and fit solidly within Chanel parameters. This being Spring RTW there were a lot of variations on the boxy Chanel suit, but made a little lighter and more summery by chopping the sleeves off at elbow level and cropping the jackets to bolero length. 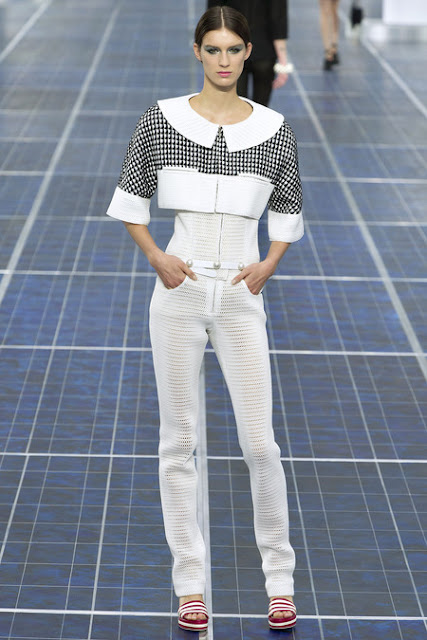 Also usual for Chanel (or, more specifically, Lagerfeld's Chanel), was the focus on outfits for thin women. I'm yet to see a ready-to-wear Lagerfeld outfit that would work for anyone with big boobs, but since Lagerfeld is notoriously fat-phobic this doesn't come as a huge surprise. Much of this particular collection relied on a slim waist/bulky jacket combination that while flattering to some figures, is unlikely to work very well unless you're an A-cup or comfortable with looking like your upper torso abruptly triples in diameter somewhere around your sternum. 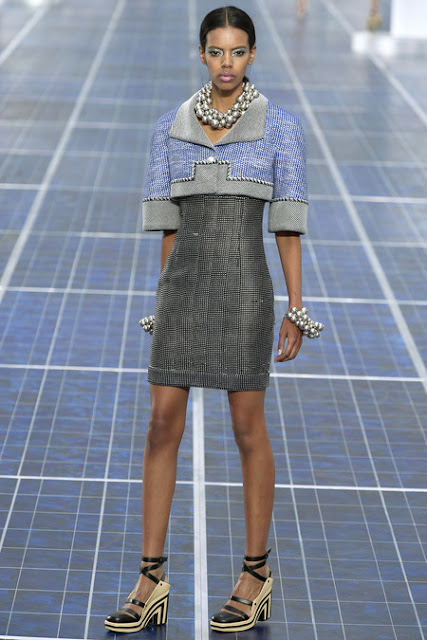 Oh, and there was an uncomfortable-looking photovoltaic panelling dress, because did you know there is a theme. 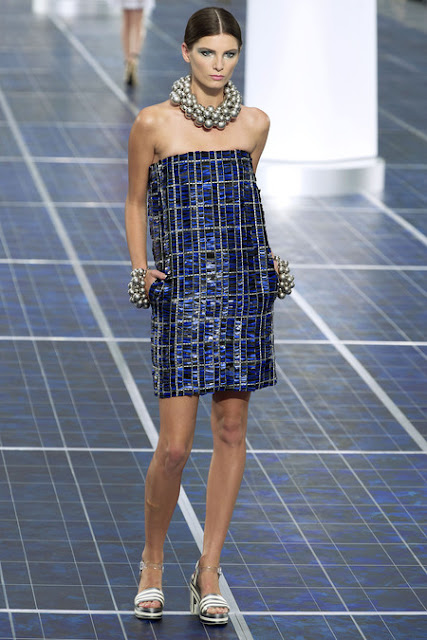 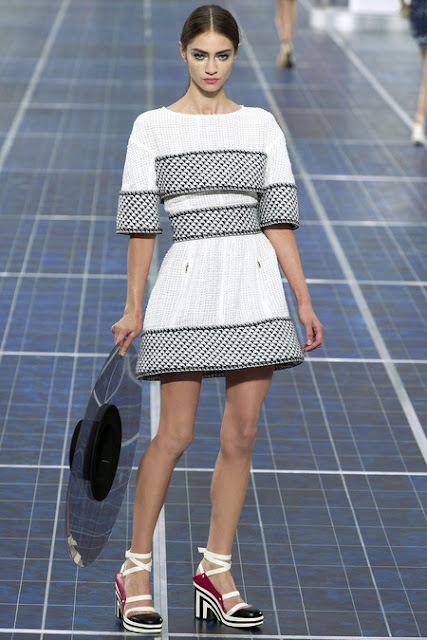 For all that I find Lagerfeld to be an endless source of entertainment, Chanel is never going to be the label for me. My favourite things from this show were undoubtedly the accessories: Bright, stripey wedge-heels, and wide-brimmed hats. I love the idea of a summer hat with a completely transparent brim; it's just so gloriously impractical. Wide-brimmed hats are terribly feminine and summery but transparent/shiny materials like this are generally seen as futuristic, the end result being what looks like an Ascot hat for characters in Blade Runner. 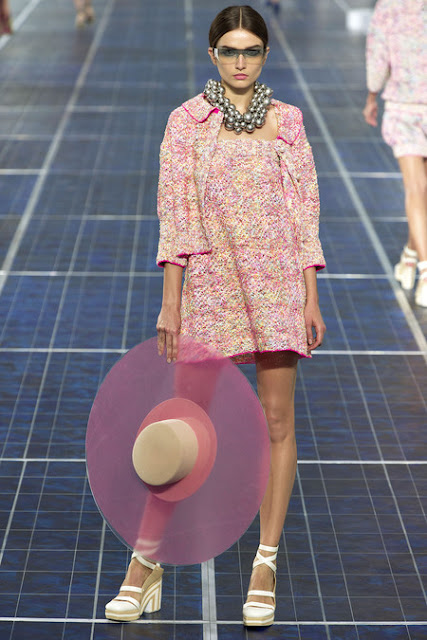 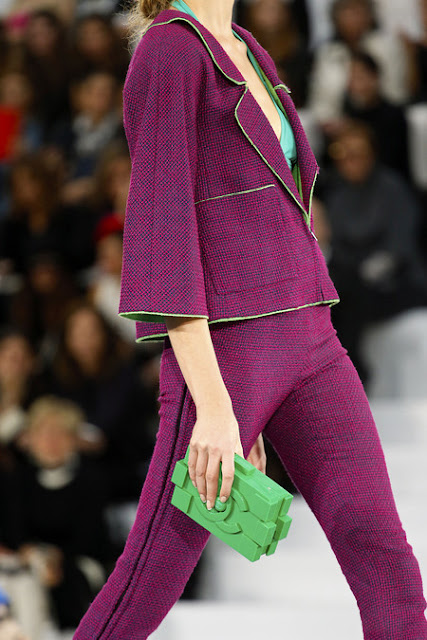 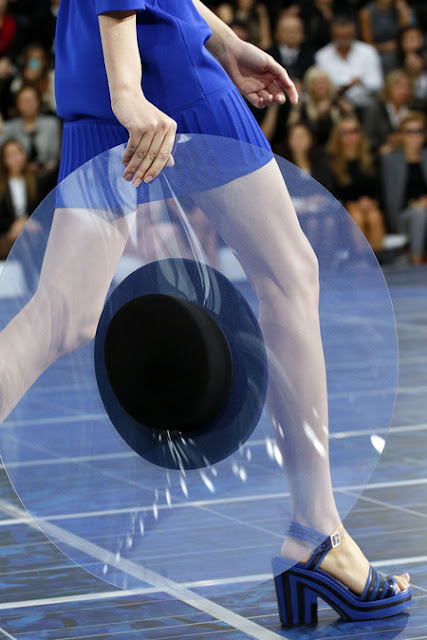 As a postscript, I give you two of the worst outfits I have ever seen in a Chanel show. The fact that Lagerfeld approved the manufacture of a strapless denim minidress is surely something that will haunt him to the grave. [Edited to add: This outfit is even worse than I originally thought, because someone on twitter just pointed out to me that it makes her look like "one giant butt".] 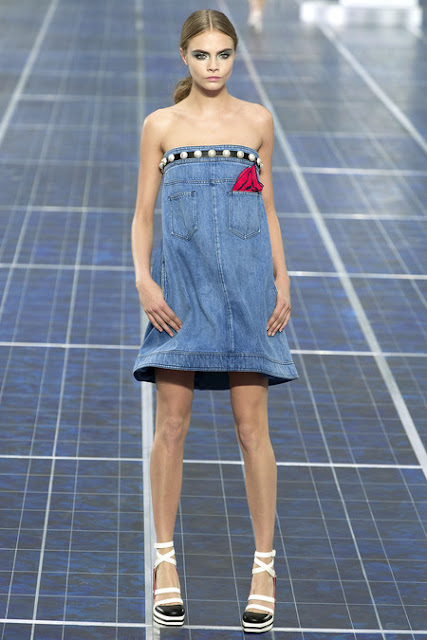 I don't even know what this is supposed to be, but I hope no one buys it. It's like someone took one of the ABBA-themed costumes from Priscilla Queen Of The Desert and then tried to make it look as depressing as possible. And decided to glue some fishing lures all around the hems, for whatever reason. HORRIBLE. 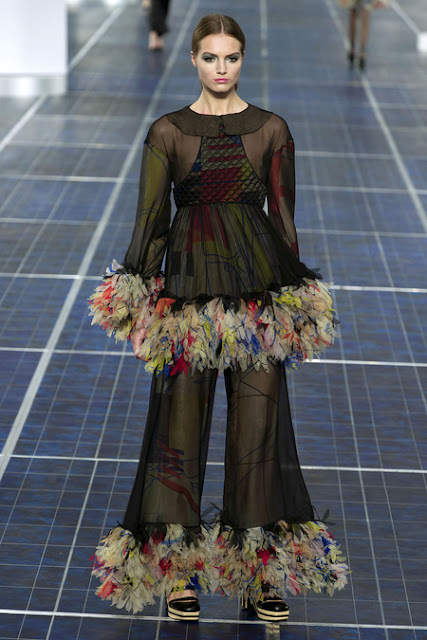 Click here for previous posts on Chanel.
Posted by Hello, Tailor at 12:03