Nick Fury didn't make much of an impression on me in the previous Marvel movies, aside from the the fact that his presence was telegraphing the possibility of a future Avengers team-up. Samuel L Jackson is one of those actors who can steal the show merely by playing himself, which is great for a cameo role but doesn't have a great deal of emotional or intellectual impact. But Fury's role in The Avengers is far more fleshed-out, and SHIELD is very clearly Nick Fury's baby. And Jackson's as well, in a way, since he originally had a hand in pressuring Marvel to increase SHIELD's presence in the first Iron Man film.
Fury's costume should be the silliest at SHIELD. Most people who wear ankle-length leather coats 24/7 tend to resemble late-1990s Blade or Matrix wannabes, but Fury gets away with it because he's Samuel L Jackson and he can probably have you vanished if you look at him funny. The coat should be cumbersome, limiting and easy to trip over, but since we see Fury firing rocket-launchers at fighter jets while running around his giant invisible flying aircraft-carrier, I'll handwave all that. Either way, we know that Fury's pretty fond of that coat because he wears it all the time, even when he's meeting Tony Stark for breakfast in Iron Man 2. Fury's costume in Avengers is tougher than the more relaxed outfits we see in his previous appearances, though, with a visible thigh-holster and a bulletproof vest. The vest I find particularly telling because while he spends most of the movie in his own home base, the Helicarrier, he still feels the need to be armed and protected at all times. He didn't survive this long by taking any chances.

The Nick Fury we see in Avengers is far more interesting than the two-dimensional hardass we met in those prequel cameos. He's been fleshed out into someone whose life and work extends far beyond the Avengers Intiiative, who always has to be thinking five steps ahead of his enemies, his superiors and his underlings, and who is altogether a far more morally ambiguous character than any of the other "good guys".
Agent Coulson is one of my favourite characters in the Marvel universe. Originally appearing in a minor role in Iron Man, Marvel quickly realised that Clark Gregg's sly, understated humour was gaining him a significant fanbase. I've read interviews where Joss Whedon et al seemed to think that Coulson's popularity is down to the fact that he provides an everyman character for the audience to identify with, but I'm inclined to think it's more to do with his quiet competence providing a counterpoint to the bombastic, showy nature of characters like Tony Stark. In a way he's the Alfred Pennyworth or Ianto Jones of The Avengers -- often in the background, but never unimportant. 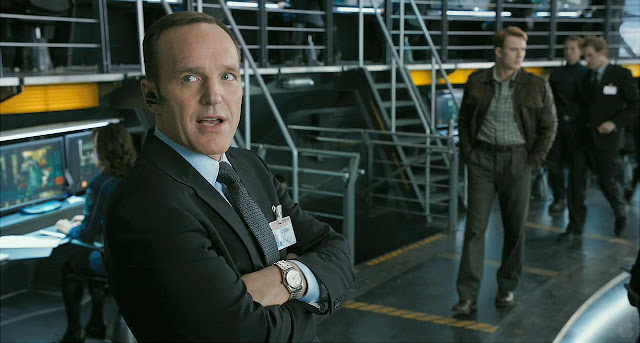 Coulson's role at SHIELD is never really specified. He's high up on the food chain, working directly alongside Fury and usually getting sent on missions that require someone to act as a liaison or negotiator between SHIELD and a potential threat. He's kind of the superhero babysitter, and seems to be a person who is very aware of his own image -- a small, unassuming man with a suit and a nametag who will pose no apparent threat to the gargantuan egos of people like Tony Stark and Thor. Perfectly happy to act in the beta-male role while remaining quietly confident in his own abilities. The generic two-piece suit is very much part of that deceptively bland persona, but I enjoy how it's evolved over the course of his Marvel movie appearances. In Iron Man, for example, he looked quite different: 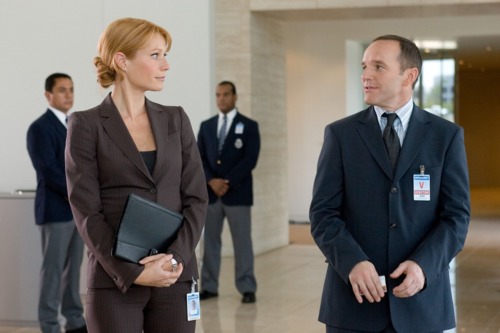 The original Coulson was meant to be more of a nerdy beaurocrat, a G-Man who spends most of the film trying but failing to arrange a meeting with Tony Stark. And his suit does not fit at all! The sleeves are way too long, it isn't tailored around the shoulders or waist, and it generally makes him look like a bit of dweeb when compared to Tony's billionaire playboy wardrobe. Whereas in The Avengers, Coulson's Dolce & Gabbana (seriously) fits like a glove, with one precise inch of shirt-cuff emerging from the sleeves.
Maria Hill, Nick Fury's deputy, is our first real look at a more typical SHIELD agent. The pre-movie advertising gave the impression that she was going to have a far greater role than she actually did, and I suspect that this oversaturation of Cobie Smulders/Maria Hill publicity was because they were very aware that out of an ensemble cast of around 15 characters, only three are women, and only one of those women is in a starring role. While The Avengers wasn't explicitly sexist, it did follow the Hollywood habit of setting all action/adventure stories in some parallel universe where women only make up about 25% of the population. This isn't a criticism of Hill's characterisation, which was more or less what you'd expect from a businesslike second-in-command/expository dialogue character. The cast is already so big that there's no time to expand every character, but the fact that Cobie Smulders was featured so prominently at the Avengers premieres and press events does rather highlight the fact that the first-tier cast consists of seven men plus Scarlett Johansson. 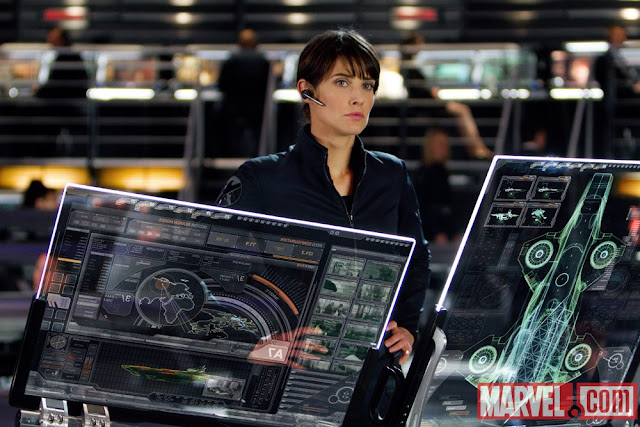 Another issue that The Avengers shares with the Star Trek reboot is that both franchises originate in the '60s, and the characters are now so beloved that augmenting the lineup in a remake/adaptation would alienate fans. This troubles me because while I find it irritating and belittling to watch so many movies where women are under-represented in token or love-interest roles, I'd still react negatively if the next installment in the Star Trek reboot series suddenly introduced three or four new Enterprise crewmembers to a cast that already feels whole and complete. With The Avengers, however, there is the option of including a whole host of female characters from the extended Marvel universe, even women who were in the Avengers team themselves, like Wasp. Because this film was the product of a long game of semi-prequels -- Iron Man, Captain America, Thor and The Hulk -- it would've been difficult to introduce another new first-tier character this time round, but I hold out hope that the Avengers sequel(s) will include more lady superheroes. Or Darcy Lewis from Thor. Because Darcy is awesome.

I have mixed feelings about the SHIELD uniforms as we see them in The Avengers. The fitted jumpsuits/trousers-shirt combos worn by most of the agents onboard the Helicarrier don't look too bad, but I'm a little confused as to why they're wearing them. They look like field uniforms, but we already know that field agents either wear normal clothes like the suit-wearing Coulson, or out-and-out military gear (like the soldiers sent to pick up Bruce Banner and guard Loki when he's on the Helicarrier). Also, the people on the bridge of the Helicarrier are analysts and pilots, doing what essentially amounts to desk work. Although Hill and Fury do both carry sidearms, the fact that female SHIELD agents have the option of wearing a skirt and heels indicates to me that the agents on the bridge of the Helicarrier are not expected to be battle-ready.
Joss Whedon doesn't seem to believe in the idea of "background characters". A lot of the time, his characters are the background characters. Just look at Cabin In The Woods. In the context of The Avengers, this meant that even the dialogue-free SHIELD agent extras got their chance to shine, reacting to Tony Stark's posturing and, at one point, playing Galaga on one of the Helicarrier's display screens when they were meant to be working. But while I always enjoy efforts to give personality to background extras, I'm still not wild about the whole jumpsuit/catsuit thing. Jumpsuits are near-universal in sci-fi/superhero movies, and the current zeitgeist (X-Men; Star Trek 2009; Prometheus) is for the slightly more flattering option of figure-hugging bodysuits with concealed structure and muscle padding. They look more like diving wetsuits than the spandex costumes we know from Adam West's Batman, and even musclebound types like Chris Evans get to have a little shoulderpad action going on.
It's all well and good for the crew of fit 30-somethings on the Helicarrier be kitted out in catsuits every day, but even if people in real life were as uniformly slim and well-muscled as the average SHIELD agent appears to be, I still doubt they'd be entirely comfortable about wearing that to work every day. Particularly if their entire job is to sit in front of a computer screen and zap any pigeons that look like they might be getting near to one of the Helicarrier's rotor blades. The best reason I can think of for the ubiquity of pointless jumpsuit-wearing is that it helps to normalise the costumes worn by the superheroes themselves. Captain America's and Black Widow's skin-tight outfits -- both manufactured by SHIELD -- bear more than a passing resemblance to the SHIELD uniform jumpsuits.
Oh, and a postscript: The interior of the Helicarrier cracks me up, a little. It looks so shiny and awesome, but I'm not convinced that it was such a great decision to have smooth floors and no barriers on the raised walkways... on a ship that spends half the time flying and half the time in the water, and is equipped for mobile combat. How many times a day do you think people slip over and brain themselves on one of the consoles? Seriously, I want to baby-proof the corners of every single one of those Stark Industries display screens.