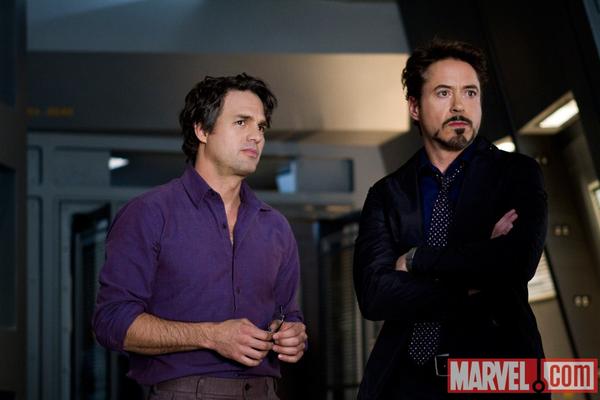 Tony grew up with fame. He might seem careless about his public image, but that's a carelessness borne of long experience with being in the public eye. We know that Tony is a vulnerable, isolated person, but during the scenes in the Iron Man movies when he's either in public or speaking to the press, you can tell that he's just a little more over-the-top than usual. Not to the extent of Bruce Wayne's idiot playboy persona in Batman Begins, but the Tony Stark who we see drinking alone in a lab full of half-finished robots (because Tony Stark has to build friends for himself) is significantly different from the Tony Stark people would read about in the tabloids of the Marvel universe.

The quantity of luxury product placement in the Iron Man movies is testament to the Tony Stark image. Cars, watches, drinks, suits... Tony, like James Bond, is an advertiser's dream character. There was far less of that in The Avengers, though. Mostly we see Tony at home in worn t-shirts (including a Black Sabbath shirt, a nod to the character's love of classic rock) or dressed in a slouchy, non-traditional suit (pictured above) when he's visiting SHIELD in his role as a consultant, the closest we ever see to him being dressed "like an engineer". He's relaxed, he's grounded, and a lot of that is thanks to his relationship with Pepper. 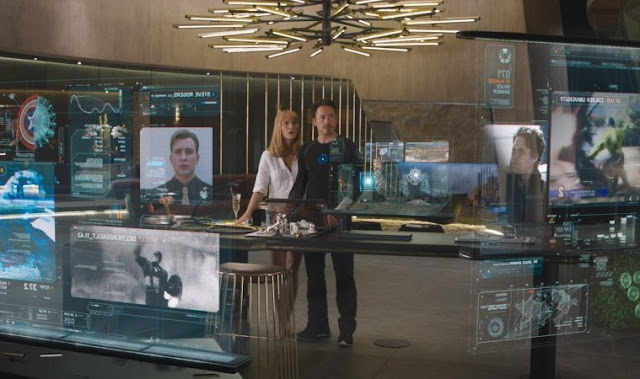 The Tony & Pepper Show is a delightful screwball comedy back-and-forth, and I would happily watch ten more scenes of them flirting around Tony's hideously expensive and uncomfortable-looking cavern of a house. So for me, the Tony-and-Pepper sections of The Avengers were perfect. Without stepping on the toes of any hypothetical post-Iron Man 2, pre-Iron Man 3 Tony/Pepper details, we know immediately that they've finally made the step towards something like a real, adult relationship, and they are both clearly so happy about it. I've already written at length about why Pepper Potts is such a great character and why costuming is a big part of that, so when she first showed up in Avengers my reaction was basically: LEAVE ME TO DIE BECAUSE PEPPER IS RELAXED AND HAPPY AND IS WANDERING AROUND TONY'S BACHELOR PAD WITH HER SHOES OFF. Note to my family: I would prefer an ocean burial.

I've actually seen quite a few fan reviews that commented on the fact that Pepper's not wearing shoes in her scenes with Tony. Theories include: Joss Whedon's foot fetish; the product placement deal with Louboutin fell through and Pepper simply couldn't wear anything else; Gwyneth Paltrow was injured; they were sick of making Robert Downey Jr stand on a box in every single scene. For me that last theory is a no-go because he's clearly wearing lifts all the time anyway, as you can tell from the mysteriously inflexible hidden-heel sneakers he wears in every scene. Of course, most people aren't on RDJ height-watch like I am. (It's just that once you notice you just can't stop. Because seriously, he's like 5'8" at most and there are multiple scenes where he is supposedly nose-to-nose with Chris Evans, who is definitely over six feet tall in his Captain America booties.) 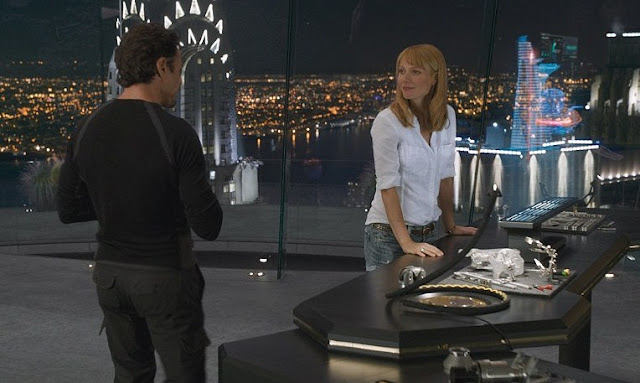 I think that Pepper's shoelessness is purely a character choice. Up until now she's been the one insisting on professional boundaries between Tony and herself, not just because they both have huge, messy feelings for each other but also because Tony used to be such a relentlessly irresponsible man-child that if you gave him an inch, he'd take a mile. The 4-inch stilettos she wears throughout the Iron Man prequels are part of her business armour, the clothes that force people to look up to her both figuratively and literally. (Which must have been annoying for the filmmakers who had to create the illusion that RDJ was now six inches taller, as opposed to just two or three.) The fact that she feels comfortable enough to slob around his house in jeans-shorts is proof that Tony's finally grown up enough to receive Pepper's stamp of approval. Oh, and she's CEO now so he's totally not even her boss any more. 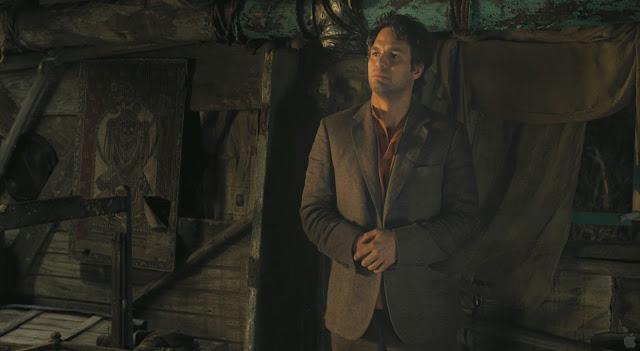 Bruce and Tony are the only two Avengers who, upon first meeting, actually like each other or have anything in common. Tony is a man so desperate for people to talk to on his own intellectual level that he built himself a sentient house for company. Bruce is an academic who had to abandon his research and go on the run, alone. Everyone who meets either them has already pre-judged them from prior knowledge of their mistakes and disasters. And even after they've got to know each other, Tony is still the only character in the movie who doesn't treat Bruce with trepidation and distance -- partly because Tony is still kind of self-destructive and enjoys poking at things and/or people until they blow up, but also because Tony is the only one who really understands Bruce as a person (as opposed to "that guy who sometimes turns into an unstoppable killing machine"). And he's the only one who trusts that Bruce will show up to help the other Avengers fight, the result being the Hulk's first moment of altruism: saving Tony's life. 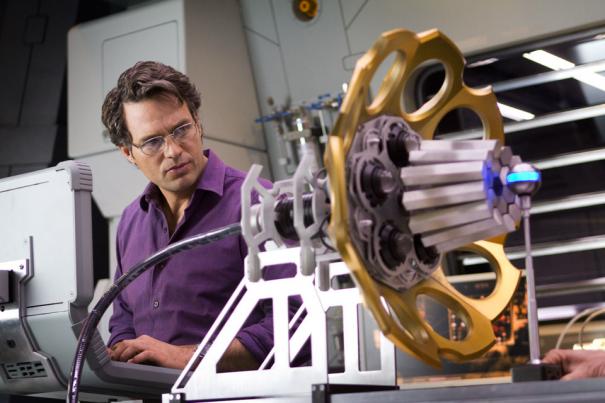 Unlike the rest of the Avengers, Bruce Banner's costumes are not really showy or flattering. He doesn't even get a superhero outfit. Bruce is middle-aged, he's kind of a mess, and Mark Ruffalo is the only actor in the main cast who wasn't on a strict diet and workout regime. So physically, Bruce is not a fighter or an athlete, and in terms of his everyday look the costume designers were intentionally avoiding the alpha male appearance of, say, Steve Rogers. When Bruce first appears he's in a wrinkled, dirty suit, and after that we get the purple button-down shirt -- a reference to the Hulk's famous purple shorts. I'm rather forlorn about the shorts thing because I was SO HOPING for a scene where Tony engineers him a pair of stretchy polymer-whatever panties for when he Hulks out. Maybe in Avengers 2?
Looking at Tony and Bruce's outfits at the end of the movie, I'm just gonna put this out there: Bruce is wearing Tony's clothes. They're about the same size and build, Bruce' outfit is way snazzier than his usual style, and we already know that Tony practically asked Bruce to move in with him the day they met. Tony loaned him an outfit from his no-doubt gargantuan Stark closet because they're Science Bros now, plus Bruce's only other clothes were reduced to a pair of torn short-shorts when he Hulked out. Also, Tony knows that this is Bruce's first (positive) interaction with the press, and if there's anything Tony Stark's good at, it's putting on a show.

Now, I know we don't see any paparazzi or TV crews in that final scene, but a) the Avengers are now world-famous for saving New York from certain doom, and b) for the first time in the movie, Tony is wearing his Billionaire Playboy Philanthropist duds. The only possible explanation I can think of for this scene is that it takes place specifically for the public. I mean, they're transporting an alien war criminal to another planet from Central Park. If they'd wanted to keep things safe and secret then they'd have done it from somewhere in the bowels of one a SHIELD base. My guess is that the (weirdly deserted) place where the Avengers stand to bid farewell to Thor and Loki is in fact a carefully guarded area with the press roped off somewhere in the direction of us/the audience/the camera. We view the scene from the perspective of "the crowds", who are there to verify and report on the fact that Loki is definitively gone for good. Because there is just no other way I can interpret the decision to film that scene in such an incredibly public area.

Product Placement in The Avengers.

This photo of Robert Downey Jr in shoe lifts (I think for one of the Iron Man movies).

My weird fixation with the relative heights of the Avengers cast was already pretty awful, but while I was writing this post I got stuck in a google-vortex and ended up at this actor-height related review of Mission Impossible: Ghost Protocol, which is more or less diamond-hard proof that every single actor in Hollywood is standing on a box and/or in a trench at some point during every movie.
Posted by Hello, Tailor at 14:47