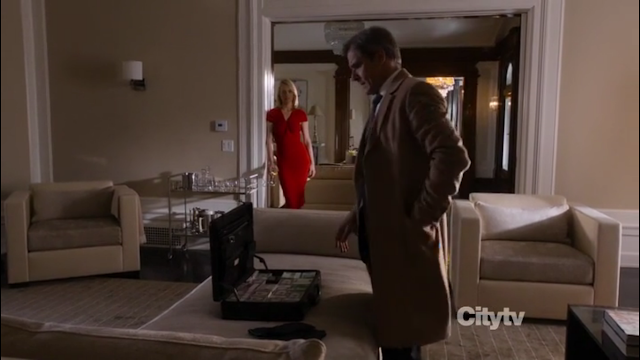 The costumes of Revenge aren't bad, but the nature of the setting means that nearly every character is dressed in a very perfect, studied and formulaic manner. Conrad Grayson is always in a somber, expensive suit; the younger men mostly wear relaxed everyman clothes; the women are dressed up but never ostentatiously so. Women on TV tend to be more put-together than women in real life, but in the case of Revenge we have a whole host of female characters who only ever remove their high heels to put on a negligee, and wear makeup 24 hours a day. In the dog-eat-dog world of being an evil trophy wife in the Hamptons, image is everything, and characters like Victoria Grayson and Lydia are rarely seen out of their uniform of tight, knee-length dresses. 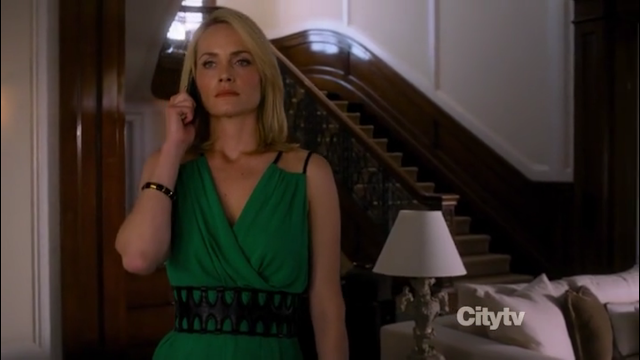 Victoria is the most uniform dresser of them all. I don't think I've ever seen her wear anything that isn't a skin-tight dress plus high heels in the entire course of the show. Victoria's style is so immediately recognisable that I've noticed that Madeleine Stowe (the actress who plays her) tends to show up to Revenge publicity shoots wearing exactly the same kind of super-tight bandage dresses and lacy cocktail frocks.

Revenge is far less guilty of Male Gaze camerawork than most female-centric drama shows, but when it does come to purposefully sexualised cinematography it's usually Victoria on the receiving end of those shots, not Amanda. It's a pretty good characterisation choice, actually, since Victoria is definitely the vampy seductress of the show whereas Amanda's public persona is far more girl-next-door. 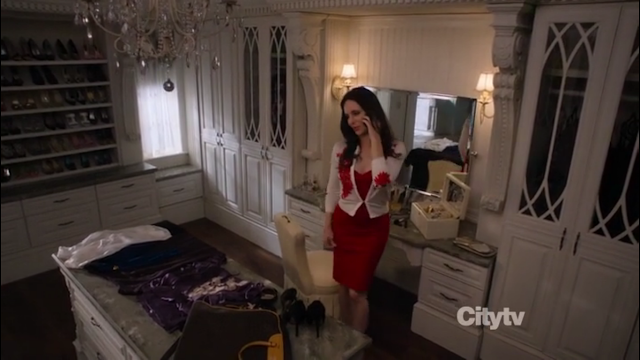 Amanda's costumes are almost all disguises. Everything she owns, wears and does in the Hamptons is tied into her revenge plans rather than expressing her own desires or sense of self. At heart she's a very controlled and practical person, someone who has been stripped back to the bare bones and will now do anything to fulfill her quest for vengeance. To that end, she's created the harmless Emily Thorne persona for the benefit of her Hamptonite enemies, a wolf in sheep's clothing. Once you accept that her appearance can't be judged the same way as most characters', her costumes can be divided into three categories: 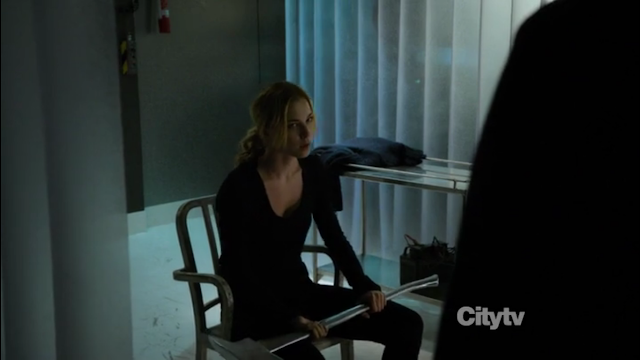 Nothing to do with costume design, but one of the little details I enjoyed about the finale was the motif of boxes and containers. In Revenge, all the Maguffin props are information-carriers. We've got to a point where almost every character has been directly involved in some kind of secret spy-camera or webcam blackmail scandal, and files change hands and swap email accounts with dazzling speed. Once upon a time it was just Nolan's infamous whalecam and Amanda's Infinity Box, but now we have any number of secret files and surveillance tapes. 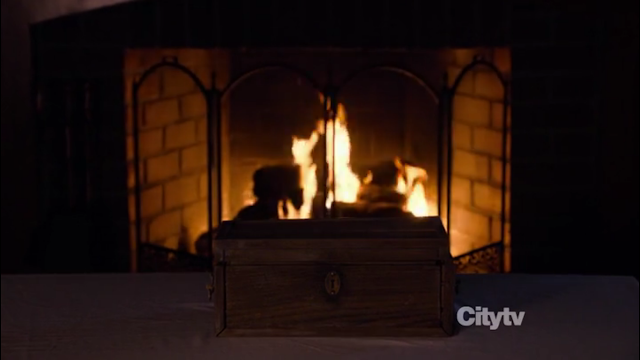 The Infinity Box is this show's one great failing. It's a good prop for scenes where you need your protagonist to stare pensively at something while having childhood flashbacks, but for a character as practical and ruthless as Amanda it seems like a needlessly obvious Achilles heel. I was actually relieved when it first went missing because it's such a clunker of a clue pointing directly to every one of Amanda's well-planned deceptions. The fact that she's still got it now is rather frustrating.
And then at the opposite end of the spectrum, there's Victoria's gift box to Amanda. This scene filled me with pure glee because it was such a perfect example of Victoria purposefully orchestrating a moment of theatrical cruelty, purely for her own vicious entertainment. And the thing is? Amanda respects that. She even smiles a little when she opens the box, impressed by Victoria's panache -- and glad that Victoria is no longer her future mother-in-law. In a show full of these staged moments of retribution and public humiliation, this was right up there with Victoria holding Lydia close and whispering in her ear, "Every time I smile at you across the room or we run into each other at a luncheon or I welcome you into my home? Let that smile be a reminder of just how much I despise you. And every time I hug you? The warmth you feel is my hatred burning through." I mean, WHO TALKS LIKE THAT? Only Graysons.
The relationship between Amanda and Nolan is my favourite thing about Revenge. This show does a lot of interesting things with gender roles, beginning with the fact that the protagonist is a woman who, for all intents and purposes, is Batman. One thing I particularly love about Amanda is that unlike most female spy/deceiver characters, she doesn't rely on sex appeal and seducing information out of people. Although she uses her relationship with with Daniel as an integral part of her revenge plans, it's an actual relationship, not a collection of scenes where the camera pans over her wearing a sexy outfit before cutting to some man's comically gobsmacked facial expression. To me it feels quite telling that although the female characters in Revenge are mostly trophy wives (or, in the case of Fauxmanda, a former stripper), they are judged far more on their own terms than most female characters on TV.

With Nolan and Amanda, you have this brilliant relationship where Nolan is basically her henchman, but also is the one person who knows her secrets. On paper, it seems like he should have been more of a mentor figure to her -- he's older, he was friends with her father, he's her key to the Hamptons -- but instead he's very clearly in the sidekick role. Also, Nolan is the only character in the show who isn't desperate for control, either of his life or the world around him. There's this almost submissive side to his personality that means he's perfectly happy to look to Amanda for direction and take genuine pleasure in her success.
This kind of open, one-sided admiration between main characters is vanishingly rare, particularly when it's a man's (apparently) platonic admiration for a woman. In a less nuanced show, Nolan's loyalty would be written off as a poorly-socialised nerd with a crush on a hot, powerful woman. Rarer still is the fact that every moment of that admiration is tied to her actions and not her appearance. At first he was desperate to be let into her revenge plans, and now he's earned her trust he's openly gleeful about getting to watch her take people down. Although he clearly has a skillset far outside the reach of any other character on the show (those handy hacking skills...) it's also obvious that he couldn't have done any of the things Amanda continues to do. She's got an excellent strategic mind, she's ruthless, and she doesn't back down from a fight. Nolan, on the other hand, literally cowers away from physical confrontation. Gabriel Mann's ability to bend his 14ft limbs into various poses of snivelling terror is both impressive and entertaining. 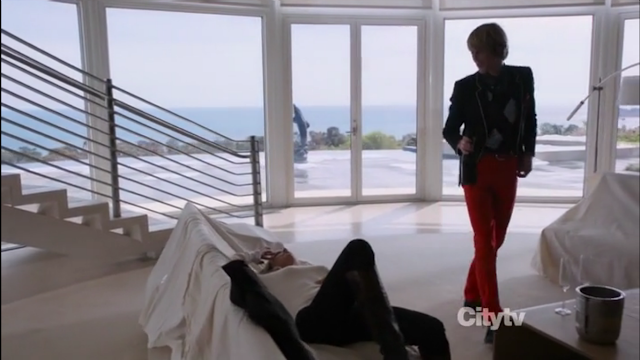 This episode saw several excellent Nolan outfits. First, the vulnerable white t-shirt, checked trousers and pink/lilac shoes and socks of the kidnap scene. Another wonderful example of gender role reveral in Revenge, because in most TV and movie scenarios where a woman is kidnapped and tied up, she's at least partially stripped to highlight her vulnerability. Buffy and Angel are the only shows I can think of that objectify men in the same way as women in that type of setting, and although I wouldn't say this scene was sexualised, I appreciated the fact that Nolan was the weak one (as always) while Amanda was still tough and fully-dressed in her Batmanda outfit. 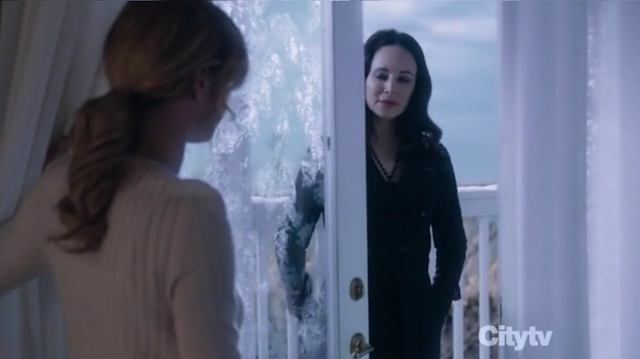 I almost punched the air in excitement during this moment of over-the-top visual symbolism. Victoria and Amanda, meeting for the last time on opposite sides of an ice-covered door! Amanda, dressed casually and all in white, comfortable in the knowledge that she's finally getting the revenge she desires! Victoria, dressed all in black like the archetypal Evil Queen she is, looking more like Morticia Addams than she ever has before! Delicious. 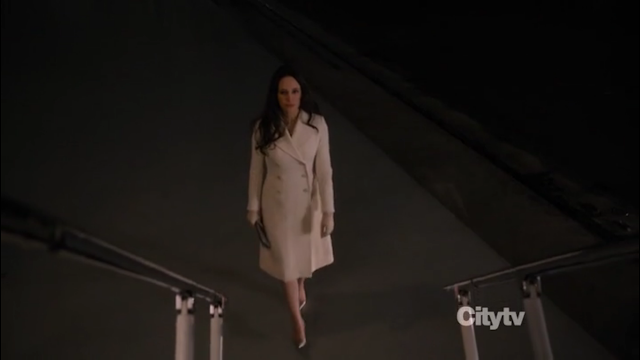 The closing montage was stunning. Victoria, wearing pure, innocent white from head to toe, absolving herself of her sins (as, she said to Charlotte earlier in the episode, the only way to cope with your own acts of cruelty and retribution is to forgive yourself and move on) and stepping up the heaven-like staircase to the airplane. Of course, being regular viewers of Revenge, we already suspected that the plane would crash, but on the other hand... as a regular Revenge viewer, I also suspect that Victoria survived that crash.

I didn't used to be a Florence + The Machine listener, but thanks to the excellent usage of Seven Devils in this scene (plus the Snow White & The Huntsman trailer), my current playlists are becoming dangerously Florence-adjacent.