Agnès B.
I'm impressed that this is even possible, but: Agnès B. managed to create a denim miniskirt -- in a menswear collection, even -- that looks at least semi-dignified. Aside from the ankle-socks over the tights, this outfit is perfect casualwear. 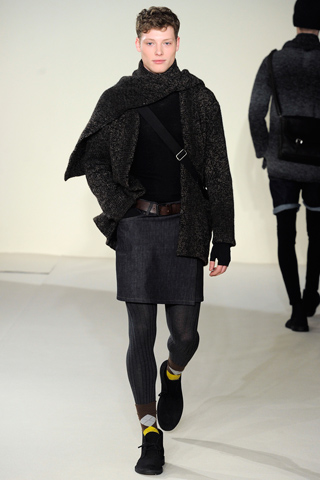 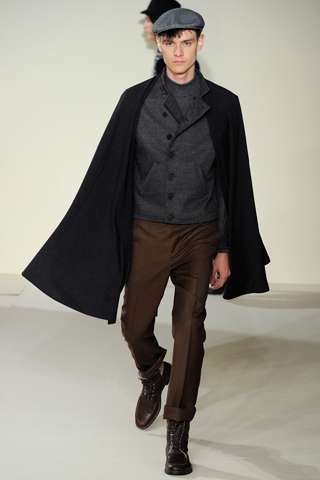 What's that, more tweedy knee-breeches? I'm never going to say no to those. Also, the dark grey ribbed tights are a really good choice for a menswear line, I think. Knee-socks would look schoolboyish, but sheer/nylon tights are irrevocably feminine. The ribbed tights are an excellent compromise. 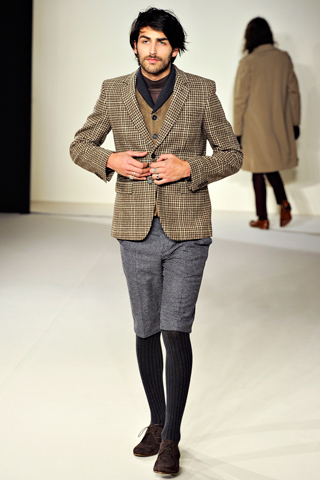 Damir Doma
Damir Doma gets extra points for playing with draping without resorting to "reinventing the trad suit", which -- imagine me shuddering dramatically at this point -- seldom works out. Take heed, first-year design students. 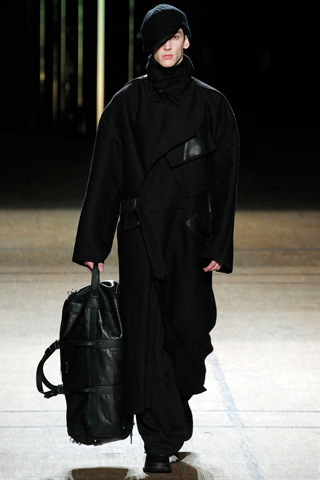 The jackets and coats seemed to be very Asian-influenced, and there was a conspicious lack of buttons. Dior
Ostensibly themed around classic sportswear, most of this show resembled olive-green iterations of the officer uniforms worn by all the stressy Empire guys Darth Vader used as chew-toys on the Death Star. Close to the end of the show this white bird motif began to show up, however, and it immediately caught my interest. Thanks to the subtlety of the white/grey illustration it almost looks abstract, especially on the items with more than a few birds, such as the trousers in this outfit. 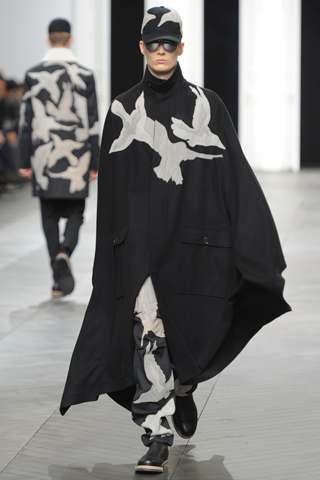 Lanvin
I'm posting this jacket because it's one of the very, very few examples of this exaggerated shoulder-silhouette that I've actually liked. It's just a shade short of cartoonish, and the smooth curve down to the waist and hips stop the too-large shoulders from looking as strange and disproportionate as most of the womenswear jackets I've seen in this style. 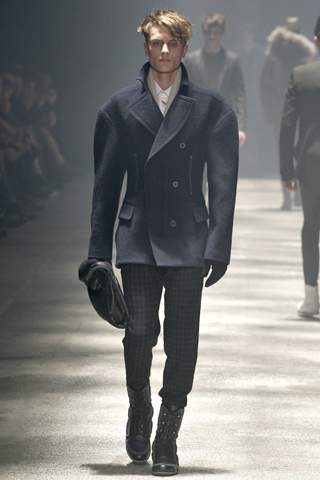 These boots are what Marty McFly thought we'd all be wearing in 2012, I think. 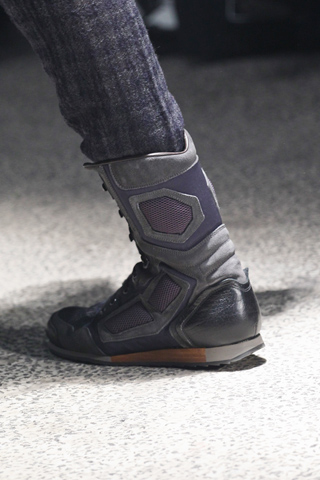 Miharayasuhiro
Superficially this outfit looks like it shouldn't be in this post, for two pretty obvious reasons: it's womenswear, and it doesn't really... look particularly interesting. However, given a little backstory, it's cooler than you might think. 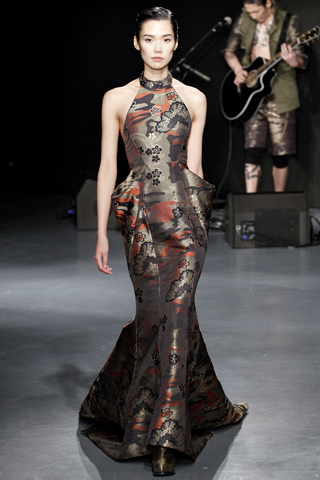 Miharayasuhiro threw a couple of womenswear outfits into the middle of his menswear show, just for funsies I guess, but they fit impeccably thanks to the interlocking themes of delicate kimono fabric and staunchly masculine military uniforms/outerwear. Here he took a rather generic evening-gown silhouette but livened it up with traditionally-woven kimono silk that melds camouflage patterns and floral embroidery so the orange and brown shapes of the camo almost look like the clouds of a Japanese watercolour painting.
Thom Browne
BE STILL. MY HEART. It's rare that one sees a show so gloriously unwearable, and I include Walter Van Beirendonck in that estimation. There are so many different things to marvel at here that I hardly know where to begin. 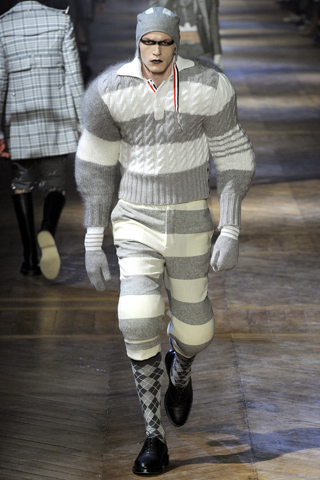 American football parody seems like a good layer to begin with: obvious, and not particularly difficult to achieve since it mostly requires a huge superfluity of shoulders and a helmet, at which point anyone with any exposure to US pop-culture will probably see what you're getting at. Sports references are far from rare in menswear collections, and I'm sure that the football armour thing has been done many times before. But Thom Browne has taken it to a ridiculous degree here, padding out false muscles and joints until the models looked like Popeye.

This whole colour scheme + knitted trousers = just as unwearable as the inflatable football outfits, even though it technically falls into the category of "normal clothes". Individually one might see someone wearing the scarf, the cardigan, or even the midriff-exposing under-cardigan, but the combination of all three would be a rare event. 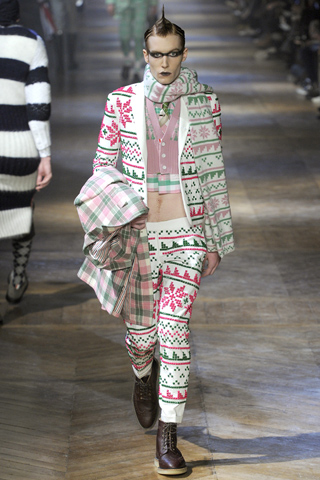 There's something quite mesmerising about this show because it's so off-the-wall but at the same time lacking in coherency. Your eyes rebel, but what's the meaning behind what you're looking at? Why combine toothpaste-hued tartan, metal spikes, pink man-skirts and full-face balaklavas all in one outfit? If there was some way to combine the extreme, aimless creativity of this show with the kind of subtle thematic work (ie, not, "this collection was inspired by the ocean!") found in the Miharayasuhiro collection then you'd have my perfect fashion show. Thom Browne's padded-out football jocks were apparently a nod to The Incredibles, but aside from that it's difficult for me to divine. 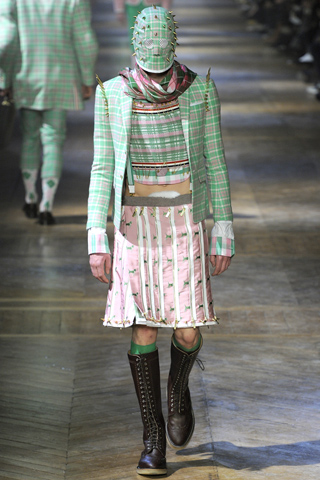 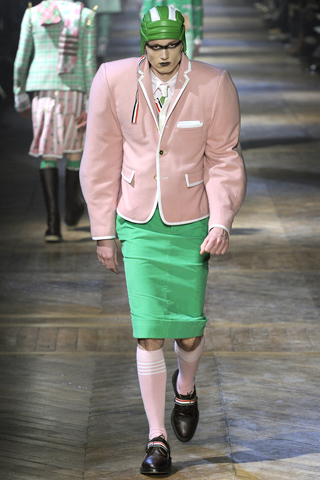 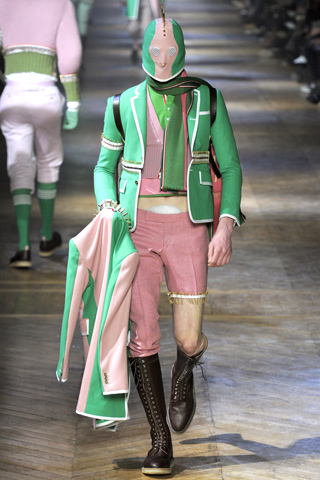 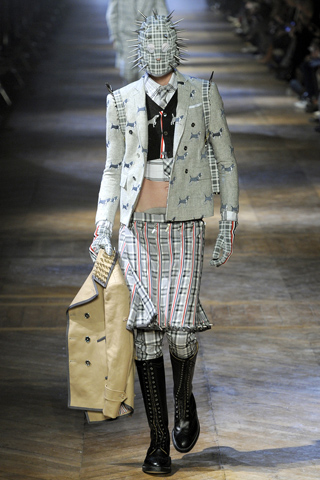 Just in cast the animal print (as in, print of animals, not... "animal print"), spikes, balaklava/fetish mask, belly shirt or fur jacket distract you in this last picture, may I draw your attention... down and to the middle. Yes, that is a merkin poking cheekily out from this gentleman's trousers. And there were others. One of the other models had a white fur one. I'm certain that this trend will catch on like wildfire. 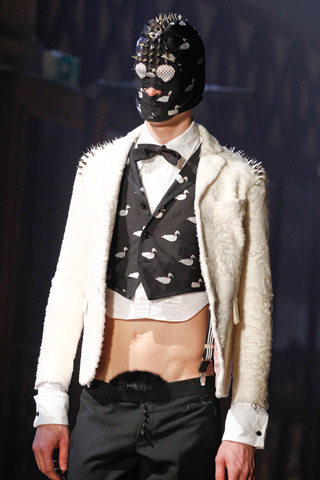