Calvin Klein
Calvin Klein is my fashion nemesis. The label is a household name and yet his actual catwalk shows have, for the past few years, been entirely focused on showcasing some of the least interesting clothes in the history of ever. So this season my low standards were more than satisfied to see two whole dresses that didn't make me languish into a coma. 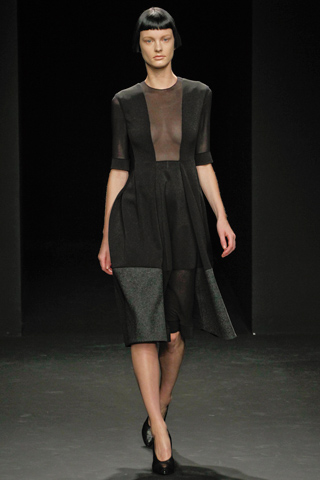 The seemingly-inappropriate juxtaposition of suit fabrics, conservative necklines/hem lengths, restrictive metal belts and breast-bearing sheer chestpieces was a welcome change from Calvin Klein's Spring 2012 collection, which as I recall consisted of around 50 near-identical beige shift dresses. 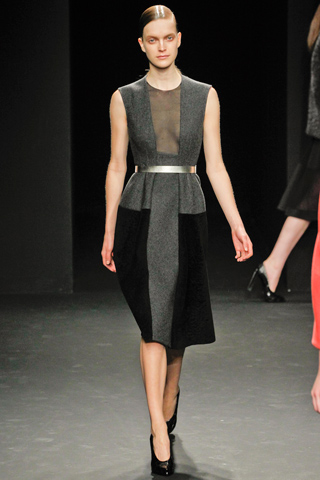 Aquascutum
A relatively severe collection of neutral-toned businesswear, the most notable thing being the contrast between inner and outer layering. The cutouts on the jackets exposed shirts and collars to the world, and unusually for a womenswear collection there was a lot of emphasis on visible cuffs shot out at the wrists. 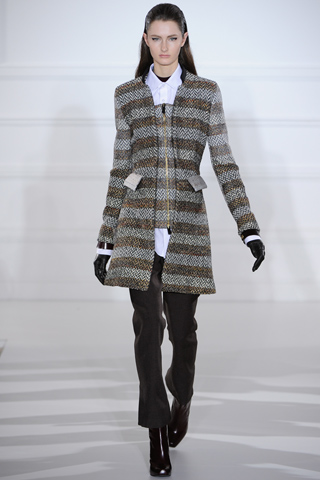 Carolina Herrera
Is this silhouette awesome, or what? I love the cropped jackets and full skirts -- very Michelle Obama -- but am a little doubtful as to their application in real life. It's a very serious look: almost businesswear on top, and formal ballgown on the bottom half, and not an inch of limb on display anywhere. Plus full skirts aren't really appropriate for a lot of situations, for example any time you go anywhere where there is rain, or stairs. 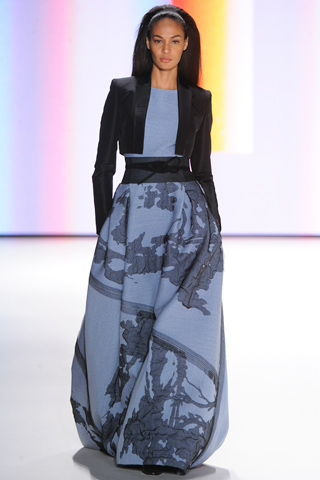 Christian Cota
There's something very plantlike about this outfit: petal-shaped skirt, and a colour palette of drying desert flowers. As far as I can tell about Christian Cota (I'm pretty new to his work) his typical fare is far more conventional, and this Mexico-inspired collection seems like a real step in the direction of innovation. 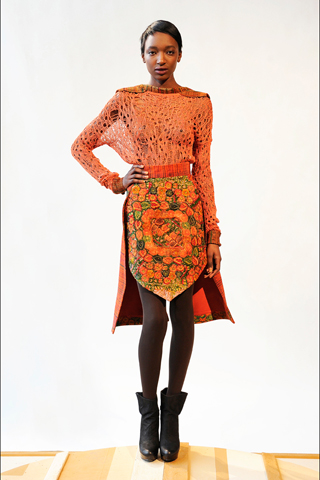 "Luxury" and "poncho" are not really two words that call out to one another, but I can't think of any other way to describe this. Too bad you'd pretty much be barred from doing anything if you were wearing this, unless you're the kind of magical being who can wear three yards of red fur around your wrists and not dunk any of it in your cereal. 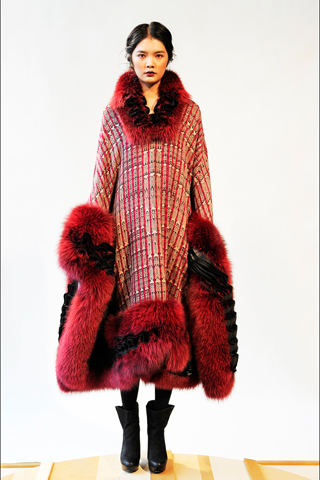 Proenza Schouler
The strange, belt-like skirts and rigid buttonless shirts came to us by way of karate outfits. The martial arts theme wasn't strictly literal, but the stiff fabrics and lacquered/leathery woven mat-fabrics gave the impression of protective padding. 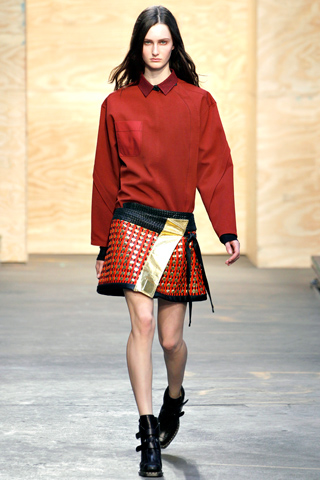 I'm a big fan both of the assymetry and the adjustable nature of the belts, which look like they could be worn either on the hips or the waist. 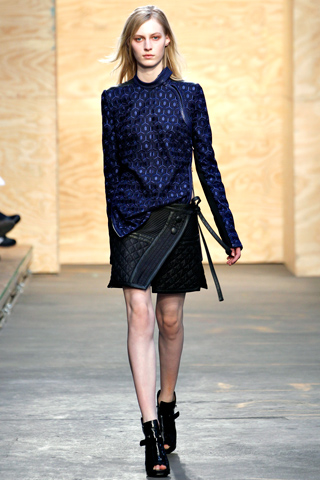 I give Proenza Schouler a lot of points for these skirts. They're far from the typical variations on staple items like the pencil or A-line skirt, but they still give every appearance of being fairly wearable, albeit short. A skirt like this, worn with even the plainest of outfits, would look incredibly stylish and cutting-edge. I don't think I've ever seen this technique (woven strips of leather) before, either. 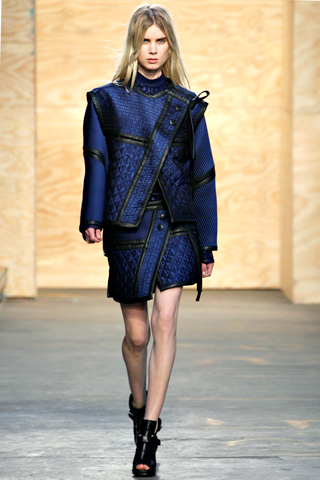 Can I say just HOW MUCH I predictably love these super-short kimono silk outfits? They're terribly sharp, and combine so many great tastes that I didn't expect to taste great together! 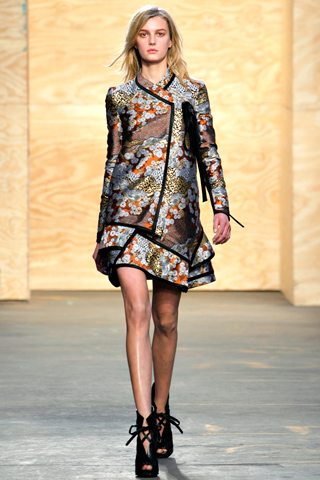 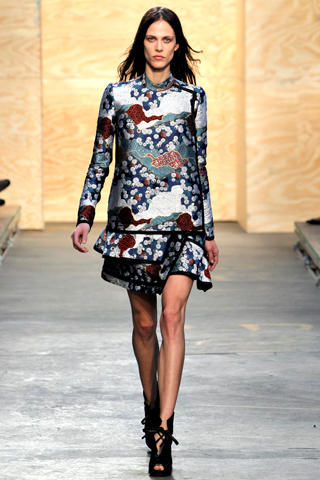 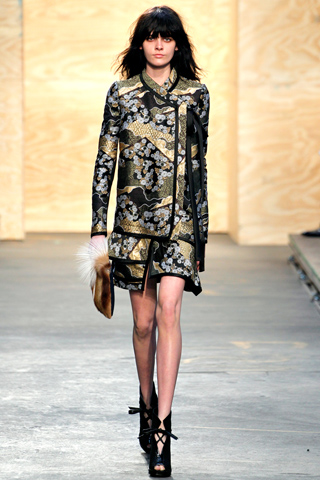 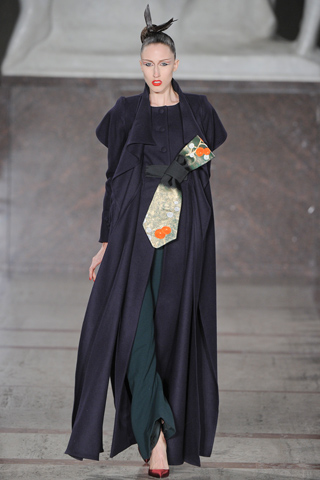 Unfortunately they'd gone for this hair/makeup styling that seemed intended to... make the non-Asian models look Asian. Occasionally I see this done for so-called "Asian-themed" photoshoots in Vogue, Elle, etc and it never fails to make me feel uncomfortable. Why don't you just... hire an Asian model? 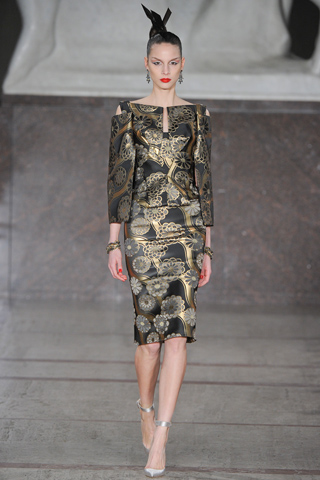