Givenchy
The title of this show was The American Dream, but before I learned that I assumed it was more of an American sports theme than anything so metaphysical. The striped shirts were close relatives of the rugby jersey, and the skirts reminded me of cheerleading skirts thanks to the star patterns. "Leather sweatshirt" isn't really a look that works in real life, but by and large I approve of this show since it avoided the obvious red-white-and-blue stereotyping of a typical USA-themed collection. As is typical, the skirts were balanced out by heavily masculine touches over the rest of the outfits -- clumpy shoes, bullish nose-rings (inspired by the Minotaur, because apparently that's a thing that people are inspired by), hints of sportswear, and a lack of close tailoring. The concept of designers feeling the need to compensate for skirts in menswear collections is one that I find irritating, but easy enough to understand.
The progress of man-skirts from the far outer reaches of high-end menswear to everyday high street fashion is slow-going, but I'm heartened to see more of them on the runways every year. The stigma of wrapping some cloth around your waist is idiotic -- especially since skirts or kilts can often be more flattering than trousers to certain body types. 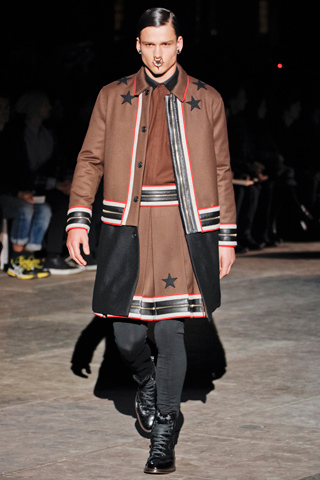 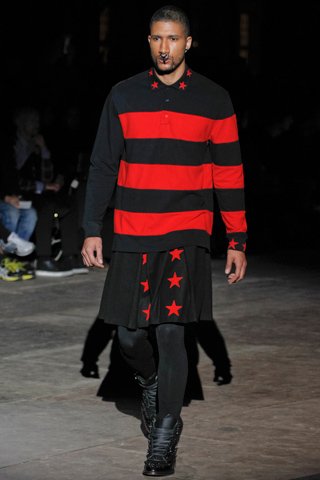 John Galliano
Galliano is dead, long live Galliano. John himself is off being rehabilitated from his drunk/racist ranting ways, and the new boss seems to be taking pains to distance himself from Galliano cliche -- a canny decision on his part, for both marketing and stylistic reasons. The label's previous reliance on creating clothes that look exactly like Galliano's own wardrobe (and frequently styling their models to look like the man himself) isn't going to cut it now he's been shunned by the fashion world, so a new direction was needed. The campy nature of many of the looks in this collection stayed true to the Galliano ethos (Fashion ethos, that is. Not, you know, the other one.) without the need to trot out thirty Galliano clones. 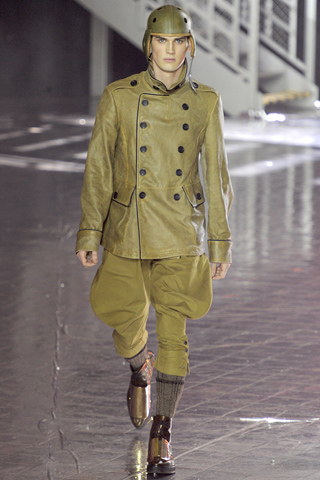 This collection had strong 1930s influences, in particular from the illustrator J. C. Leyendecker (about whom you can read here on Hello, Tailor). The metal-plated shoes were reminiscent of armour, but aside from that the '30s looks ran strong -- gangster suits, wide-legged trousers, and military looks such as the jodhpur outfit pictured above. 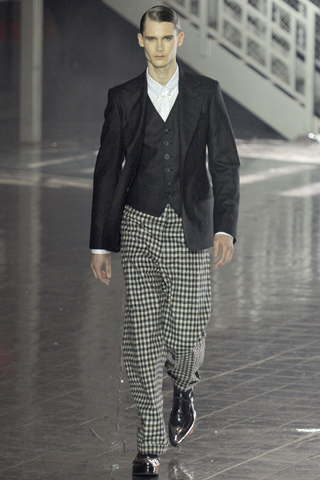 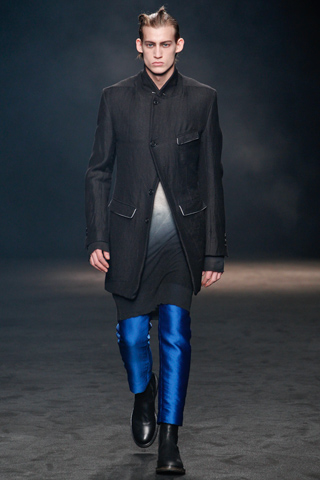 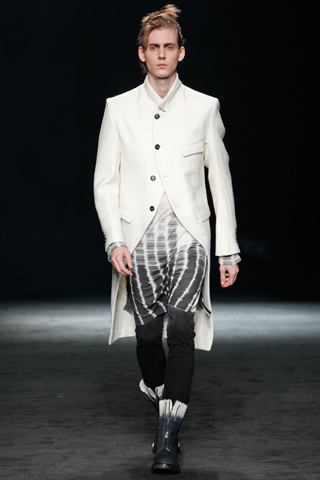 Berluti
It's hardly groundbreaking suit design, but I had to post some of this collection since the photoshoot was so oppressively Edward Cullenesque. Lots of pale, beautiful men wearing exquisite yet rather melodramatic dark suits, posing against what looks like the backdrop of a high school drama department. 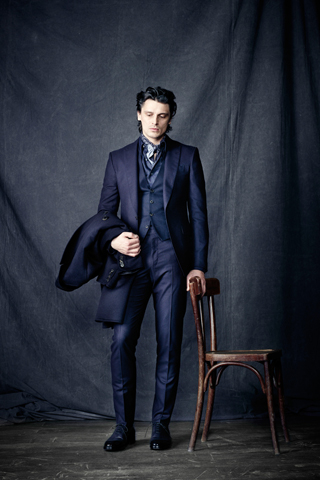 This purple suit would probably look cheesy and awful on most people, but thanks to the fact that it's being modeled by a menacing-looking guy who resembles Lex Luthor's psychotic dad from Smallville, it demands your  attention. 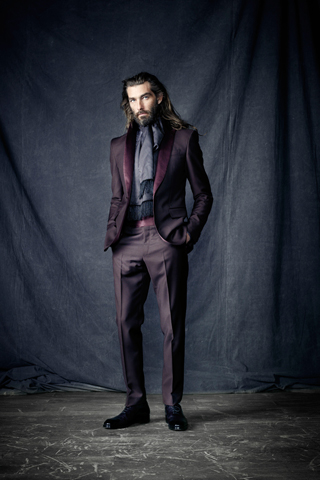 And finally, a guy who looks like a Madonna video's idea of a mafia kingpin. 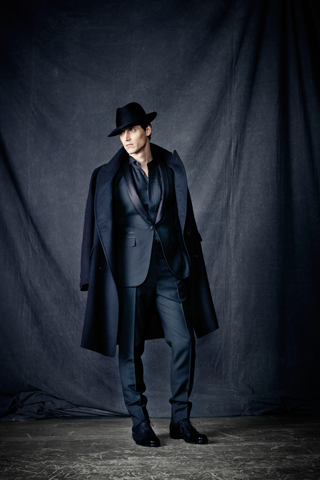 Comme des Garçons
Supposedly this collection was meant to look like the New York Dolls (plus Robert Smith/Joan Jett hair) but I felt it was far more Japanese thanks to faux-Victoriana streetstyle outfits such as the one below, and the overall look of urban subculture androgyny. 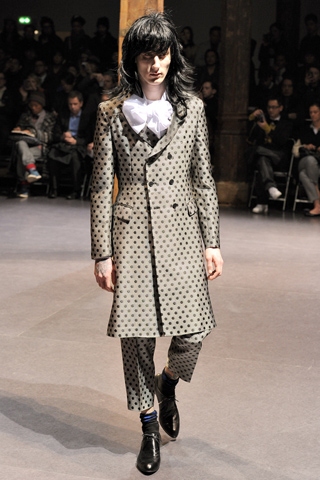 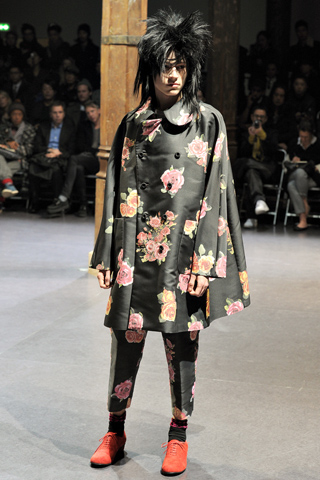 There were several of these slouchy black/slate outfits, and all of them reminded me of that particular Japanese style that's made up of monochromatic layers of wrinkled shirts and sweaters. I'm not very well-informed with regards to the vast family tree of Harajuku-rooted fashion sub-sub-subcultures, but I'm sure I've seen this one around. 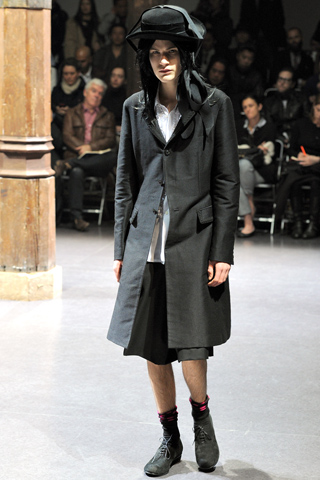 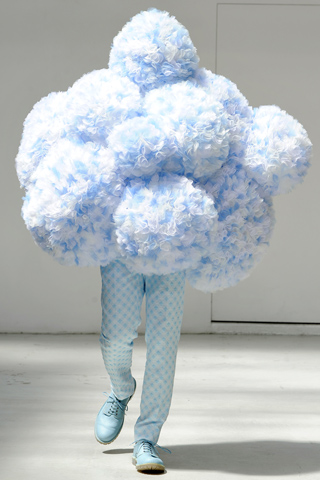 Oh yeah. And that wasn't a one-off. He did a whole bunch of those outfits, in different shapes and colours. It was like Half Man, Half Ice-Cream Scoop. However, like any designer worth their salt, Mr van Beirendonck has made sure to develop his look this season, specifically taking his checked suits to the next level by... 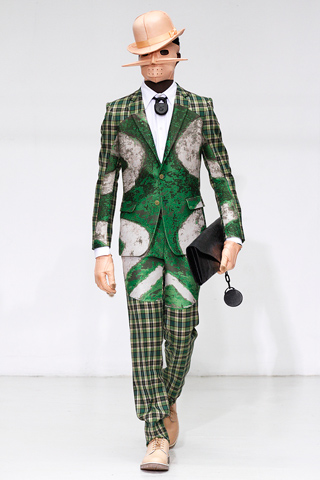 ...that. A selection of innocent "baby's bedroom wallpaper" colour-schemes combined with fetishwear accents such as neck padlocks and... pastel-coloured gimp masks with either huge septum piercings or stylised moustaches. 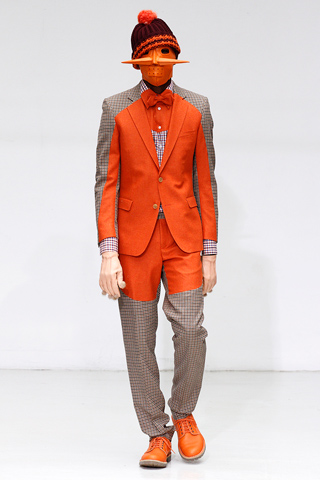 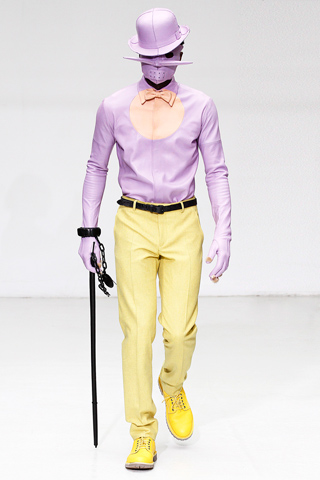 Pale-pink thigh-highs and a matching pleather shirt -- what every man wants! Honestly I would love to know who wears van Beirendonck designs -- certainly not the designer himself, who comes out at the end of each show sporting jeans, sneakers, and a luxuriant grey beard. 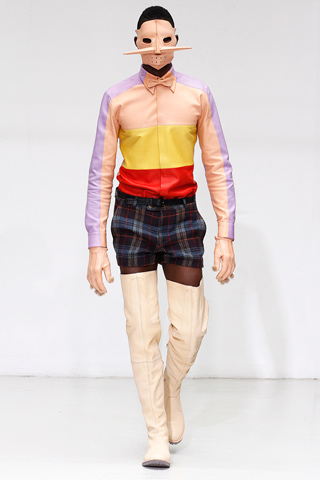 I'm not even sure what's going on with this last one, but the jacket looks like it'd take about half an hour to get into. Either that, or it's actually a wearable inflatable life-raft with built-in insulating fur blankets for cold-weather trips.