I love Sherlock Holmes. Not just the new adaptations where Robert Downey Jr and Jude Law slap-fight in 14 layers of tweed and drive a steampunk rocketship into Benjamin Disraeli (or whatever pseudo-Victorian thing it is this year). Those movies are great and everything, but I also like to read the books. In fact, once I made a timeline bookmark for my Complete Sherlock Holmes so I could read them in chronological order from "GLOR: 1875" (The Adventure Of The Gloria Scott) to "LAST: 1914" (His Last Bow). Simply put, the reason why there's less plot/characterisation analysis than usual in this post is because if I started I wouldn't be able to stop. I'd just hulk out into an ultimate Sherlock nerd and start word-vomiting a treatise on why Mycroft's cigarette choices indicate that he and Sherlock were neglected as children.
The costumes of Sherlock are, to be honest, not hugely exciting. In the first series they establish Sherlock Holmes in a uniform of dark, expensive designer menswear, and John Watson in a selection of porridge-coloured jumpers and dumpy cardigans apparently chosen to make him look as nondescript as possible. You could probably knit John and Sarah Lund from The Killing together into some kind of BBC crime-drama knitwear Megazord.

Because of the way Sherlock works, there's not much hidden meaning in any of the costumes. Everything important will be deduced by Sherlock right there onscreen anyway, so whilen in another show there might be some subtextual characterisation hint hidden in a character's dress-sense, in Sherlock you get a direct explanation from the protagonist as to why someone's cufflinks prove them to be an adulterer. Which isn't to say that I dislike the costumes -- what's not to love about Sherlock's wardrobe of skin-tight D&G shirts and his deliciously swoopy, red-buttonholed greatcoat? -- but there's not much depth to plumb.

A Scandal In Belgravia: the great wallpaper conspiracy. (Oh yeah.)

A Scandal In Belgravia = 90 minutes of pure glee, give or take a few moments of "WTFeminism, Steven Moffat?" Right now reviewers and participants in internet fandom appear to be locked in an ouroboros-like debate over whether Irene Adler makes sense as a character in a 21st century context and whether or not the showrunners really meant to imply feelings of attraction between an asexual man and a woman who self-identifies as gay. However, having spent several days mulling that over, I've now moved onto the real focus of the show: WALLPAPER. 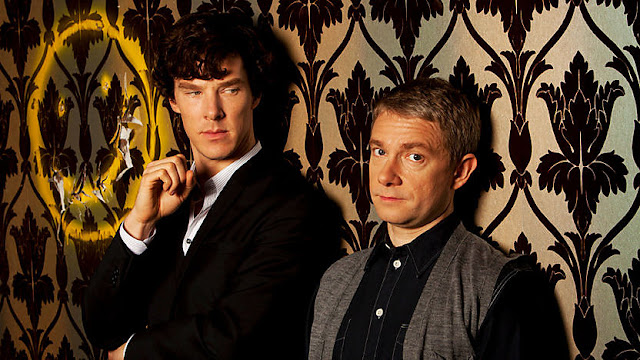 This promo picture is spot-on. Sherlock looking creepy and narrow-eyed; John looking harmless and wry and dressing like somebody's grandpa; the yellow spray-paint smiley lurking behind Sherlock like the devil on his shoulder. BUT CHECK IT OUT: Wallpaperrrrrr. I know very little about interior decoration but I still think that's some awesome wallpaper. The camera people over at BBC Sherlock love them some twirly curlicue patterns, it seems. 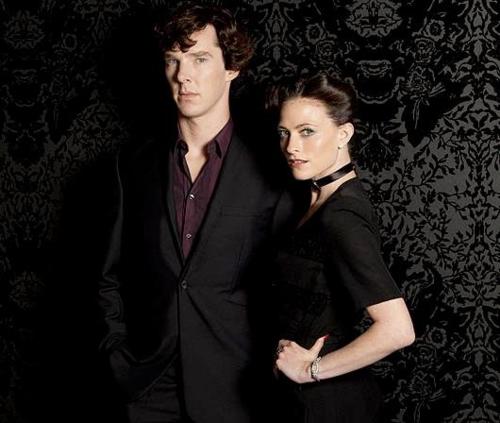 Apparently Irene Adler and Sherlock have quite similar taste in interior decoration. I suspect this wallpaper was chosen because it looks stylish and chic while still retaining that whole busy Victorian aesthetic found in British houses of the original Sherlock Holmes period. Patterned carpets and walls and throw-cushions and horrible little paintings of flowers galore. They occasinoally do that with other things in Sherlock, in fact -- neat little Victorian throwbacks like Sherlock's timeless greatcoat and Irene Adler's bouffant hair. And Mrs Hudson's awesomely Victoriana-esque high-collared blouses:
In Irene Adler's promotional photoshoot they had her practically making out with the wallpaper. Even Mycroft was photographed in front of it, even though I don't think he ever steps into Irene's house. THE WALLPAPER IS JUST THAT IMPORTANT.
I'm pretty sure that the design is by Timorous Beasties, a Glaswegian wallpaper/textile design partnership who make all sorts of slightly weird-looking riffs on classic Victorian pattern work -- the only interior design company I can name, actually, for no reason other than because I live in Glasgow and have walked past their HQ like three times in the past week. I took a gander at their website and Irene's flat seems to be papered in Devil Damask (£228 per roll to you, mate). Timorous Beasties are ideal for Sherlock since they purposefully play off the look of fussy Victorian interiors but add darkness and modernity to their designs by incorporating images like bugs and decaying Glaswegian tower-blocks into the patterns.

Elsewhere in Irene's melodramatic yet stylish boudoir we have matching curtains: 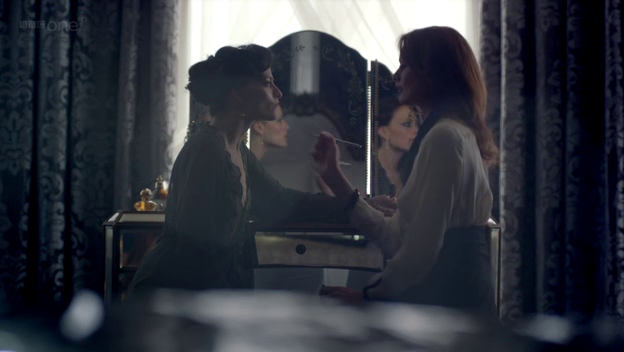 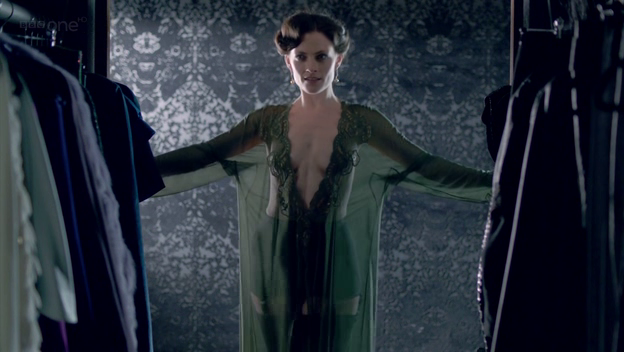 The downstairs of Irene's hopelessly palacial London house is done up in gold paper of a similar but slightly more conventional style. Meanwhile, Sherlock is wrapped in another one of his sprayed-on tailored skinny shirts: 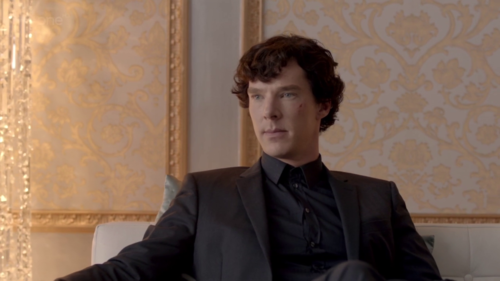 Draw your own conclusions, Internet. What is the meaning of the Great Wallpaper Conspiracy? Is it merely that the person who does set design for BBC Sherlock has a share in Timorous Beasties? Is it a throwback to the Victorian aesthetic? Or have you, like me, stopped thinking about Sherlock and started thinking about how awesome it is when clothes look like upholstery? Hmm, I wonder whether I should try and find some Sherlock-esque wallpaper print for my next pair of Shakespearean knee-breeches... after all, one can never have too many.
Finally: The makers of Sherlock were evidently so keen to get their money's worth out of Irene Adler's boudoir wallpaper that they even included it in the background of her website:
Postscript: I may be quite a big Holmes fan, but compared to some Sherlockians I'm barely dipping my toe in the water. For example, I just came across this mind-bogglingly exhaustive Tumblr dedicated to sourcing every prop and costume from BBC Sherlock, from hand lotion to nicotine patches to Mycroft Holmes' umbrella to... wallpaper. They haven't managed to track down much stuff from A Scandal In Belgravia yet, but I have every confidence that if anyone can do the legwork to uncover the rest of the Great Wallpaper Mystery of 2012, it's them. Wow.
Posted by Hello, Tailor at 11:46