It's rare for me to agree with anything the Guardian' Fashion Editor Jess Cartner-Morley writes, but today's "Has couture lost its edge?" article was pretty spot on. So far the shows at Couture Fashion Week have been lacklustre, when ordinarily they'd be the highlight of the fashion world's year. That's the danger of working in an art form that relies upon funding from retail business and work from hundreds of disparate corporate employees worldwide. In times of economic difficulty, imagination and creativity have to fall by the wayside in favour of saleability and broad appeal. The Dior show was a textbook  example of this: sumptuous quality combined with a back-to-basics approach to the classic New Look silhouette -- a collection that could have been released at any time in the last 60 years, and sold well in any of them. 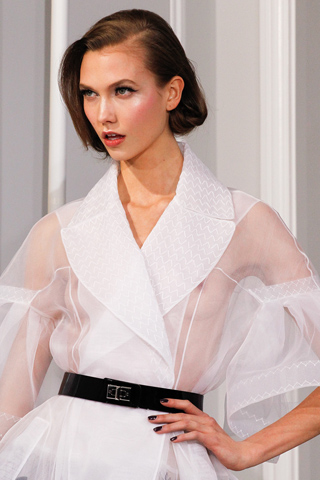 I have less criticism for Dior than I do for many of the other designers who resorted to trotting out entire collections of tired gown clichés this season. The New Look is Dior's heritage and legacy, and the quality of their Couture is so high that I can excuse a season or two of relatively bland designs. Plus, when Dior stages a Couture show they really know how to go for full-on glamour and allow the models to work it for once, instead of making them strut and down like seething, expressionless droids. 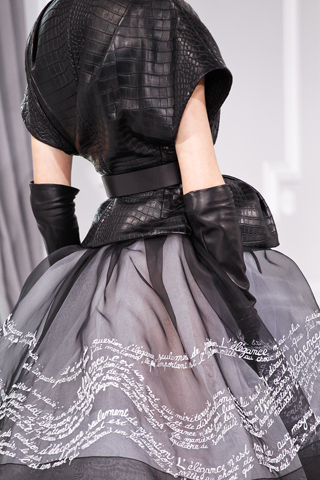 Another example of beautifully-made gowns that are ultimately rather dull. This show had something of the designer's sketchbook about it -- colour-coded outfits wherein almost every model was wearing a relatively normal-looking dress such as one might find at any high-end store, plus matching facepaint and an enormous flower head-dress to spruce it up. It all seemed rather expected -- a sense of colourful richness but with very little thought behind it, and no theme outside the blindingly obvious statement of colour-coded formalwear and extravagant hats. 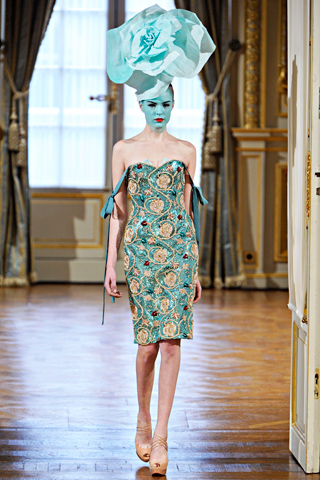 Giambattista Valli
I picked these two outfits since they so efficiently illustrate the many similiarities between the Giambattista Valli and Christian Dior collections. A largely monochromatic palette with a few hints of pastel colour thrown in, narrow-waisted hourglass figures, and a multitude of sheer skirts. Superficial similarities, but close enough that having looked at the Dior show first, Giambattista Valli left me feeling thoroughly bored. While Dior was very obviously Couture -- and quite married to the classic full-skirted New Look silhouette -- many of the Giambattista Valli designs could have come from a ready-to-wear show, since they were little more than classically feminine evening dresses or pencil skirt combos made with transluscent fabric to inject a little daring into the proceedings. 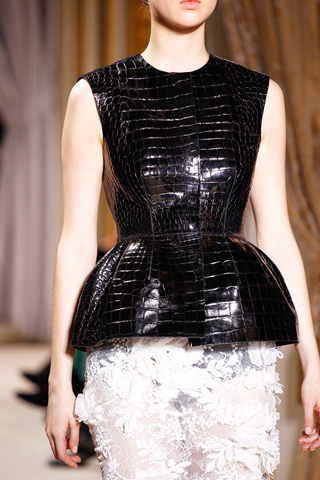 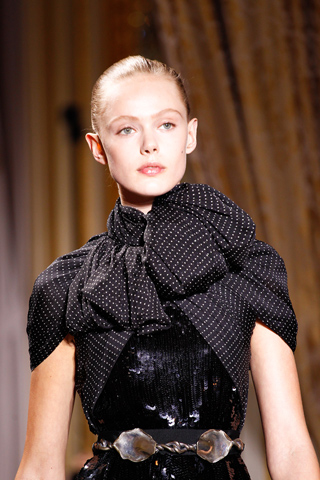 Givenchy
Thanks to the presence of the basketball, this immediately reminded me of Alien: Resurrection. Sigourney Weaver's brown leather costume wasn't a million miles away from some of Givenchy's scaly, bug-like designs this season, and the basketball scene is one of the most iconic scenes in that movie. Givenchy was the first departure from outright prettiness that I'd seen this season, and it was a welcome change. 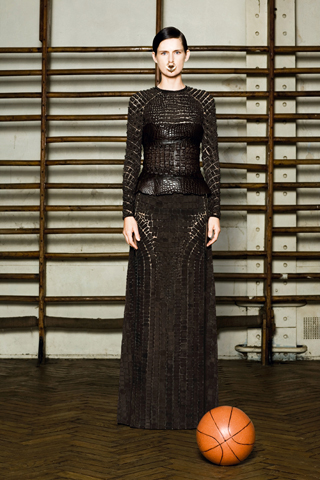 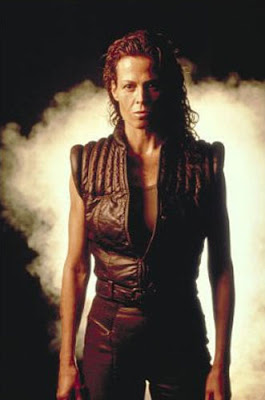 The sci-fi comparisons aren't unfair. Like Versace, Givenchy's show was partially inspired by Fritz Lang's Metropolis, combining the the grim and practical with the floor-length glamour of 1930s evening gowns. I will express no surprise whatsoever if Rooney Mara ends up wearing something from this collection to the Oscars. 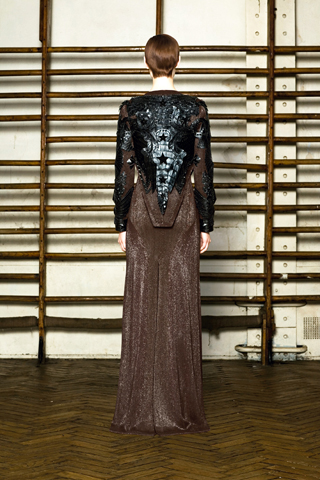 Versace
This was Versace's first Couture show since 2004, and it might have been a wise idea to leave the public showings for another year. The cheap backdrop and garish lighting gave the whole thing something of a gameshow feel, and the designs themselves -- supposedly themed around the movie Metropolis, which was decidedly not known for its bright colour scheme -- mostly looked like B-grade Lady Gaga costumes. And Lady Gaga doesn't do B-grade. 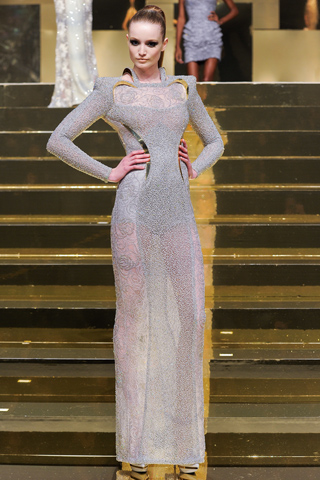 Outfits like this almost smacked of degree shows and trainee designers -- it's nothing more than an extremely simple evening dress, plus wire contouring on one side to give it that space-age look. A watered-down version of mid-90s Thierry Mugler's brightly-coloured, structural extremism. Several of the designs almost looked (dare I say it) cheap, which is the ultimate no-no for Couture. 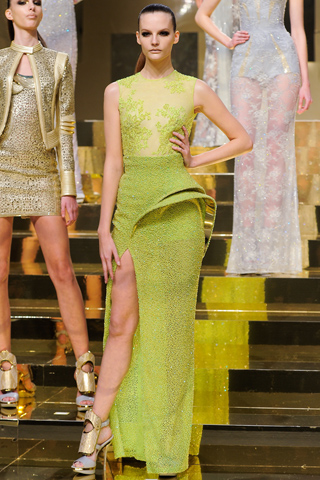 Armani Prive
Snakeskin and business-casual: not a combination you hope or expect to see outside of garish '90s TV. But this time I think it worked, partly because there was no serious suggestion that this was real officewear, and partly because the snake theme was so evident throughout the show. Evident, but unlike the aimlessly colour-coded outfits at Alexis Mabille, not without substance. 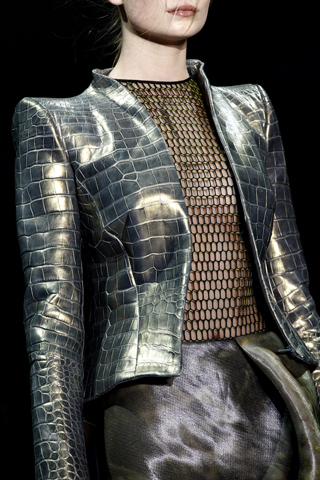 Every single outfit had some aspect of the snake to it. All were sleek and coloured around green jewel tones and glossy black, but the fabrics ranged from literal (fake snakeskin) to more experimental (snake print, fishnet that from afar gave the impression of mottled scale patterns, overlapping sequins, and interlocking slats of fabric that resembled an extreme close-up of scales). 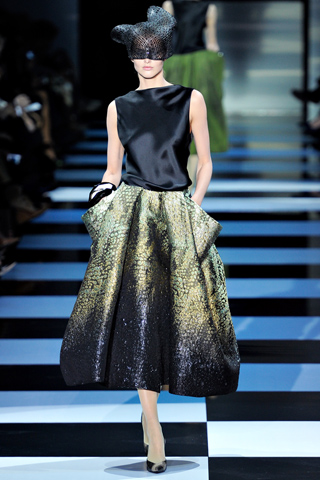 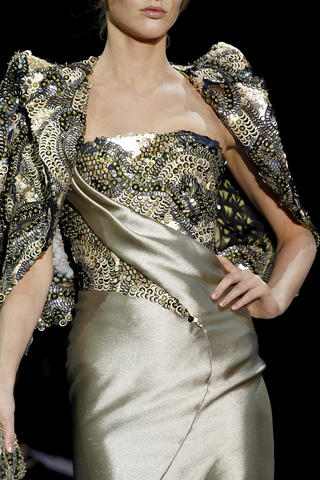 The only actual snakes present were in tiny details. If any of the models had actually been dressed as snakes instead of merely holding a couple of snakelike characteristics, the show would have tipped over into the realm of obviousness. 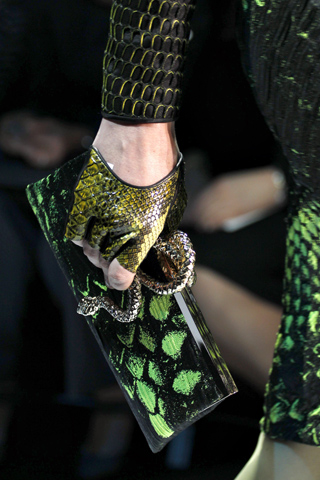 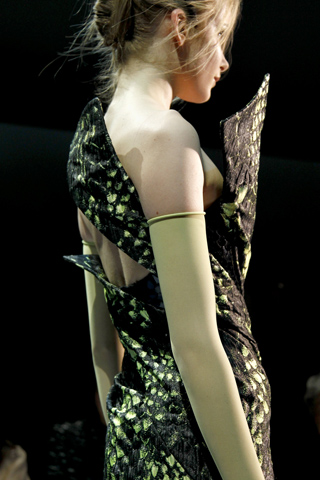 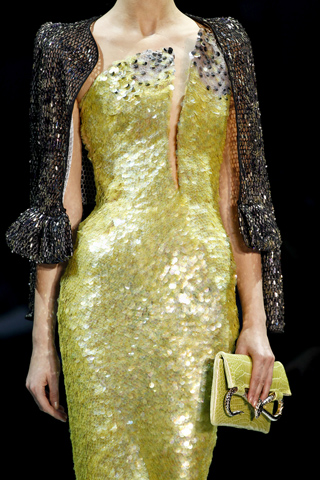