I have a lot of time for Westwood because she very obviously makes clothes for herself. It's silly to expect all designers to wear their own label, but I do sometimes get a little tired of seeing amazing collections being acknowledged at the end with a sheepish bow from someone wearing jeans and a black t-shirt. There's something to be said for creators who visibly value their own product. Betsey Johnson, for example. And Galliano to a certain extent, although towards the end he had definitely entered self-parody territory. (Some, of course, have their own uniform: LAGERFELD.)

The platform shoes were a delight, and pure vintage Westwood. The draped, messy robes and experimentation with rag-like fabrics plus were more 21st century, but still unmistakably Westwood. See, that's one of the many advantages of making clothes for yourself! Instant brand recognition. Almost every aspect of the styling in this show made the models look like shades of Viv herself.

The theme of this collection was "White Drama", which aside from sounding vaguely racist is more or less meaningless. Truly, the movie Zoolander was practically a documentary when it comes to the fashion industry's inability to explain itself coherently. Having now seen every look from this collection, I feel qualified to inform you that the real inspiration for it was "blanket fort formalwear". My evidence:
I look at these pictures and I can't even tell you if I like or dislike them. Someone else might look at this collection and see some kind of underlying message, but I can't really see much of an arc or trend other than white. And a lot of it seems like it's being unusual for unusual's sake. Not ugly or lacking in quality, just... confusing.
Junya Watanabe

The dresses were little more than highstreet casualwear, but the jewel-tone colouring appealed to me and the hats were brilliant. I'm a sucker for feathered headdresses (making me a traitor to the vegetarian cause, I guess). 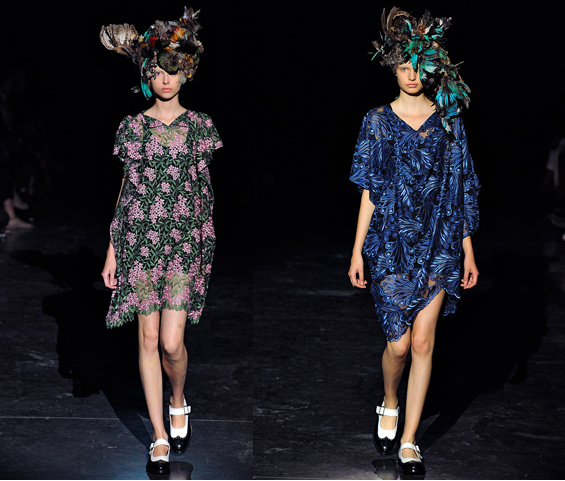 A Weetzie Bat-esque selection of Pacific island-inspired, girly-retro summer outfits, interspersed with traditional-Japanese influences and accessorised with parasols. I LOVE PARASOLS. If only I was enough of an adult to carry one without a) breaking it, or b) immediately leaving it in a bar or on public transport, the ultimate fate of all my umbrellas. 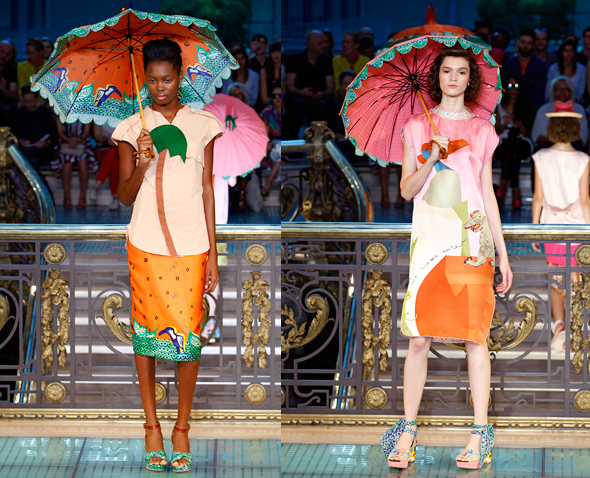