Thanks to Gwen Stefani, I can't see the name Yohji Yamamoto without thinking of the next lyric: "...hanging with the locals" from her somewhat entertaining, somewhat racially suspect Japan-themed solo album. With that out of the way, I can say: Yamamoto is reliably brilliant. He more or less ignores trends and goes on with what he does best: using vast quantities of fabric to swathe models of either gender in charcoal-scribble approximations of suits and ballgowns.

This show included a lot of what I think of as "hospital scrubs chic": clean, non-figure-hugging clothing in neutral tones. Most of the time this look doesn't work for me, but Rick Owens is one of the ones who can managed it -- aggressively unsexy, "pure" outfits that nevertheless have none of the adorable-milkmaid-keeps-entire-body-tantalisingly-covered themes that I find so irritating. White smocks for adults -- possibly adults who work in a hospital in Gattaca. 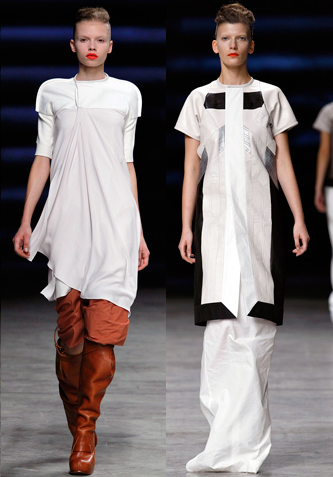 Generally I find Stella McCartney to be boring and overly conservative, but there were some parts of this season that really shone for me. For example, the delicate curlicue cut-outs and hems on what would otherwise have been dull slip-dresses and casual businesswear.

Balmain
Balmain: incredibly predictable. Short skirts, Western-influenced bolero jackets and a buttload of gold embroidery, as per all expectations. Balmain's gold minidresses were phenomenally successful last year and I can only assume that this season will do well off the back of that. And since the label's new head designer is a 25-year-old (!!) I'd say they're doing well. I mean, how often do you hire someone barely out of college and have things turn out looking more mature? He was clearly a good choice.

Actually these trousers kind of look like a costume from Dallas? Or maybe Dynasty. Whichever one it was where everyone put like 20lbs of gold on everything as a subtle indicator of how rich they were.

Most of this collection was quite frankly a bit ugly, but somehow (and yes, I am bracing myself to write the second half of his sentence)... with this outfit, Margiela found the correct balance between fake-carpet skirt, beige shirt and baffling plastic-sheeting torso wrap.