Haider Ackermann's Fall 2011 line was one of the standout shows of last season, in other words damn near impossible to live up to. However, the Spring 2012 show came quite close. Ackermann designs seem they'd feel like wearing stupidly expensive pyjamas, unusually comfortable-looking for catwalk fashion without going anywhere near the sportswear/t-shirt comfort offered by Alexander Wang. All the colours glow subtly as if from within, with none of the harsh seasonal colour-blocking of Jil Sander or springtime prints of Prada. Ackermann shows take place in the half-dark, so the jewel tones of the shirts and dresses aren't washed out by harsh lighting. The clothes drape luxuriously, they're adjustable to a variety of body shapes, they're adult... and they have the Tilda Swinton stamp of approval. SWINTON! 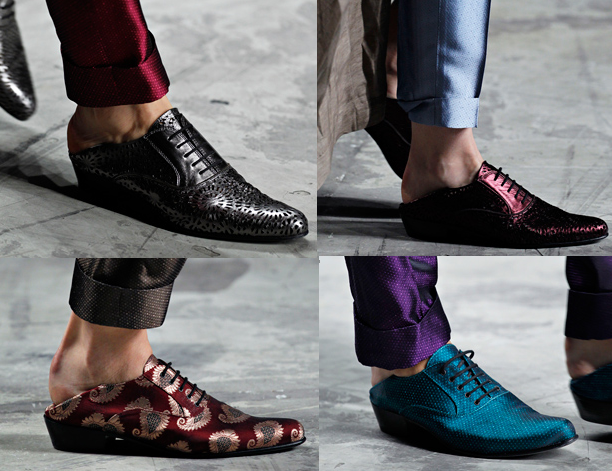 This collection was more androgynous than last season's, but aside from that it almost seemed like a watered-down version of the Fall 2011 line rather than a development. A lot of the jacket/blouse combinations -- although brilliant -- could have been taken directly from last season, and I wasn't very keen on the filmy, transluscent gowns. It's safe to say that I want every single pair of shoes, though.
Ackermann really knows how to make non-skinny trousers. Right now highstreet shops are flooded with a plethora of highly unflattering "harem pants" (I put this in disparaging inverted commas because a TRUE harem pant should look like Princess Jasmine's from Disney's Aladdin, not a hideous saggy-crotch monstrosity that makes the wearer look like they've rapidly deflated by about 20 inches around the thighs and hips), but this season Ackermann has has managed to produce trousers that pleasingly combine elements from pyjamas, real harem pants, and the traditional tailored suit.
I'm including pictures of almost every shoe in the collection because they were all so splendid. The fabrics are stunning, and although I'm not wild about the trodden-down heels (wouldn't they slip off?) they're still far more interesting than the vast majority of catwalk-staple spike heels. 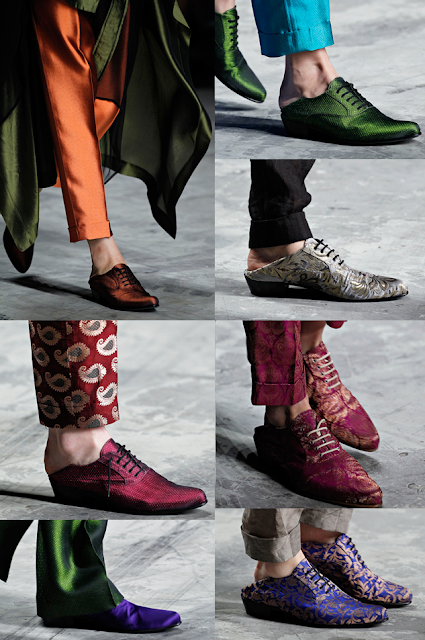 Ackermann's love of tying scarves and belts around his models rather than resorting to buttons or zips always adds to the softness of his designs, and I really liked the small slits visible in several of his suit-jacket designs this season. A lot of designers have been experimenting recently with putting gaps and peep-holes in unexpected places, but most of the time I view it is as rather impractical for those of us who a) aren't as toned as a 15-year-old gymnast, and b) occasionally have to expose ourselves to real-life weather. Also, I've noticed a distressing number of dresses with a sort of slot directly above the midriff area, showing off about six inches of sternum -- it just seems so vulnerable and unappealing. Like in Buffy when vampires wander around wearing t-shirts like, YOU ARE BEGGING TO GET STAKED THROUGH THE HEART, WEAR SOME ARMOUR OR SOMETHING. OK that was pretty tangential, I admite, but it bothers me a bit is all I am saying.

With a jacket like this one you could wear a brightly-coloured shirt underneath and have it show through the gap, like the slits in a 17th Century doublet. Nifty! And no need to have your bottom right rib be 100% chillier than the others.

The shape and cut of Ackermann's designs are usually so sleek and modern, but I love that he's used this incredibly rich, old-fashioned fabric to make them. It looks like a smoking-jacket or Victorian gentleman's dressing-gown, almost.