After the unexpected excellence of the Moriarty-reveal episode, "M", I was kind of expecting last week's Elementary to be a return to form. "M" was everything I'd been hoping from this show: interesting crime-writing as well as the typically adorable and intelligently-written Holmes/Watson dynamic. So I was pleasantly surprised when "The Red Team" was similarly free of the weird tangents and embarrassing cop-show detective work we'd seen in most of the first 11 episodes of the season. 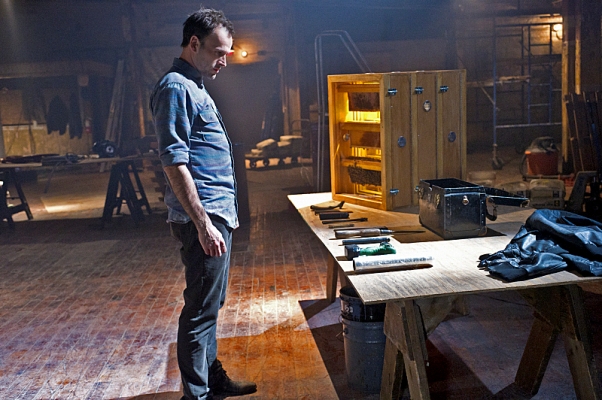 I haven't seen this week's episode, but right now it feels like Elementary has taken a real turn for the better. Between "The Red Team" and the extra Superbowl episode, "The Deductionist", it's beginning to seem like Elementary has done away with weird-ass storylines like the child psychopath episode that literally left me saying "what are you talking about??" out loud to the screen. Anyhow, I think the M/Red Team/Deductionist arc has worked really well for a couple of reasons:

"M"'s success was that it only really had one big-reveal moment, and that revelation was way more plausible than any of the dozens of brain-wrinkling red herrings doled out to us in previous episodes. Anyone who has any familiarity with Sherlock Holmes could predict that Moriarty would turn out to be behind Moran's actions, but the revelation that Moran hadn't killed Irene was believable and (for me, anyway) a plausibly surprising twist. Although I do still find it difficult to be invested in the "dead woman inspires the whole plot" trope, which in this case is particularly unnecessary because Sherlock Holmes is essentially a character who is programmed to never need a reason to fight crime. The dead-girlfriend motivation serves no real purpose other than to smooth out the potentially douchey implications that he regularly employs sex-workers, which... is also kind of pointless from a plot/characterisation standpoint. 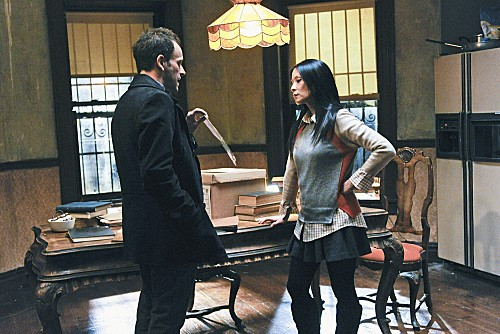 Regarding Moriarty, I actually prefer Elementary's route to the way Moriarty was introduced in BBC Sherlock. Andrew Scott's performance in Sherlock is fantastic, but this type of theatrical villainy wouldn't work in the context of a relatively slow-moving show like Elementary. Once again, this is an instance where Elementary is actually running closer to Sherlock Holmes canon, with Moriarty being portrayed as a distant figure whose power is only evident through the actions of others. In the two most recent Sherlock Holmes adaptations -- BBC Sherlock and Robert Downey Jr -- Moriarty has been very hands-on and has had face-to-face interactions with Holmes quite early in each story. This is pretty much unavoidable in a feature film or three-part miniseries, simply because isn't enough time to build up the kind of ominous, "Napoleon of crime" machinations required for a direct-from-canon interpretation of Moriarty. But in a long-form series like Elementary there is definitely room to introduce a few more hints of Moriarty's control of the criminal underworld before he shows up in person. 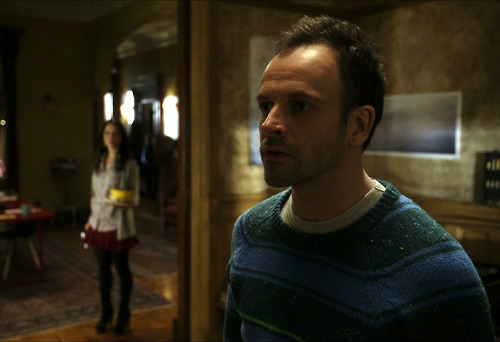 Elementary's ability to move slowly is one of its greatest strengths. Although the murder-of-the-week nature of the crimesolving does allow for some weak points, the Holmes/Watson relationship is more solidly written than pretty much any other show I've seen in this genre. Usually it's the case that either the central relationship in a show is BFFs-from-the-start with occasional moments of quickly resolved "you'd have to be an idiot to believe this" conflict, or the two main characters are needlessly antagonistic beyond the point where it'd be remotely believable for them to still "dislike" each other. In Elementary, it's taken 15 episodes for Watson to tentatively suggest that she and Holmes are friends, and although it's clear that both characters are now fully invested in each other, they're still trying desperately to hide it. The pair of scenes in "M" where Holmes and Watson awkwardly mutter to each other that they like spending time together was beyond adorable, and seemed far more believable than the kind of instant buddy-cop dynamic manufactured by many other crime shows. 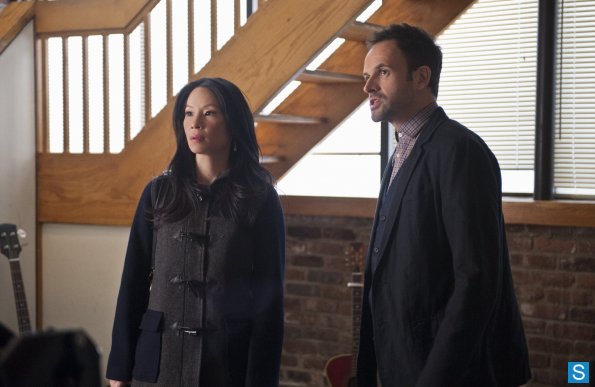 Similarly, the decision to have Captain Gregson not forgive Sherlock for his actions in "M" seems astonishingly mature when you remember it's happening in a show that aired a non-profit brothel Russian spy murder conspiracy episode. Obviously they couldn't have Sherlock actually be fired as an NYPD consultant, both for narrative reasons and for the perfectly sensible points Sherlock puts across in the episode himself. But in having Gregson explicitly state that he no longer trusts Sherlock, audiences actually have to remember that Sherlock tying up a serial killer with plans to viciously torture him to death was a bad thing. To be honest, I'm pretty happy to see this because there are a hell of a lot of TV shows and movies that cheerfully handwave all sorts of terrifying vigilante justice, to the point where I'd barely have batted an eyelid if Sherlock's homicidal attitude had been completely ignored as soon as the episode was over. The emotional continuity in this show is just good, you know? Characters don't immediately forgive and forget what happened in last week's episode, even if the writers seem to forget major continuity details like, oh, the brand new sponsor who was a) awesome, and b) introduced like five episodes ago and then never spoken of again. Alfredo, we hardly knew ye.