I hope everyone else was as invested in Clyde the turtle as I was. Sherlock used him as a paperweight. He said he was going to make him into soup. If you don't find this unspeakably, twistedly adorable then I despair of you. SHERLOCK FAILS THE VOIGHT-KAMPFF TEST. SHERLOCK IS A REPLICANT. IF SHERLOCK SAW A TURTLE ON ITS BACK IN THE DESERT, HE'D MAKE IT INTO SOUP. 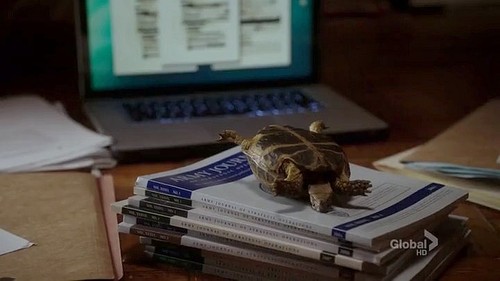 On top of the introduction of this vitally important new supporting character, "The Deductionist" was another legitimately good episode all round -- except, perhaps, for the opening scene. Man, could you lay on the whole "we're pandering to the Superbowl audience" thing any thicker? There were a few seconds where I was like, "wow, has Sherlock seriously hired a couple of hookers to do a criminal roleplay striptease for him?" but no, it was pretty much just a gratuitous girls-in-underwear scene. I can't be bothered getting all angry feminist about that, but I will say that right now, Holmes' sexuality seems like the weak point in some otherwise very solidly-written characterisation. Some moments, such as when Holmes is being up-front about his sex life to the point of social awkwardness (ie, when he's talking to Watson about the profiler in "The Deductionist") seem very in-character, but other things just don't ring true. One scene that comes to mind was when Holmes was waving off a couple of hot blonde twins at the beginning of one of the earlier episodes. That brought me right out of the show because it just seemed like such a cheap shot: "I AM MAN". 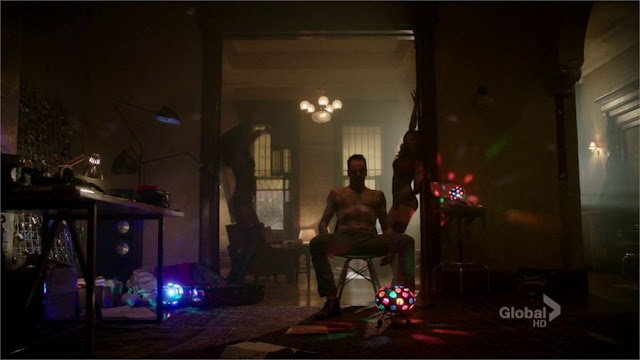 Maybe this is just me being unnecessarily neurotic, but the writing for Holmes' sex-life feels very unbalanced. I'm totally willing to remain open-minded about Sherlock Holmes as a sexual being, particularly since Elementary is already such a different setting from the original stories, but it seems a lot like the writers went too far in the other direct and are now hanging in mid-air, windmilling their arms around. What is Sherlock, really? Is he an emotionally damaged former addict whose attitude to relationships was ruined by the death of his ex-girlfriend, and who now can only engage with sex workers? Is he the man we saw in the pilot episode, who views sex as a passionless bodily function? Is he a submissive who hires professionals because he wants to be in experienced hands? Or is he the guy who engages in dire American teen-boy TV fantasies like threesomes with a pair of blonde twins? 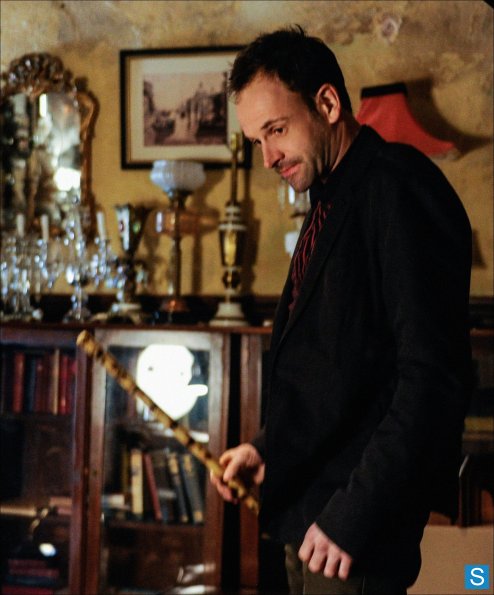 Overanalysis of Sherlock's sex-life aside, I'm hoping that the story structure of episodes like "M", "The Red Team" and "The Deductionist" will be carried through to the rest of the season. The main issue with the crime-writing the first 11 episodes was that they were trying to emulate the structure of a classic Holmes short story in a modern crime TV style. Unfortunately, weird set-ups and overly complicated resolution scenes do not a Holmes story make. "M" wasn't just good because it was an emotionally-charged backstory episode, but because there was no need to liven up the story with unnecessarily wacky twists and turns. Like "The Deductionist", it was a chase story in which audiences and characters both (more or less) already knew the culprit. Apparently, removing the whodunnit factor from Elementary makes it a significantly better crime show -- who knew? "The Red Team" was more similar to an early Elementary episode, except the silliness of its storyline fit in perfectly with the silliness of many classic Holmes storylines. Secret cabal of anti-terrorist war game geniuses, slowly being killed off one by one? Straight from Conan Doyle's typewriter, seriously. (Although the smarmy old rich white guy in the sweater vest turning out to the murderer was maybe the least surprising development ever.) 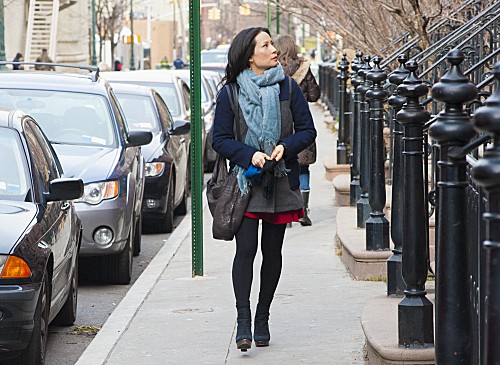 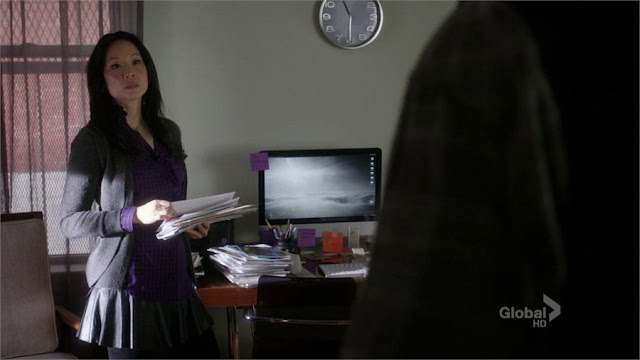 As for costuming, I adore the almost religious attention to consistency the designer has been putting into Joan's outfits. As well as the purple/grey colour scheme that she and Sherlock share in many scenes, Joan's clothes are incredibly uniform: mini-skirts, opaque tights, an untucked shirt or t-shirt and soft knitwear in pretty much every episode. Plus the costume designer shops specifically at realistically affordable stores like H&M. Sherlock, I think, has been getting more formal recently. In the last couple of episodes we've seen way more appearances from the shirt-and-waistcoat combo rather than all the thriftstore t-shirts, although that may just be coincidence. The best detail of all was when Sherlock barged into Joan's room while she was asleep and laid some clothes out for her to wear.... and then later on in the episode you see that she's wearing the outfit he picked out for her. 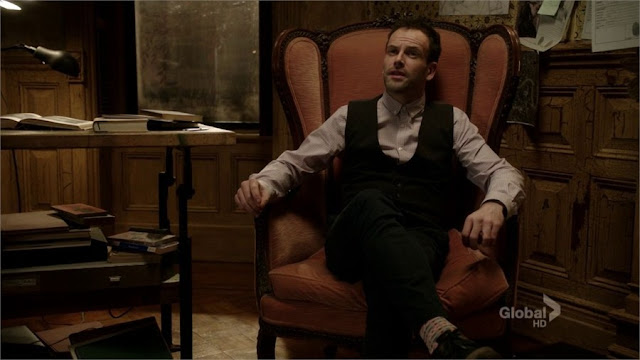 Previously on Elementary
Posted by Hello, Tailor at 10:49