The new Judge Dredd movie is a great chick-flick.

Most people have a favourite genre of fiction, one where they'll watch or read any old crap as long as it ticks the right boxes. For my mother, it's those crime novels that always have a dark picture of an alleyway on the cover and a blurb including the phrase "web of deceit". My friend Alex is a great aficionado of any and all vintage SF/F where the sets and costumes look like they were made out of cereal boxes. My own speciality is dystopic sci-fi/action movies, meaning that I got near-equal quantities of entertainment from the truly brilliant Children Of Men as I did from the baffling cinematic fart that is The Spirit. (For those of you who haven't seen The Spirit, it's basically what would happen if someone tried to remake Sin City while tripping balls. And allowed Samuel L Jackson full creative control over all of his and Scarlett Johansson's costumes. Seriously, ask me about The Spirit sometime. It has a bellydancer/Nazi/dentistry scene that you would not believe.) 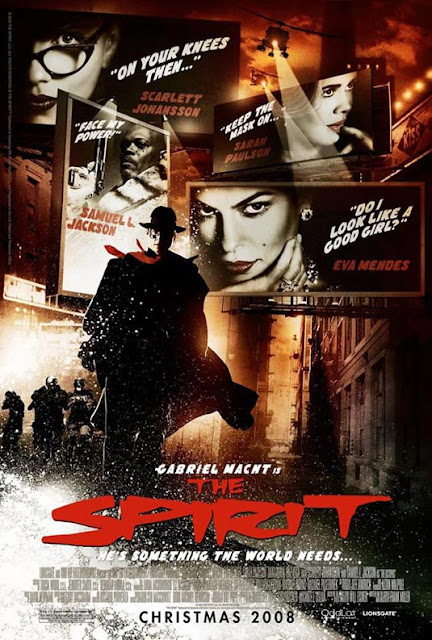 My point is, you could not pay me to watch a three-star movie about a middle-aged white guy angsting over his divorce from Kate Hudson, but a three-star movie where the exact same guy duels a malfunctioning android in a city made entirely from neon striplighting and concrete rubble? I'm sold.

The problem is that my own outlook on the world often seems to clash with that of the filmmakers I love, ie: I generally view women to be people, and the creators of the films I watch give every impression of disagreeing with this viewpoint. Of course, I could try watching nothing but feminist documentaries and serious real-life dramas about women overcoming personal tragedies, but quite frankly those kinds of movies don't fulfill my needs vis-a-vis mutant zombie hordes, improbable leather body-armour, and soundtracks that sound like twelve-ton steel girders being banged together by Skrillex. Sadly, if I want to sit down and watch some ridiculous bullshit about a bunch of murderous idiots rappelling down the ruins of a post-apocalyptic megacity, then I generally have to put up with the only female characters in the movie either being Lara Croft clones, or a roomful of strippers who get gunned down in the second act. 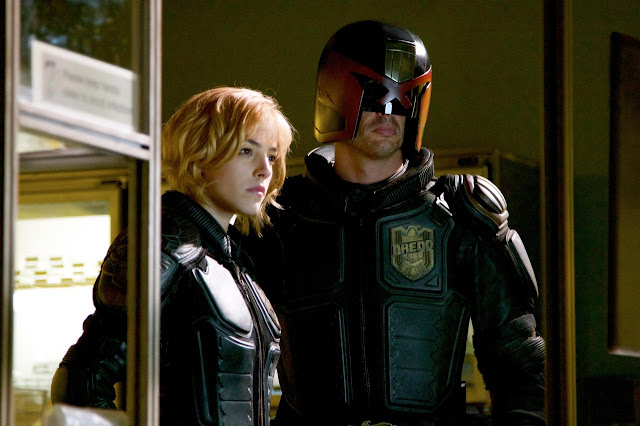 My knowledge of the Judge Dredd comics is fairly limited (I'm more of a Halo Jones girl), but the trailers for the new movie were generic enough that I had every reason to suspect that it was your average run-of-the-mill "guy goes on a brainless killing-spree in the name of Justice" story. The surprising 95% Rotten Tomatoes rating and the presence of Cersei Lannister as the primary villain (!!!), however, were enough for me to give it a try. And you know what? This is an ideal girl-nerd action movie. It has all the exploding-head violence you'd expect from a movie about a capital punishment-obsessed cop battling drug-dealers in a futuristic towerblock, but none of the sexism you'd expect from, well, any film with that premise. Lena Headey is sneeringly excellent in her somewhat typecast role as a villainess perched at the top of the criminal food-chain, ordering her lackeys to rain death upon any commoners who get in her way. Dredd's rookie sidekick (Olivia Thirlby) may be young and inexperienced but she's also competent and professional, and actually gets more screentime and character development than Dredd himself. 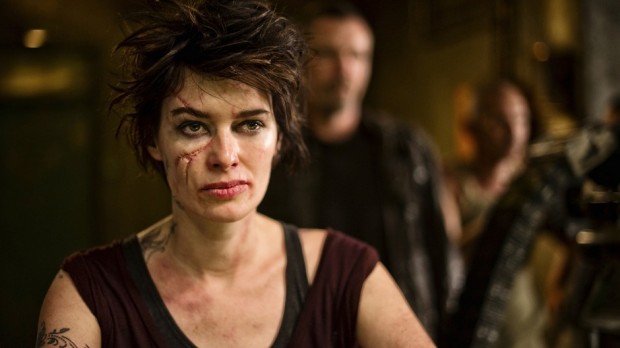 Dredd (or Dredd 3D, because the 3D-movie marketing people are apparently still trying to make Fetch Happen) effectively shoots down the assumption that if you're going to see a brainless action movie, you're going to have to put up with some offensive shit as well. A lot of the time when people complain about Transformers and how it's, you know, sexist and all-round badly written, the comeback is that it's "just a stupid blockbuster". And this doubly counts for movies with higher age-ratings, where the filmmakers have a green light to show as much T&A as they want. In the case of Dredd, however, you have a relatively simple comicbook adaptation that's dark and gory enough to receive an 18 rating and yet mysteriously contains zero scenes where the camera lovingly pans over naked and/or recently-murdered strippers. The thing is, I'm not even advocating some kind of puritanical no-boobs law for cheesy action movies, I'd just like filmmakers to class up the boobs scenes a little, you know? Like maybe giving the lady characters a personality other than "daddy issues" or "likes to blow things up while wearing hotpants". 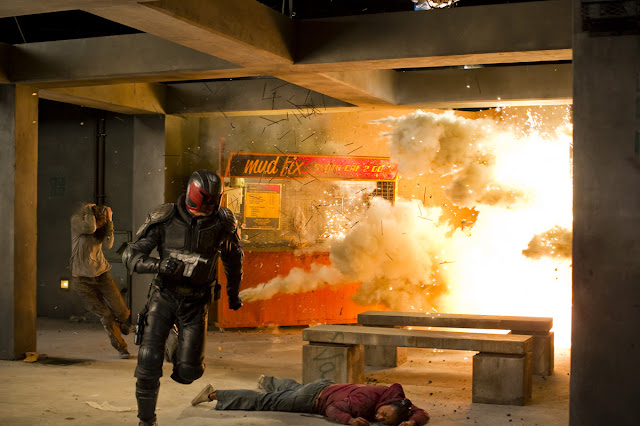 After watching Dredd, I realised that the reason why it seemed so... weird, I guess... is that it didn't follow the kind of predictable cliches I was expecting. This type of movie -- especially one with an adults-only rating -- usually has very poorly-drawn characters and a lot of throwbacks to grindhouse cinema, but despite Dredd's plethora of extreme violence it never really went that route. Although it has the basic plot of a shoot-em-up videogame, the decision and emotional reactions made by the characters were far, far more intelligent and realistic than other movies of the genre. Which makes sense when you find out that it was written by the screenwriter of 28 Days Later, Sunshine, and Never Let Me Go, all sci-fi movies with a broader appeal outside the main target audience of teenage boys and genre fans. 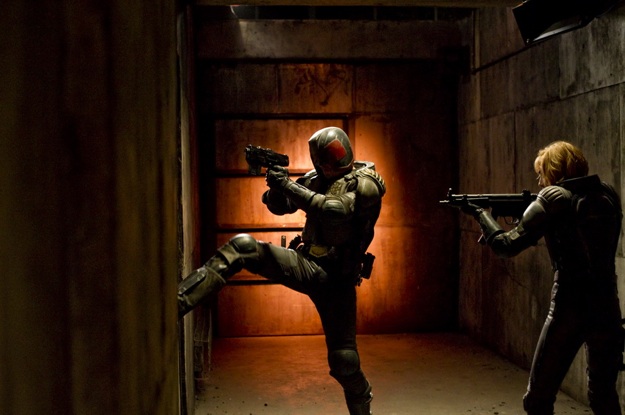 Judge Dredd has more in common with the emotionless killing-machines of '80s action movies than with the wrong-place-wrong-time John McClanes you see in most modern blockbusters. I'm kinda hoping this movie is successful enough for a sequel, actually, since the director has already stated that he'd like to explore the idea of Dredd as a fascist. Judge Dredd is in the unique position of being an adult comicbook antihero who hasn't been neutered or simplified by his film adaptation, filling a role that's almost a parody of the kind of right-wing American cop characters who glorify the idea of hyper-violent law enforcement. In some ways, Dredd 3D reminded me more of sophisticated films like Blade Runner and A Scanner Darkly than it did of more thematically similar movies like Demolition Man. The vision for Mega City One was founded in the real world rather than looking like the type of cartoonish, larger-than-life post-apocalyptic settings where most leather-clad antiheroes seem to reside. The aesthetic was solidly reminiscent of inncer-city towerblocks in the real world, neglected and graffiti-spattered, with charmless breezeblock slums sporting ironically chirpy names like "Peach Trees".

Upon reflection, I'd rate Dredd as being significantly better than The Dark Knight Rises because it's so much more consistent and self-aware. Obviously Nolan's Batman trilogy is more complex than any Judge Dredd series is likely to be, but TDKR missed its mark by such a wide margin that I'd put it below a simpler but more clearly thought-out movie like Dredd. And -- surprisingly enough considering Judge Dredd's total absence of backstory or character-development -- I found him to be a more appealing and engaging character than the most recent appearance of Nolan's Bruce Wayne. The two characters fill the same basic niche, but Dredd is virtually ego-free while the Dark Knight movies gradually became more and more about Bruce Wayne's manpain until we reached a point where the actions of side-characters and villains seemed tailored exclusively to inspire an emotional reaction from him. Judge Dredd is motivated so purely by dedication to the Law that we never even see his entire face, yet he somehow seemed more authentic than TDKR's Bruce Wayne.

Links
The full Dredd soundtrack is available to stream online, and I'd highly recommend it for any and all criminal ventures out into your friendly neighbourhood post-apocalyptic megacity. Also available is the equally excellent but rather more '80s-influenced Drokk: Music Inspired By Mega City One, by Ben Salisbury and Geoff Barrow of Portishead.

Interview with Alex Garland, the writer and producer of Dredd. Having read this, I can really see how the film turned out so well and so faithful to the comics.

Previously on Hello, Tailor: Dressing for the Apocalypse, and Movie Costumes I Have Loved: Doomsday.
Posted by Hello, Tailor at 12:29