This is going to be the kind of What I Did On My Summer Holidays post that seldom appears on this blog, mostly because I've been living in what amounts to a gigantic artists' commune for the past two weeks and am consuming about 1% of the geeky pop-culture stuff I usually do.

Some background, first: The Edinburgh Fringe is an alternative theatre/comedy/music/art festival that runs throughout August, in conjunction with various other arts-type festivals around the city. This year's Fringe programme includes 2842 "official" shows, most of which are stand-up comedy and experimental/indie theatre, plus tons of street performers and unofficial stuff on the side. Basically, for the duration of August every single building in Edinburgh that could conceivably be turned into a theatre venue, is. Up to and including lifts, taxis, and peoples' bedrooms. I'm currently living in the lap of luxury because I have an actual bed to sleep in (thanks to my lovely friends Grace & Hector!), which is more than many of the performers get. 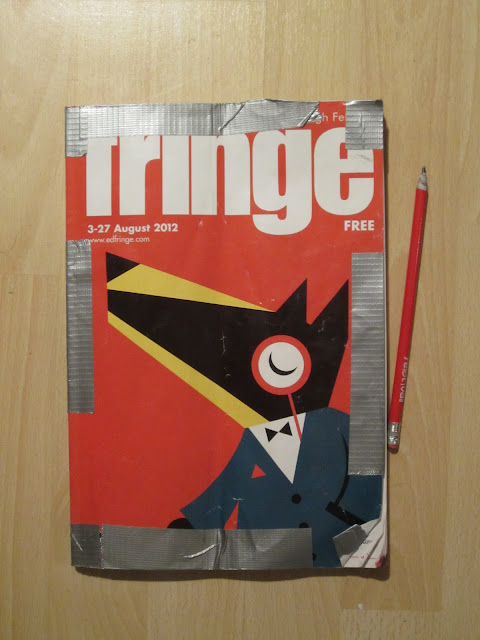 (As an experienced Fringe-goer, I sensibly reinforced my programme with duct tape as soon as I got my hands on it. People may smirk, but WHATEVER. By the end of the month I'll be the only one whose programme hasn't had to be replaced at least once.)

I'm going to as many shows as it's humanly possible to fit around my work schedule, covering as wide a variety of genres as I can. I assume that it's rather obvious at this point, but I LOVE THE FRINGE. There's something for everyone here, from cheesy mainstream stand-up comedy to weird experimental theatre to circus acrobats to jug bands to Tibetan Book Of The Dead: The Musical. Picking what to go to is very difficult, particularly in the first week when reviews haven't come out yet, but the way I see it is that if you're there for the entire month it's almost a good thing to see some terrible theatre in the first few days -- it's an interesting experience, and it provides a kind of palate-cleanser for the rest of the month. (I'm especially sticking to that philosophy this year because the first show I saw was without a doubt the worst piece of theatre I have seen in my entire life.) 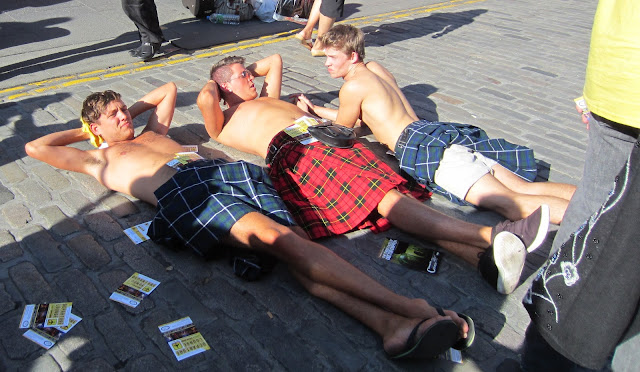 Aside from the sudden influx of artists, musicians and theatre folk, the main major change Edinburgh experiences in Festival season is the closing down of the Royal Mile, the highstreet that leads up to Edinburgh Castle. During the Fringe, the Mile is a free-for-all for any performer who wants to advertise their show, meaning that all day every day the streets are filled with professional outdoor performers like jugglers and magicians, plus hundreds of people in weird costumes trying to entice passers-by to come to their shows. It's unfortunate that I don't have my camera with me at work, because these few tourist snaps really are the thin end of the wedge when it comes to weird shit you see on the Mile during Fringe season. My favourite so far is probably the moment when I was helping a fire-juggler set up his stuff while a row of voluminously "pregnant" schoolgirls watched on in the front row. I turned around just in time to see a giant 10-foot sperm advertising Sex Education: The Musical walk along behind them. 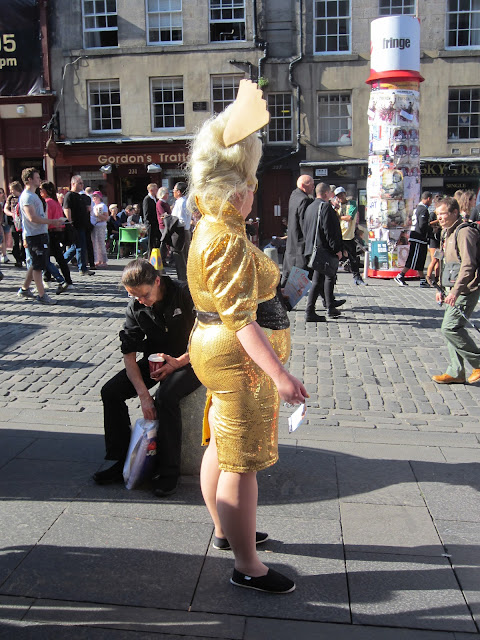 This lady is one of the Sundaes, a girl group who I unfortunately haven't seen perform yet because one of them had a wig malfunction when she was meant to be performing on my stage. There are several performers that you get to recognise very quickly if you're living in the main Old Town section of Edinburgh, purely because they're so ubiquitous. Then, of course, there are the ones who aren't so much "performers" as just Fringe-season fixtures. Edinburgh is a small and insular city at the best of times, with a weirdly strong divide between the Old and New towns, but during the Fringe this intensifies because people are so much more recogniseable when they're walking to and from the same venues every day, wearing the same costumes. 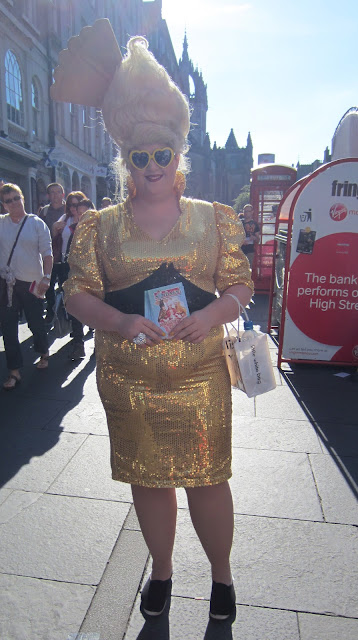 Probably the most famous of the non-performer Festival people is Lewis, the self-proclaimed King of Scotland. He wasn't around on the day when I took these photos, but if you're from Edinburgh you'll probably recognise him. He has a long grey beard, carries a pink suitcase and always wears a kilt and several brightly-coloured shirts. He's such a Fringe fixture that most of the Street performers don't mind if he decides to go for a brief a brief stage invasion.

The Pleasance Courtyard is a typical example of ridiculous seasonal venue organisation. It's a set of stables and random rooms that for the rest of the year are mostly empty, but during the Fringe become an incomprehensible warren of bars and mini-theatres. The signpost in the middle of the courtyard seems to be well aware of this: 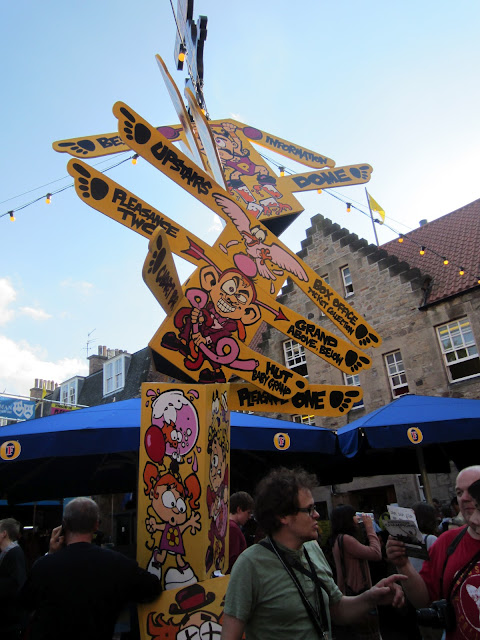 Another entertaining feature of the Pleasance Courtyard is the number of "theatres" there that are literally just porta-cabins. This one houses Peep, a specified venue that hosts three short plays performed in the setting of a peepshow booth. 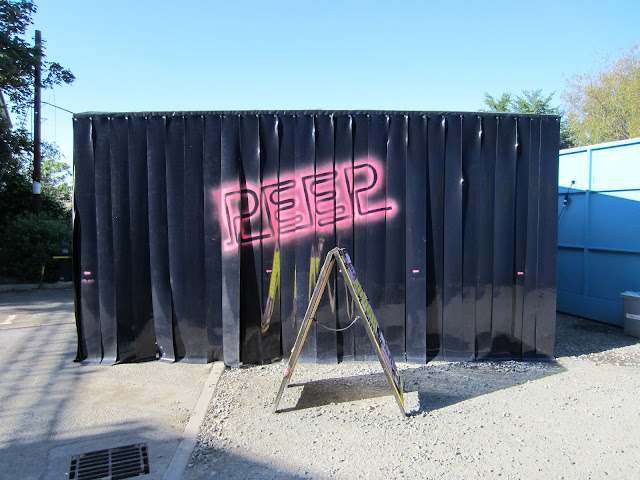 I considered writing a more formal guide to the Fringe, but by now it's kind of a moot point since we're already halfway through the month plus most of the readers of this blog are in different countries, never mind "not in Edinburgh". This is only the second year I've been at the Festival for the full duration, but I do have a few guidelines for general survival and/or picking and choosing between the dazzling multitude of performances.
One of my most solid rules is NEVER SEE MACBETH, which is mostly founded in bitterness because there are always at least (AT LEAST) ten Macbeths on every year and more often than not they'll be put on by an American youth theatre group or some kind of vaguely embarrassing musical-theatre company. Of course, rules are made to be broken and this year I've already found myself going to see one of the Macbeths, a Polish production that involved a lot of fire, nudity, violence and stilt-walking, and the minimum possible quantity of actual Macbeth. The other day I came up with a possible solution to the Macbeth issue, though: DRUNKBETH. I don't have the time or wherewithall (or masochism) to do this myself, but hopefully someone else will one day. The gist of it is: Go to as many Macbeths as possible in a 24-hour period (at least six or seven should be do-able), drinking continuously throughout in some kind of as-yet undecided Macbeth drinking game. 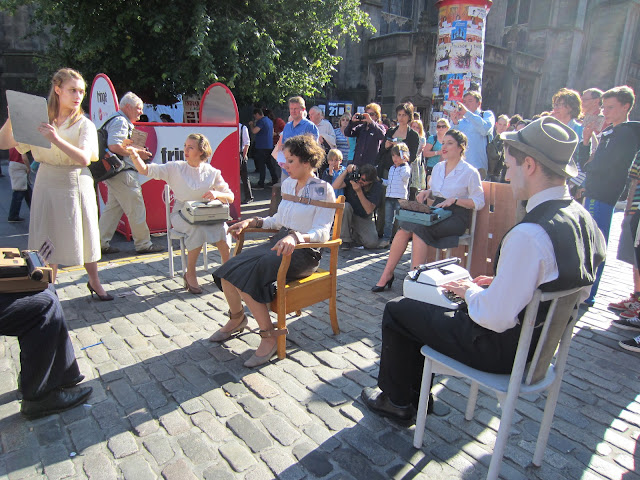 These guys set up some kind of courtroom/electric chair scene in the middle of the road. And I love how the tourists in this next picture decided that the best person to ask for directions was the 10-foot-tall, stilt-walking ukulele player. NBD; just another day at the Fringe. You can get photos like this pretty much by pointing your camera in any direction and taking a picture at random, to be honest. 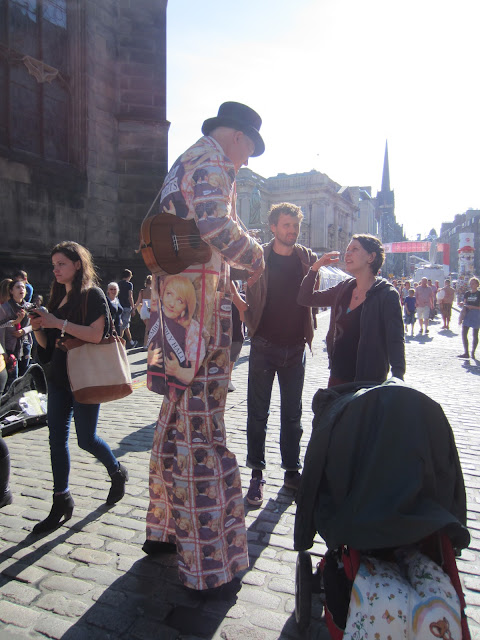 Trying to converse with a living statue is always disconcerting because they tend to stay in character and it's like talking to some kind of Doctor Who character and/or steampunk automaton. Yesterday I was trying to explain a performance schedule to a living statue (not this one) and felt like an unwilling participant in some kind of performance art while various tourists took photos of our joint one-way conversation. 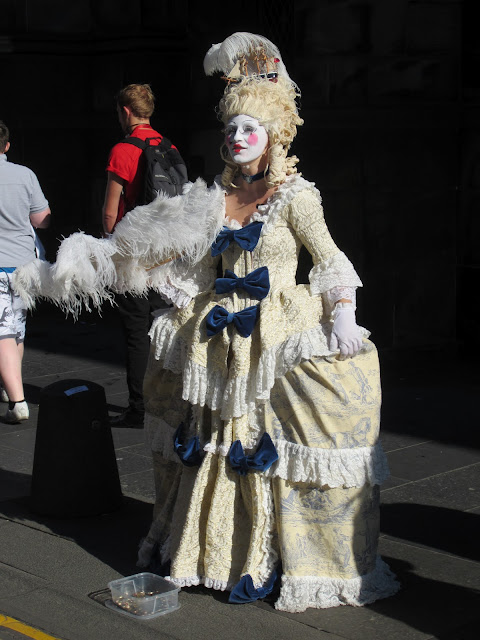 These two girls were advertising a variety show featuring Frank Sinazi, a Frank Sinatra/Hitler combination impersonator. They seemed quite surprised when they handed me a flier and I told them I'd already seen him a couple of nights ago. Anyway, were it not for the swastika, this lady's skull headdress would be pretty damn awesome. 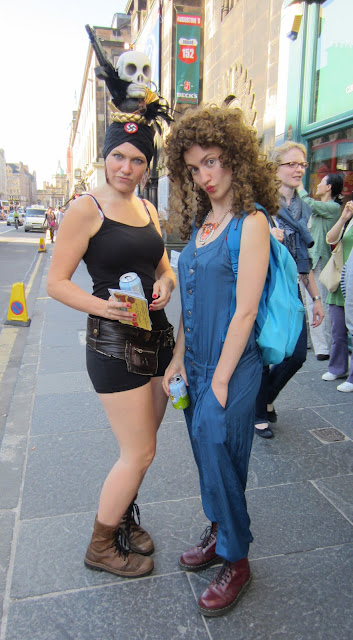 The show I went to this evening was a circus/physical theatre retelling of the Rime of the Ancient Mariner, which had the added bonus of being hosted at Summerhall. I don't know if it's just my own ignorance showing itself or if it's a matter of bad advertising on the part of the venue, but I had no idea how varied and straight-up BIG Summerhall is. It plays host to several performance art and dance shows, but is also the main venue for the Edinburgh Fashion Festival (!!!) and a ton of Art Festival stuff that practically seemed like it was being hidden from the general public. For example, located next to one of the bathrooms was this: 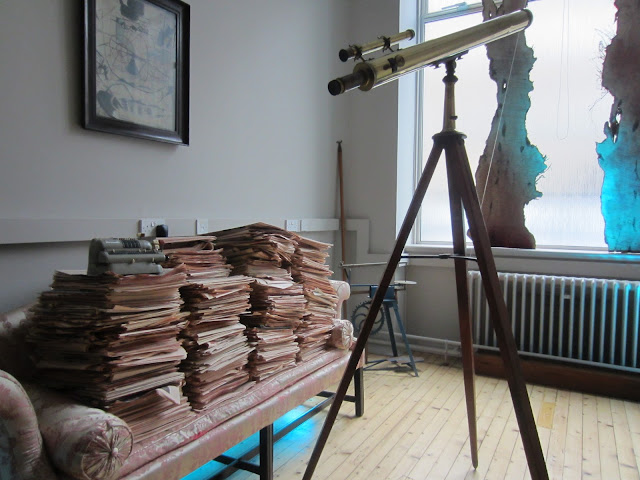 And almost every room in the huge, hive-like building was home to some other piece of unadvertised installation art. A fascinating venue to explore, but their marketing department clearly needs some help if both me and my companion (who is an artist based in Edinburgh, for god's sake) were unaware that most of that stuff was there in the first place.

The show itself was in what seemed to be some kind of museum (also mostly unlabeled), upstairs from "the dissection rooms" (this particular block was a former vetinary hospital/school) and between a couple of disused labs. One of my many favourite things about the Fringe is the random nature of the various performance spaces, which are often totally bizarre and unexpected, and can have a significant impact on the staging and tone of the shows for which they are used. 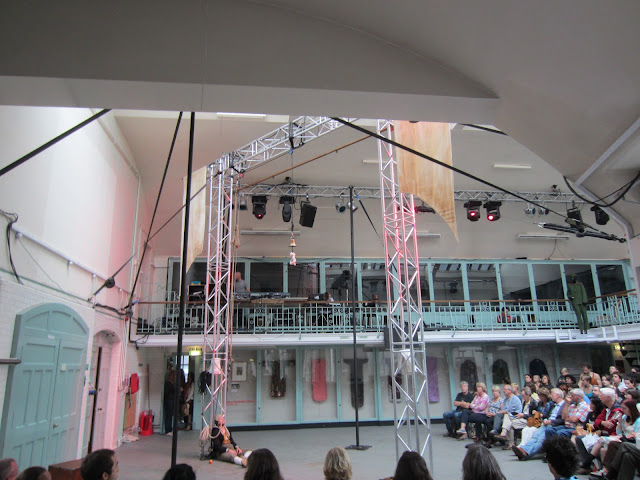 On Sunday night I went to An Evening With Amanda Palmer And Neil Gaiman, which is sure to be one of my highlights of the month. Amanda Palmer's music and career has been my #1 fandom since childhood (back when it was still The Dresden Dolls' music and career), and every time I see her she seems to become more entertaining, thought-provoking and beautiful. Right now I'm rending my clothes just a little because she's going to be making a surprise appearance at the Boom Boom Club cabaret tonight, but it doesn't start until 12:30am and I have work tomorrow. TRAGEDY. The idea of having an Amanda Palmer concert take place in the same city as me and me not going to it = torment and agony

I'm glad I made it to the Amanda & Neil show because it's so different from what I presume most of her gigs will be like for the next couple of years. Her new album is about to come out, at which point she's going to be touring for at least a year with her new band, on a more traditional touring schedule of album-track performances. An Evening With Neil And Amanda is more relaxed, with appearances from unexpected guests (the hilarious Andrew O'Neill and Michael Pope) and a combination of original Amanda songs, semi-obscure covers, and readings from Neil Gaiman's poetry and as-yet-unpublished next novel. 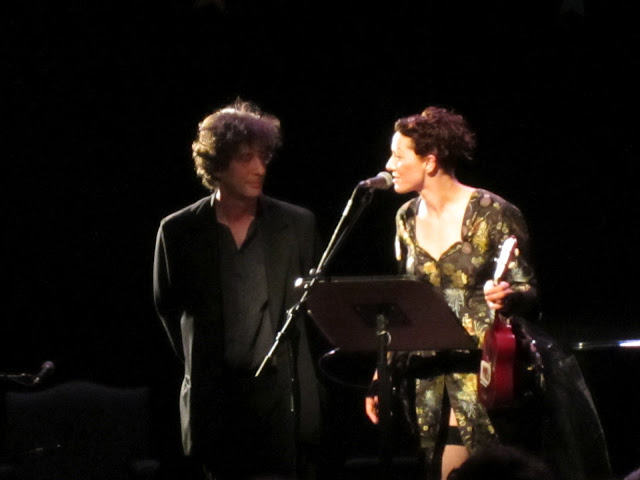 Oh, and as a postscript, here's a picture of my friend Dan. I occasionally get people asking why I don't post more pictures of my own outfits, and the real answer is because I don't have a decent camera, I'm a terrible photographer, I don't have a full-length mirror, and I'm too British to get other people to take photos of me to conceitedly post on the internet. So instead, here is a photo of Dan. He has great dress-sense and I can get a good photo of him without ending up with a Myspace Arm situation occurring. 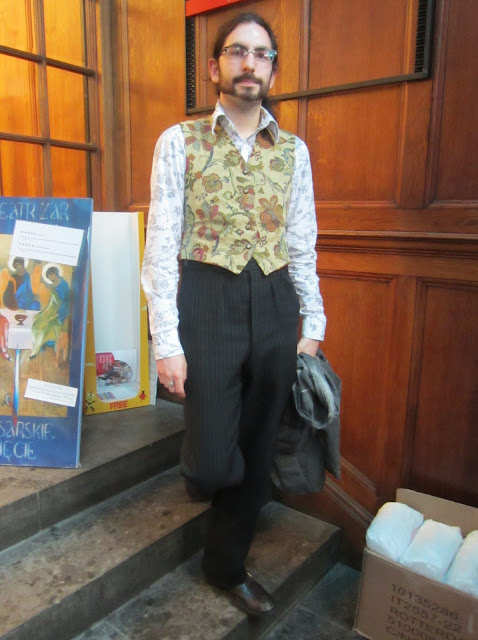