One of my favourite parts of Captain America: The First Avenger is when Steve Rogers, clad in a delightfully low-budget proto-version of the "real" Captain America costume, goes on tour with a chorus of USO girls and stars in public service films urging all patriotic Americans to invest in War Bonds. Not only is Steve Rogers unendingly adorable in the role of bashful-yet-enthusiastic wartime mascot, but this one small montage leaves room for all sorts of great backstory elements: The urban legend of Captain America having punched Hitler in the face (he did, multiple times -- onstage), the idea of the comedically naiive Steve Rogers going on tour with a bunch of chorus girls in sexy outfits (it'd be like Some Like It Hot, except with superhero outfits!), the development of Steve's own ideas about the press and what it means to be a public icon... There are just so many possibilities! Actually, I think you should just watch the "Star Spangled Man" sequence, which caused me to grin so widely when I saw it in the cinema that I thought the top of my head was going to come off. 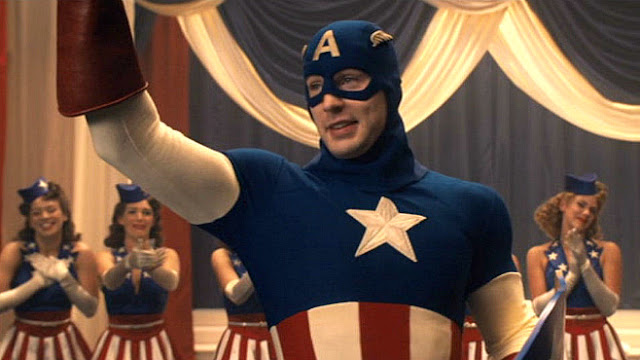 I only saw the movie once, but rewatching that clip I noticed something that for the 1940s, is pretty damn awesome: Cap's backing guys -- his unit, I guess -- is desegrated. I don't know enough about Captain America in general to comment on how that relates to comicbook canon, but I find it pretty unlikely that WWII propaganda films would be that liberal. Integrated units were still illegal in those days and I don't think I've ever seen a British or American military information poster featuring a non-white soldier. So I'm just going to go ahead and assume that Steve Rogers specifically asked for there to be some non-white guys marching alongside him in those PSA movies because he loves freedom and hates racism. (Seriously, I can't help but be fascinated with the idea of how Steve Rogers is going to react society -- and politics -- in 21st century America, and hope that the Avengers movie at least touches on this.)

I already predict that one of my favourite things about the Avengers movie is going to be the fact that they're really public superheroes. They have government backing via SHIELD (the somewhat-shadowy agency run by Nick Fury -- AKA Samuel L. Jackson in, well, all the individual Avenger movies), but more importantly they're pretty much destined to be celebrities. None of them even have secret identities! And as team leader, it's a good thing that Steve Rogers already has some PR experience because aside from Tony Stark, who is probably a tabloid disaster in multiple countries, none of the other Avengers have ever really been on camera. Bruce Banner would be a terrible interviewee because there's the constant danger of him hulking out under the pressure and trashing the Daily Show studio, and I suspect that Black Widow would shiv any journalist who tried to press her about her personal life. 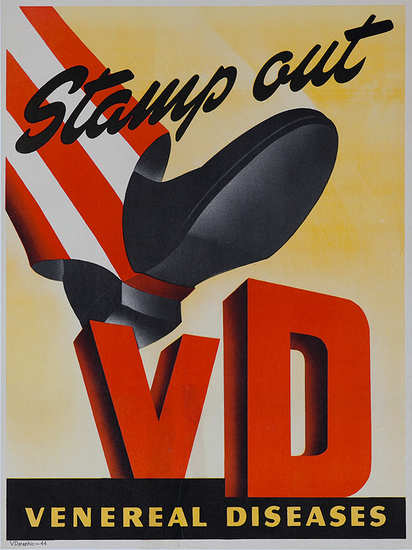 All thoughts of Avengers aside, there's one single Captain America item that I am desperately hoping exists: A venereal disease PSA. Because seriously, STDs were a big problem during Wartime! And Captain America's job was to support and educate the troops! This whole concept is so beautiful to me because a) the addition of cheesy sexual innuendo to the now-retro wonders of WWII propaganda art can only be a good thing, b) in the movie, Steve Rogers is so unsure around women that he often just blushes and stammers at them, so god only knows how he'd cope with having to sing some cheery jingle with a title like "We Can't Defeat The Axis/Without Prophylaxis", and c) you just know that Tony Stark would track that ad down and post it on Youtube.

So I ask you, comicbook fans: has this ever happened in Avengers or Captain America canon, and if not, why not? If fanartists can produce beautiful poster art such as this, then I hope to goodness that someone somewhere has devoted such attention to a similar one in which Cap urges Our Boys to avoid the dangers of syphilis. Or that there's some fanfic out there, at the very least.
Postcript: Fun fact I learned while googling 1940s venereal disease posters: Stan Lee, one of the original creaters of The Avengers comics, was employed to draw one during WWII.
Posted by Hello, Tailor at 14:23