It's a little late for a review of the Hunger Games movie itself, so in summary: I thought it was an excellent adaptation, and the few things I did have a problem with (too much exposition from the Games commentators; too many important and/or traumatising details cut from the book) were understandable for reasons of making the film accessible to a wider audience. I've had a few people ask me if I'm going to write about the costumes, and yes, I'm finally getting round to it, although you may not all agree with the result. For a film adaptation of a book that has so much to say about fashion, vanity, and the immediate visual differences between social classes, the costumes in The Hunger Games could've been a lot better. 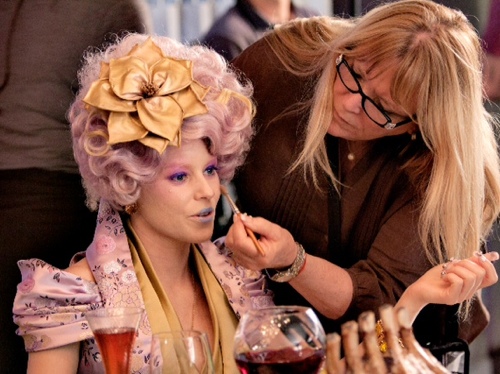 I'm not suggesting moment that the Capitol costumes didn't look fantastic. It's the background concept I have a problem with. Effie Trinket, the first person we see from the Capitol, was perfect. Her purpose is to illustrate the huge chasm between Katniss' life in the impoverished District 12, and the thoughtlessly cruel frivolity enjoyed by the people who dwell in the Capitol. Even though Effie has more contact with people from the worker districts than most Capitol citizens do, she still has very little understanding of how they live or the fact that the Capitol is so widely loathed and resented. There's no possibility of any common ground between her and a girl who has to illegally hunt with a bow and arrow in order to save her family from starvation. 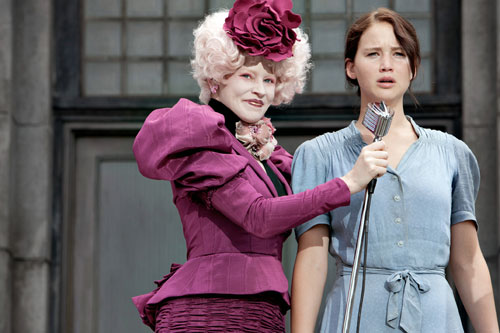 Katniss has higher priorities than caring about the way she looks. (One thing I would've appreciated in this film would've been if Katniss had actually had leg hair prior to her Capitol makeover.) She's a very angry person, raging against the Capitol and the way her friends and family are forced to live, but quiet about it because stoicism and practicality are the only way for her to survive. Effie is the polar opposite of this: superficial, thoughtless, and impractical to the degree that she can barely walk in her tight skirts and heels. 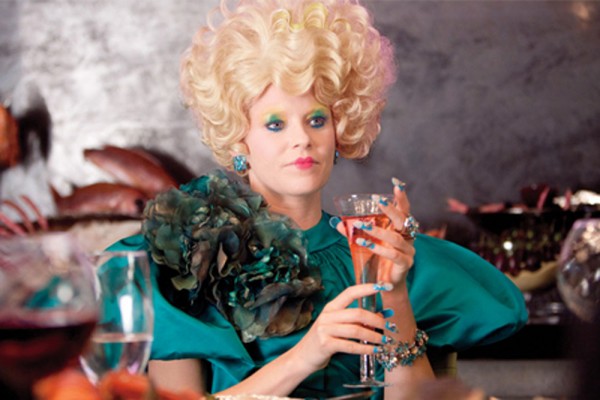 Elizabeth Banks and her costume/makeup people created a wonderfully faithful version of this character. Both visually and in terms of her performance, she embodies everything Katniss hates about the Capitol: the frothyness, the frivolity, the conspicious consumption and wastefulness. She also has a very distinctive personal style: the puffy hair, sleeves and accessories, the narrow waists of her jackets and the excessive colour-coordination. Unlike in many futuristic/sci-fi movies where people wear improbably costumes with no thought for budget or practicality, we know that Effie has a team of consultants and makeup artists to help her look that way. 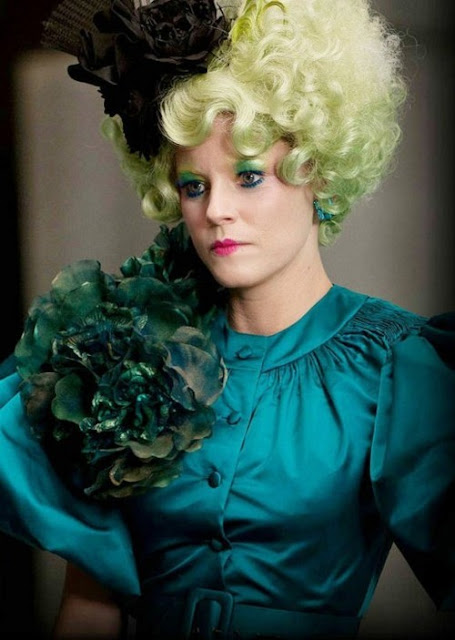 For me, the problem with the Hunger Games' costumes begins once we move past Effie Trinket and into the Capitol itself. Effie is a perfect example both of a character whose costumes fit perfectly with their personality  and lifestyle, and of a character who is image-obsessed to the detriment of everything else. Now, both from descriptions in the novels and the impression we get of the Capital in general, the appearance of other Capitol citizens should run along those lines as well: strong personal styles, coupled with extremely high-impact, high-budget clothes. The problem is that the background characters look too much like Effie Trinket. 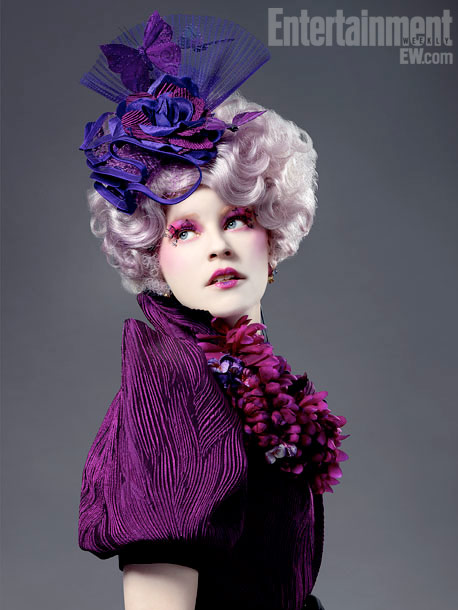 When Katniss and Peeta first enter the Capitol they experience severe culture shock, partially thanks to the outlandish appearance of its citizens. In the film, this works fairly well but only because the clothes worn by the extras and secondary characters are so colourful when compared to the muted greys and browns of District 12. However, the fundamental reason why the Capitol citizens look the way they do is because they're part of a society where people are rich, have too much time on their hands, and hugely overvalue personal appearance. Even taking into account the fact that many people are followers rather than trendsetters, the overall effect of the Capitol costumes is the assumption that colour-matching, dyed hair, puffy sleeves and narrow waists are the Capitol equivalent of jeans-and-a-t-shirt. It removes Effie Trinket's impact because it characterises her as just another slavish follower of a universal trend. 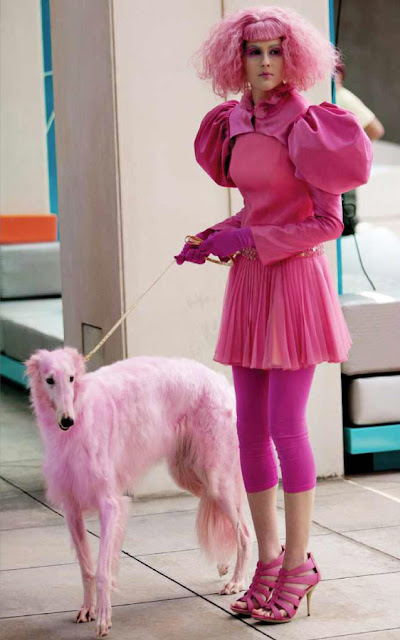 Fashion is self-expression. It may be molded by trends and designers, but in a culture where everyone has a huge amount of disposable income to spend on self-augmentation and bespoke clothes, everyone should look far more different from one another than they did here. The girl pictured above could easily be Effie Trinket 20 years ago. The woman in the picture below, with her curled and coloured hair and elaborate fascinator, could be Effie in 20 years time. Excluding the possibility that these women are both Effie Trinket fangirls, we shouldn't be seeing this type of uniformity. Take a look at any busy urban street in real life. Is every person wearing the same fashion trends? No. A hundred years they might have been, but only because clothes were far slower and more difficult to make. 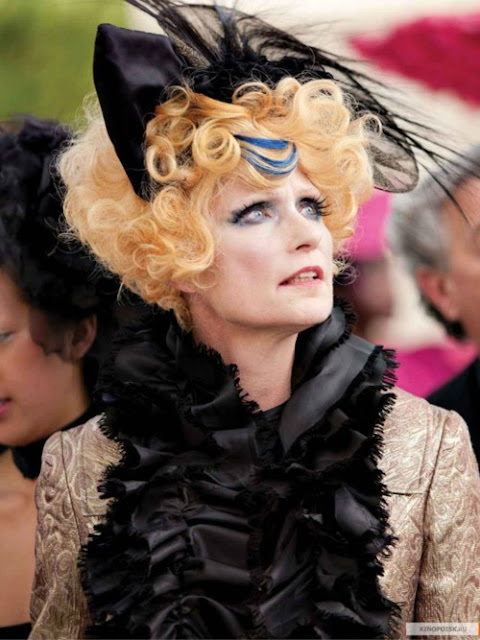 In the Capitol, outrageousness is praised and admired. This isn't a world of high-end couture fans whose style is dictated by Fashion Week; a far better analogy would be the urban tribes of the Harajuku district in Tokyo. The Harajuku kids dressing in Lolita, Visual Kei and Club Kid styles identify with those subcultures and put a lot of time and effort into the way they look, as should the people of the Capitol. The Capitol may be isolated from the outside influences that inspire new social/fashion trends in real-life cities, but the Capitol's constant obsession with public image, stylists and reality TV should outweigh that purely because there would be so many competing designers. But despite the extravagance of what we see in the Capitol scenes, there's very little sense that these people are setting out to express their own individuality. 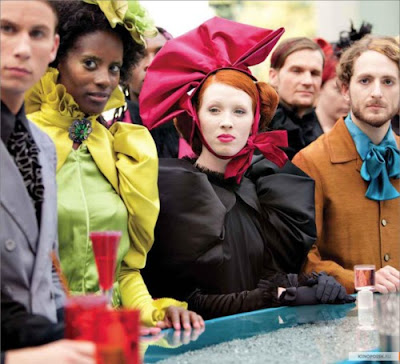 Several reviews namechecked Lady Gaga because she's the current buzzword for over-the-top dressing, but Capitol fashions only reach the level Gaga maintains for a casual trip to the airport or a baseball game, not the full-on meat dress extravaganza she puts on for major events. In the third Hunger Games book, there's a shop that caters to people who take on animal characteristics, the owner herself having had her body augmented to look like a tiger. This is a weird example even by Capitol standards, but when do we see anything even approaching this in the movie? Where's the extreme plastic surgery? Where are the facial tattoos and metal flesh inlays described in the book? Why are all the women so feminine, and the men dressed in some version of a suit? Where are the goths? Where are the people whose fashion identity is tied up in some other subculture, like medical fetishism, or sportswear, or plant-matter, or faux poverty? Because you know that in a priveleged yet socially ignorant culture like this, there will be people who ape the poorer the Districts by doing something like dressing in stylised rags. 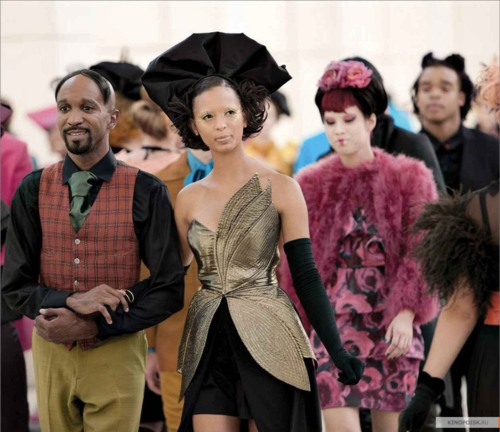 When choosing extras for the background scenes in the Capitol, they might have been better off doing an open casting call for fans wearing what they thought of as Capitol fashions. Or giving a bunch of money to some of the more out-there Etsy designers or Camden Market/Harajuku clothing companies, so as to come up with a more disparate selection of "weird" styles. Hopefully in the later movies we'll see a wider variety of extremes instead of this single overarching theme of brightly-coloured formalwear.

Grey, by Jon Armstrong -- Like The Hunger Games, this novel takes place in a very priveleged and image-obsessed city, although this time round the protagonist is from the Capitol. It's a great portrayal of extreme subcultures and reality TV/internet fandom, the main character being an obsessive fan of grey suits, intense minimalism, and a "competitive ironer" who is famous for ironing shirts in a particularly sharp manner.
Posted by Hello, Tailor at 10:09